The iPod shuffle, um, shuffled off this mortal coil back in 2017, thanks largely to the trend towards music streaming over downloading. However, the real cost was the portability and freedom from smartphone internet while out running or simply relaxing.

However, since then, the Mighty MP3 player has attempted to fill the shuffle’s shoes with its matchbox-sized music player that syncs directly to the user’s Spotify Premium account. Mighty has enough storage for 1,000 songs or podcasts synced over Wi-Fi from your smartphone. The on-device buttons make it possible to skip between playlists and albums stored locally.

However, the first-gen product had its limitations; including spotty Bluetooth connections to wireless headphones. Now the company is back with a new version, the Mighty Vibe, which fixes that ill and also boosts battery life by an hour.

Bluetooth now works at up to 20 feet, which is fine for a device that’s designed to clip to users’ clothing, while battery life can now last for up to five hours. The device still has that chunkier plastic design, which comes in black, blue and red. However, the design is a far cry from the metallic and sleek designs offered by the latter-get clip-on iPod shuffles.

However, for those seeking to get away from the constant prodding of screens with sweaty fingers and persistent smartphone notifications while out on a run, it could be the perfect replacement for that ageing or dearly departed iPod shuffle. 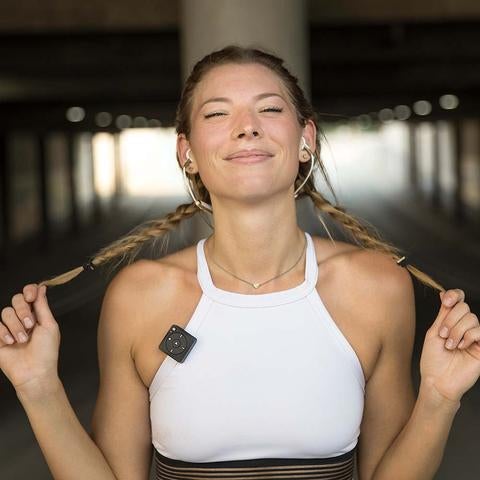 The new Mighty Vibe costs $86 and comes with a redesigned app offering faster operation. The company told TechCrunch more streaming services beyond Spotify will become compatible next year. One slight sticking point for those iPod shuffle fans though… the Mighty isn’t actually capable of shuffling any songs.

Does the Mighty Vibe sound like the perfect replacement for your iPod shuffle? Let us know at TrustedReviews on Twitter.