A number of Hollywood’s biggest players, including Amazon, Netflix, and Disney, are suing the company behind Kodi-powered streaming device TickBox TV – with potentially millions at stake in damages.

The lawsuit was first spotted by THR and was filed in a California federal court, with Warner Bros, Universal, 20th Century Fox, Columbia Pictures and Paramount Pictures also among the heavy hitters accusing Georgia-based TickBox of copyright infringement.

In the complaint, the Hollywood studios – all of which are founding members of the ACE anti-piracy group – claim that TickBox’s marketing and instructional materials promote the service as a way to access copyrighted content for free.

TorrentFreak has published a full copy of the filing here.

Related: What is Kodi and is Kodi legal?

“TickBox promotes the use of TickBox TV for overwhelmingly, if not exclusively, infringing purposes, and that is how its customers use TickBox TV. TickBox advertises TickBox TV as a substitute for authorized and legitimate distribution channels such as cable television or video-on-demand services like Amazon Prime and Netflix.

“The TickBox TV instructional video urges the customer to use the ‘Select Your Theme’ button on the start-up menu for downloading addons. The ‘Themes’ are curated collections of popular addons that link to unauthorized streams of motion pictures and television shows.

“Some of the most popular addons currently distributed — which are available through TickBox TV — are titled ‘Elysium,’ ‘Bob,’ and ‘Covenant’.”

Do they have a point? You decide… 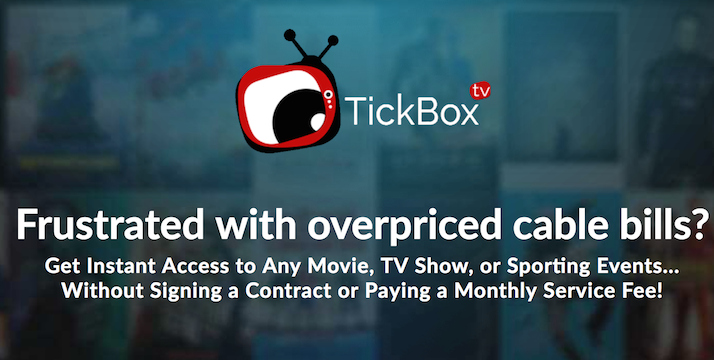 The lawsuit is demanding an immediate halt to sales of TickBox TV set-top boxes, as well as substantial compensation for the studios affected. The Hollywood firms are requesting the maximum $150,000 per infringement in damages, meaning an eventual judgement (or settlement) will likely run into the millions.

TickBox, for its part, is strenuously denying the allegations. It says that its Kodi-powered Android TV device is “100% legal” as it does not directly host or download content.

“TickBox TV is legal. It does not archive, host, store or distribute any kind of media or content. Tickbox TV is only a directory or library of content which is hosted by third parties on the internet. It does not download anything. Tickbox TV does not condone parties who pirate or download copyrighted media and this box is not to be used for such purposes.”

What’s interesting here is that the lawsuit appears to represent the first legal judgement regarding so-called ‘Kodi boxes’ in the United States.

UK sellers of set-top boxes featuring the (wholly legal) Kodi software have already fallen foul of the courts as a result of augmenting the core Android TV hardware with piracy-enabling add-ons. Similarly, a recent European Court of Justice ruling extended EU copyright protection laws to include content streamed over multimedia players like Kodi.

As it stands, the third-party streaming space remains one of the internet’s biggest grey areas. Our advice remains that if something seems too good to be true (like seeing still-in-cinemas Thor:Ragnarok available to stream), it probably is and you should steer clear of clicking dubious links.

How this lawsuit plays out in the US, though, could have a massive bearing on the future of streaming boxes. Watch this space, fellow cord-cutters.