You can officially experience 5G in the UK, with EE rolling out the country’s first 5G network on May 30th. But is 5G really any faster than 4G?

The simple answer to that is ‘yes’, and by a considerable margin. But the actual difference is still a little murky.

For one thing, 5G is only just starting to roll out around the developed world. For another, it’s not going to reach its full speed potential for a good while yet.

Add in the fact that there are already advanced forms of 4G that bolster traditional network speeds beyond what most of us are accustomed to, and you’ll hopefully understand why the lines appear so blurry right now.

So how much faster is 5G than 4G? The commonly accepted line here is that 5G is capable of providing speeds that exceed 4G by anything from a factor of 10 to a factor of 100.

This is made under the presumption that standard 4G can hit download speeds of around 100Mbps, while 5G in its current form could potentially hit 1000Mbps (1Gbps). Ultimately, that speed is expected to grow to 10Gbps and beyond.

The reason for this vagueness is the fluid definition of 5G itself, and the fact that it will utilise a number of different frequencies over its lifespan. 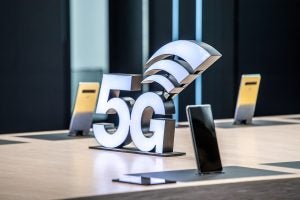 At present, 4G in the UK utilises a range of congested frequencies between 800MHz and 2600GHz. Initial 5G network rollouts will utilise some of this and the slightly higher 3.4 to 3.8GHz bands. But this doesn’t represent 5G’s full speed potential.

Download speeds of 10Gbps will only occur when so-called millimetre wave (also known as mmWave) comes into play. These much higher frequencies operate between 30GHz and 300GHz, which is the space between microwave and infrared waves.

The extra bandwidth available at these frequencies will enable those predicted speeds of 10Gbps and above. However, the narrow wavelength of mmWaves will necessitate additional infrastructure in the form of lots of small emitters dotted all over street furniture and buildings, which is why we’re not likely to see such elevated 5G performance for a few years yet.

All of which begs the question: how fast is 5G compared to 4G right now?

It’s early days for 5G, of course, and we’ll have to wait for the full adoption of mmWave frequencies in this country for it to reach its full potential.

While we found that the speed varied significantly across central London, the new 5G network maintained a healthy gap to 4G at almost all times. 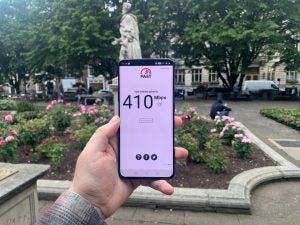 During our tests, we managed to record 5G speeds of 120Mbps inside the shopping centre surrounding Canary Wharf station, compared to 30Mbps for 4G in the same area. That’s four times faster for the new network, though neither ‘G’ is exactly breaking down walls here.

When taken to Covent Garden, we were able to double those 5G speeds to 240Mbps, compared to 37Mbps for 4G. That’s more than six times faster from 5G.

The fastest 5G speeds we managed to get occurred on Golden Square, Soho, where we got around 410Mbps. However, it’s worth noting that 4G is also very strong in this location, with recorded speeds of up to 250Mbps. This means that the new network provided around a 60% speed improvement.

Even in these early days of 5G, then, it’s providing a healthy boost in speed over 4G. If we’re taking regular 4G speeds to be around the 100Mbps mark, then we’re already seeing the potential for a four times increase with initial 5G technology.

That gap is only going to grow as the fifth generation network stretches its legs over the coming years.