After spending plenty of time with both the iPhone 12 and iPhone 12 Pro, we’re now in a position to pit Apple’s two new devices up against each other to help you decide which is the one to pick. This is the definitive iPhone 12 vs iPhone 12 Pro guide.

Long gone are the days when Apple simply released a single phone. Now we have four very distinct models, including the tiny iPhone 12 Mini, a more traditional iPhone 12 and a duo of iPhone 12 Pro models.

Here we’re focusing on the iPhone 12 and iPhone 12 Pro, comparing the handsets to see what the differences are and which is right for you.

The iPhone 12 Pro has more base storage

First, let’s start with storage. If you plump for the iPhone 12 then base storage starts at 64GB, with higher options up to 256GB available at a premium. 64GB feels a little stingy these days, with the majority of Android devices shipping with 128GB at the least, and often offering expandable storage.

Pick up the iPhone 12 Pro and you get 128GB of storage, up from both the iPhone 12 and iPhone 11 Pro. You can also get the Pro models in sizes up to 512GB – ideal if you like storing lots of content on your device.

Apple has improved the display on the non-Pro models this year, ditching LCD in favour of OLED across the board. That means whichever iPhone 12 you plump for, it will display superior colours, perfect blacks and more vivid colours.

Both the iPhone 12 and iPhone 12 Pro should offer superior colour reproduction and they also boast the XDR branding. The iPhone 12 has a far sharper resolution than the iPhone 11 and it now matches the Pro when it comes to pixel count.

There’s HDR support across the board, too, with a peak brightness of 1200 nits. The only notable difference between these two displays is that the iPhone 12 Pro can get slightly brighter, by about 200 nits, in regular use.

Not that you’ll notice a huge amount of difference unless you have both phones next to each other – although the marginally brighter screen does make whiter backgrounds look a little less grey.

Apple has finally overhauled the design of its iPhone, ditching the iPhone X look we’ve had for a number of years now. These new models sport a look that’s not too dissimilar to the iPad Pro, and they’re certainly inspired by the iconic iPhone 5.

The phone’s sides are flat (rather than rounded) and the back is smooth. The notch remains on the display, housing all the elements of the Face ID sensor. The Pro is made of slightly higher-quality materials, with stainless steel sides as opposed to aluminium. Both phones are also the exact same size, so if you buy a case for one then it will fit just fine on the other. If you want the lighter phone, opt for the iPhone 12. 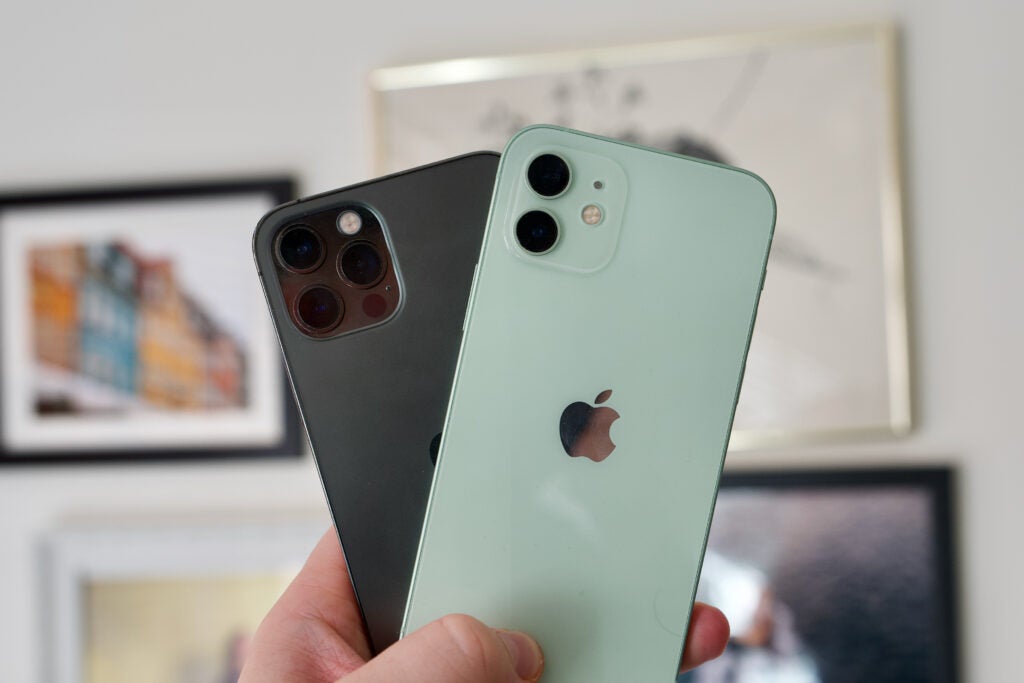 Both phones offer water-resistance, a Lightning port for charging (still no USB-C here) but lack previously included accessories such as a charger plug and EarPods. You do still get the Lightning cable, though. They also both support the new MagSafe wireless charging tech.

One of the big new features for this whole range of iPhones is support for 5G. The 5G networks have been live across most major carriers in the UK and the USA for about a year now, so it’s good to see Apple finally adding 5G to its phones.

You don’t need to splash out for the Pro models to get 5G, since all new models support the tech. The iPhone 12s also run on the A14 Bionic 5nm chipset, which is supremely nippy and efficient. These are easily two of the fastest phones around.

One difference between the two models is that, according to Geekbench 5, the Pro model has 6GB of RAM, as opposed to the 4GB on the iPhone 12. We haven’t noticed a benefit of this extra memory so far; however, it might help out down the line. 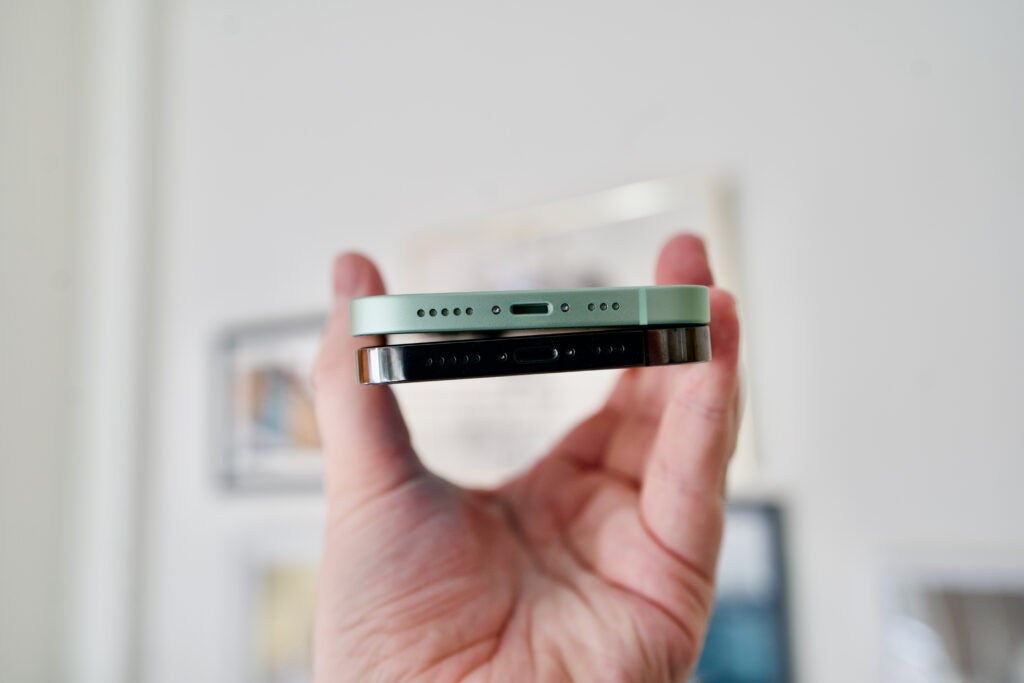 The most obvious difference between these two handsets are the camera arrays.

The iPhone 12 has two rear-facing cameras, wide and ultra-wide, while the Pro has three: wide, ultra-wide and tele. The Pro also has a LiDAR sensor, which noticeably improves low-light image capture since it allows for portraits and far quicker focusing.

There’s a new 12-megapixel main f/1.6 sensor across the board, with that faster aperture allowing more light in for brighter shots and video. Night mode is also available in the ultra-wide mode.

Pictures from the main cameras are virtually indistinguishable (hardly a surprise when the sensor is the same), and the same goes for those taken with the ultra-wide unit. If you value zoom, though, then it’s worth plumping for the Pro model as the 52mm tele lens lets you get closer to a subject without sacrificing too much detail. As mentioned above, it’s a lot better for low-light shooting, too. 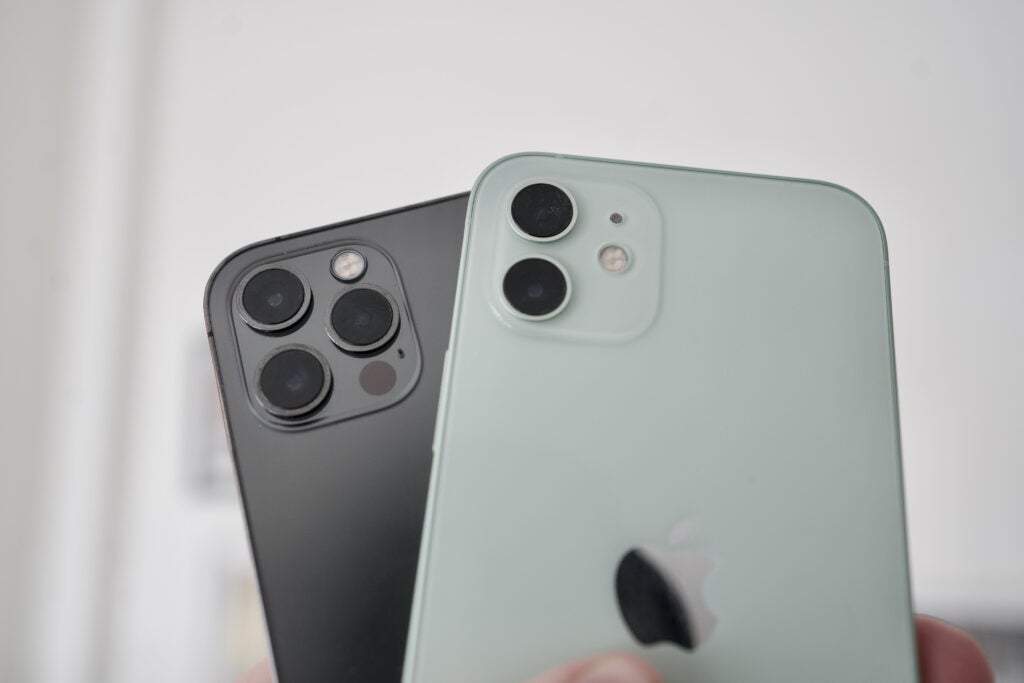 Selfies from the front camera are identical and both models can shoot video in Dolby Vision HDR. However, the 12 Pro model can shoot this very bright and colourful footage in 4K 60fps, whereas the iPhone 12 caps out at 4K 30fps.

Another benefit coming solely to the Pro line is Apple’s Pro Raw format, although we don’t know too much about this yet.

Both come in a variety of colours

Both lines are available in a selection of hues.  The iPhone 12 Pro comes in blue (replacing the green from last year), gold, silver and graphite. These have a matte back and really quite shiny, highly polished sides.

The iPhone 12 has a glossier back, and is available in red, white, blue, black and green. The iPhone 12 colours are a little more playful and softer, with a wider variety.

If you’re choosing between the 6.1-inch version of both then your choice really comes down to a few things. For £200/$200 more, you’re getting more storage and RAM, an extra zoom camera, improved low-light photos, a classier stainless steel design and a slightly brighter screen.

Features such as general performance, battery life, screen resolution are identical on both phones, so it’s really only a bunch of more luxurious extras that set the Pro model apart.