A month after Apple unveiled the iPhone XS, iPhone XS Max and iPhone XR, the Cupertino-based company is back with another event. This time taking place in Brooklyn, the keynote saw the arrival of new iPad Pros and a new MacBook Air.

Apple last updated its iPads Pros in June 2017, giving them 120Hz displays and slicker designs. That’s a long time ago in tech so it’s nice to see new iPad Pros appear ahead of the Christmas rush.

The 2018 iPad Pro is one of the biggest redesigns in the Apple tablet’s history, thinning the bezel surrounding the display and rounding off the edges a bit more.

Gone is the home button and Touch ID fingerprint sensor, just like on the recent iPhones, replaced by the Face ID facial recognition. Unlike with the iPhone XS, XS Max and XR though, the Face ID system here works both in portrait and landscape orientation.

Even though Face ID makes it debut on an iPad, there’s no notch jutting into the display here. Instead Apple clearly has enough room in the remaining bezel to fit in the required camera, flood illuminator and IR sensors.

Aside from unlocking the new iPad Pro, the sensors used for Face ID also enable Animoji and Memoji in iMessage. These are augmented reality emojis that turn your facial animations into things like dinosaurs and pigs.

Other big changes to the design include a switch to USB-C rather than Lightning and no headphone jack.

Switching to USB-C is a massive boon. It’s the first time Apple has used the connectivity on any of its iOS devices. Not only does USB-C mean you’ll be able to charge the new iPad Pro with the same plug and cable as a MacBook (or any number of Android phones) but it’ll also let you output 4K video and use it as an output device for charging other things. Hopefully we’ll see this come to iPhones next year.

After Apple ditched the headphone jack on the iPhones a couple of years back it was only a matter of time before before it was axed from the iPad too. The 3.5mm survived the cull on the iPad Pro 2017, but for the 2018 iPad Pro you’ll have to make do with a 3.5mm adaptor or Bluetooth.

Magnets now sit around the iPad Pro and this lets you attach the new Apple Pencil 2 and new Folio Smart Keyboard. Previously you’d have to plug the Pencil into the Lightning port and attach the keyboard via the Smart Connector – which now seems to have been killed completely.

The 10.5-inch model has been replaced with an 11-inch model that has the same footprint as the outgoing model. The 12.9-inch model remains, but it’s now in a smaller body. Apple said the new iPad Pro 12.9-inch ‘has 25% less volume than before’.

Both the 2018 and 2017 iPad Pros feature a 120Hz refresh rate on the display (Apple calls this ProMotion), along with wide DCI-P3 colour. Support for HDR content was not mentioned. 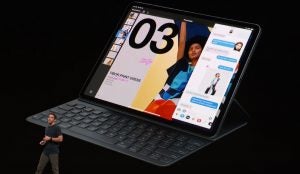 LCD remains the screen type choice for the new iPad Pro and Apple is using the same ‘Liquid Retina’ moniker first introduced with the iPhone XR. Like the XR, the iPad Pro 2018 uses anti-aliasing and pixel-mapping to ensure the curved corners of the display are accurately represented.

Powering the iPad Pro 2018 is a variation of the A12 Bionic chip you’ll find in the iPhone XS, iPhone XS Max and iPhone XR. It’s called the A12X Bionic  and it has been constructed with a 7nm architecture for improved efficiency and performance. Apple said its new chips have 10 billion transistors, offer 35% better single-core and 90% better multi-core performance.

What makes this chip special for the iPad is a new graphics chip that’ll help the tablet appeal to creative professionals and those looking at turning the iPad into their main computer. The A12X Bionic offers 2x the performance of the A10X and Apple said it can offer similar graphics to an Xbox One S.

As is typical with Apple there was no mention of the amount of RAM. 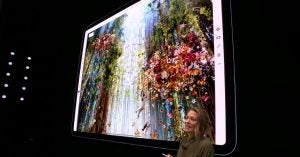 Inside the iPad Pro 2017 the grunt is provided by the A10X chip (alongside the M10 coprocessor) and that is paired with 4GB RAM. We’ve been using the iPad Pro 10.5 2017 on a daily basis since launch and to this day it still stands up as a very fast device that’ll comfortably handle anything that can be thrown at it.

Four speakers sit around the device, just like they did on the 2017 iPad Pro. However now they offer wide stereo audio and include both a tweeter and a woofer.

Stay tuned to Trusted Reviews for full reviews of the new iPad Pro in the coming weeks.