Huawei is already working on new versions of its Watch GT smartwatch, according to reports on Friday.

The Chinese company only launched the Huawei Watch GT in November last year (and February in the US), but WinFuture has spied two new versions of the device.

The Huawei Watch GT Active (pictured below) and the Huawei Watch GT Elegant feature the same 1.39-inch AMOLED touchscreen, according to the report, while the Active seems to offer slightly a different bezel design.

The site has the names, pricing details, and an image of one of the new watches, but has nothing on the internal specs or release date. According to the report, the Active Model will be 249 euros (around £191), while the Elegant will be 229 euros (around £175). 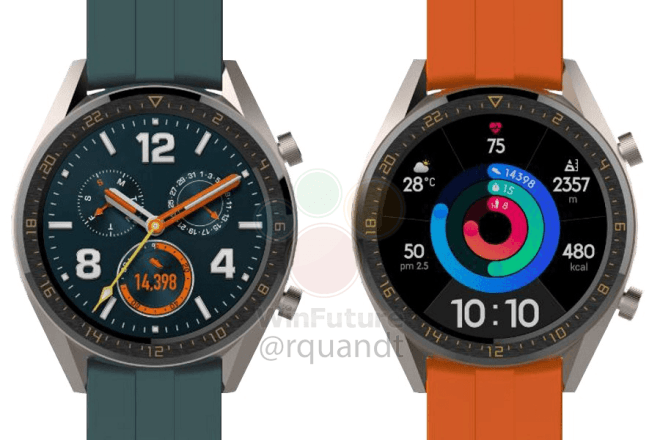 The original version of the Watch cost 199 euros (£199), so perhaps we can expect some improvements here, either in design materials or other internal features. The names floated suggest both a more rugged device – perhaps with improved waterproofing – and a more stylish version of the device.

Speaking of the original, it offered the Huawei Lite OS rather than Google’s wearOS and the image published today suggests nothing has changed in this regard. The original also offered GPS and an entire month of battery life from a single charge.

In our review, we praised that battery life, the attractive design and solid fitness tracking, but complained of the lack of smart functionality and its inability to sync with popular fitness apps.

In his verdict, Alastair Stevenson wrote: “If you want a decent-looking fitness tracker that you can wear outside the gym, too, then you could do a lot worse than the Huawei Watch GT. This is one of the more attractive trackers on the market for £200, and comes with all the sensors and hardware most semi-serious athletes will need to monitor performance. The Huawei Watch GT is a competent fitness tracker but sub-par smartwatch.”

Would you be interested in an enhanced version of the Huawei Watch GT? Let us know @TrustedReviews on Twitter.