The HTC One M8 dual sensor rear camera has been tipped yet again before the phone officially launches on March 25.

We’d be extremely surprised if the All New HTC One launches without a dual sensor after the sheer numbers of leaks emerging over the last few months.

The latest leak comes from notorious tech tipster @evleaks, which released a close up shot of the HTC One 2’s dual sensor rear camera.

“Up close with the HTC M8 cameras,” came the evleaks tweet.

As before, you can see a twin set of camera sensors adorning the rear of the HTC One 2. The larger sensor, below, is tipped to offer the same 4-megapixel UltraPixel resolution as the HTC One.

However, this will be coupled with a smaller 2-megapixel UltraPixel sensor above it in order to allow users to customise the background of their photographs via a special built-in app.

It also looks like HTC will employ a dual LED flash with its 2014 flagship. Similar to the True Tone flash in the iPhone 5S, it seems the HTC One 2 will have a white and an amber LED to make images look more natural.

HTC itself teased the dual sensor camera of the HTC One 2 in a picture released earlier this week.

Behind the launch date of March 25 were six images all showing a pair of subjects, including running dogs, trees and cheeky giraffes.

The image was coupled with the Twitter caption: “On March 25th, life will become twice as beautiful.”

Read more: HTC One 2 M8 camera explained: Is it just a gimmick? 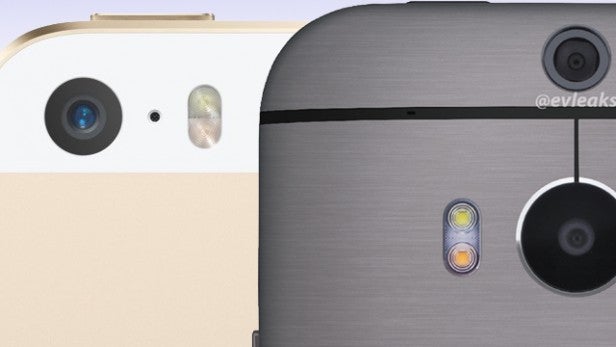