HTC has released a new teaser image that suggests the All New HTC One M8 will feature a dual sensor rear camera.

Ahead of the March 25 launch event, HTC has released a teaser picture via the company’s official Twitter feed.

Behind the date is a group of six images all featuring a pair of items, whether than be dogs, coffees or a kissing couple. The company also paired the image with a caption directing referencing that the All New HTC One would be “twice” the phone of its predecessor.

All the rumours, leaked images and videos we’ve seen so far point to the All New HTC One featuring a dual-sensor rear UltraPixel camera.

This teaser picture certainly indicates that this will definitely be a feature of the HTC One successor.

Selfridges has been adorned with a new All New HTC One poster with the phrase “Feel it” coupled with the launch date of March 25.

The shiny, metallic silver background on the poster combined with the HTC One 2 teaser trailer released earlier this week, suggests that the next flagship will retain the premium build of the HTC One with its aircraft grade aluminium uni-body.

TrustedReviews will be at the All New HTC One London launch on March 25 to bring you all the news as it happens.

Read more: HTC One 2 M8 camera explained: Is it just a gimmick? 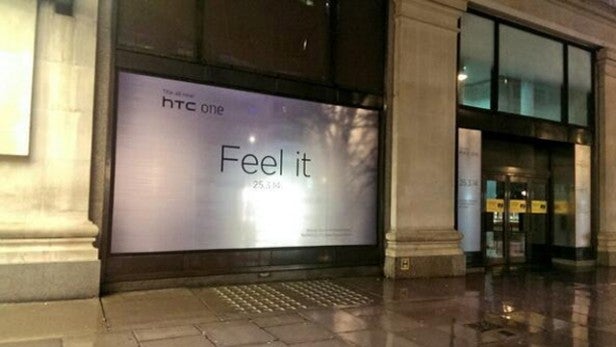