But GTFO is a co-op shooter that delights in making a complete mess of your plans. You can try and learn its maps, and you can try and memorise where enemies will come from and where you’ll find the equipment you need to stay alive.

We’ve seen this before with Left for Dead with the random emergence of its more powerful enemies, but GTFO takes this unpredictability a step further by changing numerous elements about its maps, from enemy placements, to the location of ammo caches, to which doors you can and can’t proceed through in any given mission.

All of this meant that when I took on a mission myself with a trio of the developers from 10 Chambers Collective (which, incidentally, is a third of the tiny nine person team), they had little in the way of special insight to be able to cheat us to the end of the mission. 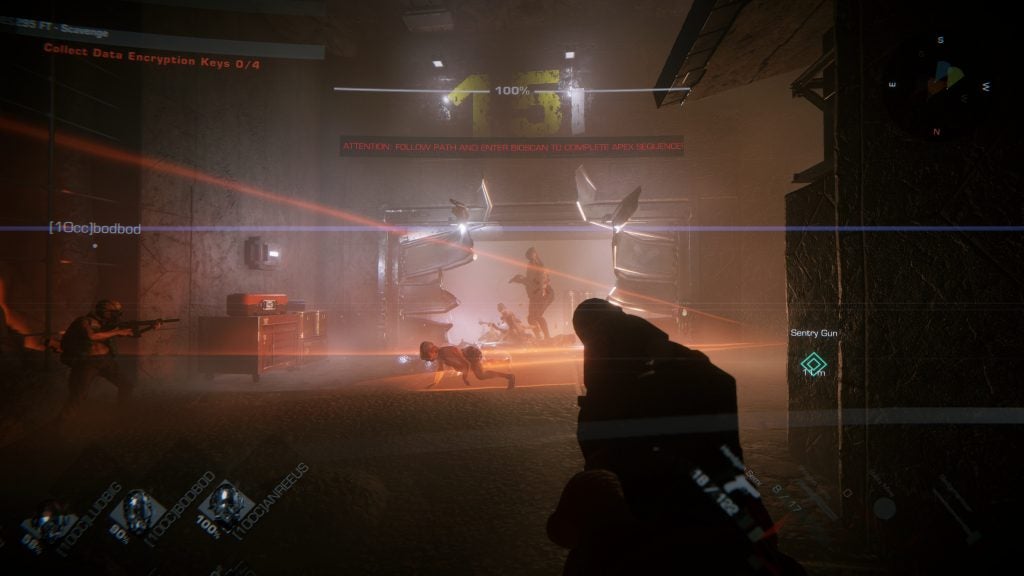 GTFO sees you and up to three other players exploring dimly lit underground facilities, completing objectives and generally doing your best to not be scared witless by enemies that are perfectly happy to emerge at the worst possible moment.

There aren’t any classes in the game, but before you embark upon a mission (10 Chambers calls them expeditions), you’ll pick a loadout consisting of primary, secondary, and melee weapons, and one special item which can range from a glue gun that’ll stick enemies in place, to mapping devices, sentry guns, and trip mines.

Then before you know it you’re plummeting into the depths of the game’s subterranean facility, read to find what’s in store.

GTFO Gameplay — We try it out for ourselves

When we got off the lift our objective was given as simply to ‘Find Area 24’. GTFO isn’t a game obsessed with leading you by the hand to find each objective, instead you have to read the environment to work out where you need to go. 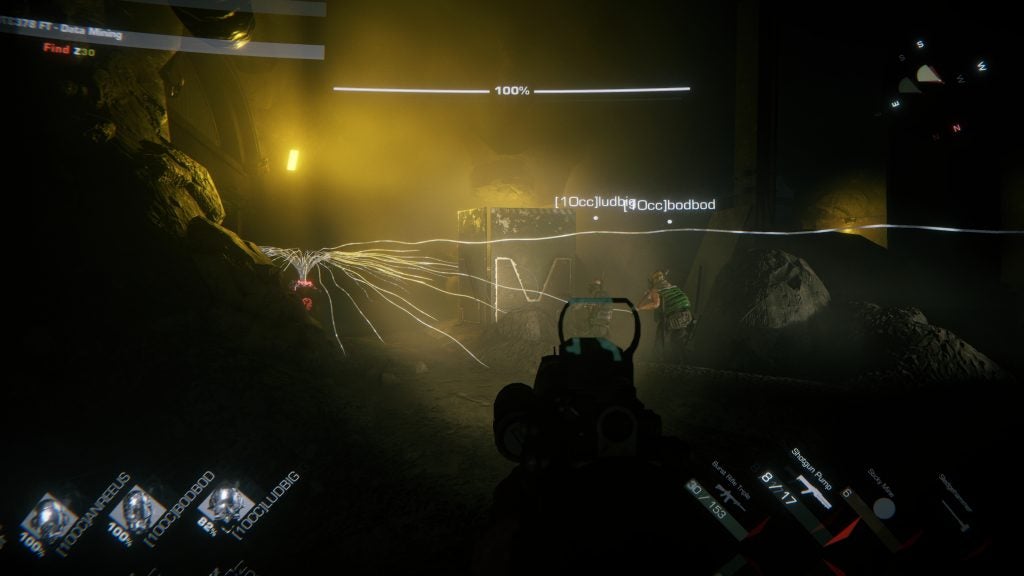 Thankfully, pretty soon we started to notice large signs on the wall saying that we were currently in Area 26, and quickly we found a door with a big ‘Area 25’ label on it, so we were pretty sure we were headed in the right direction.

However, it wasn’t quite as simple as opening every door we came across. When entering a room, there’s an equal chance it might be empty or otherwise filled to the brim with enemies.

Thankfully our team came prepared, with one of our members equipped with a special skill that allowed him to scan for enemies hidden behind objects. Think of it as being like the tracker from Alien, but a lot more useful, and advanced enough to save you a jump scare rather than create one.

We crept through our first few rooms, silently taking out our demonic enemies as they slumbered, until we came across our first computer terminal of the session. 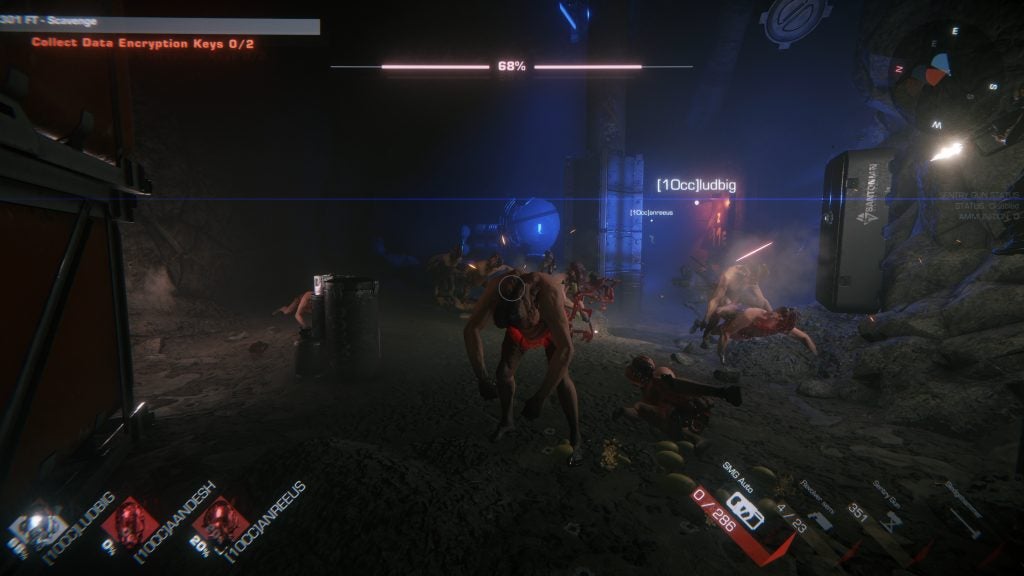 These regularly placed terminals are one of GTFO’s more intriguing gameplay innovations, which you’ll occasionally need to use to open locked doors or lockers. It all sounds fairly standard, until you realise that these terminals are accessed using a command line that you’ll literally need to control by typing commands on your keyboard much like Quadrilateral Cowboy.

It sounds awesome, and it absolutely is. Because the commands you’ll need to enter are pretty lengthy, you’ll generally have to leave someone positioned at the door that needs to be opened, where they can then read out the instruction to the terminal operater elsewhere in the level to ‘locate blue_key_873’ or ‘unlock door_445’ on the terminal.

The commands are involved enough that it’s difficult to type them quickly during a combat encounter, and there’s also enormous scope for building in secret commands for people determined to find secret solutions to the mission’s puzzles.

Smaller weapons and health caches were opened by completing simpler puzzles, but it was the terminal puzzles that really resonated with me. 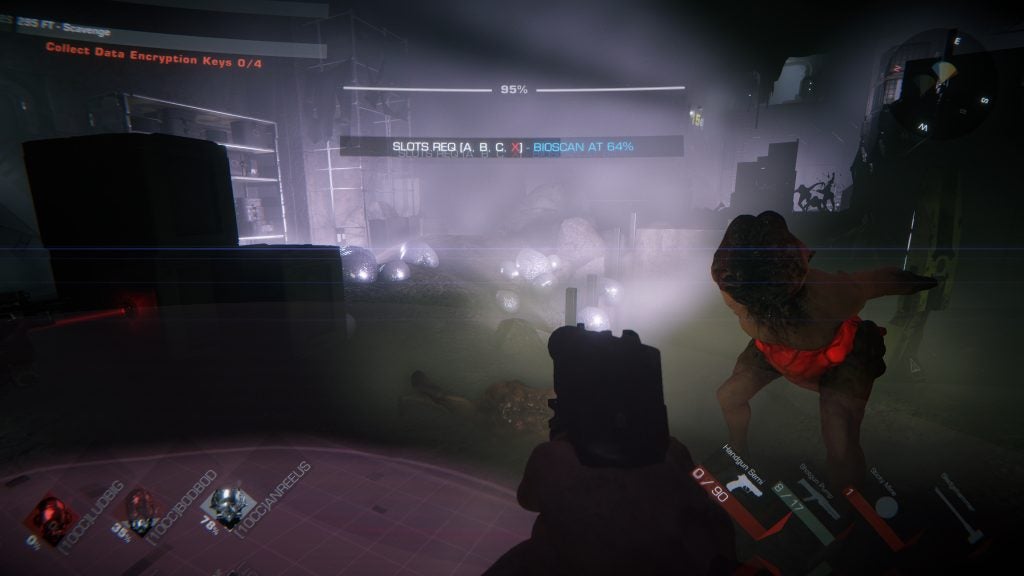 There are no classes in GTFO, but I joked that if someone put enough time in then they could make themselves a completely organic ‘hacker’ class.

After unlocking a door using a key hacked from a locker, we came to what the team calls an ‘Apex door’, which is a door you’ll need to complete a specific task to proceed through.

If the terminals are designed to split teams apart, then the puzzle we were given was designed to cramp us in together by forcing us to stand together within a series of circles and fight off waves of enemies.

When the enemies appeared, they were a typical monstrous affair. The regular grunts, or ‘split-faces’ as the team tend to refer to them as, will run at you without much strategy, while ‘scouts’ come equipped with massive tendrils that they’ll use to discover you and alert the hordes. 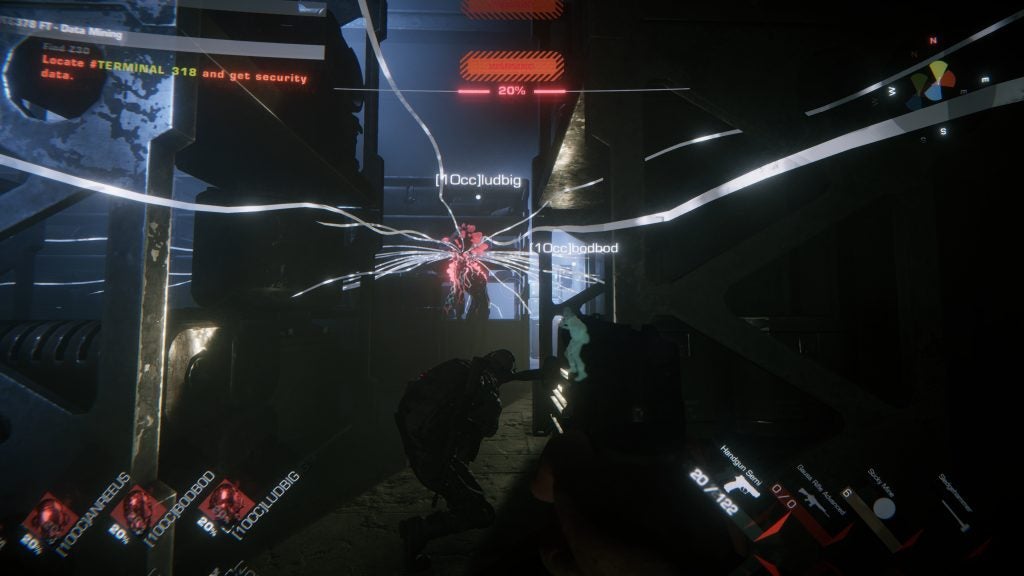 Forcing our group into a tight spot was unfortunately a little bit too much for us to handle on the show floor at E3, and no amount of glue sprayed on the floor of the level was going to hold back the quantity of enemies we were dealing with.

One by one we dropped like flies, too preoccupied with not dying ourselves to even think about reviving each other. We never did get to complete our final objective.

We’ve been shooting zombies in cooperatively focused campaigns since Left for Dead popularised the genre a decade ago, but GTFO has two things going for it.

First is its unpredictability, both with its level design and how its enemies will spawn and behave. The team were genuinely surprised by the playthrough we had, and if there ends up as being as much variety in how the levels look as there is with how they play, then GTFO could end up having a lot of replayability.

Second is those damn computer terminals. I loved them, and I really hope 10 Chambers Collective gets enough time to build plenty of functionality in for those who want to seek it out. They’ve already been talking about using them to operate machinery or turn lights on and off, and I hope there’s plenty more to discover.

The team is targeting a 2018 release and we’ll be very interested to hear more.