The news broke on Thursday when the company shared two promotional images on Chinese social media site Weibo. The launch is currently only confirmed for China.

The company has release other products, like the Amazfit Pace in markets outside China in the past so we’re expecting a wider launch to follow in the near future.

Details about the new smartwatch are thin on the ground, though it will reportedly offer a few improvements on the original. The biggest of these will be the use of a more powerful Qualcomm Wear 3100 chipset and e-sim support.

Outside of this the Amazfit Verge 2 is expected to feature the same portfolio of fitness tracking features as the original. These include the ability to monitor a variety of different workouts, GPS connectivity, heart rate monitoring and NFC.

Pricing for the new Amazfit Verge 2 hasn’t been revealed but Huami products are traditionally cheap. The original Amazfit Verge retailed for CNY 800 (roughly £90).

The news follows a wider growth of parent company Xiaomi in the wearables market. Research from the International Data Corporation published last we reported that Xiaomi is quickly catching up to Apple as the world’s most popular wearable manufacturer.

The growth was reportedly led by the popularity of its Mii Band line of wearables. The research suggested Xiaomi shipped over six million wearables this quarter including five million of the Xiaomi Mi Band. This reportedly meant the company sold a slither more “wrist wearables” than Apple.

Read our review of the Apple Watch 4 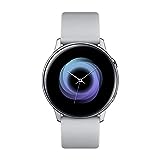 A stunning wearable, the Samsung smart watch is also feature packed, complete with all the essential sport tracking functionalities, as well as notifications right at your wrist.

Despite Xiaomi’s growth Apple is expected to maintain an overall lead in the wearables market in the immediate future thanks to the popularity of it’s Airpods 2 true-wireless earphones.