What is the Amazfit Pace?

Those after GPS in a wearable will usually have to spend a little extra for the privilege. Not so with the Amazfit Pace, which at around £80 comes in way below the cost of similarly equipped rivals. Alongside GPS, you also get some basic smartwatch features and fitness tracking.

Many of its features aren’t quite as refined as those on competing running watches, nor does the Amazfit Pace have some of the more advanced capabilities seen elsewhere. But, considering its price, it does a decent job if you want a GPS running watch that won’t break the bank.

The Amazfit Pace opts for a circular watch design, finished with a glossy ceramic bezel. The bezel surround is relatively thick, leaving a 1.34-inch display. Like the Moto 360, it has a ‘flat tyre’ at the base of the screen, where the ambient light sensor resides.

This flat-tyre effect isn’t as noticeable as it is on the Moto 360, owing to the much lower-quality display. It has a 320 x 300 resolution and uses an always-on transflective LCD panel. It isn’t particularly vibrant and the backlight makes it appear incredibly washed out and dull, with a blueish tint. 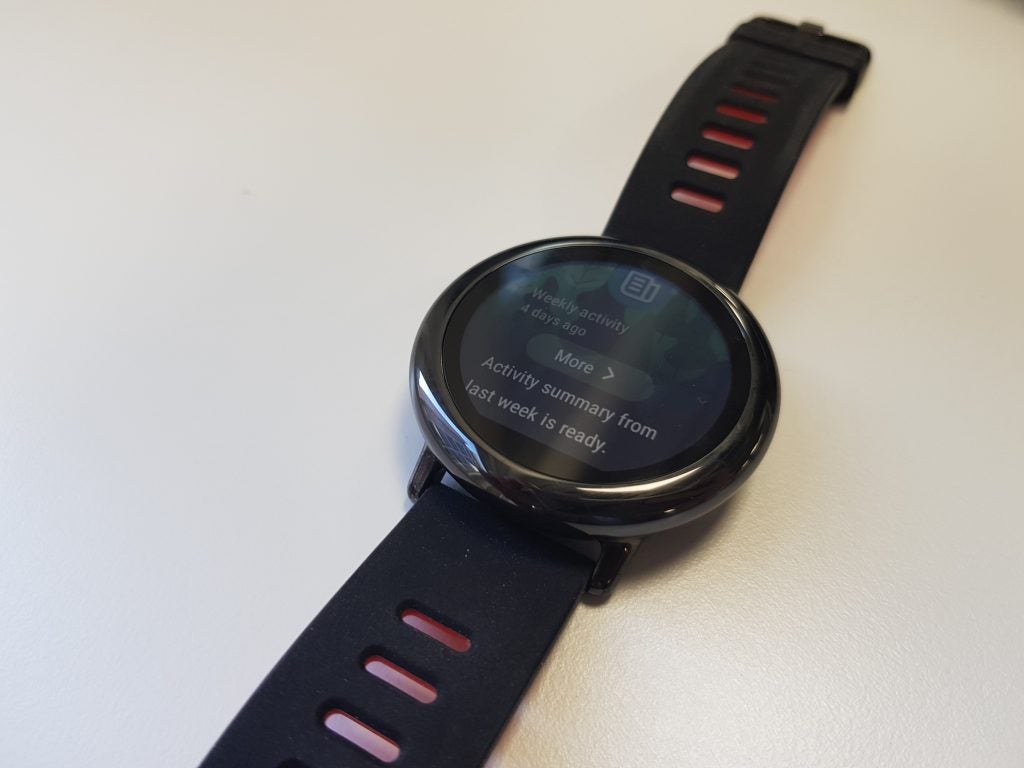 The automatic brightness adjustment is also pretty substandard, often not dialling up the brightness as much as the moment requires. So much so that I just used fixed brightness.

It also has a habit of turning on when you’re in bed, momentarily blinding you unless you turn off the ‘activate on wrist gesture’ option. The panel isn’t the easiest to view outdoors either, especially at a glance whilst running.

Having an always-on display is welcome, at least. It means you’ll have the time and other complications displayed at all times. You can choose different watch faces in the companion app. 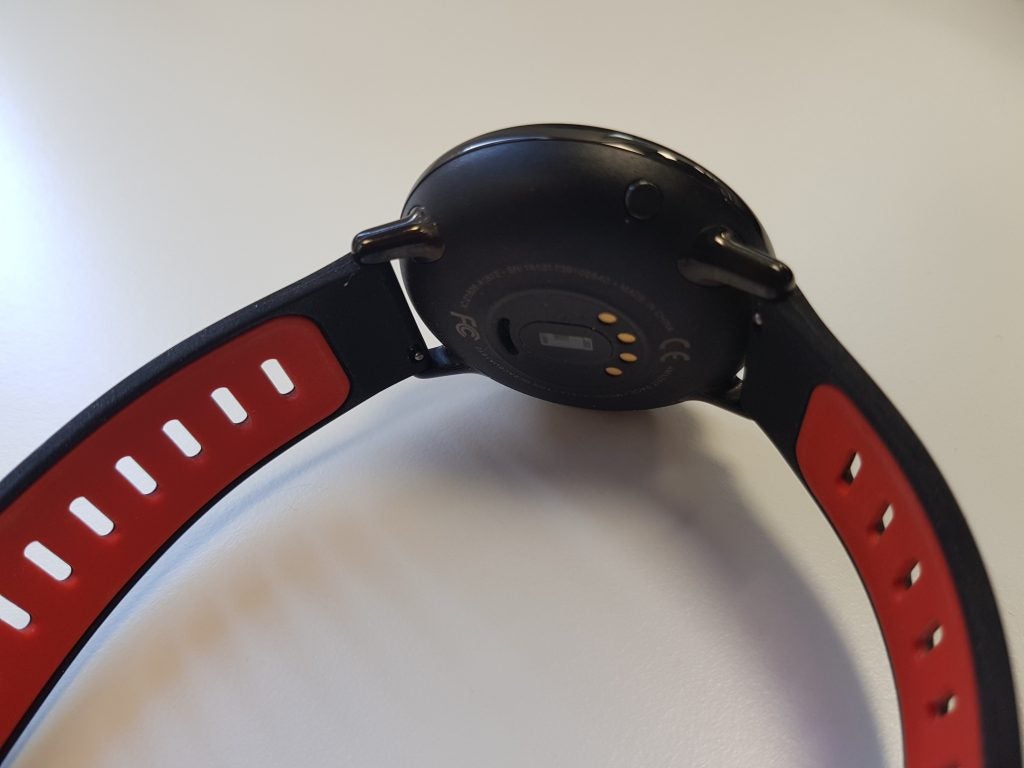 Along the edge of the watch casing is an important little button  – one that you need to press before you can use the touchscreen. Not only is this annoying, it’s counter to every other smartwatch that wakes up when you rotate your wrist or just touch the display.

On receiving a smartphone message, your first reaction will be to swipe at the screen. However, on the Amazfit Pace this won’t do anything until you hit that fiddly button. I wish there was an option to turn this off. There’s a ‘tap to wake’ option in the menu, but this doesn’t seem to do anything, regardless of how I toggle it.

The Amazfit Pace is reasonably thick, but it hides it well thanks to a lot of tapering at the edges. It also doesn’t feel heavy on your wrist at 54.5g. The Pace will accept any standard 22mm watch strap, but it comes with a comfortable silicone set of straps in the box. They’re black to match the watch front, with a red underside. 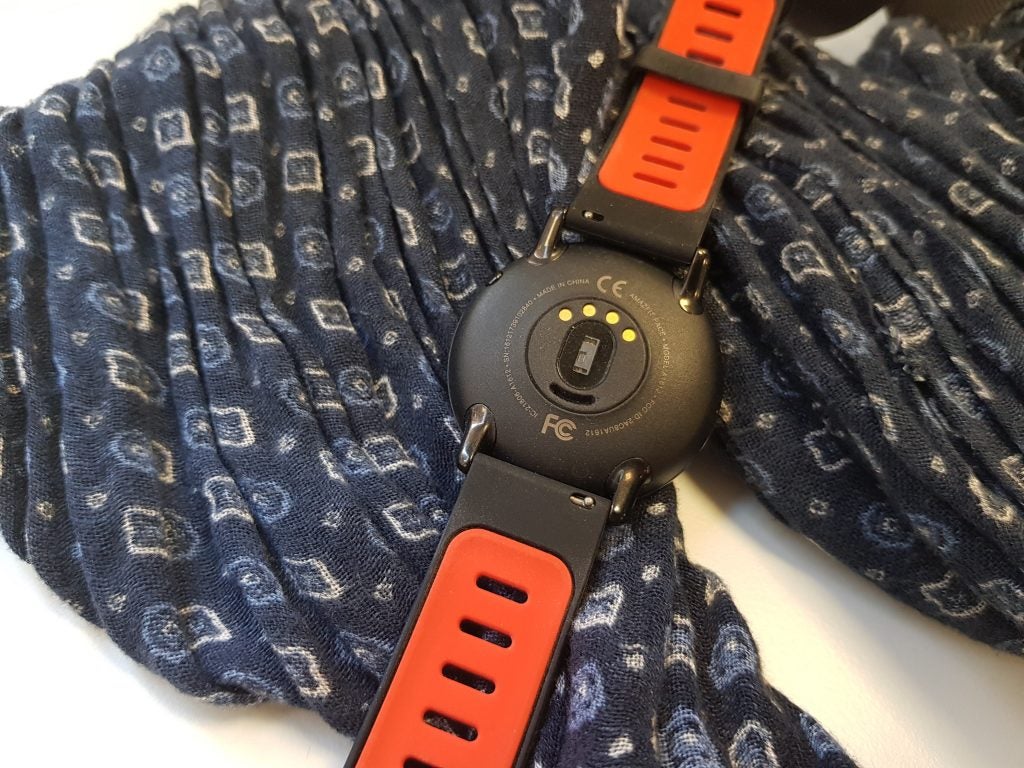 Rated to IP67 water-resistance, the watch is perfectly safe to shower with – always handy, even it lacks swim-tracking functionality. On the back you’ll find its optical heart rate monitor, which benefits from those tapered edges as it concentrates the contact with your skin somewhat.

Inside the Amazfit Pace is a 1.2GHz processor alongside 512MB of memory. These are joined with both Bluetooth 4.0 and Wi-Fi, the latter letting you connect to a wireless network and update the watch’s firmware. There’s also 4GB of onboard storage for music.

These all work together to make the Pace’s operating system run relatively smoothly. You can swipe left from the watch face to access other basic apps such as the weather and stopwatch, get an overview of your activity so far, access sleep data, and use the remote music controls. A swipe right brings quick access to tracking workouts. 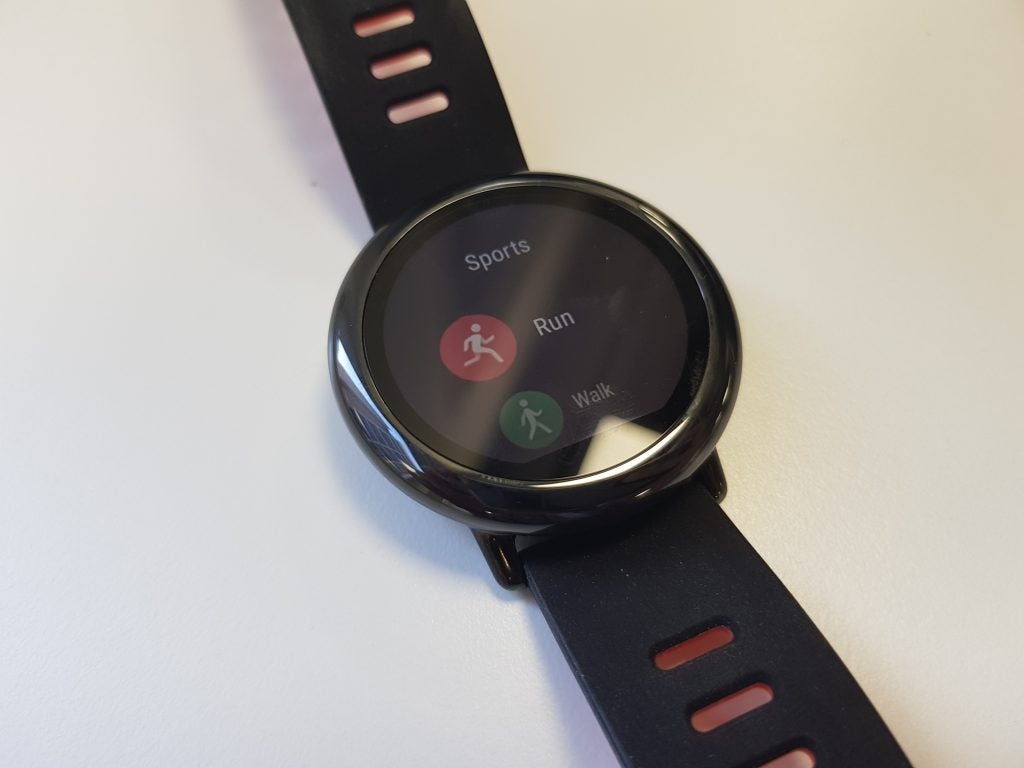 Overall, it all feels fairly intuitive and not too different from the experience of other smartwatches. However, there are some oddities that make it feel less refined.

For example, some of the messages – such as move reminders or notifications from your paired smartphone – display strange word wrapping. Words will cut off midway at the edge of the screen and carry over onto a new line. 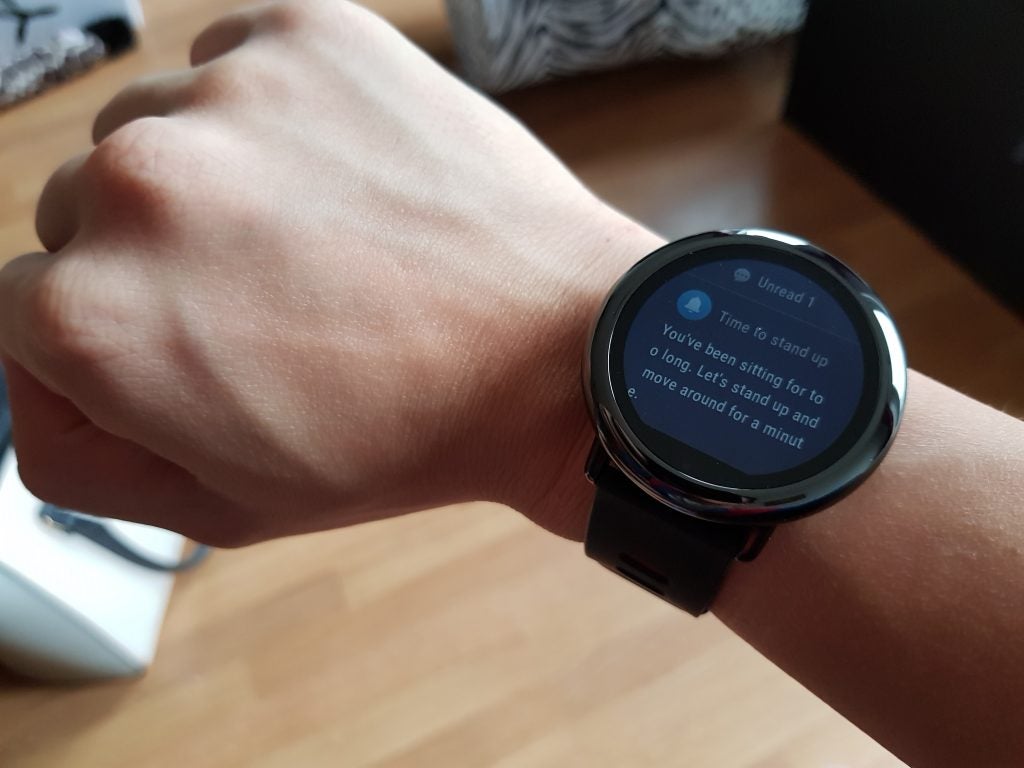 On the fitness side, though, the Pace does everything you’d expect including step counting, sleep tracking and resting heart rate measurements throughout the day. The sleep tracking is pretty basic, measuring duration of sleep and time spent in light and deep stages.

The real draw of the Amazfit Pace is its GPS and GLONASS tracking for runs and bike rides. In testing this worked well, matching the distance of an Apple Watch Series 3 carried alongside. The display also shows all of the desired data points, such as your pace, distance, heart rate and time. Again, the issue is having to wake up the Pace via pressing that hard-to-find button when you want to interact with the watch, especially is outdoor visibility is poor.

You can view back your running data in the Amazfit app as well as exporting it to Strava, if that’s your preferred platform.

Heart rate readings during exercise were generally on point in terms of the overall pattern, although the Pace tended to put my maximum heart rate above that of an Apple Watch 3 and dedicated Polar OH1 HRM.

I found battery life was around four days of standard use, including about an hour of GPS tracking during that period, which is respectable. You can expect it to last a little longer without GPS engaged. Charging the Amazfit Pace is via a proprietary cradle that clips onto the back of the device. It feels a little flimsy and a touch difficult to fix in place, but once it’s on there isn’t any concern over it becoming dislodged.

Why buy the Amazfit Pace? 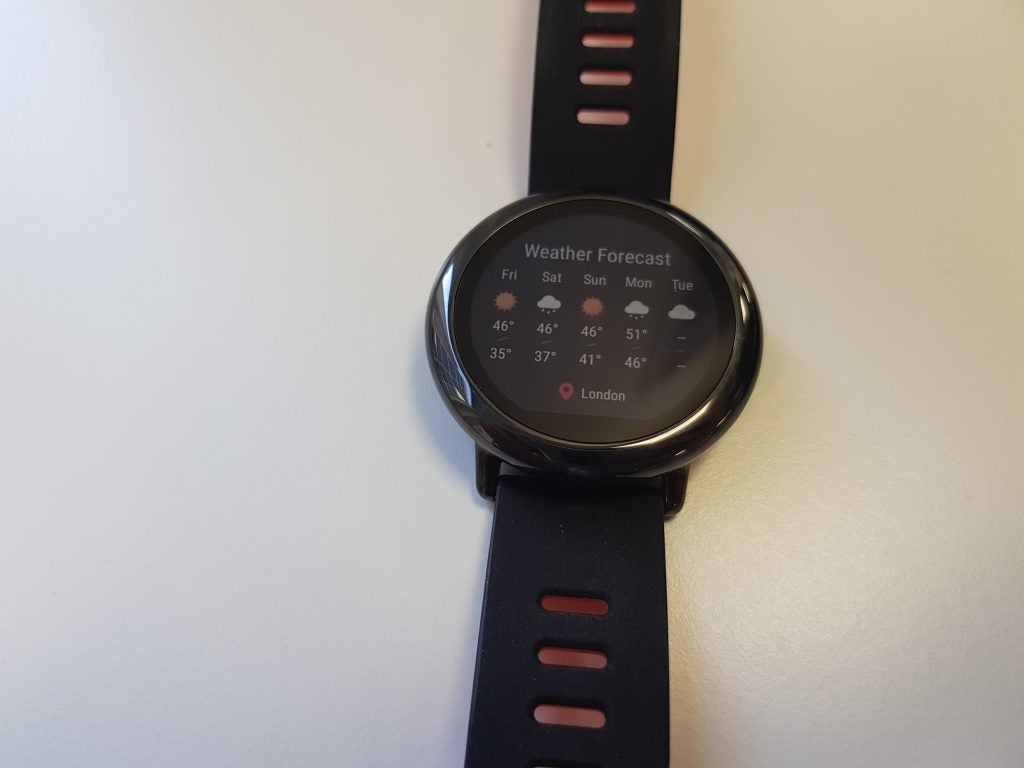 If you haven’t much money to spend on a GPS running watch, the Amazfit Pace isn’t the worst choice on the market. There are some shortcomings and a lack of gloss, but it does a decent job overall.

For those whose budget will extend a little further, I’d recommend the entry-level TomTom Spark 3, which offers a more fully featured, refined running watch experience.

Thanks to GearBest for the review sample.

A budget-friendly GPS running watch that covers the basics.