Each year, the Detroit Auto Show showcases a bevy of new cars and other automobiles to provide a taste of what the year ahead has to offer petrolheads and driving enthusiasts. We round-up the best cars and concepts from the North American International Auto Show 2018 (NAIAS).

As a greater number of vehicles arrive with semi-autonomous driver aids to fully self-driving systems, cars and technology are getting ever closer together – and this year’s Detroit Auto Show serves as a good example of that.

Some of these cars are mere concept machines, offering a tantalising glimpse of the future, while others show exactly what to expect from 2018 and 2019’s automotive lineups. We’ve narrowed down some of the best cars from the show.

You’re just as likely to spot the G-Class outside a swanky London city hotel as you are off-road in the Scottish Highlands. And at first glance, 2018’s G-Class in no different. 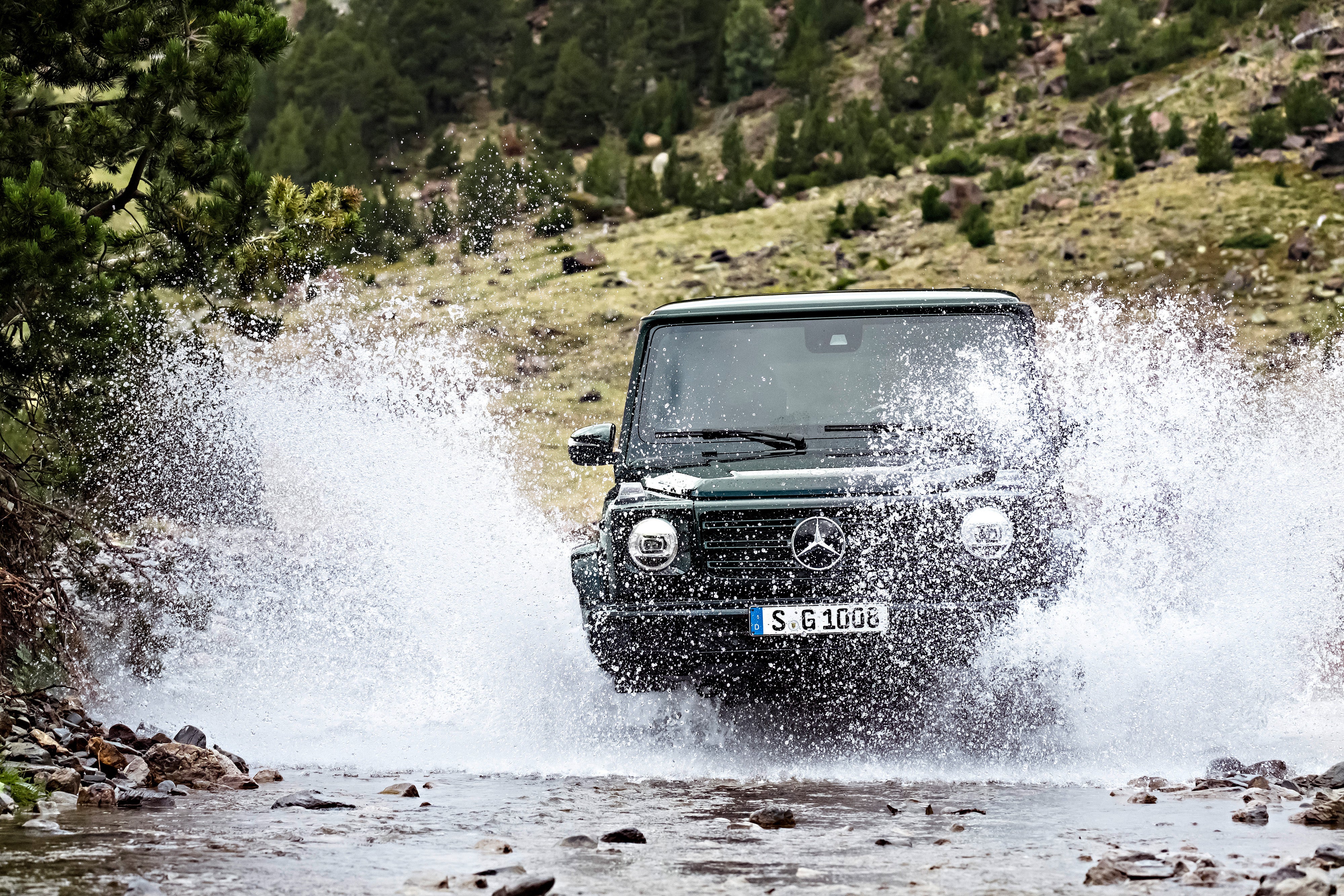 The SUV has benefitted from a few nips and tucks, and now offers better performance and handling, while still retaining its signature brutish look.

But peer inside and you’ll be greeted by not only a sumptuous and spacious cabin, but a rather futuristic infotainment setup. This  comprises two TFT displays sat behind a single pane of glass, seemingly merging the digital dashboard and central infotainment cluster.

It uses machine learning to pick up on the setting a driver prefers, and serves up suggestions and settings for them. A smart voice-controlled virtual assistant – which acts a little like Siri but is built for Mercedes – responds to commands such as “Hey Mercedes, I’m cold” by turning up the heat in the cabin, rather than needing a specific present command. 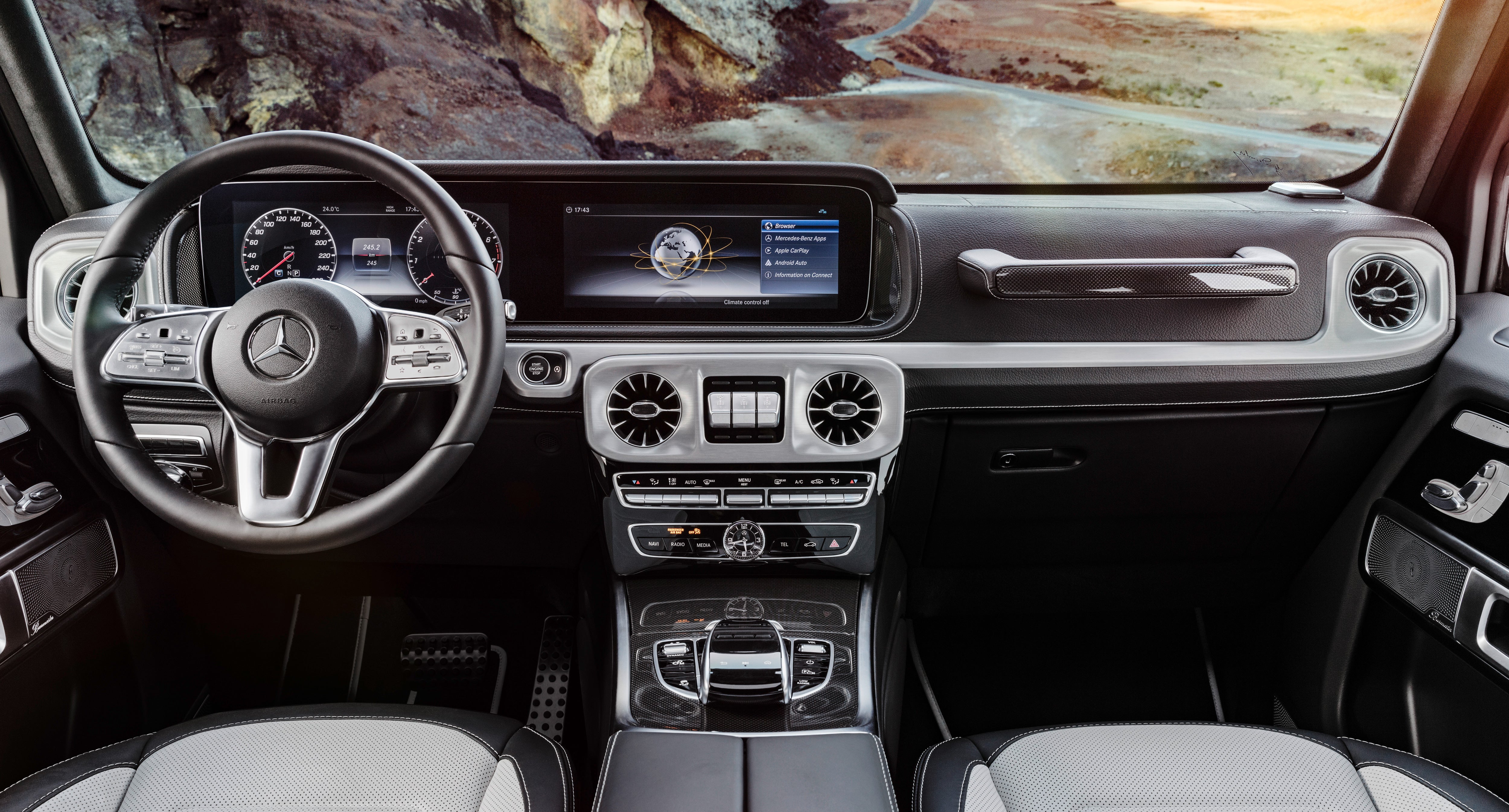 The level of technology in an utilitarian SUV is impressive, and MBUX is set to feature in other 2018 Mercedes vehicles too. It looks like the German car maker has some serious technology to go alongside its automotive heritage.

The Mustang Bullitt was spotted back in December 2017, but Ford has now officially unveiled the limited edition variant of the Mustang GT.

Drawing inspiration from the iconic Highland Green Mustang GT in the 1970 Steve McQueen movie Bullitt, the new Mustang loses some of the fussy finishes of the original car and instead sports some subtle chrome accents and aluminium wheels. 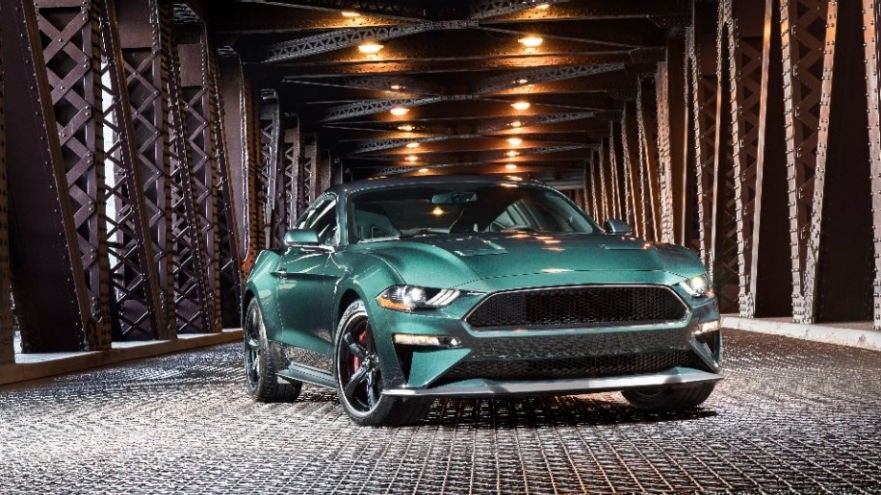 Slightly boosted performance and handling offer up a better driving experience for those motorists keen to work the manual gearbox to get the most out of the growling V8 muscle car.

While the new car isn’t a tech showcase, the Mustang Bullitt still features a 12-inch LCD panel in the infotainment unit, complete with a custom launch screen to add the finishing touches to the limited edition car, which should make its way over to the UK.

Sticking with Ford, the car maker showed off the 2019 Ranger pick-up truck, which hasn’t been updated since 2011.

The new Ranger is a typical rough and ready truck that comes with a 2.3-litre version of Ford’s EcoBoost engine and a ten-speed automatic transmission. 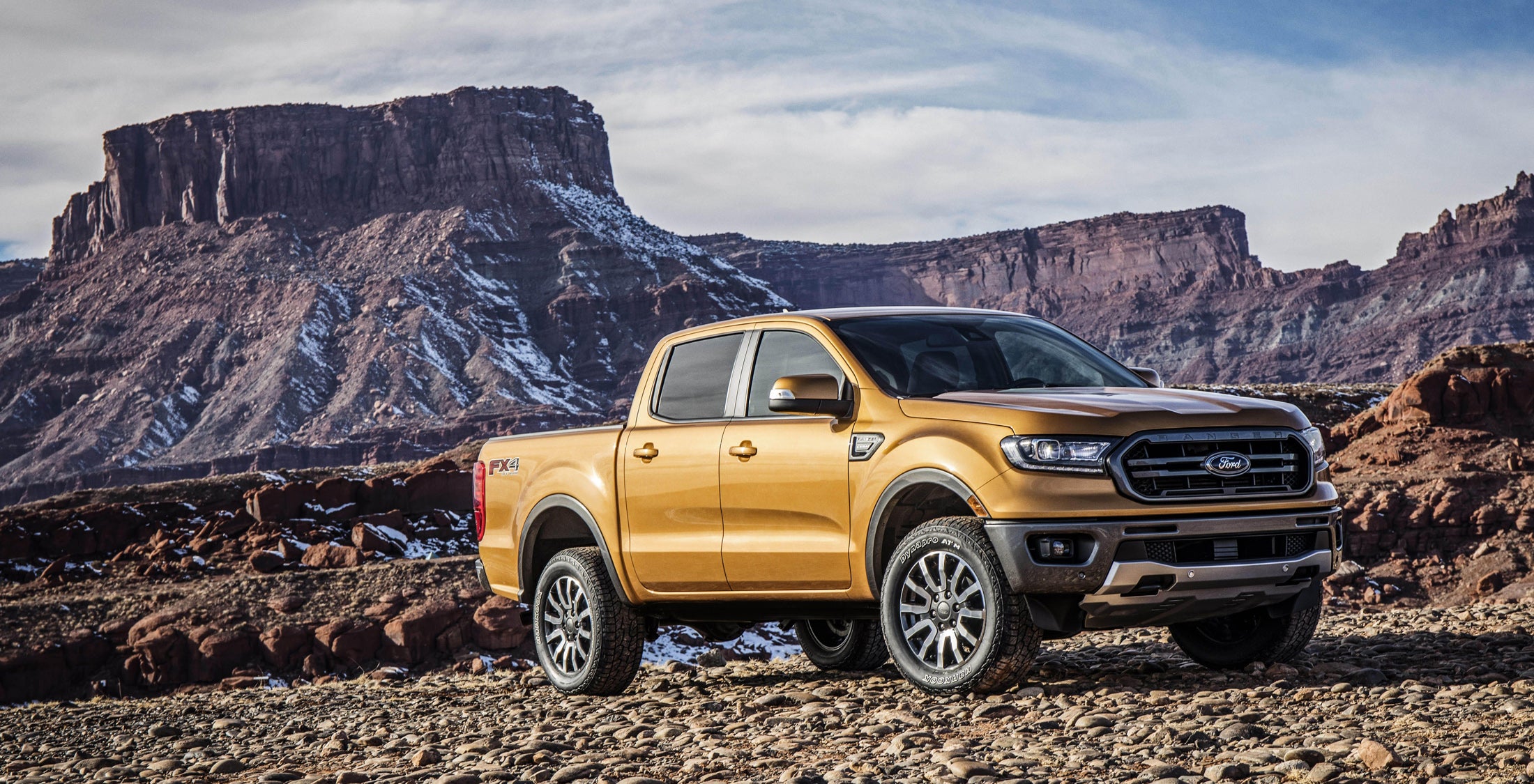 There isn’t much on the new Ranger’s power or performance, but we do know that it will feature Ford’s latest Sync 3 infotainment system alongside a digital dash.

A host of smart driver-assistance technology is also on offer, too, such as adaptive cruise control and blind spot monitoring.

The 2019 Ranger is a solid example of the integration of cars and technology, especially when features such as virtual assistants seen in the latest smartphones and home gadgets are now finding their way into cars.

BMW appears to be having a more sedate Detroit Auto Show this year, with the German car maker simply taking the covers off the X2 SUV, which will hit markets in spring. Bringing a new compact crossover to Beemer’s ‘X’ lineup of SUV, the X2 has a sporty look with sharp intake, dual exhaust tailpipes, and some sleek lines that hint at smoothing airflow over the vehicle’s body.

Its 2.0-litre engine kicks out 228bhp and 258lb ft of torque to help make the diminutive SUV pretty nippy. An eight-speed automatic transmission takes care of the gear changes and helps the X2 get from 0-60mph in 6.3 seconds. It will come in several models after the xDrive28i launches in March.

On the tech side, things appear low-key. The dashboard is clear but fairly plain, and a small display sits above a cluster of traditional buttons and dials to take care of infotainment duties; it isn’t exactly cutting-edge. 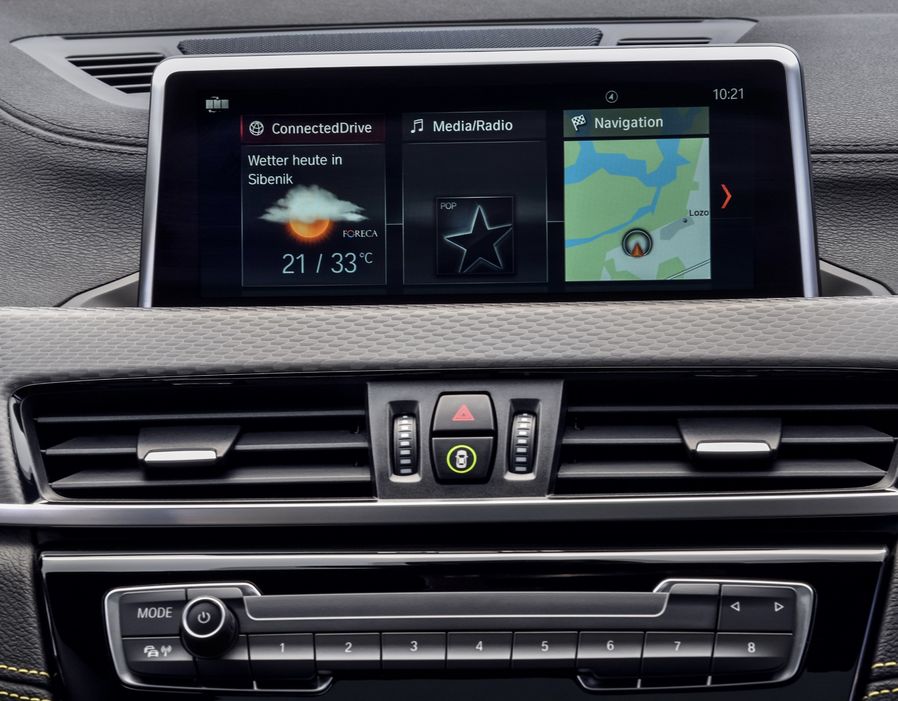 But BMW has a reputation for using solid and surprisingly deep infotainment units, so while the X2 may not appear to be that well equipped, it’s likely to offer plenty of features behind a few layers of menus that drivers can tap into.

While the Lexus LF-1 Limited isn’t a car that we’re likely to see on roads anytime soon, the concept vehicle hints at the future direction of Lexus vehicles. 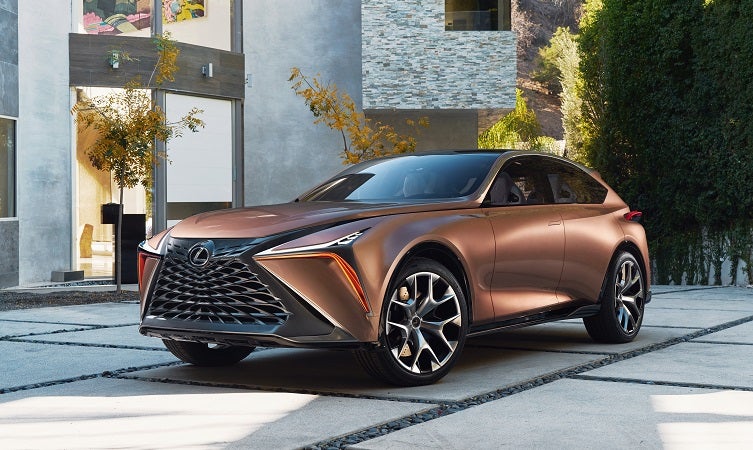 The angular and aggressively styled compact crossover concept naturally has autonomous driving features – as one would expect in most cars designed to showcase the future of the automotive world. But it’s the tech in the cabin that’s the real draw.

The car has a digital dashboard, which is flanked by two smaller screens that act as displays for feeds from side-mounted cameras; these replace the wing mirrors. In the centre sits an angular infotainment display unit to handle everything from navigation to in-car entertainment. 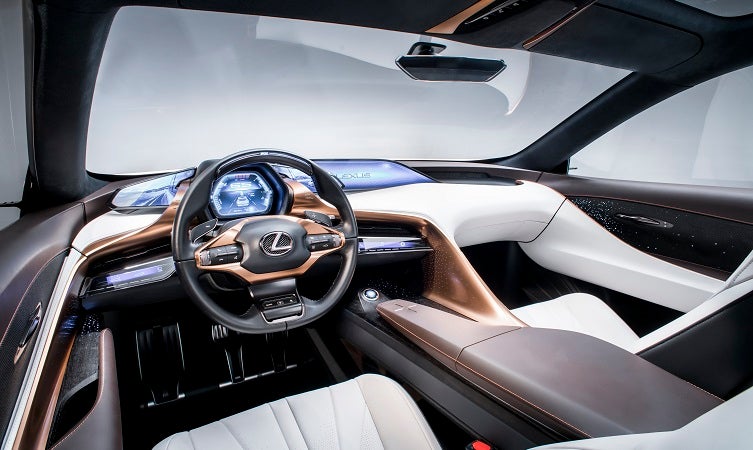 More screens can be found in the rear of the vehicle, where panels are located on the back of the front seats. These are navigated by a touchscreen console that sits in-between the two rear seats.

There are no analogue controls here. Instead, control of in-car systems and the infotainment unit is via haptic touch-sensitive controls and gesture recognition.

The Limited concept also promises 4D navigation, whereby directions aren’t only displayed and fedback with audio instructions, but the system also provides the driver with alternative suggestions – such as when to get fuel or take a break, as well as highlighting nearby restaurants. Think of it as TomTom navigation meets the Google Assistant.

The smart systems also extend to the suspension, which reacts to a driver’s style as well as the road and weather conditions. 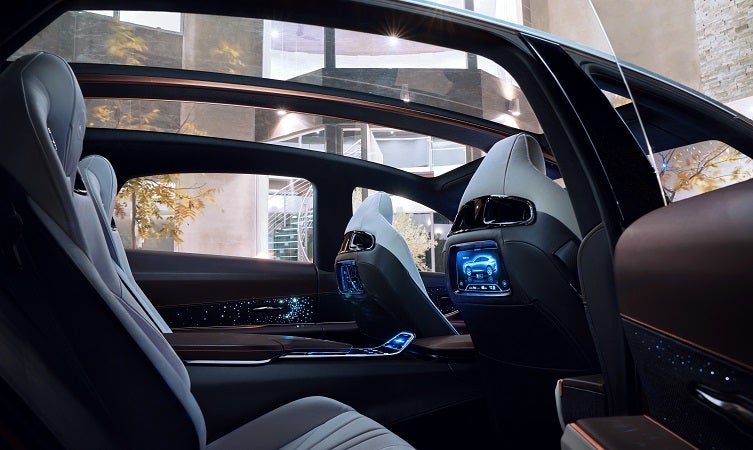 We’ll have to wait and see how much of this concept becomes a reality in the next five years or so. But with the Limitless concept being designed to take petrol, hybrid and fully-electric powertrains, Lexus is clearly looking at having the core parts of the car’s designs on the road before too long.

Like the Lexus, the Infiniti Q is another concept car – but one that’s trying to make sedans cool cars rather than fairly conservative vehicles.

From front to back, the Infinity Q features sharp and swooping angles that are more akin to the look of a sports car than a typical sedan. 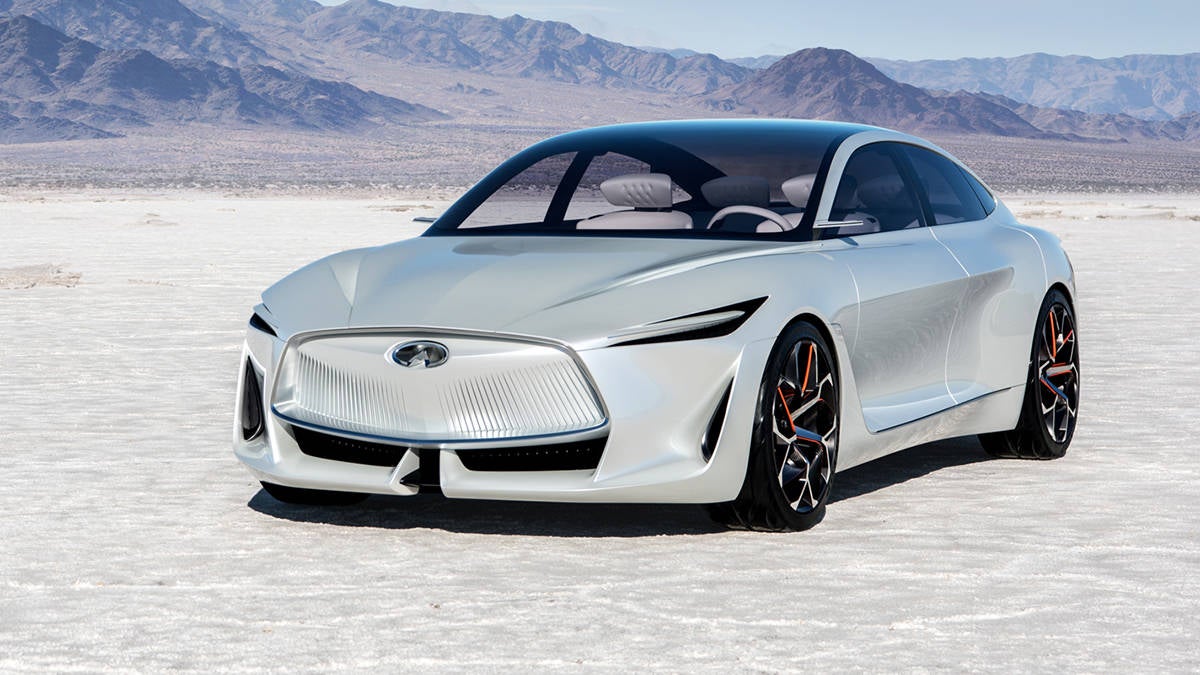 Blade-like front and rear lights and wheel spokes are evocative of parts of Aston’s new Vantage V8, while the sharp yet chunky-looking front-end has a modern, muscle car look. 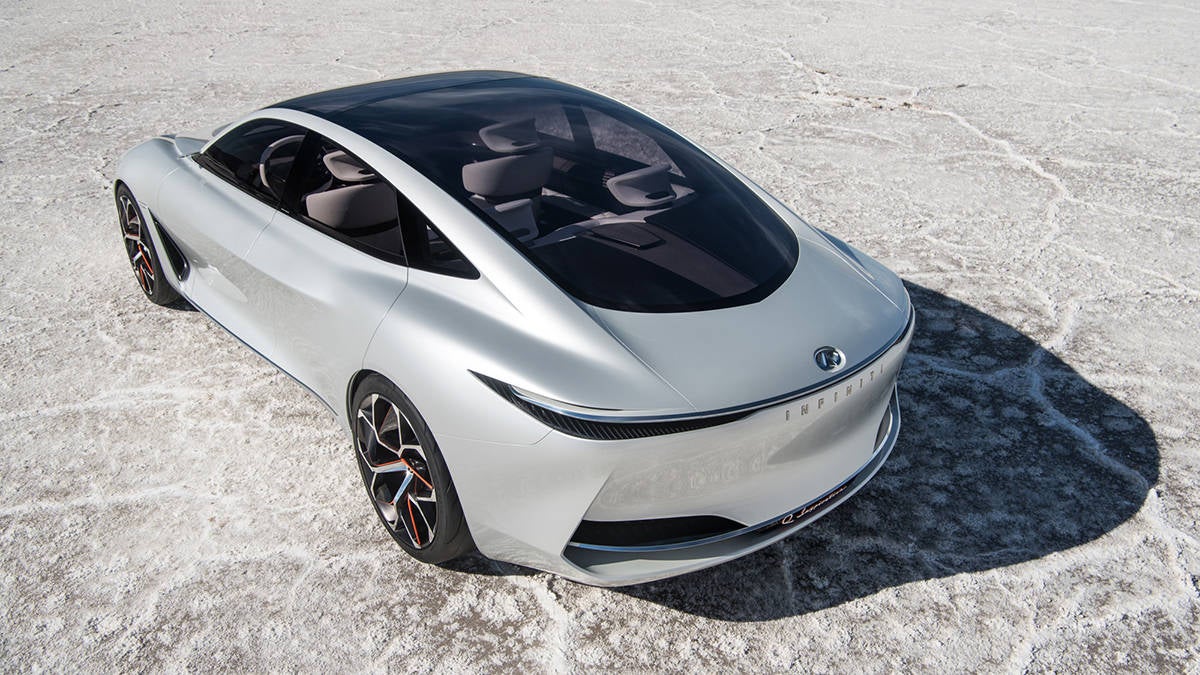 It’s certainly a striking vehicle, and this continues throughout the interior, where padded leather sears flank a floating centre console that runs the length of the cabin.

A look that’s a combo of a luxury yacht mixed with art from a utopian sci-fi comic, the car’s tech further reinforces that feeling. 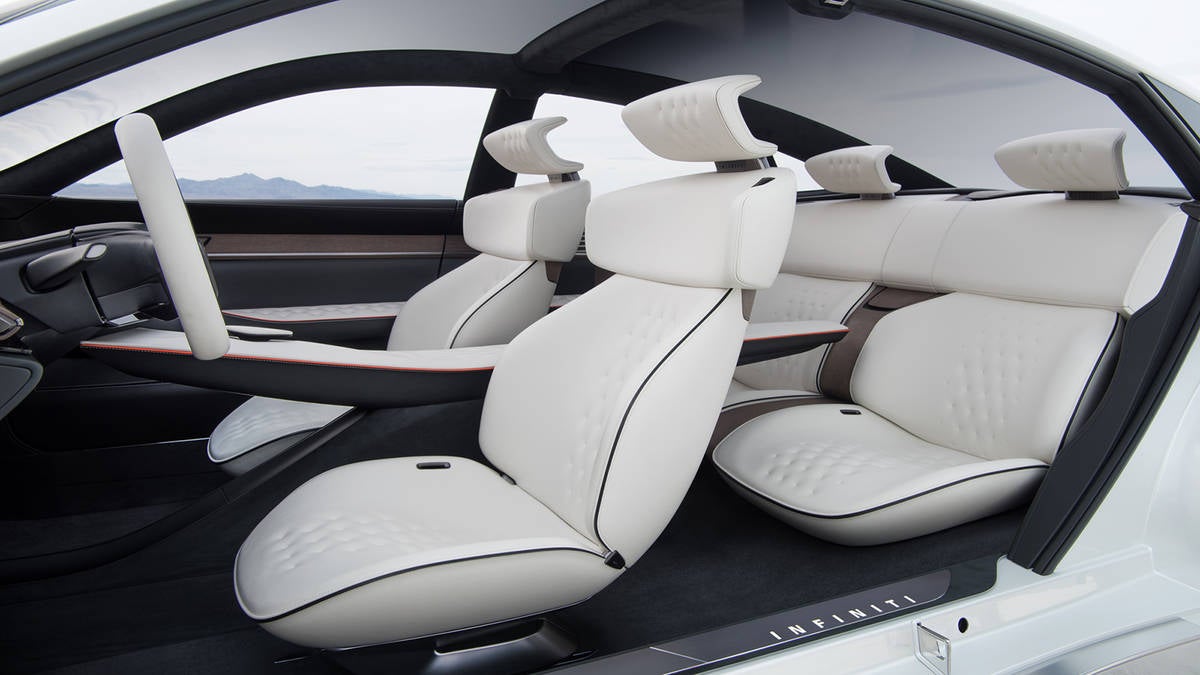 Touchscreen displays can be found in the front and rear of the vehicle, with the former consisting of a single unit that flows from the digital dashboard over to the passenger’s view, providing multiple displays in one thin yet long screen panel. 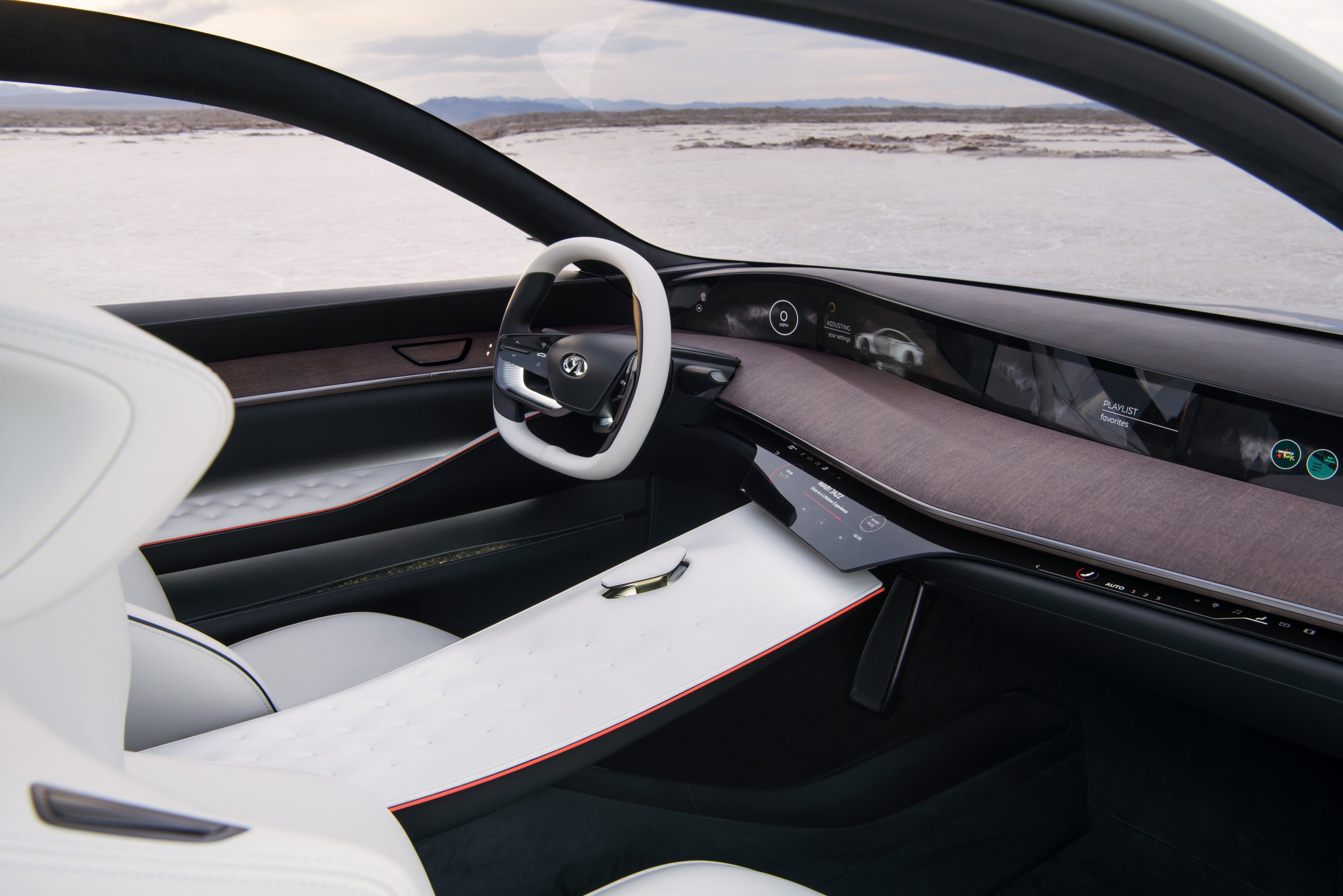 The unit serves up car information and navigation instructions, as well as prompt messages. You navigating the system via touchscreen rather than analogue controls, thus retaining the futuristic look of the cabin.

And thanks to Lexus’ ProPilot autonomous driving system, you can enjoy the technology on offer by allowing the car to take care of the more mundane driving activities such as sticking to one lane when cruising down a motorway.

How much of the concept car will make it onto the road is still open to debate. But given the Infiniti Q is powered by a petrol engine rather than an electric motor, there’s a chance at least some parts of the car will find their way into Lexus cars in the near-future .

General Motors has been working on self-driving cars for a few years now, but its Cruise AV is a quite different to the autonomous Chevrolet Bolts it looks like – which GM has has been testing in California.

The Cruise AV has no pedals or steering wheel, or indeed many other controls. Instead, it uses a Level 4 autonomous driving system to pilot its passengers to their destination of choice. This lack of manual controls is similar to the original steering wheel-free concept of Google’s driverless car. 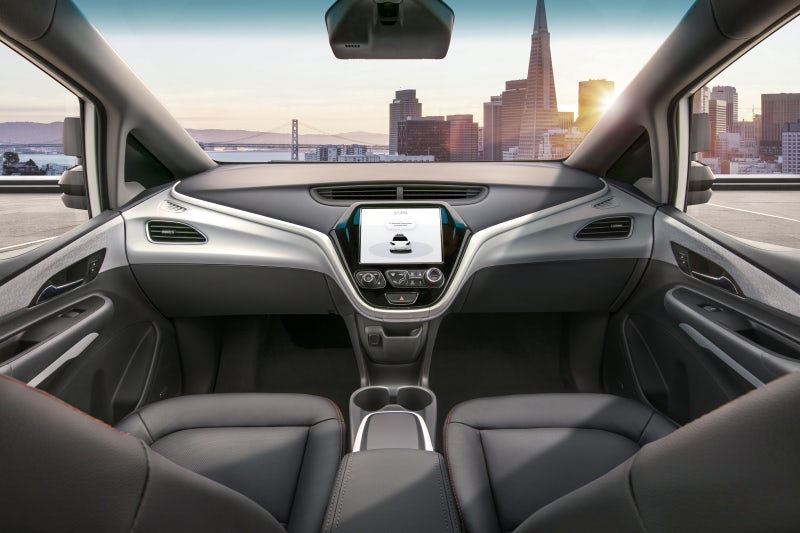 GM explained how a combination of cameras, LiDAR (light detection and ranging), sensors and computer systems help the car to navigate roads safely.

The vehicle looks to form the basis of an autonomous taxi service, where people can summon a driverless car through a mobile app, as well as send it personal preferences for in-car climate control and radio stations so the ride is setup exactly how they’d like.

A tablet-like touchscreen sits at the centre of the car’s dashboard, serving as a way to access additional information about the car and the ride, while reminders to fasten seatbelts and shut doors will also flash up on the screen.

The only buttons on offer are a few that surround the tablet, which can be used to contact remote assistance in the event that something goes wrong with the driverless car.

Autonomous taxis are no longer a novel concept, particularly with many car makers now working on self-driving systems and the likes of Nvidia partnering with Uber to help create a fleet of self-driving cars.

But GM’s Cruise AV does hint that fleets of fully-autonomous cars could be on our roads sooner than later, provided legislation and safety concerns don’t stand in the way.

From the cars showcased at the AutoMotor Show, it looks like the next wave of vehicles will offer smarter and more elegant infotainment and connected tech – a trend we also noticed at CES in Las Vegas this year.

Further down line, they could become entertainment and productivity hubs on four wheels, as self-driving systems take over and allow drivers to take their eyes off the road ahead without fear of dire consequences.

Diehard petrolheads might not approve, but for anyone who’s a fan of smarter technology, the automotive world in 2018 and beyond offers plenty of appeal.

Have we missed any standout cars from the Detroit Auto Show? Let us know on our Facebook page or tweet @TrustedReviews.