If you missed the live stream video, we’ve rounded up all the latest news, games, announcements and more right here. 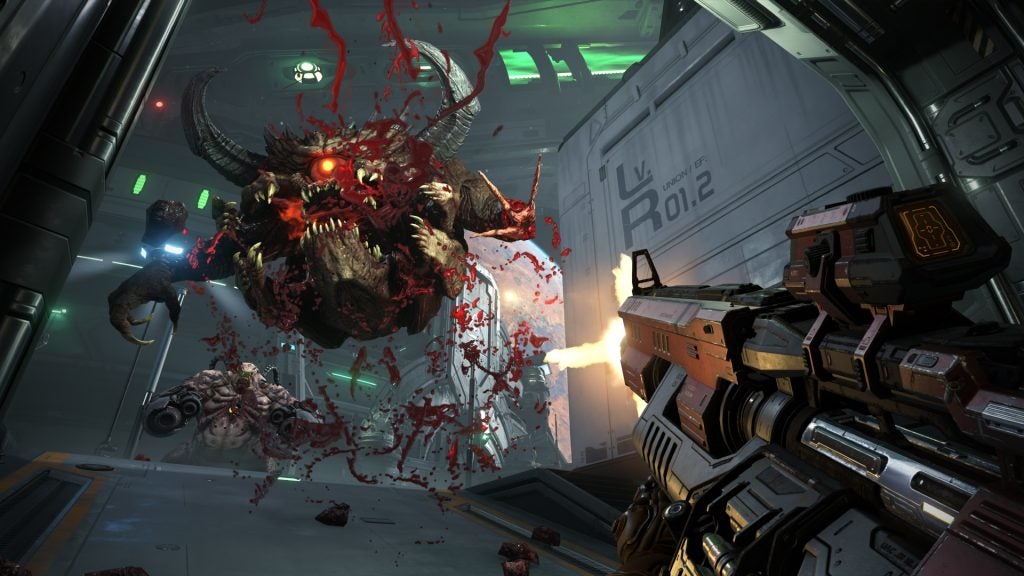 We’ve listed all the big reveals from Bethesda E3 2019 below.

We finally got a better look at the rip-roaring shooter Doom Eternal. Not only did we get a trailer where we say the Doomslayer bloodying countless demons, but we were also treated to a fast-paced gaemplay demo.

Here we saw the player propelled into the heart of Mars where all sorts of demons lay waiting. Then the typical epic shoout-out follows, featuring new enemies and new explosive firearms. If you want more details on the upcoming Doom sequel, be sure to check out our hands-on Doom Eternal review.

Bethesda also teased a new multiplayer mode for Doom Eternal called Battle Mode, which looks as chaotic as you’d expect as demons take the fight against the Doomslayers. We’ll hear more about this multiplayer mode at QuakeCon.

Best of all, Doom Eternal was finally given a release date, with Bethesda affirming a 22 November 2019 launch. The collector’s edition was shown off too, which is complete with a Doomslayer helmet.

One of Bethesda’s most intriguing reveals was Deathloop, as they showed a trailer where two assassins seem to be trapped in some sort of groundhog day time loop. The two characters also seem to have superhuman powers, with one having psychokinesis powers that can be used to push enemies around, and the other being able to teleport.

Most exciting of all, Deathloop is being developed by Arkane Studios, which is responsible for the superb Dishonored series. Sadly, there was no release date.

Rage 2 gets a Rise of the Ghosts expansion

Bethesda is proving it hasn’t forgotten about Rage 2, as during its E3 conference it unveiled a new DLC expansion called Rise of the Ghosts.

A trailer emphasised that this expansion brings with it a heck of a lot of new content, with more enemies, vehicles, gameplay modes, cheats and stories all being bundled into the DLC. If it’s another excuse to jump back into Rage 2, it sounds pretty darn good to us.

If you’re an active The Elder Scrolls Online player, you’ll be excited to hear a brand new story chapter has been unveiled, and it’s brimming with dragons. The trailer showed a team of dragon hunters take down one of the scaly monsters, which looks to be aim of the game for the MMO DLC.

Bethesda said more details will become available at QuakeCon, but before then you’ll be able to play the Dungeon DLC Scalebreaker to fill you dragon appetite.

The Evil Within’s creator Shinji Mikami presented a new intriguing game called Ghostwire Tokyo, which showed people suddenly evaporating on the streets of Tokyo as if Thanos was back to his dirty old tricks. The trailer then went on to show all sorts of creepy ghoulies taking over, as a mysterious figure with a bow and arrow confronts them.

Not a lot more was announced for this mysterious title, with the developers even tight lipped about a release date. The trailer certainly is a good watch though.

Fallout 76 had a truly terrible launch, but Bethesda seems to be working very hard to make it up to fans. The most exciting addition of all is the introduction of a new 52-player pvp battle royale mode, called Nuclear Winter, as players duke it out against each other on the wasteland.

Bethesda also revealed a free DLC pack called Wastelanders, which will finally see NPC characters in the massive multiplayer online game, complete with dialogue trees and new quests. Finally, Bethesda revealed there will be a free trial between 10 June – 17 June to entice players to see all the improvements they have made to the game.

Remember that free The Elder Scrolls game for mobile? Well it’s confirmed to be coming to the Nintendo Switch this Fall, and it’s free to download! What’s more it supports cross play with the mobile version, so you’ll be able to carry over your progress.

The mobile version is also getting a massive new update, bringing with it a new dragon quest line and a treasure chest of more jewellery. This update is available to download right now, so you get playing straight away.

Bethesda E3 2019 conference – How to watch the showcase

The Bethesda E3 2019 conference may have finished, but you can watch it all again right here.

What are you hoping to see from Bethesda at E3 2019? Let us know on Facebook and Twitter @trustedreviews or email the editor below.