Officially announced at events held simultaneously in Stockholm and San Francisco, Battlefield 4 already looks to be a stunning game with photorealistic graphics.

Unveiled alongside the first gameplay demo, Battlefield 4 is powered by DICE’s Frostbite 3 engine and DICE chose to use AMD’s newly announced “world’s fastest graphics card”, the AMD Radeon HD 7990, to début the game in all its glory.

“To be this early in development, and to already be so polished is a huge achievement for the DICE team and a reflection of their passion and commitment to driving the franchise forward,” said Patrick Soderlund, EA Games’ Executive Vice President. 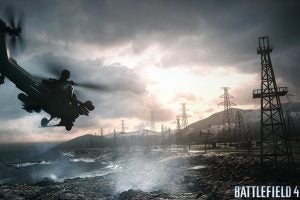 “As artists and craftspeople, we are focused on creating a dynamic, open design that brings people together with amazing, surprising unscripted moments that they’ll talk about for days. That’s the beauty of Battlefield.”

DICE has also announced a selection of Battlefield 4 exclusive pre-order content to true Battlefield fans. If you do choose to pre-order, you will receive “a premium expansion pack at no additional cost.”

No further details have been offered on the premium content, but it is rumoured to include the game’s first DLC pack, entitled Drone Strike.

There is also a Battlefield 4 Digital Deluxe edition available to pre-order and an EA Games Origin exclusive. Both versions include special in-game items and the pre-order benefits, but we currently don’t know what these will be.

Battlefield 4 multiplayer gameplay to be revealed on Monday, June 10.

The EA press conference will start at 1pm PT of 9pm BST on Monday, and will definitely offer a first look at the Battlefield 4 multiplayer campaign ahead of the annual E3 gaming conference.

Battlefield 4’s single player campaign was the only focus of the existing trailer (see below), so fans will certainly be excited to see what the new multiplayer will offer them.

The developer has also said it will be revealing “other surprises” during the press conference involving Battlefield 4, so stayed tuned with TrustedReviews for all the news.

Battlefield 4 will also feature during Microsoft’s Xbox One press conference on Monday June 10 at 12.30pm ET or 5.30pm BST, confirmed by the Xbox One E3 trailer released earlier this week. 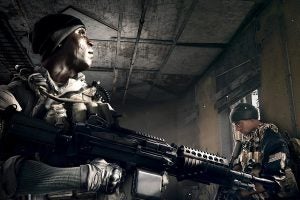 EA released an official survey to garner the amount of support for the game, but it also potentially revealed more Battlefield 4 features.

The survey suggested that the series’ next instalment could feature extended naval combat sequences. Although the publisher did say any of the new features mentioned are “not indicative of anything we have in the works”, further sea battles are not a huge leap for the series, especially if it is something that has proven popular in other games like Assassin’s Creed 3.

“Battlefield 4 extends the front past the shoreline with the addition of intense and dramatic water-based combat,” reads the survey. “Pilot attack boats, RHIBs [rigid-hulled inflatable boats], and jet skis on swelling seas and stormy oceans.”

Not only could Battlefield 4 introduce open sea battle sequences, it could also improve the amount of involvement the player can have with the environment in each level.

“Experience a more dynamic battlefield where no two games will ever be the same. Blow the foundations of a dam and flood the area of combat. Bump into a vehicle and its alarm will give away your position. Cut the power to a building and envelop the enemy in a cloak of darkness. Your actions physically change the battlefield in real time, providing interactive game environments that react to your every move.”

This would improve the dynamic level of each campaign as well as greatly advance the excitement of the already hugely successful multiplayer experience.

The survey also supposedly revealed the Battlefield 4 Battlepacks, which are unlocked according to the amount of hours a player decides to invest in the game.

“Possible rewards include bonus XP boosts, knives, weapon attachments, and customisation options like soldier camos, weapon paints and dog tags [that] will let you play your way and stand out on the battlefield. The more you play the faster you earn them, but with 300 possible Battlepacks featuring more than 1200 items, you never know what you’ll unlock.”

At the Battlefield 4 event, DICE released the game’s first demo. Over 17 minutes long, the demo begins with Bonnie Tyler’s “Total Eclipse of the Heart” playing on the radio of a sinking vehicle. Within the submerged car are the player’s character, a solider called Recker, and his squad members.

From there the demo’s story takes you back, explaining how the squad managed to find themselves in such perilous circumstances. We won’t spoil it for you, watch the demo yourself below.

“Today’s demo was just the beginning – we have so much more in store,” said Soderlund at the launch event. “It is thrilling to witness people’s reaction when seeing the game for the first time. It really makes you realise that we are at the beginning of a whole new era for gaming.”

A leak pre-order poster from Australian retailer EB Games revealed that Commander Mode could be seen in Battlefield 4. Suggesting you have the potential to be an “armchair general” as you “rank up into the seat of the brand new Commander Mode and lead your team to victory.”

For those not too familiar with the series, Commander Mode was last seen in Battlefield 2 and enabled one player per team to take control of the squad’s resources.

Battlefield 4 could also bring with it Battlelog 2.0 as an upgrade to the Battlelog from Battlefield 3, which is said to be “the next version of the state of the art gaming portal.” 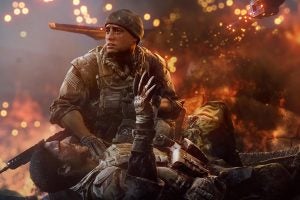 DICE stated that a Battlefield 4 release date would occur sometime in “fall” this year, so we’re probably looking at something around the beginning of Q4.

However a potentially more specific Battlefield 4 release date was tipped in a pre-order poster from EB Games as October 31. Such a date means the game launch on a Thursday rather than the usual game release patterns of Tuesday in the US and Friday in the UK, which could make the poster a fake. Alternatively the date used could just be placeholder text considering Battlefield 3 was released on exactly the same date last year.

Both powered by the Frostbite 3 engine, any official next-generation console Battlefield 4 release date has not yet been released, due to the fact that any release dates for the consoles themselves are still unknown.

Alongside the next-gen console release confirmation, EA Games and DICE also announced that anyone pre-ordering the game will receive the first DLC expansion pack for free.