We’re not the kind of site that likes to throw around quotes from Nietzsche, but there’s something about Battlefield 3 that makes you think of Friedrich’s old chestnut: “He who fights monsters should see to it that he himself does not become a monster.” Battlefield 3 has, from the very beginning, been developed, marketed and hyped as the game that could take on the Call of Duty juggernaut and win. Somehow, during this process it has become exactly the kind of monster it was designed to fight – a leaden, tunnel-visioned spin on the military shooter, with exactly the kind of sub Tom Clancy plotting and reliance on shock moments that DICE seemed to be working against in Battlefield: Bad Company 2. As a single-player game, Battlefield 3 has all of the failings of Modern Warfare, Modern Warfare 2 and Black Ops, but without the assured pacing and big movie moments that make the Infinity Ward and Treyarch games work. In aggressively confronting Modern Warfare, Battlefield 3 has become a second-rate clone. 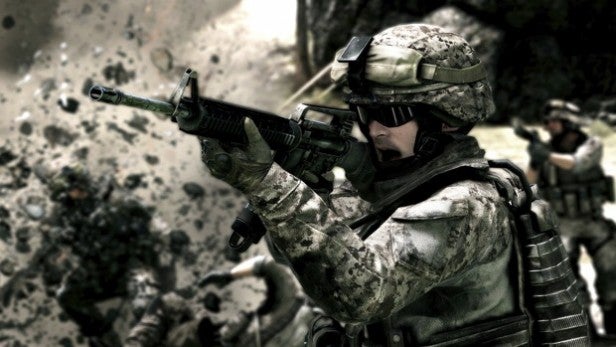 Admittedly, there are some massive ‘buts’ waiting in the wings. The first is that Battlefield 3 is an astonishingly good-looking clone. There’s no question that the Frostbite 2 engine is capable of producing unbelievably detailed human figures, richly textured war-torn scenery and the kind of gritty, cinematic lighting you might see in a Ridley Scott film. On the PlayStation 3 version we’ve spent most of our time testing, Battlefield 3 matches benchmark titles like Killzone 3, Crysis 2 and Resistance 3 for visual spectacle, and arguably exceeds them. The animation, with systems half-inched from EA’s sports games, looks uncannily convincing much of the time, and even the dialogue-heavy cut-scenes frequently look breathtaking. 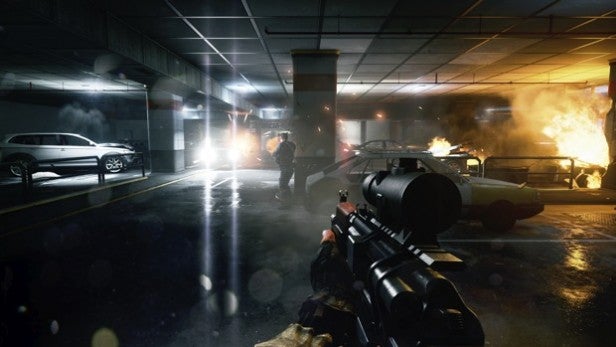 The gameplay, however? Not so much. Like Call of Duty, Battlefield 3 has chosen to tell its tale of modern warfare and counter-terrorist action by hopping from character to character, with a flashback framing structure to hold it all together. However, it hasn’t really worked. While you could hardly call the storyline of Modern Warfare 2 or Black Ops intelligent or coherent, it still does a nice job of propelling you from place to place and ramping up the interest. With Battlefield 3, you sort of drift from location to location and situation to situation, and it’s almost impressive how regularly the big moments are botched. Sequences that are clearly designed to have the shock value of Modern Warfare’s nuclear explosion or Modern Warfare 2’s infamous No Russian mission fall flat, leaving nothing more than a slightly nasty taste in the mouth. 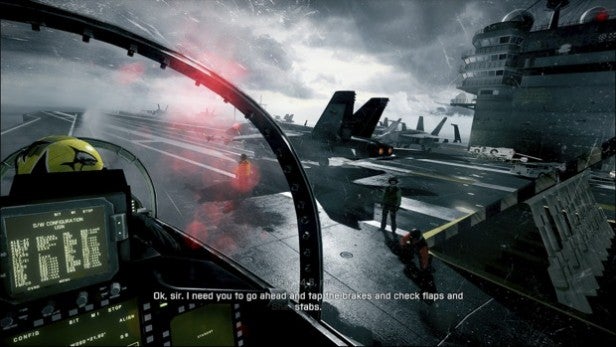 The levels, meanwhile, are gobsmackingly linear. Follow this guy, go here, go there, shoot them. Want to use your own initiative? Take a different route? Forget it. You’re here to follow orders, soldier. It’s all the worse because, with Battlefield: Bad Company 2, DICE seemed to be going down a path that balanced the orchestrated mayhem of a Call of Duty with the more open, unpredictable combat that the Battlefield brand was known for, and the result was a game which felt genuinely thrilling and on the verge of chaos. By contrast, Battlefield 3 feels dumbed-down and generic. 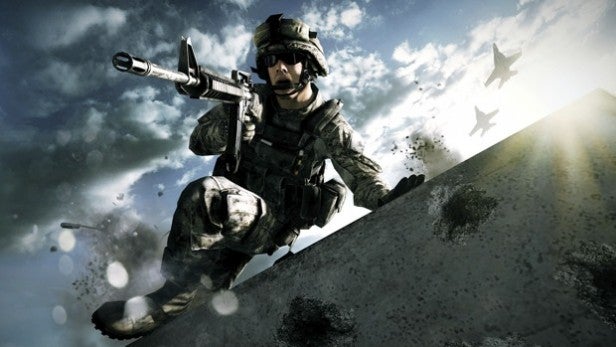 It also feels frustrating. One frequent complaint about the Bad Company duo – particularly the first – was that your AI opponents combined the sharp-shooting skills of a Vasily ‘Enemy at the Gates’ Zaytsev with the heightened senses of a Marvel superhero. Well, the bad days are back again, with regular choke points where you’ll struggle to draw a bead on your foes before multiple headshots put you down in a fraction of a second. You will get past these, but only through an awful lot of crawling on your belly – and who really signs up to do that?

To be fair, there are some exceptional sequences. A running battle through offices and trading floors and onto the streets of Paris has some fantastic moments, as bullets chew their way through cubicles, glass walls and monitors, and while the inevitable tank mission is particularly dull, it’s hard not to find a little love for a game that lets you drive a tank through buildings. Overall, though, the single-player campaign is a bit depressing. Battlefield: Bad Company 2 left us hoping that Battlefield 3 would be a new benchmark for the military FPS genre. Instead, it’s just another stone in a well trodden road. 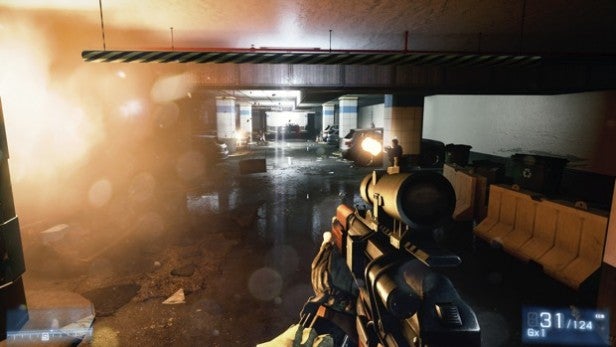 At this point, then, you might be wondering where the generous score comes from. Well, this is where the other big ‘but’ comes in. For all its problems as a single-player game, the multiplayer Battlefield 3 experience is just magnificent. The goodness starts with the co-op missions, which while limited in number, are more entertaining than the single-player just because you have another player involved. However, the real heart of Battlefield 3 is its large-scale team-based multiplayer. This is classic Battlefield, with big maps, well-balanced troop types and a lot of vehicular mayhem, and – on console – it’s the first time we can really say that. PC owners, of course, get an even bigger game, with 64 players instead of 24. And while there are some teething troubles with matchmaking, particularly on the Xbox 360, we’ve found it remarkably easy to find a stable game on PS3. 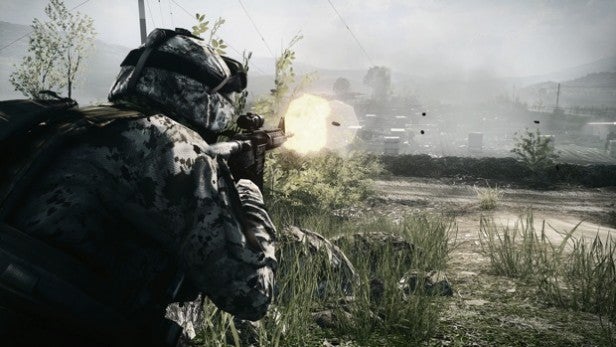 Perhaps the best thing is that there’s real variety. If you want to play on huge, sprawling maps, battling over control points and steadily whittling away at the enemy forces, then you can. If you want to drive a tank, dive out of an exploding helicopter or play gunner on someone else’s ride, then you can. If you want to play seriously, with squad tactics and voice communications, then you can. And if you prefer smaller-scale, urban arenas that feel a little closer to Modern Warfare, then maps based in the Paris Metro or on the banks of the Seine give you just what you’re looking for. In particular, playing in Rush mode, where the two teams attack or defend specific positions, tends to concentrate the action very nicely. We also love the new mechanics for running and jumping over walls and barricades – it gives the action an even more dynamic edge. 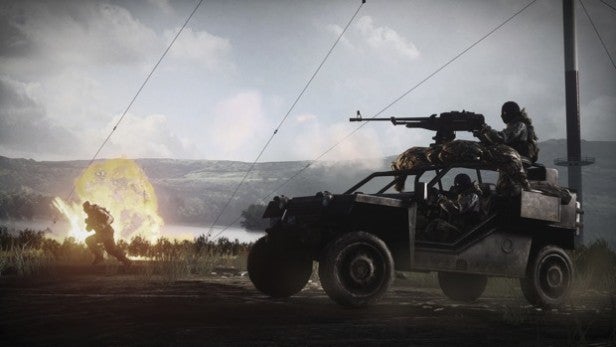 This is hideously addictive stuff, with a scale and grandeur that’s curiously absent from the single-player campaign. A persistent experience system with perks and upgrades to unlock  helps keep you hooked, but the action is so compelling that it’s almost unnecessary: you just want to do better next time, and work your way up from the guy who dies to the ultimate armchair warrior. There’s also a real sense of experimentation. Why just run towards a control-point when you can drive a vehicle into it, running over the opposition before leaping out to claim it for the team? While every game has its share of cowardly-custard, yellow-bellied snipers and selfish, tank-squandering halfwits, it’s a game where the team mentality inspires you to new flights of heroism. Sure, it’s a different multiplayer experience to the more clean-cut, kill or be killed battles of Modern Warfare 2 and Black Ops, but we’d argue that it’s a richer, deeper and more varied one. In fact, it’s so good that it doesn’t just redeem the disappointing single-player campaign, it practically renders it irrelevant.

Verdict
Despite the mostly duff single-player campaign, Battlefield 3 is an essential buy for its fantastic, epic-scale multiplayer action. While PC gamers get the best of it, with a higher player cap and better graphics, console games still get the authentic Battlefield feel, and the most drama-packed, spectacular online warfare in town.