This is it people – Amazon Prime Day 2019 begins so let’s dive headfirst into a sea of deals, discounts and price drops.

Before we do, we have to point out that you need an Amazon Prime membership in order to access the deals. So if you aren’t a member, but still want to partake in Prime Day, then register for a free 30 day trial now – you can always cancel at the end of the 30 day period.

Use our handy navigator below to get you straight to the type of deals that you’re after, or if you simply want to know more about Prime Day itself, then you can read through our guide found at the bottom of this page. So without further ado, let’s dive in.

Jump to the deals live now:

Amazon Prime Day 2019 – everything you need to know:

Read on for the most up to date discounts:

As you might expect, Amazon has slashed the prices of a whole host of its services including Kindle Unlimited, Amazon Channels, Amazon Music Unlimited and more.

With the summer holidays just around the corner, Amazon Prime Day presents the perfect time to bag yourself a Kindle e-reader on the cheap. As it just so happens, Amazon has just dropped the price on the Kindle Paperwhite, getting you the most recent version for just £79.99. Given that the Paperwhite includes a backlight and one of the best levels of pixel clarity on an e-reader (especially for just £100), there no excuse why you can’t fall in love with reading again.

The price of both the Echo Dot (3rd gen) and the Echo Show (2nd gen) have both plummeted, going for just £22 and £159.99 respectively. At such a low price, the Echo Dot in particular is a great shout for anyone who wants to buy their first smart speaker.

The Amazon Fire Tablets have always offered great value for money, but this Amazon Prime Day, every single Fire Tablet (including the Kids Editions) just got even cheaper. From just £29.99, you could be gifting someone you love a brand new Fire Tablet, or just buying a cheeky second tablet for yourself – one that you don’t mind being chucked around at the bottom of your bag.

Why not make use of Amazon’s incredible Prime Day deal for the Fire TV Stick? At just £19.99 while stocks last, this is an incredible bargain that can get you closer to the content you love.

From Sony to Bose, there’s a ton of stellar headphone options that’ll receive major discounts over Amazon Prime Day, but for now we’ve highlighted our favourite from the offers available right now.

Sick of the lacklustre audio quality emanating from you TV? It might be time to pick up a dedicated sound in the Prime Day sale – but if you can’t wait to upgrade, then you should take a gander at our current favourite bargains.

Due to their usual high price point, TVs tend to be one of the most popular products of any Prime Day sale. Given how quickly Amazon’s TV offers can sell out, it’s worth snapping up one these early deals before the bonanza begins.

Looking to upgrade your work laptop or simply want something better for the next school year? Whatever your reasons are for wanting a great laptop deal, we’ve got you covered.

Having a largely automated home, run by a futuristic AI programme once seemed like a pipe dream, and an expensive one at that. Thanks to the recent surge of affordable smart home tech, the cost of bringing your home into the 21st century has never been more palatable.

Can’t decide between an Apple Watch, a Fitbit or a Samsung Galaxy Watch? Picking which wearable/fitness tracker to go with can be a tricky affair, one that often boils down to your specific needs and what you want to get out of a handy little assistant on your wrist.

Trying to stay with your current network provider whilst hopping over to a new handset can often be a costly and tedious affair.

Vacuum cleaners might not seem like the most exciting of tech gadgets, but having a good one can seriously change your household routine, and often make you realise that your chores have been made far more difficult by out of date designs. Surely then there’s no better time to invest in a brand new Dyson, Shark or even G Tech vacuum cleaner than when the deals start dropping?

Let’s face it, it doesn’t matter how good the manufacturers say they are, smartphone cameras will never match up to their full-fat counterpart. With great photography being the main focus of their design, cameras can give you far more bang for your buck, but even more so if you grab a camera during the Prime Day sale.

With a respectable number of exclusive titles under its belt, the lifecycle of Sony’s PS4 is almost at an end, but you can be sure that it’ll translate into some fantastic PS4 Prime Day deals.

The choice is yours this Prime Day.

Due to still being fairly new on the market, there weren’t too many Amazon Prime Day Nintendo Switch deals to speak off last year, but we’re picturing a totally different scenario this time around. P 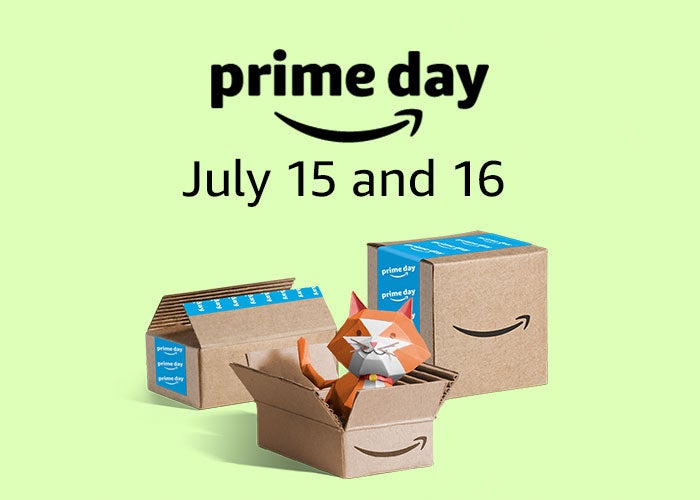 What is Amazon Prime Day?

Almost as big as Black Friday and Cyber Monday, Prime Day is the sale that Amazon dedicates exclusively to subscribers of the Amazon Prime service. While it’s unlikely that you’ll see as many deals as you would during the Black Friday, the deals themselves have proven to be, on the whole, far better than their November counterparts.

Even though we’re just a few days away from the sale, it’s never too late to sign up for a 30-day free trial to Amazon Prime and make the most of the sale. With the said, there’s plenty more to enjoy from being an Amazon Prime member:

When is Amazon Prime Day?

Amazon Prime Day 2019 officially begins at midnight on July 15th, which means we’re just a few short hours away from one of the biggest sales events of the year. Don’t worry though, the sale will continue until the end of July 16th, so you don’t necessarily have to stay up past your bedtime in order to bag a cracking deal.

Just because we’re about to enter the breach however, that doesn’t mean that it’s too late to sign up for a free trial to Amazon Prime. Just follow the link below – or alternatively make use of the £20 discount now running for a yearly subscription – to get your account up and running.

If you’ve never signed up for Amazon Prime before then you’re in luck, you’ll be eligible for a free one-month trial. You’ll get all the benefits of being a Prime Member, including one-day delivery, a subscription to Prime Video and of course, access to the deals of Prime Day, and it won’t cost you a penny.

If you decide to stay longer, you’ll receive the usual Amazon Prime benefits but for £7.99/month. Those include next-delivery on “millions of items” according to Amazon, Prime Originals – so that’s a Netflix style streaming service where you can watch Amazon commissioned shows (read our Prime Originals verdict here), discounted Kindle books (including three months of Kindle Unlimited), and access to Prime Video. Read more about what Prime members get in our exhaustive guide.

What are Amazon Lightning Deals?

As ferocious as the name implies, Amazon Lightning Deals offer some of the retailer’s most significant discounts. While Lightning deals do appear throughout the year, their intensity (and the number of products they cover) increase throughout the Prime Day season. What’s the catch?

Well, unlike other deals featured on Amazon, lightning deals are only available for very short windows of time, making them very tricky to pick up.

As we move closer to Prime Day, Amazon’s lightning deals will appear on the main Amazon Prime Day page (click here). Of course, if you don’t have the time to be watching Amazon all day, our twitter pages (@TrustedReviews and @TrustedDeals) will feature the best lightning deals as and when they appear.

Which other companies are competing with Prime Day?

You didn’t think that all the other retailers would just roll over and let Amazon have all the fun? Right now, Currys PC World is operating its Black Tag Sale which has several amazing discounts on TVs, smart home devices and more.

eBay on the other hand is taking Amazon to task by offering a bunch of phenomenal deals, all conveniently priced at the same RRP of an annual subscription to Amazon Prime (see what they did there?).

If you’ve got gift cards and store credit to use elsewhere then fear not, the likes of Argos, John Lewis and more are all running their own different sales to capitalise on the action.

See our full coverage below for specific product categories: