Fourteen years after Age of Empires 3, fans of the iconic RTS series are finally getting a sequel, and we received an exciting first look at Relic Entertainment’s new project at X019.

Developer Relic Entertainment, who is best known for the Company of Heroes and Dawn of War series, commented on its involvement with the project on its official website:

“We couldn’t be more proud to be a part of the legacy. We can’t wait to tap into our strengths as a studio to fuse historical context with deep strategic gameplay, and to bring this franchise back to the forefront of gaming and into the hands of its beloved community.”

Trusted Reviews has rounded up all the latest Age of Empires 4 information, including all the latest news, release date, gameplay, trailers and more. What is Age of Empires 4?

Age of Empires is a PC strategy game that follows the events of history across the world. It’s an incredibly detailed real-time strategy (RTS) title with several spin-offs detailing different periods of history, all of which players can involve themselves in.

The original Age of Empires games have becomes genre classics, Age of Empires 2 and Age of Empires both receiving ‘Definitive Edition’ re-boots recently. The graphics and gameplay of the classic titles were brought up to date and fans enjoyed the chance to revel in nostalgic RTS gaming.

The release date hasn’t been announced yet, but we’re expecting Age of Empires 4 to turn up some time in 2020.

However, we do know that the game will be exclusively available on Windows 10 platforms. It’s coming to Xbox One, which is excellent for console fans. Whether or not the game will launch on console and PC on the same day remains to be seen. The Age of Empire 4 ‘gameplay’ trailer, which made its Debut at Microsoft’s X019 event, shows off some new features in the game and lots of interesting graphics features too.

The Age of Empires 4 announce trailer shows conflicts across history in the form of concept drawings, with a powerful voice-over setting up what is sure to be a collection of epic battles in the game itself.

Take a look for yourself:

Age of Empires 4 Gameplay – What can we expect?

The first gameplay trailer shows a medieval siege, with two armies arrayed against each other and trebuchets firing projectiles at a large stone castle wall. Interestingly, the wall is manned by soldiers. If this is a feature in the final game it would be an entirely new addition to the Age of Empires series.

However, based on the different art shown in the older announcement trailer, the game might not be solely set in the medieval period and instead take place across different periods of history. During the trailer we see Native Americans, British Redcoats, Romans and more.

This has been done before, notably in games like Empire Earth II, an RTS heavily influenced by the Age of Empires series, which allowed players to progress from the Stone Age to the ‘Synthetic Age’. 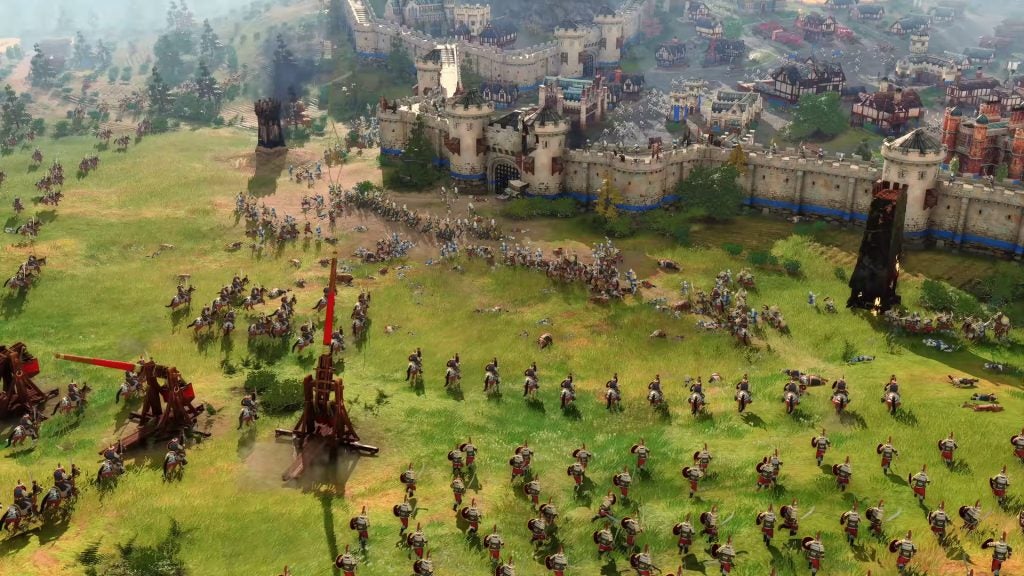 Another key change is the addition of more varied, undulating terrain types. Now, mountains and valleys feature, where before maps were flatter with occasional smaller terrain features. The height map is a sizeable update that will modernise gameplay and add a wide variety of tactical considerations, especially if the game does venture into later eras with more projectile and gunpowder-based units.

We expect Relic’s gameplay to follow the same core formula of previous entries, modernised to follow the evolution of the genre and with a few of their own flourishes. The huge cult following of Age of Empires will be nervous about how ready Relic is to depart from series norms. However, the trailer and early signs, show a game that hasn’t ventured too far from the series’ previous path..

At the moment we’re largely left guessing as to how the game will really play, with only about a minute of game engine footage. Stay tuned though for more updates.

What do you hope to see from Age of Empires 4? Let us know on Twitter and Facebook @trustedreviews!