The Galaxy Note 10 is here and, while we weren’t enamoured with every part of it, we did find plenty to like about Samsung’s new family of phablets. Here’s our pick of its 4 best features.

1. Samsung is finally fixing the Exynos battery issue with the Galaxy Note 10

For years now, the use of different CPUs depending region has been a huge elephant in the room for Samsung phones. This is because the Qualcomm Snapdragon variant seen in the US has always offered considerably better battery life than the Samsung Exynos rival seen everywhere else. This was especially true on the Galaxy S10, with the Exynos version having a woefully poor battery life compared to its Qualcomm sibling.

This is why I’m super happy to see Samsung work to bridge the gap with the Note 10. Specifically, Samsung’s loaded the UK-bound Note 10 with a Exynos 9825. This a slightly more efficient version of the 9820 chip seen on the Galaxy S10, which Samsung says will match its Qualcomm rival on power efficiency. If true, this will be a big step forward that I hope Samsung replicates on all its phones.

The CPU isn’t the only new feature designed to improve the Galaxy Note 10 and Note 10 Plus’ battery. Samsung’s also added 45W fast charging support to its latest phablets. Admittedly you have to pay extra to get an actual 45W charger – you’ll only find a 25W plug in the box – but based on our experience with the Huawei P30 Pro, which features the same fast charging support, it’s still an awesome upgrade.

The Note-series S Pen styluses have been a constant differentiator for Samsung phablets, and this remains the case with the Note 10. Samsung’s come out all guns blazing with the Note 10’s stylus, loading it a wealth of funky new features and upgrades. The coolest of these are the new “air gestures”. 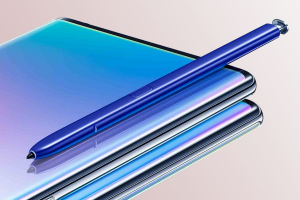 These are nifty new shortcuts that let you do things like zoom into photos or adjust the phone’s volume while floating the S Pen above the display. This sounds small, but from what we’ve seen, they could make scribbling notes and quickly cropping photos even easier on the new phablets.

The Galaxy S10’s hole-punch front camera was pretty much the only design feature we weren’t sold on. The black hole in the top right of the phone felt fundamentally inelegant and ruined key things like gaming and movie watching on the S10.

Thankfully, Samsung’s learned from its mistake and partially corrected it on the Note 10 and Note 10 Plus. Specifically, Samsung’s moved the hole-punch to the centre of the phones’ top edge.

The solution isn’t quite as elegant as the pop-up selfie camera seen on the OnePlus 7 Pro, but it’s still a clear improvement on the S10’s design. Hopefully Samsung will take things even further on its next flagship and finally make the all-screen Galaxy phone we’ve been waiting for.