The Samsung Galaxy Note 10 and Note 10 Plus have both just been unveiled at the latest Unpacked event in New York. While many of the features have been leaked heavily over the past few months, it’s still great to see Samsung’s latest flagship phablet finally out in the flesh.

1. Samsung Galaxy Note 10 vs Note 10 Plus – There’s a dramatically bigger battery on the Note 10 Plus

One of the most significant differences between the two versions of the Note 10 device is the size of the battery. More sizeable handsets tend to have larger batteries, and that’s the case here.

Some might view the fairly small size of the Note 10’s battery cause for concern, and we’d say that’s fair. It’s smaller in size than the unit that features in the Note 9, and only marginally bigger than the battery inside the Galaxy S10. Hopefully, the drop in resolution (FHD+ vs Quad-HD+) of the screen means that it will still comfortably make it through the day. 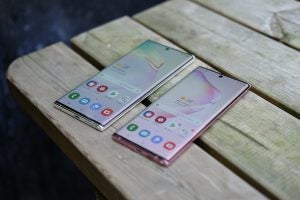 A key spec shared by both devices is 25w charging. This can be upped to 45w if you buy a supported charger. Wireless charging is supported by both phones.

Related: Note 10 Plus vs OnePlus 7 Pro

2. Samsung Galaxy Note 10 vs Note 10 Plus – Size, display and resolution

The “Plus” moniker almost certainly relates to the difference in display size between these two handsets. The Note 10 comes at 6.3in, while the Note 10 Plus has a 6.8in display.

A slightly odd decision– in our opinion, anyway – is the difference in screen resolution. While every recent Note device has packed a quad-HD resolution, the Note 10 lowers that to FHD+. For those wanting to benefit from all the resolution available, the Note 10 Plus with its 3040 x 1440 display is the phone to opt for. 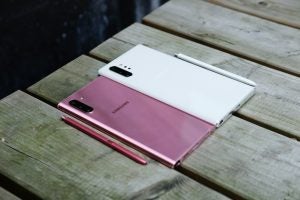 Both phones also benefit from a fingerprint sensor. This is very much the same unit that features in the Galaxy S10, just with the sensor itself moved slightly higher up to make up for the larger size.

Related: The Note 10 Plus is a great phone, but Samsung should have done more

Another classic Note feature is the microSD port. However, in the Note 10 it’s been dropped. Pre-ordering the smaller of the two phones will result in you being unable to expand the 256GB of onboard storage unless opting to go down the cloud route.

The Note 10 Plus, on the other hand, provides the option of either sticking to the 256GB or 512GB along with microSD up to 1TB. Want more storage? Go for the Note 10 Plus.

While you can pay more to restore expandable storage, you can’t do the same with the headphone socket. Sorry, lovers of the 3.5 jack: both varieties of the Note 10 require you to use an included dongle to attach your wired ‘phones.

If you don’t fancy that, you could always use the included USB-C buds or connect a pair of wireless headphones.

Early rumours suggested that the Note 10 (or at least the Plus version) would simply be a 5G phone. This isn’t actually the case, even if 5G is very much on the cards here.

There will be a separate version of the Note 10 Plus with 5G support, which we assume will be sold through 5G carriers. Whether a 5G network – EE in the UK, for example – will stock the 5G and 4G versions remains to be seen.

The smaller Note 10 won’t offer 5G support at all, which is a shame. 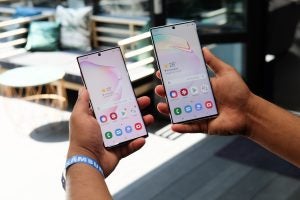 Along with including more storage, the Galaxy Note 10 Plus also ups the RAM count. 4GB more, to be precise.

The Note 10 offers 8GB, with the Note 10 Plus increasing that to 12GB. Both have the same processor, though – and, overall, we doubt there will be much difference between the two handsets.

6. Samsung Galaxy Note 10 vs Note 10 Plus – There’s a small difference with the cameras

Where the Plus model deviates is in the addition of a time of flight (ToF) 3D depth sensor that sits just below the flash module. Seen in devices such as the Huawei P30 Pro and LG G8, this camera sensor allows for more accurate detecting of distance.

Samsung seems to be using it to improve its Live Focus bokeh feature for blurring the background in certain photos and videos. 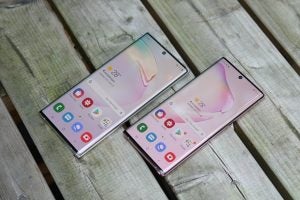 So, there aren’t too many differences between the two versions of the Note 10; however, those that exist are likely to make a significant difference in use. If you’re after a smaller, more manageable device then you’ll have to forego 5G, a more sizeable battery and microSD expansion.