The slow cooker is the culinary magician of the kitchen, turning a pot-full of raw ingredients into a rich and delicious meal while you go about your day. We’ve picked seven of the best slow cookers we’ve tested for conjuring up quick and easy casseroles, stews, curries and more.

In winter time the weather is miserable, the nights are dark and the last thing you want to do after work is start cooking from scratch. Which is where your helpful slow cooker comes into its own.

There are some real gems on the market right now, too. This includes huge units that can comfortably cater for an entire family; feature-heavy, high-tech numbers; and straightforward, frill-free cookers that cost no more than a cheap pair of jeans.

Whatever your family size or meal aspirations, it’s definitely worth thinking about what kind of features you’re after. Many slow cookers also turn their hands to different functions, such as cooking rice, porridge or steaming vegetables, so it’s a good idea to explore a few options before you buy.

Luckily, our list of the best slow cookers you can buy is here to make the decision easy for you. 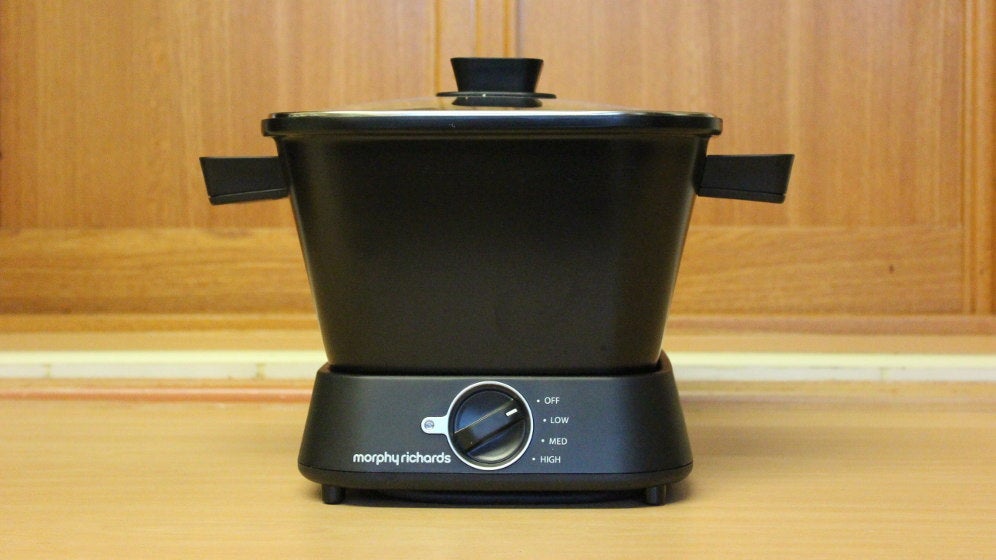 Why we liked the Morphy Richards Sear and Stew Compact

The ‘Compact’ part of the Morphy Richards Sear and Stew Compact is a little misleading, given it actually has a large 4.5-litre capacity in comparison to its 3.4-litre predecessor also in this roundup. But it’s actually this slow cooker’s shape and clever storage that makes it a space-saving winner.

Its square-shaped pot, rather than oval or circular, making it easier to tuck in the corner of a cupboard, and the whole thing also stacks into itself neatly, cable and all.

The other great thing about the Sear and Stew Compact is its ability to sit on the hob; you can remove the pot from the base unit to brown chunks of meat on a burner to seal in flavour. Then, you can pop it straight back on the base unit for stewing. Unlike the unwieldy ceramic cooking dishes that usually come with slow cookers, the Sear and Stew Compact’s pot is a lightweight aluminium affair with non-stick coating, which makes it less of a burden to transfer between the hob and the base.

In all, it’s a good-value and versatile slow cooker for time-poor families who don’t want to live on ready meals.

At the time of review, the Morphy Richards Sear and Stew Compact was available for £49.99 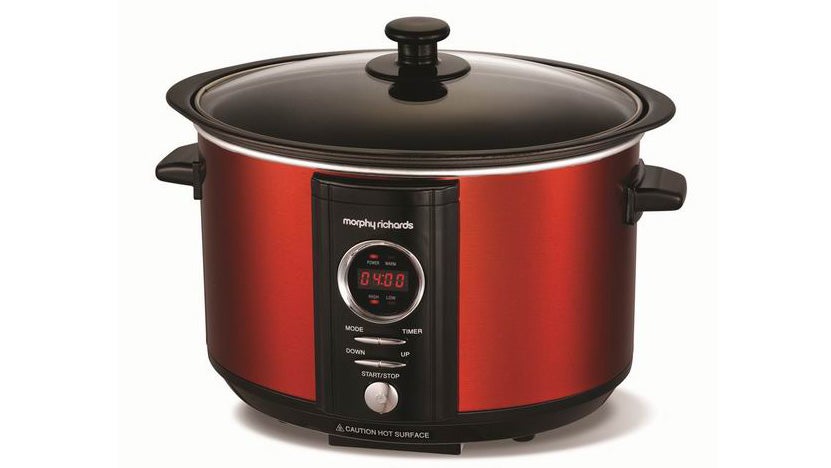 Why we liked the Morphy Richards 3.5L Digital Sear and Stew Slow Cooker

The Morphy Richards 3.5L Digital Sear and Stew is one of the best-looking slow cookers we’ve had the pleasure of testing. Its name is a little misleading, however. The machine doesn’t actually have a built-in sear function, but the cooking pot can be heated on a gas or electric hob, before being placed back in the main unit. This works like a dream; and reduces the amount of washing up. Since the cooking pot is super-light, it’s hardly an inconvenience either.

The digital display is another stand-out feature, and the controls allow you to set cooking times between four and 10 hours. Annoyingly, some dishes don’t need to be cooked for that long, or need to be stirred after an hour or so, which is a slight shortcoming. The lid and non-stick pot are both dishwasher safe, which is great when you just can’t be bothered to put on the rubber gloves.

At the time of review, the Morphy Richards 3.5L Digital Sear and Stew Slow Cooker was available for £59.99 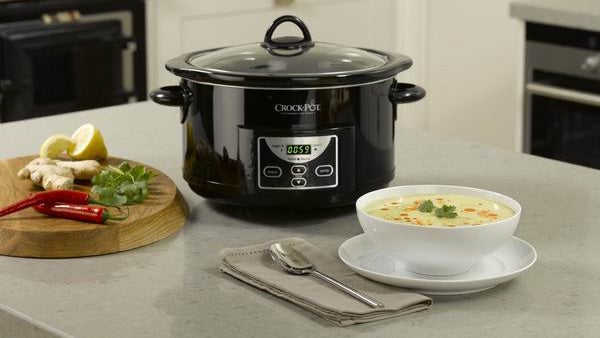 Why we liked the Crock-Pot 4.7L Countdown Slow Cooker

The Crock-Pot 4.7l Countdown slow cooker is built for producing huge meals. Even when it’s only filled to 75% capacity, it still holds 3.5 litres of food, which is more than enough to feed a large family. It isn’t all about sheer size, however. The timer function – which allows you to set a cooking time between 30 minutes and 20 hours (at 30-minute increments) – is fantastic, and is a function not seen on plenty of more expensive models.

Due to its size, and the fact that it uses a ceramic cooking pot, it can become particularly heavy when full – but it also retains heat really well. The solid handles, rubber feet and detachable power cable make it perfect for sitting on the dinner table.

The controls should be simple to use, but are surprisingly confusing at first, due to the ‘select’ and ‘power’ buttons seemingly mixing and matching their functions. It’s still an excellent slow cooker if you have a lot of tummies to keep happy, though.

At the time of review, the Crock-Pot 4.7L Countdown Slow Cooker was available for £52.99 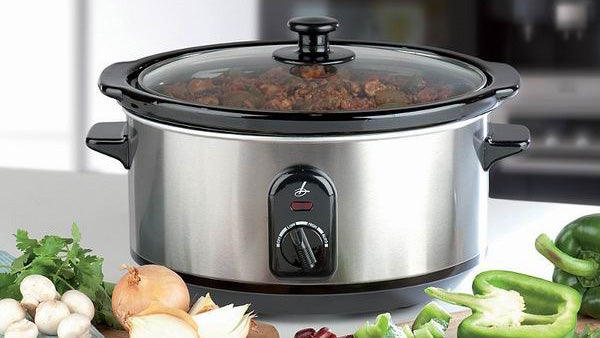 Why we liked the Lakeland Brushed Chrome Family Slow Cooker

The Lakeland Brushed Chrome Family slow cooker is as straightforward a slow cooker as you’ll ever come across. Featuring a single dial with three options (low, high and auto) and a small red light to indicate it’s on, it ships without bells and whistles but gets the job done very well indeed.

As you’d expect, the low setting cooks food under a gentle heat; high shortens the cooking process with a raised temperature; and auto gives you the best of both worlds, initially delivering a high level of heat and gradually levelling that off.

The ceramic cooking pot is a hefty beast, weighing over 2kg when empty. However, it’s also oven-safe to 150oC and retains heat well. What’s more, it’s surprisingly easy to clean. The cooking pot and the glass lid are both dishwasher safe, meaning that you won’t have to wrestle with it in the sink if you’d rather not. This is a high-quality slow cooker that is an absolute steal.

At the time of review, the Lakeland Brushed Chrome Family Slow Cooker was available for £29.99

5. Sage by Heston Blumenthal The Risotto Plus 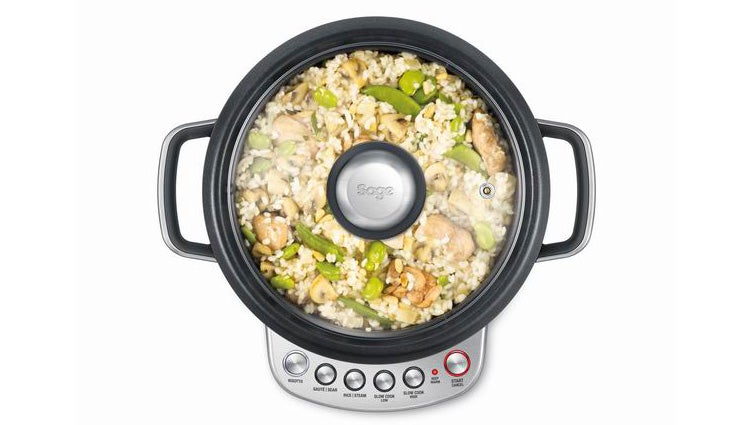 Why we liked the Sage by Heston Blumenthal The Risotto Plus

If you love rice dishes, you won’t find a better kitchen pal than Sage’s Risotto Plus. With five different settings (risotto, sauté/sear, rice/steam, slow cooker low, and slow cooker high), it has plenty on offer – but is also easy to use.

The 3.7-litre capacity can squeeze in 20 cups of cooked rice, and because the pot is non-stick, cleaning up is easy. Build quality is outstanding, too, which partly explains the steep price tag. It comes with a rice paddle, a plastic measuring cup and a large, stainless steel steaming tray.

Risotto famously requires constant attention and regular stirring, but this slow cooker uses bubbles to agitate the rice, producing rich, creamy results. What’s particularly great is the aforementioned sauté/sear function, which lets you sweat down onions and garlic as a base, or even seal meat before throwing in the rest of your ingredients. The Heston Blumenthal recipes that come bundled with it aren’t too shabby, either.

Sage by Heston Blumenthal The Risotto Plus Key Features

At the time of review, the Sage by Heston Blumenthal Risotto Plus was available for £99.99 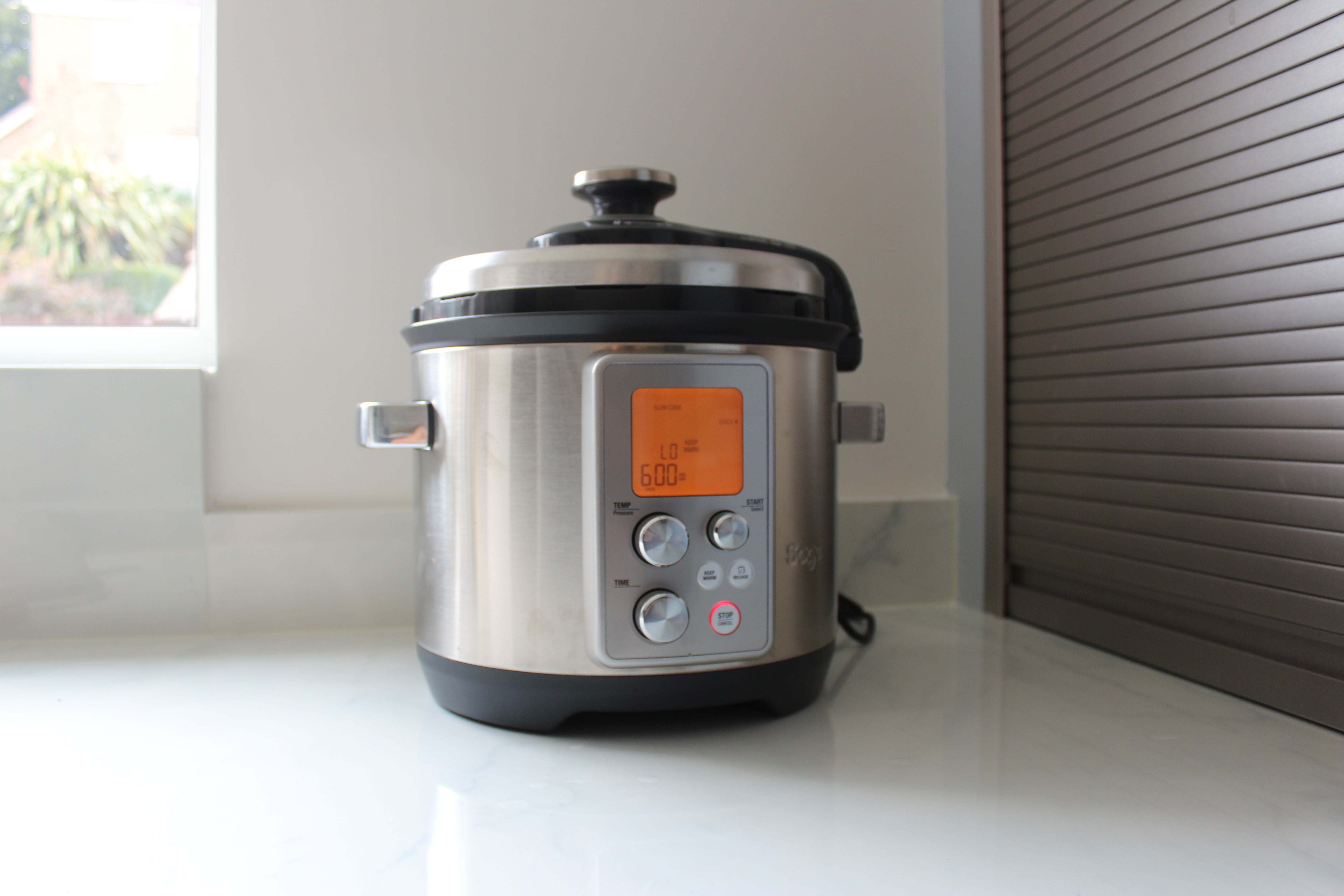 Why we liked the Sage Fast Slow Pro

Part pressure cooker, part slow cooker and all-round kitchen helper, the Sage Fast Slow Pro is designed to shake up your meal times with its versatile approach to cooking.

Not only can it create speedy stews and perfect slow-cooked pot roasts, its programme options include everything from Bolognese and lamb shanks to steamed puddings, rice, veg and risotto.

In general, one-pot cookers look pretty similar, but the Fast Slow Pro has several features that set it apart in the design department. These include chunky side handles that make it easy to move around and an interactive LCD panel to keep an eye on progress.

The controls are intuitive, and there are three dials for altering time, temperature/pressure and choosing a programme. Programmes are extensive and include the ability to sear, sauté, steam or reduce, as well as the option to slow or pressure cook.

Instructions are exhaustive but it’s pretty straightforward to use. Most importantly, results are good and easy to achieve, with many of the frustrations of this style of cooker eliminated. Minimal mess, easy to use and versatile. What’s not to love? 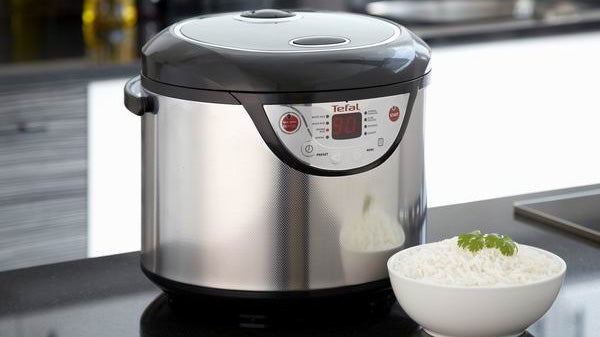 This is quite simply the daddy of slow cookers. Tefal is renowned as a manufacturer of brilliant kitchen utensils and appliances, and its RK302E15 8-in-1 Multi Cooker is hands down the best product of its type that we’ve ever tested. It does everything you’d expect from a slow cooker, and more.

It offers eight programmes: quick rice, white rice, brown rice, grains, porridge, slow cooking, steaming and dessert. Even more impressive is the delayed start function, which allows you to prepare food hours in advance. The keep-warm function stops the cooking process but ensures your food stays hot – so no worries if you’re a bit late to the door.

It’s covered in a fingerprint-resistant, steel finish, and its large handles and detachable cable make it easy to carry to the dinner table for easy serving. A rice paddle, measuring cup and steaming tray are included as standard, and cleaning it up is also a doddle. At £50, it’s terrific value for money, costing just a touch more than a standalone rice cooker or slow cooker.

Best Slow Cooker Round Up