What is the Morphy Richards Sear and Stew Compact?

Slow cookers are fantastic for those who love to come home to a hot dinner, but traditionally, they’ve been big, bulky and heavy beasts. The Sear and Stew Compact is dinky by comparison, combining a one-pot solution with the option to use the cooking dish on the hob. This means that you can brown chunks of meat to seal in the flavour before popping back on the base unit for several hours of low and slow. Even better, once cooking’s done, the cable folds up neatly into the base unit, which can then be stored inside the pot with the lid on top, taking up no more room in your cupboards than a large saucepan. There’s a few recipes included to get you started, such as curries, Bolognese and spare ribs, but once you’re up and running, the Morphy Richards Cook & Create app has more to try. 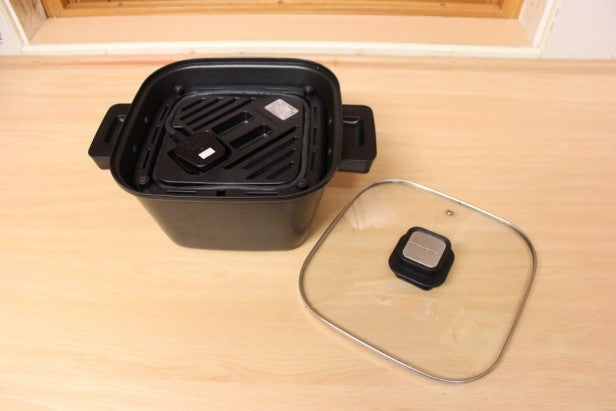 Perhaps the biggest difference between the Sear and Stew Compact and other slow cookers is its modern design. Rather than a weighty ceramic crock, its cooking pot is a neat square shape made from lightweight aluminium with a non-stick coating. There’s plenty of space inside despite its non-standard dimensions – its 4.5-litre capacity serves up to four people, which is more than some equivalents. Chunky handles either side mean it’s easy to transport from hob to base unit, although they get hot during cooking, so it’s best to don gloves. The lid on top will also get warm during cooking but does at least have a smart ‘lid rest’ on the inside, so there’s no chance of accidentally damaging the shatterproof glass when you put it down on the worktop.

A dial on the base unit controls the heat, giving the options of low, medium or high and off. Since there’s no timer, it’s a case of picking a heat level that suits, with low meaning most dishes take between eight and ten hours, medium between eight and six hours and high between four and six hours. Beware removing the lid to check on progress, though, as each time you do it, it’ll require another 10-15 minutes cooking time due to the loss of heat.

Morphy Richards Sear and Stew Compact – What’s it like to use?

There’s nothing to lock the Sear and Stew’s cooking pot onto the base unit but they do fit together snugly, so it’s simple to switch from cooking with the pot on the hob to the base unit. 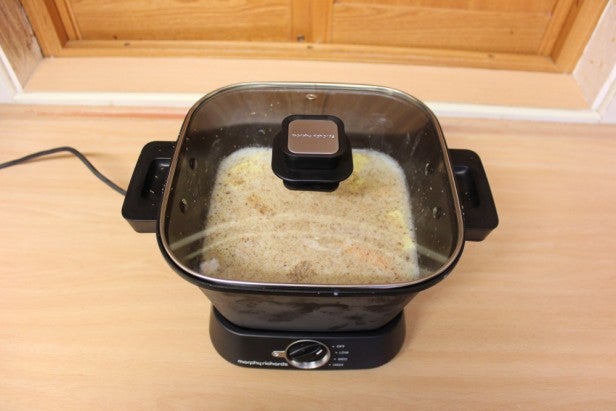 We started by making rice pudding, which didn’t require any hob cooking. Placing milk, sugar, pudding rice, butter and nutmeg into the greased pot and a giving a thorough stir, we set it to cook on high as recommended and left it for four hours, checking on progress halfway through. While the glass lid is handy for checking on the dish, if it’s steamed up it’s hard to see much detail inside. After four hours, the rice was completely cooked, although it looked as if there was still quite a lot of liquid left over. However, after some stirring, the pudding thickened to a creamy texture. Despite cooking within the recommended time, some of the milk had solidified and burnt on the bottom of the pot. However, this came off with a wooden spoon and the whole pot was easy to clean without any residue left behind. The finished rice pudding was sweet, evenly cooked and of a good gooey consistency. 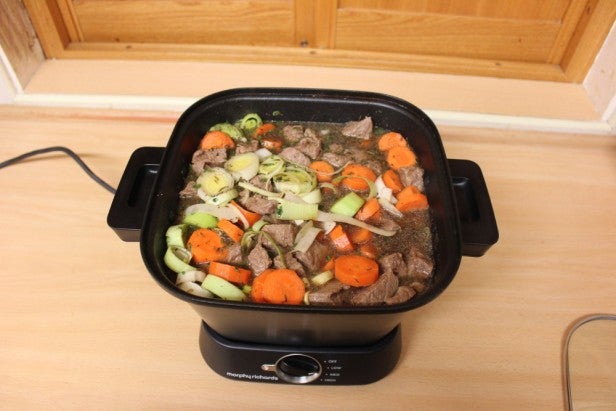 Next, we made a beef stew. This required the meat to be batch browned on the hob and removed, before sautéing onions in the pot. As the pot was quite light, it needed to be held while stirring (with an oven glove) as it balanced on top of the gas burner support. Once the rest of the ingredients were added it was more stable. We then replaced the pot onto the base unit and set it to cook on the medium setting for around six hours. As the lid prevented evaporation, the stew still had a lot of liquid left once cooked, so we added some cornflour to thicken the sauce. The vegetables retained their shape well, although they were still completely cooked and the meat, while a cheap cut and trimmed of the fat, was tender and came apart easily.

Cleaning the pot and lid was simple as any excess food came off with a quick hand wash and rinse. Neither are dishwasher safe, which would make this an even more convenient buy. 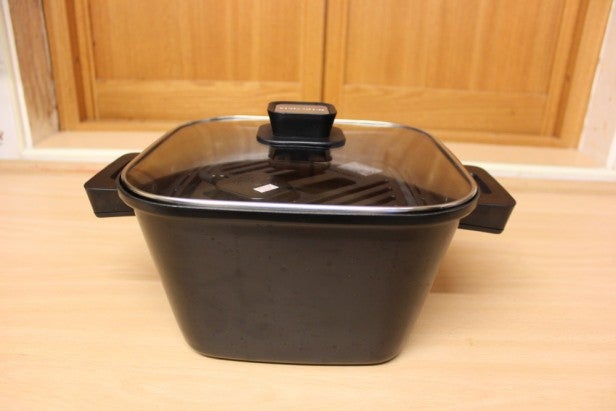 Should I buy the Morphy Richards Sear and Stew Compact?

If you’ve previously thought about getting a slow cooker but decided you didn’t have the space, the Sear and Stew Compact is the perfect buy. Not only does it stack into itself for storage, it takes up just as little room when it’s in use on the worktop. Being able to use the pot on the hob is also a real bonus if you want to stretch beyond the usual chilli and casserole recipes. In an ideal world it’d be induction-compatible, have a timer and a ‘keep warm’ option (for those days when calculating the cooking time by temperature is tricky) but it’s still good value for time-poor people who don’t want to live on ready meals.

Thoughtfully designed, easy to use and with plenty of versatility packed in, the Sear and Stew Compact is a fuss-free way to feed a crowd.