With many of the latest Blu-ray players, TVs and AV receivers boasting network media streaming, the importance of NAS drives and media servers to home cinema fans is greater than ever. They allow you to keep hordes of movies, music and photos stored in a single place, rather than hogging space on your laptop hard drive, and because they’re attached to a network you can access your files from any networked device. The beauty is that you’re not constantly moving content from device to device on USB sticks or external HDDs – it’s always sitting there on the server. 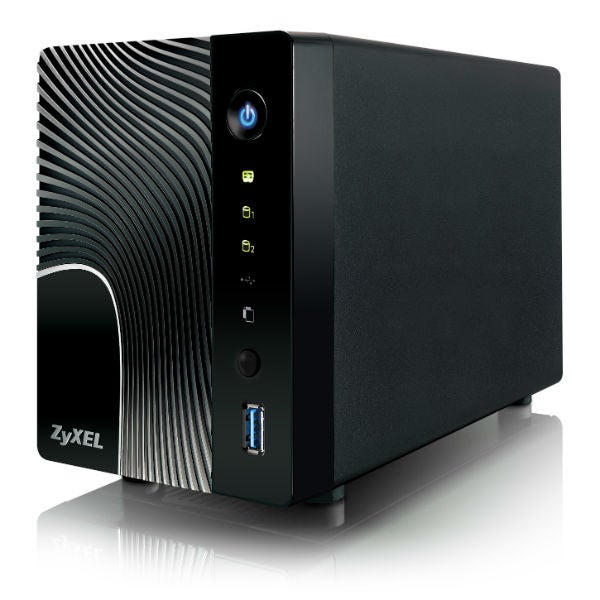 There are plenty of these on the market, but here we’re looking at the latest model from Taiwanese company ZyXEL. It’s a remarkably compact unit, measuring just 108(w) x 147(h) x 205(d)mm, which is great news if you want to tuck it away next to your TV or router where space might be tight. Though if size is a particular concern you may want to consider the Synology DiskStation ds411 slim, which uses smaller 2.5in drives.

It comes in a fashionable gloss black casing with wavy ridges on the front panel and a row of LED indicators down the right hand side. You’ll also find buttons for one-touch copying/synching and power. Overall build quality is slightly disappointing – the front door, which opens to reveal bays for two hard-disk drives, feels plasticky and the overall casing isn’t as rigid as we’d hoped. 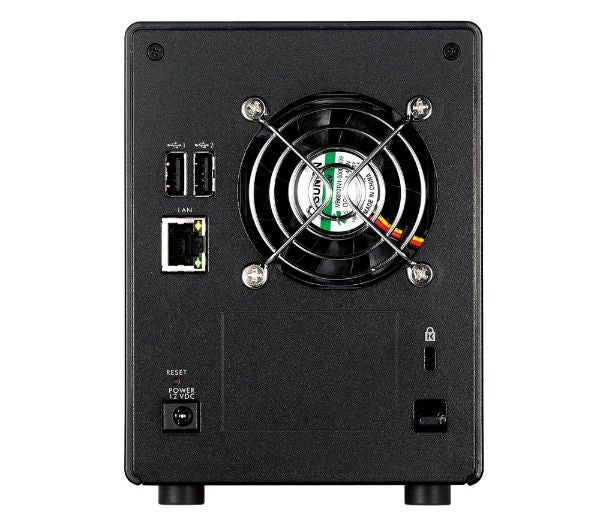 Connections include a USB 3.0 port on the front for super-speedy transfer of media files, while on the back are two USB 2.0 ports, a Gigabit Ethernet port and a socket for the DC power adapter. Dominating the rear panel is an outlet for the Smart Fan, which features speed control, a high temperature buzzer alert and auto shutdown.

It’s a shame that the NSA325 isn’t supplied with any 3.5in SATA II/III hard disks as it’ll add a hefty chunk to the overall cost, but it does support a capacity of up to 6TB. These are slightly fiddly to install – the process involves fitting some plastic brackets, and it’s not immediately clear which way round they go – but there’s a plastic tool stored on the back of the front panel that makes it easier to get them out (although with 6TB fitted we doubt you’ll need to).

The NSA325 packs some decent processing grunt, running a 1.6GHz CPU with 512MB of memory, which provides fast streaming to multiple devices on a network. Not only can it be used as a DLNA/UPnP, iTunes, photo album server and SqueezeCenter, but also as a web FTP/eMule/BitTorrent server. There’s also a one-click hosting sites manager that makes it easy to directly download large files from sites like Rapidshare and Megaupload. 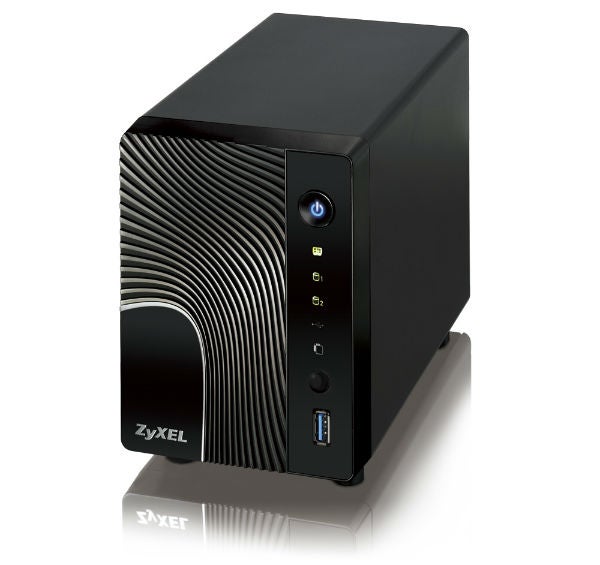 You can even auto-upload photos and videos to YouTube or Flickr, and there’s also a wealth of data management and backup functions – all of which makes the NSA325 a convenient and versatile proposition.

Furthermore, with the new zMedia app installed on your smartphone, you can play content from the NSA325 on your device at home, browse files, check the status of uploads or downloads and configure the system. It also works with DropBox, allowing you to remotely back up files from smartphones and other portable devices wherever you are.

We didn’t have any trouble installing and setting up the supplied Starter Utility software – it requires a username and password to get in, but this is given in the manual and can be changed once you’re logged on.

The NSA325 is managed from a great-looking and practical user interface on your internet browser. Seven cartoony icons are lined up in a row on a blue background, offering access to Music, Photo, Video, Favourites (shared playlists), File Browser, Application Zone and System.

As the name suggests, File Brower lets you wander through the folders and files on any connected hard drives or USB devices, using a rather utilitarian but effective series of lists.

Application Zone is where you’ll find the clever stuff like Broadcatching, which manages frequently updated content like RSS feeds and podcasts, Print Server, FTP, copy/sync features, the internet Download Service and much more. These are listed with links to the appropriate page, which open up in separate windows.

Finally the System menu’s Settings option lets you set your preferences, while the Administration section gives you a detailed breakdown of the NSA325’s status, but does so in a clear, uncluttered menu system. On the whole, this interface is excellent, with the logical structure and clean, attractive presentation making everything easy to locate and operate.

And in action we had no trouble accessing files from the NSA325 on our laptop, Wi-Fi equipped Samsung Smart TV and iPad. None of the file formats we streamed caused any trouble (provided they were supported by the streaming device, of course). As a bonus it also shared the contents of our connected USB flash drive across the network, and files also copy from USB to HDD at satisfyingly fast speeds. General transfer speeds were also good with our large file transer test returning figures of 83MB/s read and 96MB/s write.

Verdict
The ZyXEL NSA325 is a terrific media server, feeding movies and music to your networked Blu-ray decks and TVs in a slick, hassle-free manner, but it’s so much more besides. As a high performance NAS it’s nippy at backing up data and you can also download large files from the web, manage your podcasts or make copies on a USB printer – not to mention the snazzy zMedia app, which lets you play content from your phone. Build quality isn’t the best but that doesn’t greatly affect our admiration for it.