Thin is in. It doesn’t matter if we’re talking laptops, tablets, phones or TVs, these days less is considered more and that even applies to the humble NAS. As such we find ourselves testing the Synology DiskStation DS411slim, an evolution of the excellent (if rather chunky) DS411j. 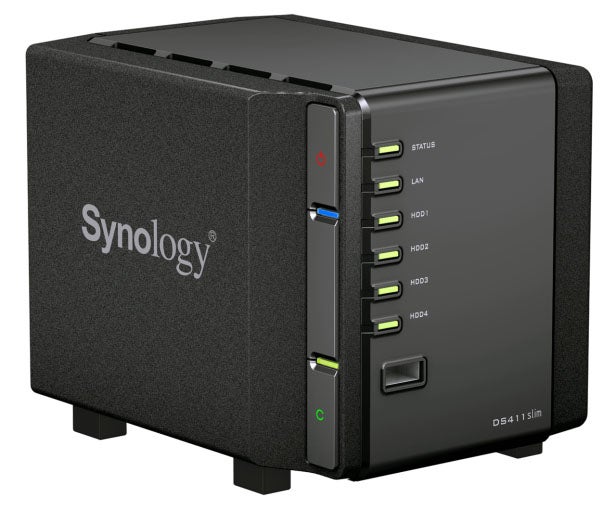 While not strictly a successor (the DS411j supports 4x 3.5in HDDs, the slim just 4x 2.5in) the design of the DS411slim shows just how important svelte lines have become to all aspects of technology. Gone are the DS411j’s white and beige colouring to be replaced by a mixture of matt and gloss black and the jutted front of the DS411j is replaced by a more rectangular and minimalist form factor. The slim also lives up to its name: disk free it measures just 120 X 105 X 142 mm and weighs 660g. All in all the slim is about as attractive a NAS as we can remember, build quality is top notch and drives bays slot in without the need for screws. If this is a glimpse of the styling Synology will use across future lines then it bodes very well indeed.

Equally promising is what Synology has done on the inside. Compared to the heftier DS411j, the slim has received a decent processor bump from 1.2GHz to 1.6GHz while memory has been upgraded from 128MB of DDR2 RAM to 256MB of DDR3. Just a single 60 x 60 x 10mm fan sees the slim produce a barely detectable 21.1dB of noise, though this will change depending on the noise of each drive you add. 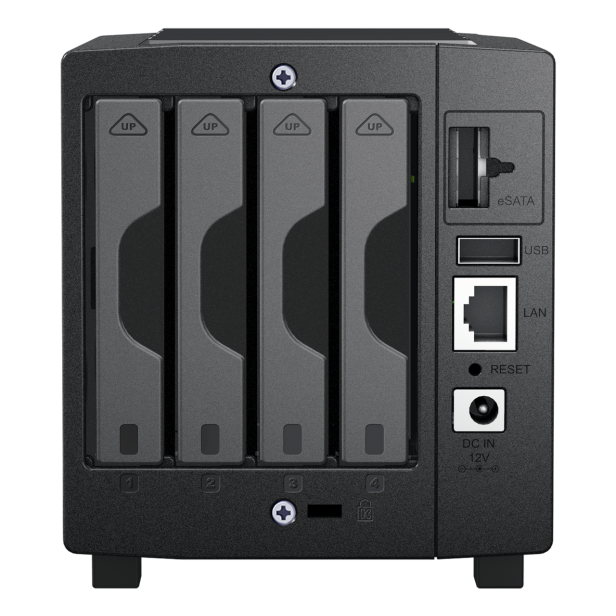 Of course here we hit a snag inherent in any 2.5in-only NAS: capacity and cost. For while the DS411Slim is small, light and quiet and can hold four drives, the most capacious 2.5in HDD is just 1TB. This means a maximum internal capacity of 4TB, or 3TB with redundancy. With 4TB 3.5in HDDs now shipping a larger 3.5in compatible NAS with four bays can hit 16TB. 2.5in drives are also far more expensive per gigabyte so you’ll be paying more for less. It is worth noting the slim has two USB 2.0 ports and one eSATA for connecting additional external drives, but such extra bulk would ruin the point of buying a sleek NAS in the first place. The key message is to remember Synology is selling the NAS equivalent of an iPad nano, not a Classic.

None of which is to say the slim is under featured. Despite its diminutive size the DS411slim ships with the same DiskStation Manager (DSM) software as Synology’s premium lines, including the DS712. For our money DSM is one of the most intuitive NAS user interfaces currently available. It mimics the Mac OS X desktop (a live demo can be tried here) and uses rich graphics and an icon driven windows system (which includes multitasking and drag and drop) to make even complex actions relatively straightforward. This is vital because the functionality of the slim is immense. 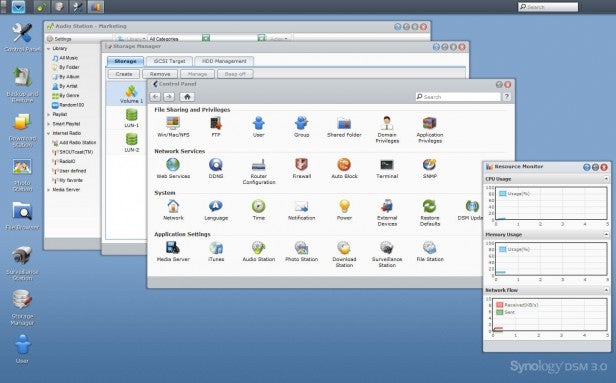 It is *deep breath* DLNA and UPnP compliant, has iTunes Server built in, can stream Internet radio stations or even iPod playback (with optional USB speakers) and downloads over BitTorrent, FTP, HTTP, eMule and NZB (Usenet) without needing a PC. Mobile apps for iOS and Android also enable remote control, data access and printing and with a compatible IP camera the slim offers remote surveillance via a web browser.

Good looks and functionality are nothing without performance in the NAS world and here the DS411slim’s bolstered hardware comes to the fore. Over Gigabit Ethernet (now ubiquitous on all modern NAS) the slim managed extremely impressive read and write times of 57.4MB per second and 42.1MB per second when transferring large 4GB files. By comparison the older DS411j hit just 34.5MB/s read and 26.3MB/s write, in line with the 34.4MB/s and 24.6MB/s of the newer budget focused DS211j. Interestingly the slim’s transfer rates are not far off those for the DS712 (57.2MB/s read and 43.2MB/s write) without Link Aggregation. 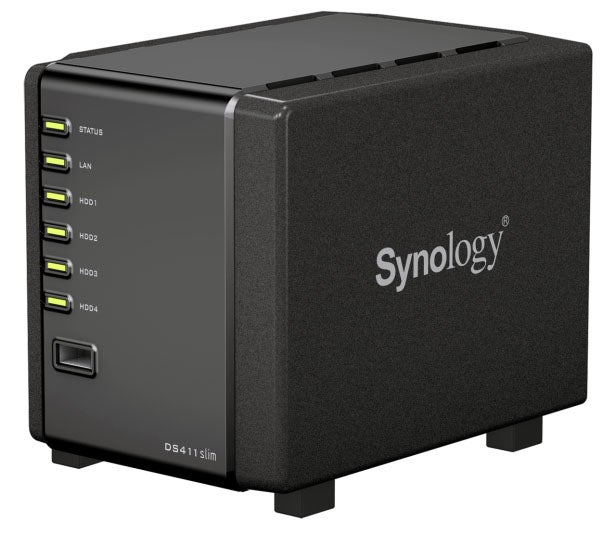 It is a similar story when transferring smaller files. The stop start nature of small files stops any NAS from getting up a head of steam, but at 24.5MB per second read and 21.1MB per second write it again easily bests the DS411j (19.8MB/s and 17.9MB/s), DS211j (19.9MB/s and 18.1MB/s) and plays in the same ballpark as the DS712 (27.1MB/s and 23MB/s). All of which goes to show when transferring large files 2.5in HDDs are not the speed bottleneck many would have you believe (we used 5,200rpm drives) while transferring small files exposes the weakness in all HDD access times no matter how powerful the NAS. 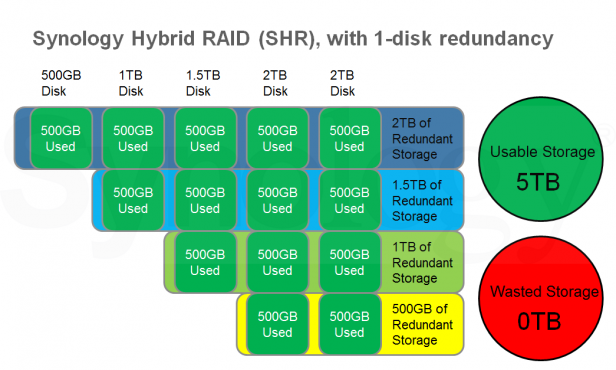 It is worth mentioning these results were attained using Synology’s Hybrid RAID. Like Netgear’s X-RAID, SHR allows for disks to be dynamically swapped out for larger volumes without powering down the device. When the new drive is inserted the array is rebuilt automatically and all content is available throughout the upgrade process. SHR is highly efficient as well (storage examples are shown above), though if you want to use a more standard option, JBOD, RAID 0, RAID 1, RAID 5, RAID 5 Spare, RAID 6 and RAID 10 are all available.

So ultimately – unless you crave the capacity of 3.5in drives – the only aspect which can bring down the DS411slim is price. Happily Synology has got this right as well. The slim retails for £229 and while a quick search online reveals minimal web discounts this still makes for an eminently affordable and remarkably stylish NAS device. Yes naysayers will point out that 3.5in-compatible NAS cost little more upfront and subsequently save money because of 3.5in drives’ cheaper pricing, but that would be to miss the point. In the slim Synology has created a NAS which is every bit the performance and functionality rival of its larger siblings, but with a more living room friendly demeanour. 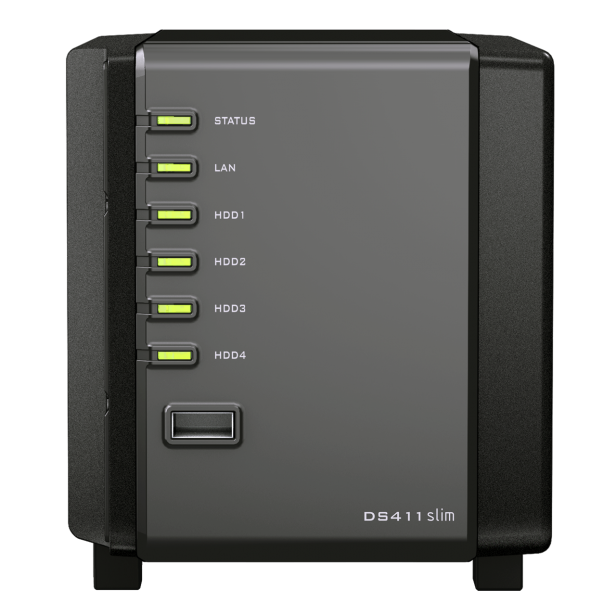 ”’Verdict”’
The Synology DS411slim won’t convert those looking for a capacious 3.5in NAS, but it isn’t meant to. Instead the slim sheds size and decibels to create a diminutive yet powerful alternative for those happy to compromise storage but not performance. Synology’s DiskStation Manager also remains one of the most ingenious and easy to use NAS UIs on the market and extras like mobile apps, security camera and printer support make it a thoroughly comprehensive solution. Tying it all together is a price tag which won’t break the bank, just remember to factor in the higher cost of 2.5in drives.