What is the Z-Edge Z2 Plus?

The rapid dashcam market growth of the last few years shows no sign of abating. Zero Edge, also known as Z-Edge, joins the fray with the Z2 Plus. The main hardware looks the same as the RAC O3, but this unit also includes a second camera for rear viewing. Although Zero Edge is registered in the USA, the products are made in China, presumably by the same supplier as RAC uses, although there are differences. Let’s see whether Z-Edge has added its own special sauce to the hardware…

The biggest difference between the Z2 Plus and the RAC 03 for which it’s a dead ringer is that this bundle also comes with a rear-view camera. But before I get to that, let’s take a look at the main unit. Like the RAC 03, the Z2 Plus also shoots at a maximum resolution of 2,304 x 1,296. 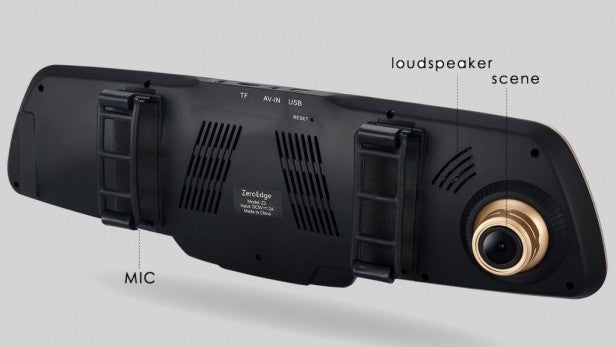 The highest-res footage is shot at 30 frames per second, and other options at this rate include Full HD (1,920 x 1,080) and 720p. The latter is also available at 60 frames per second. There are two quality settings available, too – Fine and Super Fine. But there’s no mention of the size of the sensor from Z-Edge, just that the lens has a 120-degree field of view.

The rear camera is not so accomplished as the front one, and only shoots at 720p and 30 frames per second. At the top quality setting, video is recorded at 15.7Mbits/sec from the front camera and 11.8Mbits/sec from the rear, so the bundled 16GB microSD card is enough for around 78 minutes of footage from both cameras.

Z-Edge Z2 Plus – Mounting and Connectivity

The most notable physical feature of the Z2 Plus (and RAC 03) is that, unlike most dashcams, it isn’t a separate device you’re meant to position near the top of your windscreen. Instead, it fits over your current rear-view mirror and significantly upgrades its size. This, of course, requires that the method used to attach your rear-view mirror to your windscreen is sufficiently strong to hold the extra weight.

The camera sits on one end and can be adjusted so that it points properly forward. The 5-inch viewing screen is embedded within the huge mirror, and remains hidden when not in use. The Z2 Plus then operates as an extra-large mirror. This is quite handy, as it’s always beneficial to have a better view of the surroundings when driving.

A Mini USB connection is used to supply power, and the car adapter included isn’t on a captive cable. It also comes with two standard USB outputs, which in theory means you can power a sat-nav or charge your phone at the same time as having the Z2 Plus powered up. I found it worked just fine with a TomTom sat-nav.

However, on the downside the USB plug supplied sticks out of the top of the unit by over an inch, which in my car made it impossible to set the mirror straight, as the plug fouled the roof of the car. The plug should really have been angled so that this wouldn’t be a problem. I also had to be careful not to bend the plug and thus lose the power connection.

The secondary camera is small and supplied with a very long cable culminating in a Micro USB connection, which plugs into the main Z2 Plus unit. This cable also includes a red wire with a bare contact at one end, which is meant to be connected to your car’s reverse light. With this attached, the Z2 Plus screen will automatically show the view from the rear camera, with some guide lines, when your reverse gear is engaged. 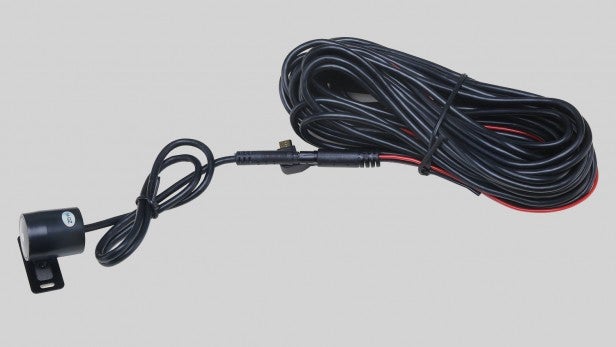 Due to this feature, Z-Edge suggests two installation options for the reverse camera. It can either be installed at the top of your rear window (in a position that won’t obstruct your view), or (for the reversing function) just above your rear numberplate. The camera is waterproof, so you can safely have it outside the vehicle. It can simply be stuck on, or two screws are included if you want the installation to be a little more permanent.

However, apart from a parking function with motion detection, which will record footage when the G-sensor or camera picks up activity, there aren’t any extra safety features included with the Z2 Plus. There’s no lane departure warning or collision detection, nor any safety-camera warnings. There’s no GPS built in, either, so your location isn’t captured alongside the video.

Since the Z2 Plus doesn’t have a huge range of features, the menu isn’t particularly extensive. You can change the video quality and decide how to date-stamp the video, plus alter a few other settings. You can also configure the parking sensor. And that’s about it. The four buttons along the bottom of the unit have multiple uses, depending on whether you press them quickly or hold them down.

Front camera video quality is functional, although you do have to be pretty close to a car to be able to read its numberplate. Colour is faithful, but there are obvious compression blocks that reduce the level of detail. Overall performance is passable, but below average. The rear-facing camera, on the other hand, produces a rather noisy image that’s more susceptible to varying contrast than the front camera.

You can watch a sample of footage shot with the Z-Edge Z2 Plus front camera here.

Should I buy the Z-Edge Z2 Plus?

The Z-Edge Z2 Plus Z2 Plus was available on Amazon.co.uk at the time of writing for just £85.99, which is an absolute bargain for a dashcam that includes a rear-view camera as well. For its near-£200 list price it’s not such great value, and for £50 more you can get the much more accomplished Thinkware F770 with rear-view camera.

The bundled rear-view camera is a bonus, but with no GPS and mediocre image quality, the Z-Edge Z2 Plus is an also-ran in the dashcam market.