What is the Thinkware F770?

The F770 is the flagship dashcam from Thinkware, which is strange considering it doesn’t have a built-in LCD panel, unlike the X550. But it does similarly have the option of a permanent car-installation kit, or can be purchased as a removable unit for the same price – installation by Chameleon is £59.99 extra. I was sent the £249 bundle with a rear-view camera as well.

The F770 uses a Sony Exmor CMOS, like its lesser X550 sibling. However, this sports a 2.19-megapixel resolution, which is slightly lower than the X550’s, but the sensor is still 1/2.9-inch in size, so the lower resolution might actually improve sensitivity, since each pixel will be slightly larger. There’s no Super HD resolution available, however, just Full HD 1080p at 30 frames per second. 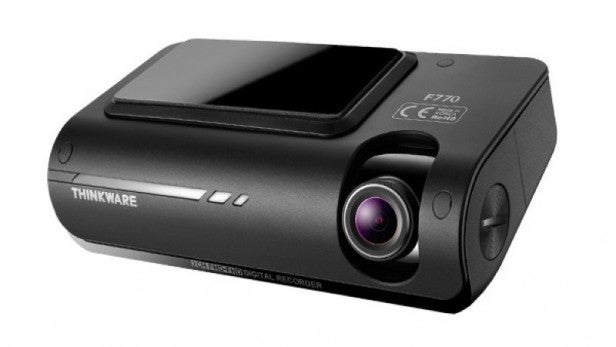 Footage is recorded at a fairly respectable 9.5Mbps bitrate on the front camera, with mono 48kHz audio at 728Kbps, although you can turn audio off with one of the buttons on the unit. If the rear-view camera is attached, the footage from this is captured at a lower 8Mbps, with a further addition of mono audio at the same data rate.

All the footage is captured to microSD card, with either 16GB or 32GB supplied in the box, depending on which bundle is purchased. With a 16GB card installed, there’s enough space for around 200 minutes of footage from the front camera only. With both front and rear cameras recording, a 16GB microSD card would be enough for 112 minutes of footage with audio. But in either case the F770 will loop, overwriting the oldest files with new ones, unless they have been tagged as an incident.

Mounting the F770 is a little different from other dashcams I’ve tested. It’s meant to sit on your windscreen, with the mounting directly stuck onto the glass. The unit itself can’t then be angled. Instead, the camera can be tilted until it points the right direction – just left or right, not up nor down. There’s a large slot on the left that you can fit a screwdriver, key or coin into for rotation.

Obviously, without a screen, you can’t see where the lens is pointing. To combat the deficiency, the F770 sports Wi-Fi access, and you can download a free app to connect to this. The process is identical to action cameras that have Wi-Fi. You simply press the Wi-Fi button on the F770 to enable the wireless signal, then search for the network with your smartphone and enter the password specified in the quick-start booklet.

Once the smartphone is on the F770’s Wi-Fi network, the app will connect to it and the F770 will announce verbally that this has happened, pausing recording. The app then gives you a variety of options, including live monitoring of what the camera can see, with guide marks so you can ensure positioning is correct. This is important for some of the advanced features I’ll be talking about later in this review. 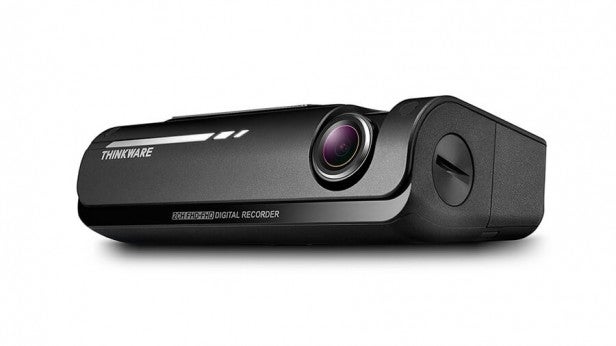 If you have the rear-view camera attached (see below), you can switch the Live View between front and rear. There are separate brightness controls in the Dash Cam Settings section for both cameras, but otherwise all settings are global and affect both devices. The wide-dynamic-range option is global, and boosts detail in bright or dark regions.

The remaining settings relate to recording functions. These include the sensitivity of the G-sensor when detecting impacts as incidents, configuring the Parking recording mode’s motion sensitivity, and toggling Super Night Vision. There are also settings that turn off the device when it senses the input voltage has dropped below a certain level, so it doesn’t drain your battery in standby mode. The advanced options, described later, are also turned on and configured here.

From within the app, you can browse recorded files by category. These include regular continuous recordings, ones that have been tagged as an incident, footage grabbed in Parking mode and incidents in Parking mode, plus manual recordings. You can also copy files from the Dual Save feature. This is a special function where built-in memory is used for incident recordings, so that if the incident has damaged the removable memory card you will still have the files.

The F770’s Rear View Camera is a bundle option that adds £50 to the price, but also includes a 32GB microSD card in place of the 16GB one. The camera is tiny, designed to stick unobtrusively to a rear window using a small 3M adhesive patch, and contains little more than a Sony Exmor CMOS sensor and a lens, plus some processing circuitry.

Everything else comes from the main unit to which it’s attached. A very long USB cable is supplied for this, although no fixings are included. You’ll either need to tidy the cable route around your car yourself, or include this with the installation of the main unit. 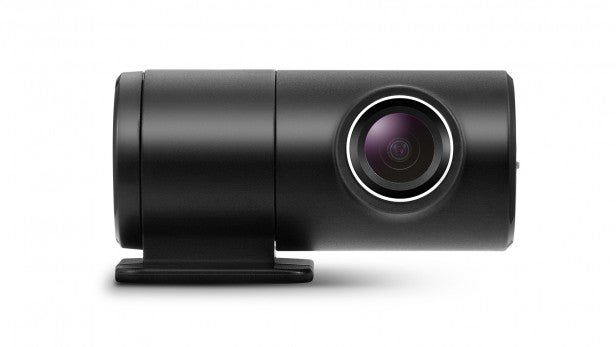 Once connected, the Rear View Camera records footage onto the main unit alongside footage from that unit. It starts and ends recording at the same time. The Rear View Camera has the same 2.19-megapixel CMOS as the F770, and shoots Full HD. Hence the inclusion of a 32GB microSD card, as the combined data rate will use up storage more quickly.

Thinkware makes some bold claims about the F770’s video quality, particularly in low light, with noise reduction and an Adaptive Colour & Contrast System (ACCE). Footage certainly is on the higher end of what I’ve seen from other Full HD dashcams, although better detail is available from some that offer Super HD and above, in particular the VicoVation Opia 2.

Footage shot on the rear camera is also pretty good, as you would expect given it has the same sensor and what looks like the same lens too. However, the lower data rate is also evident, with slightly softer detail and more noticeable artefacts in fast motion.

Alongside the ability to keep a video record of your journeys, there’s a built-in GPS to store the location alongside this, which can be viewed using the desktop app. Safety-camera alerts are built in, and as with the X550, these are announced clearly and accurately, making this a useful function. Updated databases can be downloaded for free from the Thinkware.com website.

There’s also the ability to warn you when you approach the car in front too closely, as well as notification that you’re straying from your lane on a motorway, and an audible message when the car in front moves in a stationary traffic queue. I’ve always found these features a little gimmicky, but at least they’re there if you do consider them useful. 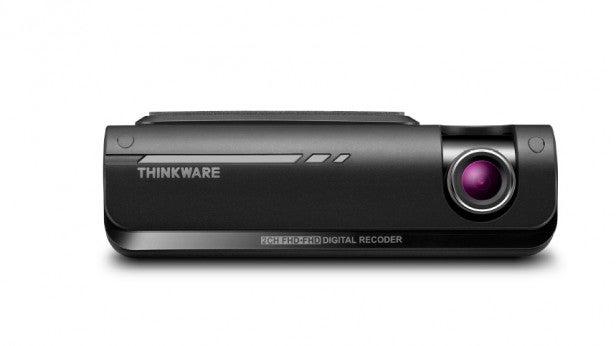 Should I buy the Thinkware F770?

The Thinkware F770 offers good image quality and features. The rear-view camera, albeit also available for the X550, is a particularly useful and well-integrated optional extra that doesn’t add a huge amount to the cost.

This is still a pricey dashcam in total, and the lack of a screen with accompanying reliance on your smartphone make it a little more fiddly to set up initially, but its abilities are comprehensive.

The Thinkware F770 might lack a screen, but its dashcam features are extensive, particularly if you add the optional rear-view camera.