The YAS-103 is a ‘one-body’ soundbar that delivers powerful home cinema sound without the aid of an external subwoofer. It’s one of two new models recently launched by Yamaha – the £180 YAS-93 lacks the YAS-103’s Bluetooth and app control but is otherwise identical.

We’ve been hit by an avalanche of soundbars, bases and 2.1 solutions recently (not literally) which shows how competitive the market is right now, but we’re hoping Yamaha’s enviable audio background and healthy soundbar track record will stand it in good stead.

The YAS-103 takes its design cues from previous Yamaha soundbars like the YAS-152, sporting a sleek gloss-black finish, curved bodywork and round Saran net speaker grilles at both ends. The finish feels plasticky but that can be forgiven at this price.

It’s snazzy without going over the top and will make an attractive partner for any black flatscreen TV, although it seems incongruous next to our silver Samsung set – the alternative white finish would be better here.

At 115mm deep, it’s not a slender soundbar like the Humax STA-1200BSW, but that added cabinet volume helps the Yamaha deliver deeper bass output. It’s 890mm width makes it better suited to larger TVs, probably over 40in.

It’s designed for tabletop or wall mounting. For the former, there’s a pair of feet on the bottom (which can be removed for wall-mounting), providing a steady, vibration-free platform.

Because they raise the soundbar up to 109mm high, there’s a good chance it’ll block off your TV’s infra-red receiver, but the YAS-103 has a built-in IR repeater that passes signals from the remote to the TV.

The front panel is blissfully free from clutter. A row of discreet lights indicates which input and sound mode is selected, although you can’t see what they relate to unless you’re up close. They also light up in a row when you’re adjusting the volume and flash when activating sound modes. We’d prefer an LED readout but Yamaha’s system is easy enough to follow. Also on the front are input, volume and standby buttons. 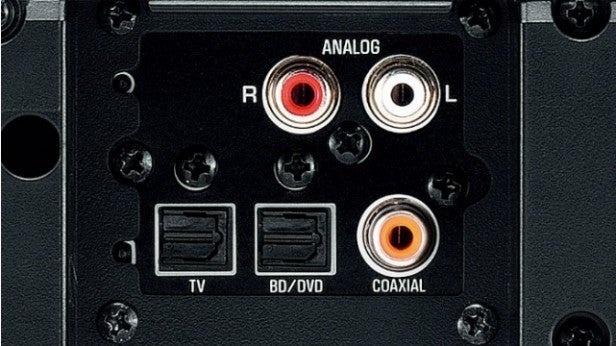 A cramped recess on the back offers coaxial digital, analogue stereo and two optical digital inputs. The inclusion of two optical ports is a real bonus – you can hook up a Blu-ray deck to one and take advantage of the Yamaha’s built-in Dolby Digital and DTS decoding while using the other to enjoy sound from your TV’s built-in tuner.

The lack of HDMI ports will be off-putting for people who want ARC, 3D/4K passthrough and CEC; others might welcome the lack of complexity these features sometimes bring. There’s no USB port either, but you can always hook up a portable device to the analogue input or stream tunes over the built-in Bluetooth connection.

Joining Bluetooth on the spec sheet is Yamaha’s Air Surround Xtreme, which purports to deliver a 7.1-channel surround effect, with ‘clear dialogue in the front and dynamic sound action at the back’.

The lack of an external subwoofer has led Yamaha to incorporate all sorts of bass-boosting technologies, including Advanced Bass Extension Processing, dual 7.5cm woofers and a long, straight reflex port with an outlet shaped like a trumpet bell, which helps reduce ‘wind noise’ (oh, grow up – Ed). 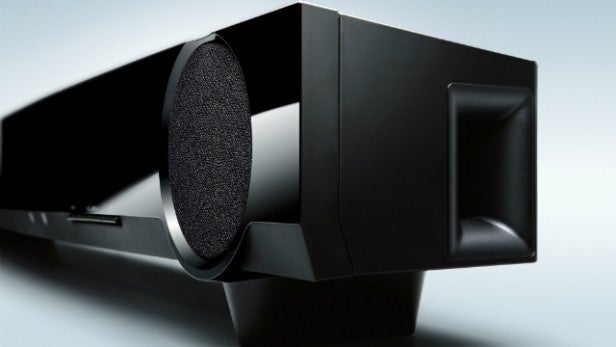 The lack of a separate subwoofer makes installation a simple process. Just plonk it down and plug it in. As mentioned, the tiny lights and even tinier front lettering make it impossible to see what’s selected from the sofa, which means you have to keep getting up.

There isn’t a great deal to configure, apart from the subwoofer level and a choice of Stereo and Surround modes. These can be tweaked using the dedicated controls on the small but perfectly formed remote. 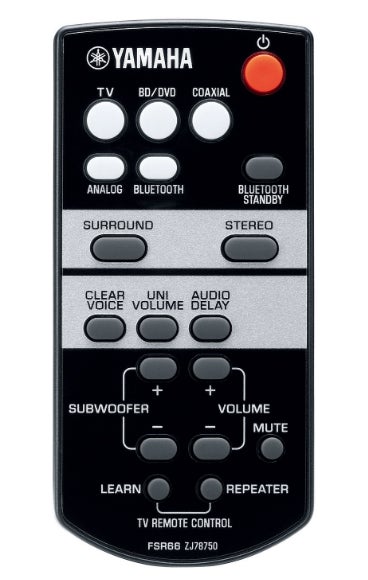 The buttons are all clearly labelled and sensibly arranged, with separate controls for the main and subwoofer volumes. There’s a button for each input at the top, plus individual keys for Clear Voice, UniVolume and audio delay further down.

For added convenience, you can also programme the YAS-103 to learn your TV’s remote commands, allowing you to control volume or turn on your TV and soundbar simultaneously.

Install the free app on an iOS or Android smartphone and you can use it to carry out basic functions like selecting surround modes or adjusting volume. You also get a choice of sound EQ modes not accessible from the main remote (Movie, Sports, Game, Music, TV), which is unfair on those without smartphones. A Bluetooth standby mode turns the soundbar on when a Bluetooth connection is made, and off when it’s terminated.

Unleashing the YAS-103 on our current crop of test discs, we can only marvel at how this unassuming soundbar is able to bring such drama, excitement and scale to movies without the help of a separate sub or surround speakers.

Pacific Rim’s opening battle, in which Gipsy Danger squares up to the Knifehead Kaiju off the Alaska coast, is reproduced with impressive size and slam. Every bang, roar and punch sounds forceful and dynamic. There’s a little straining and midrange ‘honk’ as we edge towards the upper end of the volume range, but it’s within acceptable limits.

What really stands out is the YAS-103’s bass presence, proving that the built-in woofers, reflex port and bass processing are an effective team. The rumbling waves sound deep and thunderous, while the Kaiju’s roar and the robot’s thumping footsteps fill the room.

A little more control wouldn’t go amiss though. We occasionally found ourselves fiddling with the subwoofer level to quell the booming, but most of the time it fuses well with the mids and creates a generally solid, cohesive sound.

The YAS-103 also serves up enjoyable high frequencies, lending a crisp edge to effects and voices. The hissing rain and the Jaeger’s creaky electronics cut through the cacophony of battle, and bring a nice sense of texture to quieter atmospheric settings.

Crucially, it’s more detailed and incisive than the YAS-152 (the last Yamaha soundbar we tested) which we felt was a little too closed in. Here, the soundstage is open, with a nice spread of effects across the front. Air Surround Xtreme creates a busier and more spacious front image but we really wouldn’t describe the effect as surround sound.

The Yamaha also makes a huge difference to the quality of TV shows. It’s very pleasing to hear drama shows and soaps suddenly being delivered with oomph and drive (compared with the anaemic output from our TV’s speakers) while the added bass depth shows the Pointless theme tune in a whole new light. Clear Voice does a terrific job with dialogue, bringing documentary narration to the forefront of the mix and locking it to the screen.

We’re also impressed by the Yamaha’s musical capabilities. Soundbars aren’t primarily designed for music replay, but the crisp treble, punchy basslines and natural-sounding vocals make for a palatable, well-balanced listen. The ease and convenience of playing tunes via Bluetooth is a huge bonus too. 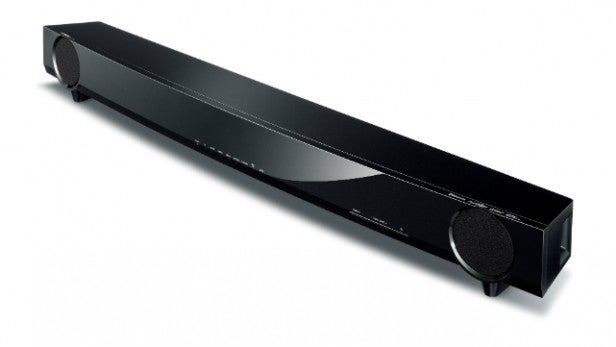 The YAS-103 is an impressive soundbar for the money. Its sleek, attractive cabinet musters a room-filling sound without the help of an external sub, which means you don’t have to compromise on bass punch just because space is limited. It’s also easy to set up and operate, while built-in Bluetooth makes music streaming a breeze.

On the flipside, those who want HDMI inputs need not apply and there are one or two small sonic flaws, but that aside the YAS-103 is a terrific TV sound upgrade.

Yamaha’s stylish ‘one body’ soundbar delivers a big bassy sound from a single box and throws in some tasty features.

Next, see our pick of the Best Soundbars