What is the Xiaomi Mi Mix 2?

While Apple may be making headlines this year with the slim bezel of the iPhone X, it’s by no means the first company to enter this arena.

Samsung’s Galaxy S8 famously asked consumers to ‘unbox’ their handset, but prior to that, Chinese company Xiaomi had established the full-screen vision with 2016’s Mi Mix.

That device was more a concept phone, but Xiaomi is back with a sequel handset that’s set to spearhead its long-overdue expansion into Europe. The Mi Mix 2 boasts a 5.99-inch screen surrounded by a metal chassis and a ceramic back panel. Powered by Qualcomm’s Snapdragon 835 chipset and packing 6GB of RAM in its base configuration, this is unquestionably a top-tier device – yet it can be purchased from online re-sellers such as Gearbest for around £440.

The original Mi Mix was something of a beast, even though its edge-to-edge display reduced its bezels (on three sides, at least) to practically none. Xiaomi has modified the design of the Mi Mix 2 slightly in order to make it more manageable in the hand – the display has dropped from 6.4-inches to 5.99-inches.

We’re still firmly in phablet territory here, but compared to other 6-inch handsets the Mi Mix 2 isn’t as big as you’d expect. That gorgeous LCD screen fills almost the entire front of the phone; the chin at the bottom remains, but is smaller than it was on the original Mi Mix.

The rounded edges of the Mi Mix 2 are very ‘iPhone’. The rear is of a premium-feel ceramic material, which – while something of a fingerprint magnet – makes the phone look stunning. It’s also scratch-resistant, but don’t expect it to remain in one piece if you happen to drop the device; Xiaomi bundles in a protective case with the phone for good reason.

The super-fast fingerprint scanner is positioned on the rear of the handset, and above it you’ll find the 12-megapixel camera, which is surrounded by a rather fetching gold-plated ring.

The bottom edge of the device is home to the USB Type-C port and one of two speakers (the other is in the earpiece), and the volume and power buttons reside on the right-hand edge. The SIM card tray – which accepts two nano-SIMs at once – is on the opposite edge. The use of metal and ceramic gives the Mi Mix 2 some serious weight, but it’s balanced nicely and feels reassuringly robust. If someone told you this was Samsung or Apple’s latest handset you wouldn’t question it for a second; it’s utterly gorgeous.

Unfortunately, Xiaomi hasn’t been able to include any kind of water- or dust-resistance . In addition, it’s also lacking a 3.5mm headphone socket, although the manufacturer has been kind enough to include an adapter in the box.

As mentioned, the 5.99-inch IPS LCD screen dominates the front of the Mi Mix 2, and is covered by super-tough Gorilla Glass 4 for protection.

Its 1080 x 2160 resolution offers a pixel density of 403ppi, which results in pin-sharp image quality. The panel is bright, colourful and striking, with superb viewing angles and good legibility in direct sunlight. The tall and slim 18:9 aspect ratio means the phone isn’t too wide to hold in one hand, either. 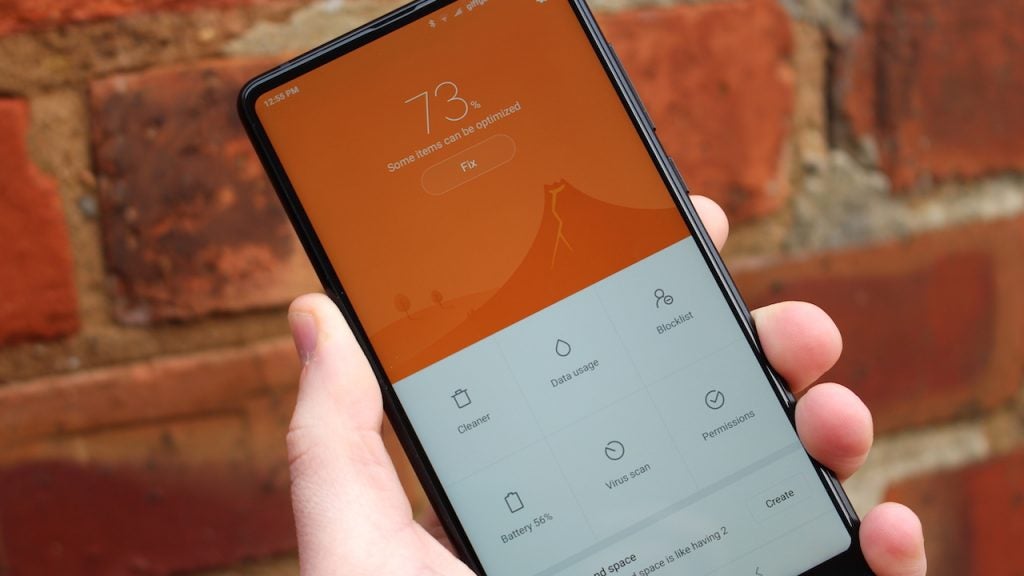 With Qualcomm’s Snapdragon 835 chipset calling the shots, it goes without saying that the Mi Mix 2 is blessed with lightning-fast performance. 6GB of RAM is included in the base model; a more expensive variant has a whopping 8GB.

The end result is a phone that can handle pretty much any task you throw at it. Switching between apps is smooth and stutter-free, and intense 3D games run beautifully. This really is a flagship phone experience in terms of performance, with no corners cut whatsoever.

It might not be obvious the moment you turn it on, but the Mi Mix 2 is armed with stereo speakers, one on the bottom edge and the other in the earpiece – a similar approach to that taken by Apple with its phones.

The key difference here is that the quality of these speakers is noticeably weaker; bass is non-existent and the earpiece speaker is rather feeble. As a result, it often sounds like there’s only one speaker working, which is a shame.

Still, at least Xiaomi opted to include a real earpiece this time around – the original Mi Mix used “cantilever piezoelectric ceramic acoustic technology” to essentially vibrate the phone’s frame to create sound. As impressive as this technical feat was, it resulted in a very low call volume. This isn’t an issue with the Mi Mix 2, thanks to its more traditional earpiece. 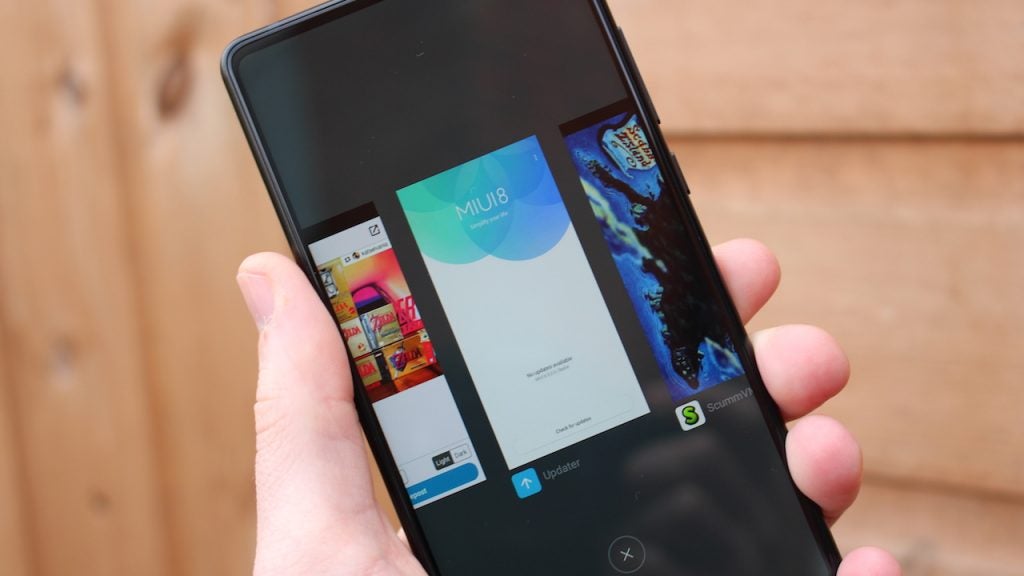 Like many other Android handset makers, Xiaomi installs its own user interface skin over the top of Google’s core mobile OS. MIUI has been around for quite some time now, and is one of the more extreme UI skins. In the past it’s been branded ‘iOS on Android’, thanks to the fact that it borrows many thematic elements from Apple’s software.

Over the past few updates this has changed, but there are still a few similarities. The most obvious is the lack of an app drawer. On the whole, though, MIUI offers some neat innovations of its own, alongside the typical deep customisation for which Android is famed.

You can download homescreen and app icon themes, create a ‘second space’ for the installation of more than one copy of the same app, and even randomise your lockscreen wallpaper, pulling images from Xiaomi’s servers to ensure you have a different look for each day.

The Mi Mix 2 we reviewed ships with MIUI 8.5, which sits on top of Android 7.1.1. MIUI 9 has just been launched and is slowly but surely being pushed to Xiaomi’s 2017 handsets as we speak. It’s still based on Android Nougat, but comes with a raft of improvements, including the ability to run two apps on-screen at once – just like Samsung’s phones.

Xiaomi is pretty aggressive when it comes to OTA updates and works with its community to eliminate bugs and factor in requested features. This makes MIUI a pretty exciting prospect. However, if you find you don’t like Xiaomi’s vision for Android, you can always install the Google Now Launcher to make it at least look like a stock Google experience. 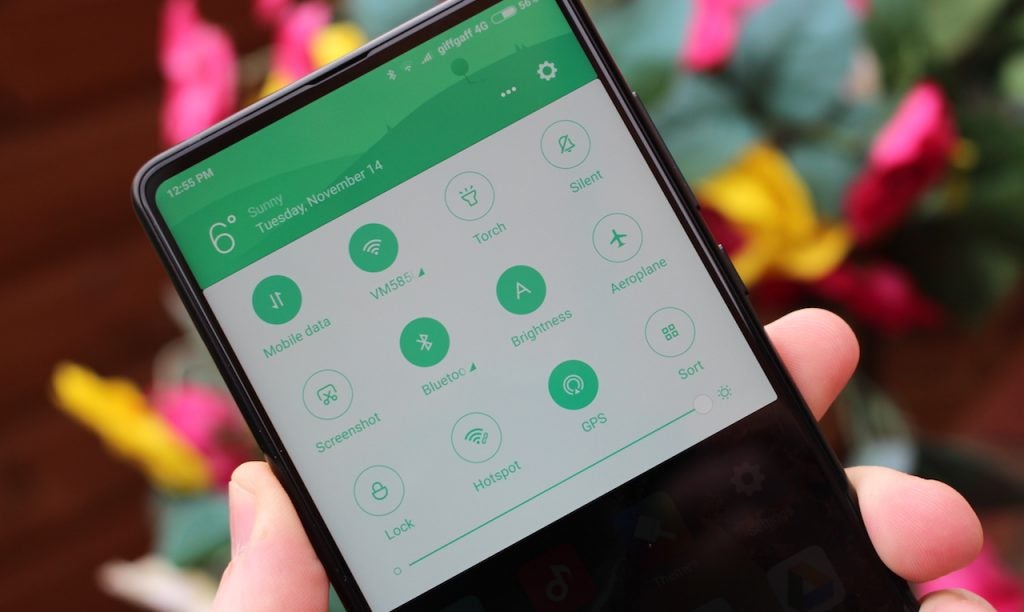 Note that the unit we were sent in for review ships with the Chinese version of MIUI. While this does have an English language option, it comes preloaded with apps intended for the Chinese market.

It also refuses to play nice with some location-based services, which expect you to be in the Far East. It lacks official Google app support, and while it’s perfectly possible to install all of the relevant components to get Google’s ecosphere running, the phone still tries to push you back to Xiaomi’s own digital storefront whenever it can.

With a bit of effort it’s possible to install the global version of MIUI – which eliminates almost all of these annoyances – and that’s something we recommend you do at the earliest possibly opportunity. A word of warning, however: it’s anything but a straightforward procedure and requires you to unlock the phone’s bootloader and flash new firmware updates using PC-based software.

Unfortunately, low-light shooting is a hit-and-miss affair, with the sensor struggling to allow in enough light for a decent shot – even when aided by the handset’s custom low-light shooting mode. Admittedly, the speedy dual-tone flash doesn’t help in these situations either, since it tends to wash out the photo. 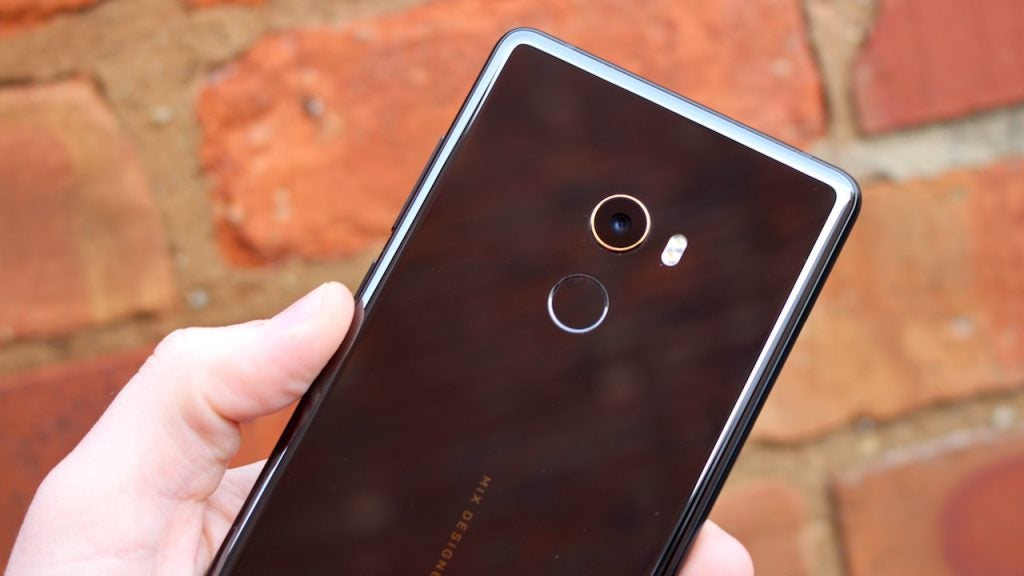 Compared to the images you can take on the iPhone 8 and Galaxy S8, the Mi Mix 2’s photos feature more aggressive compression, which results in a dramatic loss of detail when you zoom in close.

It’s also puzzling as to why Xiaomi decided against packing a dual-camera setup on this phone, despite using two cameras on its Mi6 handset – a second, wide-angle sensor would have been welcome. 4K video recording is possible at 30 frames a second, but audio recording is somewhat poor.

With that massive screen filling the display on the front, Xiaomi has had to get creative when it comes to the placement of the front-facing selfie camera. The camera is located in the bottom-right of the phone’s front, which means you have to turn the handset around to take a traditional selfie shot. Thankfully, the UI prompts you to do this whenever you switch to the front sensor. It’s a mild annoyance, but not one that will keep anyone awake at night.

The battery inside the Mi Mix 2 is rated at 3400mAh, which is a drop from the gigantic 4400mAh power cell contained inside its predecessor. Shrinking the phone down left Xiaomi little choice, and the good news is that even with the reduction in capacity the Mi Mix 2 has some serious staying power.

I was able to comfortably get an entire day of fairly heavy usage on a single charge. If I was a little more modest with my demands, it managed to get through half of the following day, too. Since it sports Qualcomm’s Quick Charge 3.0, the phone can go from practically nothing to 85% battery in just over an hour. There’s no wireless charging, however. 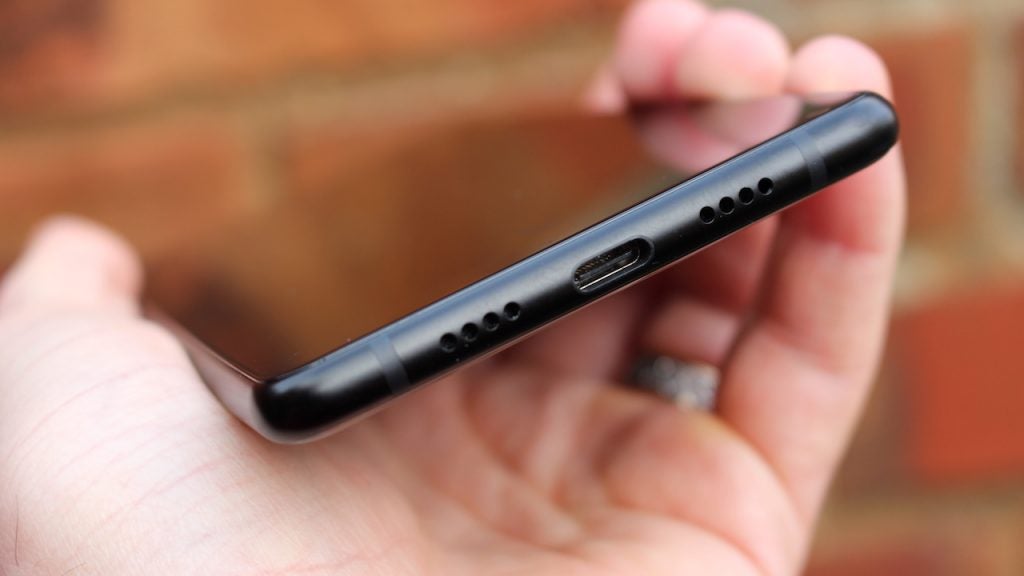 The base model of the Mi Mix 2 has 64GB of storage, but 128GB and 256GB editions are also available. Choosing the right storage amount is important – sadly, the Mi Mix 2 doesn’t support microSD cards, which is unusual for a Chinese device.

Why buy the Xiaomi Mi Mix 2?

From a design perspective, the Mi Mix 2 is a stunning smartphone. Xiaomi has been producing jaw-dropping devices for the past few years now, but this could possibly be the company’s most attractive offering yet. It looks and feels great, with the ceramic back and the gold-plated camera giving it a real touch of class.

On the downside, the lack of water and dust protection is disappointing – especially since pretty much every flagship phone has it now – and the camera performance is rather underwhelming in low light.

I’d also say that unless you’re willing to tinker with the phone’s software to install the global version of MIUI, you’ll have to put up with a China-focused user experience – which is often a little puzzling and disorientating.

These niggles aside, the Mi Mix 2 offers absolutely incredible value for money at under £450 – less than half the price of the £1000 iPhone X.

In practically every regard the Mi Mix 2 is a flagship handset that can stand proud with the best the smartphone world has to offer.

Thanks to Gearbest for supplying the unit used in this review.