What is the Wooting One?

The Wooting One is an incredibly unique take on the idea of a gaming keyboard and, quite possibly, the most innovative board to have graced the field in many years. What you’ll get with the Wooting One is a mechanical keyboard that impresses in a variety of ways – most interestingly with the keys itself.

A keyboard designed with gaming in mind, the Wooting One aims to give players a new level of control over their in-game movements by allowing them the option of gentle key presses as well as harder ones. This is accomplished by the very build of the board itself, which uses entirely analogue based mechanical switches, something of a first for gaming keyboards. While the vast majority of keyboards, mechanical or otherwise, operate in a binary state and offer only on/off activation, the analogue switches of this board were designed from the ground up to allow for more effective gaming.

This core concept helped Wooting – a company comprised of three friends from the Netherlands – raise almost €136,000 via Kickstarter campaign in order to bring the Wooting One to life. No small feat in the world of gaming keyboards. 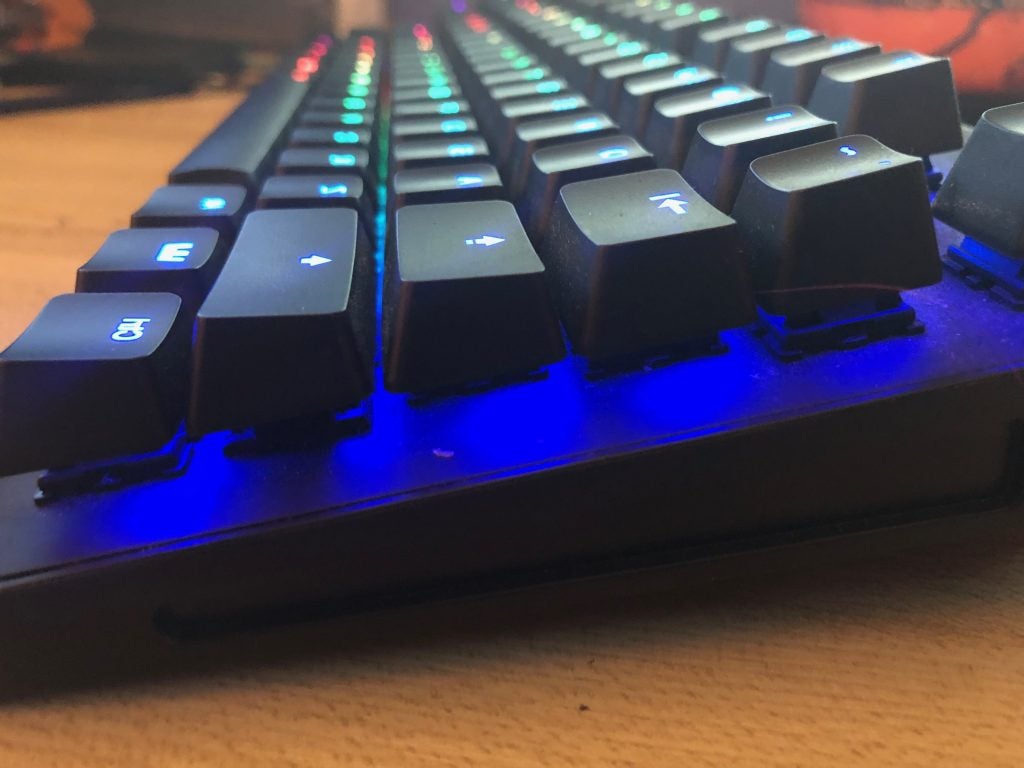 Wooting One – Design and build

The One features a minimalist look – with the exception of the Wooting logo on the frame –  and forgoes many of the flashier features and accessories (such as mouse bungees) of other gaming-focused keyboards and is currently only available in one form with no variants planned. Instead, Wooting’s focus here is on delivering a well-built and extremely satisfying keyboard that you can tune to your own needs.

The keycaps themselves echo the high quality of the rest of the Wooting One’s build – the floating key design is complemented by precision-cut, solid keys that never feel awkward or heavy. You’ll get satisfying feedback with every key press, with a varying level of ‘click’ volume depending on whether you’ve opted for the Blue or Red switches.

In my own opinion, while the Blue switches are definitely louder, they are all the more satisfying for it – though, this is most likely going to come down to personal preference as well as where you plan on using your keyboard. In terms of typing experiences, I’ve found the Wooting One hard to beat, offering fast typers a momentum that is often trickier with gaming boards.

That satisfaction and feedback continue into the Wooting One’s analogue modes, though for different reasons. Instead of looking for the instant satisfaction of a thousand little clicks and clacks, the analogue modes allow users to experiment within their games more and offers a level of control that is hard to rival. Stealth games will instantly become all the more viable and enjoyable if you’re someone who favours mouse and keyboard over a gamepad. 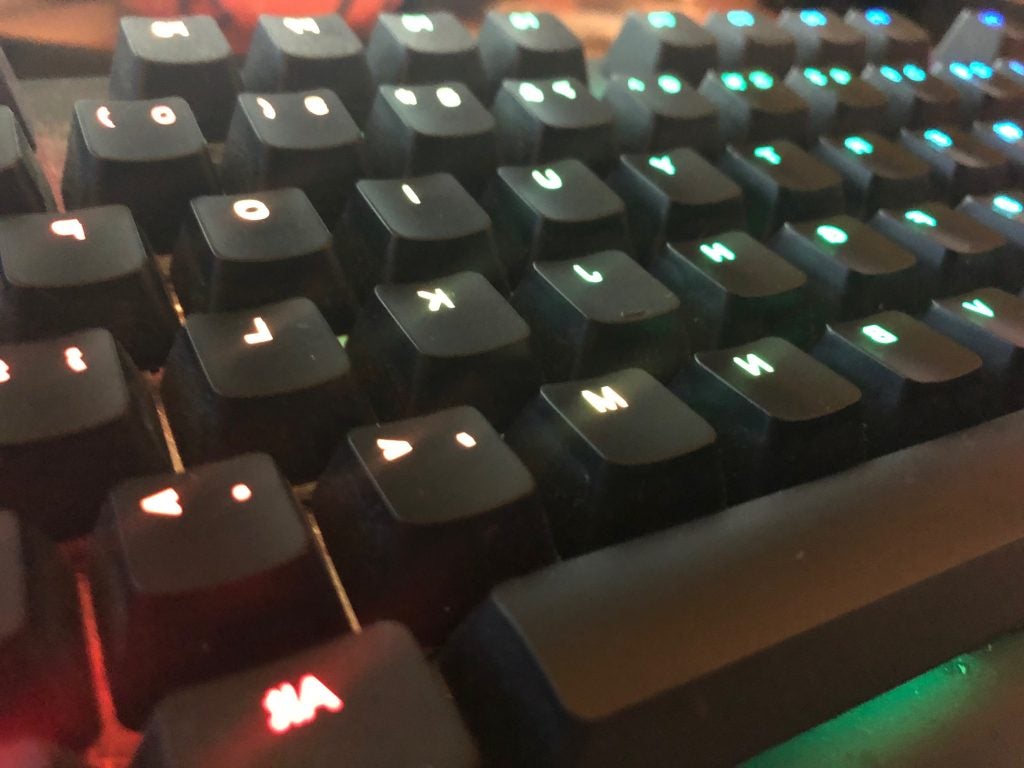 From testing, the Wooting One’s analogue keys work extremely well in games such as Fortnite, PUBG, and Hitman, where player’s footsteps can give away their position to others. It takes a significant amount of time to get used to but once you are, you can end up seeing some very big results.

Pressure-sensitive keys also allow for a very different experience when playing racing games – it’s the first time when using a keyboard, I’ve been able to finesse my way around a corner with subtle movements that were previously unavailable to me and would normally require users to play with a racing wheel or gamepad.

Of course, odds are good that you won’t be using the Wooting One for gaming 24/7 and, fortunately, the company considered this and built the board with a series of on-board profiles to switch between, all of which are fully customisable using the accompanying proprietary software. After some setup, a single key press can change the Wooting One from its unique analogue version into a more traditional mechanical keyboard with on/off binary key actuation.

As a purely digital keyboard used only for typing, the Wooting One easily became one of my favourites – it is a solidly built board that is definitely on the louder side of mechanical keyboards. The keys use Flaretech optical switches, available in both Red and Blue variants, and are a genuine joy to write with. 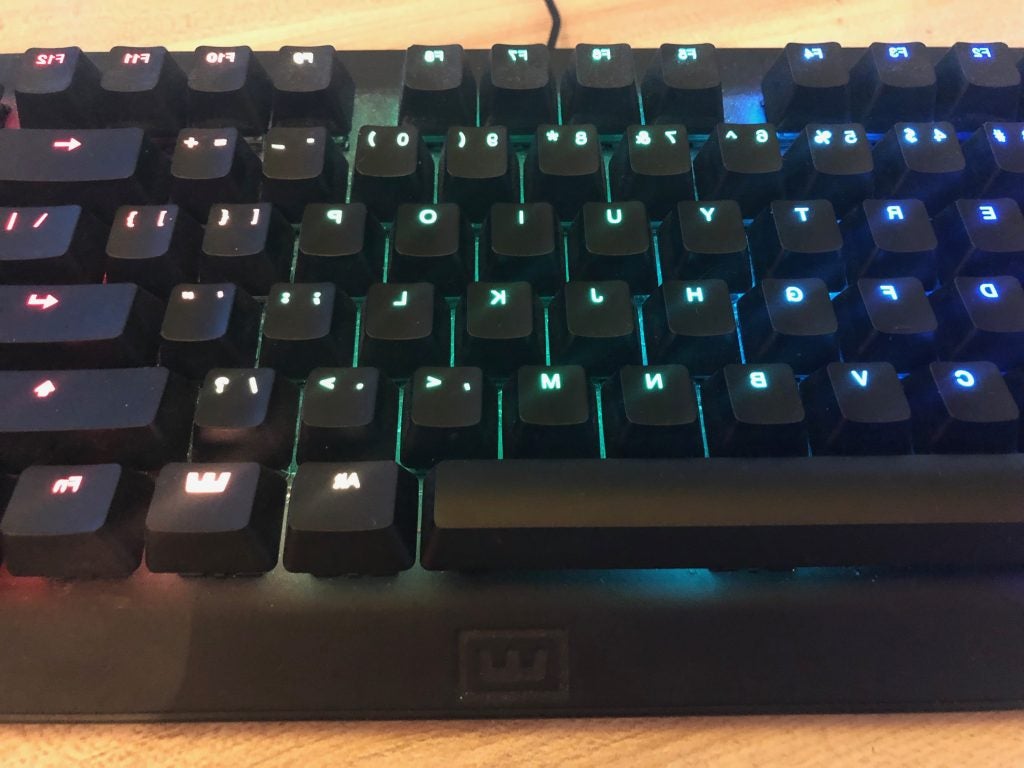 Wooting One – Software and lighting

The included proprietary software – dubbed Wootility – allows users to fine-tune different profiles while still maintaining the analogue keys, too. Practically everything about the keyboard is customisable here, from the sensitivity and activation point of the keys themselves to the full board’s worth of RGB lighting.

The software is simple to use, though, in order to get the best results from game-to-game, you’ll most likely find yourself tweaking each of the options for a while before finding something you are absolutely satisfied with. This can seem daunting and tricky at first but is ultimately rewarding when you finally find the settings that work best for you. With this level of adjustability, you can have a wide array of experiences while using the Wooting One.

The under-key RGB lighting feels like a required inclusion for any gaming keyboard in the modern era but works to a striking degree with the Wooting One. By default, you’ll be greeted by a rainbow design that spans the entire board and looks fantastic, but every single key can be customised to your heart’s content using the Wootility software. As a Wooting One owner, you’ll also gain access to Wooting’s Developer Portal, which offers access to a continuing stream of updates and information about the board and future firmware updates.

Why buy the Wooting One?

What Wooting has done with the One keyboard is something genuinely innovative and special. It’s been a joy to use while gaming and while typing, it looks great, it’s responsive and satisfying to use. It’s not the cheapest of boards out there – commonly retailing for £120 / $140 – but if you’re a devout gamer looking for a keyboard that can play to your strengths while also functioning as a very high-quality mechanical keyboard for pure typing, it’s an investment that I’d deem worthwhile.

If I had to find a fault with the One, it would be the fact that it’s currently only available in its original, tenkeyless form. As a gaming keyboard, this makes sense but there are many folks out there – myself included – that still find it hard to let go of the right-side number pad. Thankfully, after the success of the Wooting One, the company has announced its plans for the Wooting Two – a full-size variant of the original board that comes with a handful of updates and changes, as well as that aforementioned number pad.

The Wooting One is a truly special mechanical gaming keyboard that offers an exclusive gaming experience with its analogue keys and packs in a whole lot of customisation, along with its high-quality build and sleek look. The upcoming Wooting Two will have all these features as well as adding a number pad if that’s more your style.