We have to hand it to Western Digital for doing something different in what has become an increasingly stagnant – not to mention crowded – Ethernet-over-power market. While we’ve seen powerline Ethernet adaptors (network devices that use your house’s existing power cables) with built-in switches before, we’ve never seen one with so many ports as the Western Digital WD Livewire – four on each of the adaptors, to be precise. Okay, so cramming four Ethernet ports on each end of the powerline section of the network isn’t exactly a Nobel Prize-worthy innovation, but it’s an innovation none the less.

What’s more, despite the extra functionality that those eight Ethernet ports add, the WD Livewire isn’t particularly expensive. In fact, at a little over £70, it’s significantly cheaper than the Netgear XAVB1004 kit, which only has a single four-way Ethernet adaptor.


We particularly like the design of the WD Livewire adaptors. Rather than plugging directly into a socket, the adaptors are powered over two standard figure of eight cables. As such, and unlike many so many single-port adaptors, the WD Livewire doesn’t encroach into the space of adjacent sockets. We found it curious that the adapters have their own power switches, seeing as it’s as easy to just turn off the wall socket. Moreover, the switches are pretty fiddly to use, but as you don’t actually have to do so, we can’t complain too much. 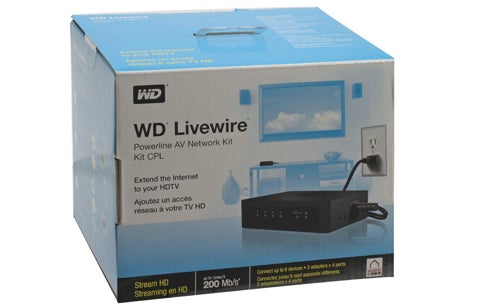 Otherwise, the design is entirely unremarkable, in a way only matt black plastic can be. We’d be more annoyed that the ‘sync’ button gives next to no indication whether it’s been pressed or not, were it not that it will only be used once. Once synced, data transferred between adaptors is 128-bit encrypted, so you can remain confident that no-one is snooping, if you’re the paranoid type that really does believe MI6 is desperately interested in your holiday snaps.

The extra ports will prove rather useful in a number of situations. We think most homes are likely to have a number of AV appliances which want a network connection as well as a number of computing systems needing the same. We’d also hazard a guess that these devices aren’t likely to be in the same room, but that fast, reliable network connections between them are desirable.

In our test set-up, for example, we had a TV, an Xbox 360, and a PS3 in the living room, connected (via the WD Livewire) to a desktop PC, a NAS, a laptop, and our ADSL modem in a bedroom. Previously we had to use a four-way Ethernet switch in each of these locations, but the WD Livewire kit meant we could remove those devices, and their cable clutter, which is a benefit not to be sniffed at.


Transfer speeds are dependant on a number of uncontrollable factors such as the quality and length of your houses cabling, but we saw transfer speeds of 62.3Mbit/s with the WD Livewire plugged into two adjacent sockets, dropping to a still respectable 52.7Mbit/s with the two adaptors on two separate ring mains, separated by a breaker box. A far cry from the “up to 200Mbit/s” claimed figures of the WD Livewire adaptors, but we’re long since used to this being the case. 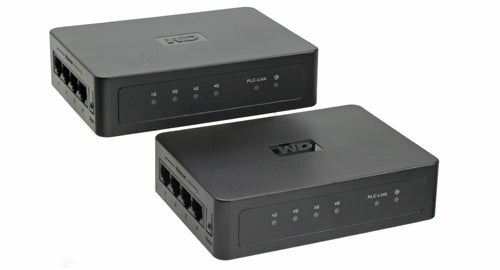 However, it is worth considering that adaptors such as the D-Link DHP-307AV offer faster speeds (78Mbit/s in our testing), and don’t encourage sharing that connection with so many devices as the WD Livewire. Nonetheless, in real world terms we believe the WD Livewire is ‘fast enough’ and the practical benefits of the numerous Ethernet ports outweigh the potential deficits – especially considering the fairly keen pricing.


Although the number of homes that really need two four-way Ethernet adaptors at each end of their powerline network is going to be limited, we can’t fault Western Digital for offering the option. That’s especially true given that the WD Livewire kit is cheaper than adaptors offering fewer ports, while offering comparable transfer speeds.