What is VLC for Windows 8?

With a wealth of features, settings and playable file types VLC has been the go-to video player for geeks for more than a decade. It’s free, never has ads and never asks you to upgrade. It’s been a long labour of love for no profit, other than knowing that a job has been done well.

VLC has now launched on the Windows Store as an app called VLC for Windows 8. Is it worth the download or should you persevere with Xbox Video?

One thing VLC has always been great at is supporting a multitude of file types from MP4 to AVIs and everything in between. In this respect VLC for Windows 8 doesn’t disappoint at all. It managed to play every file we tried including MKV, OGG, AVI, MP4, MP3, 3GP, MOV, DivX, OGV, FLV and a few other even more obscure ones.

If you really need a Windows app media player that plays pretty much anything you throw at it then the VLC is for you. Unfortunately, in almost every other respect VLC for Windows 8 is found lacking. 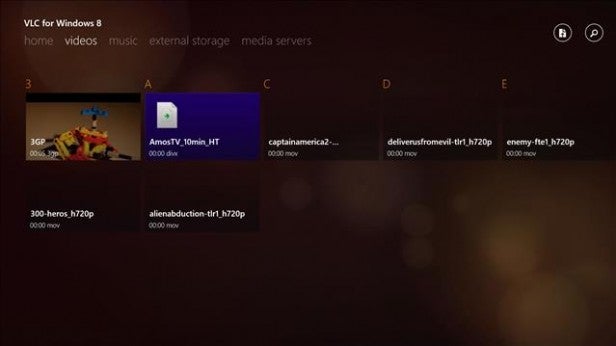 VLC’s interface is clean and suited to touch

We don’t want to knock it too much as this is still a Beta and is totally free (no in-app purchases or upgrades) but it comes with a host of issues. First thing to note is that if you have full Windows 8, and not Windows RT, you should just install the desktop version of VLC. Don’t even bother with the VLC app.

VLC for Windows 8 is aimed squarely at Windows RT users but it doesn’t yet work on on an ARM Windows RT tablet, like the Surface 2 only on x86 full Windows 8. You’ll have to wait until VLC updates the app with ARM support.

Install VLC on a compatible tablet or hybrid, though, and you’ll find a clean and clear interface with separate sections for video, music, external media and media servers. As soon as you open VLC it searches your Music and Videos folders on your device and adds them to your VLC library. So far so good.

Unfortunately, if you have your on-board media in any folder outside the standard Windows 8 created video folder you won’t be able to add it to your library. You can’t select a different path although you can open a single video directly by using the “Open video” function, although that’s not ideal. 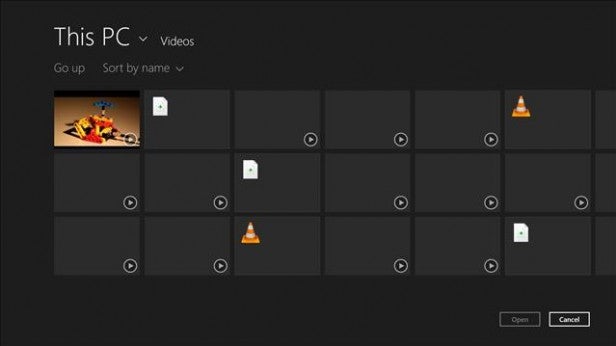 The lack of thumbs on certain file-types looks rubbish

Videos and music are categorised alphabetically and while VLC for Windows 8 automatically creates thumbs from certain video types like AVI, it does not for MKV or FLV meaning you get a blank box. It looks messy and nothing like you might be used to from the likes of XBMC.

Tap on a video and it starts to play in full screen. Options are minimal. You have the option to move forward or back by 10 seconds and scroll through the video and… well actually that’s pretty much it other than selecting an audio channel or subtitles. You can’t change volume, brightness, aspect ratio, audio settings or the myriad options full-fat VLC lets you tinker with. In fact, we couldn’t even get subs to work, something that normal VLC does automatically. 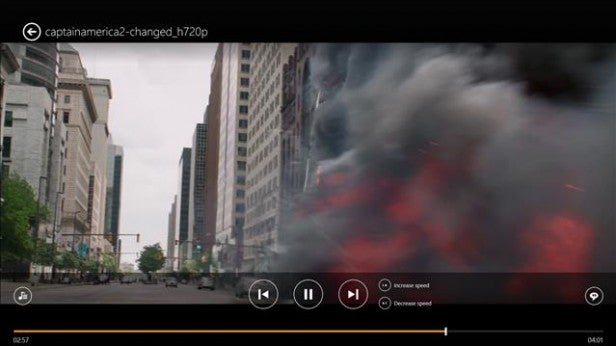 Options and settings in video are minimal to say the least

Playlists are another major feature that’s lacking. Quite why you’d want to use VLC’s basic music player when you can only play one song at a time is a little beyond us.

Perhaps worse of all, however, are the constant crashes. We experienced app restarts while fast forwarding, searching for a video, closing a video, selecting a video – pretty much anything we tried to do outside of just playing a single video and letting it finish resulted in an app restart. There’s no consistency to the crashes, sometimes an action would work fine but then the next time it would freeze the app.

It would be unfair for us to score VLC for Windows 8 in its current form, although we would have if it was a paid for app. This is clearly a very early version and we’re unsure as to why it has been released in this state.

For those who desperately require an app video player for their MKV library on a Windows RT device it will just about do the job in its current form, but you still need for the version that works with RT to appear. All others should either use the excellent full version of VLC or stick with Windows’ own video app.

We’ll be scoring VLC for Windows 8 when it comes out of Beta.