What is the Vivitek Qumi Q7?

The £722 Qumi Q7 is an ultra-portable (though not quite pocket sized) LED projector boasting 30,000 hours of lamp life, 3D playback, a built-in MS Office and Adobe PDF document viewer, 4GB of internal memory, and even optional Wi-Fi for streaming video, photos and websites.

Despite residing in the ‘Pocket and Personal’ part of Vivitek’s website and following on from the reasonably pocket-sized Qumi Q2, the Qumi Q7’s 238(d) x 180(d)mm proportions certainly didn’t fit into the pockets of any of our clothes or jackets. And at 1.4kg it’s nearly three times as heavy as the Q2, too.

Still, while it might be a challenge for a pocket the Q7 makes minimal impact in a briefcase or laptop bag. Or you can avail yourself of the Q7’s own carry bag, provided free with the projector. 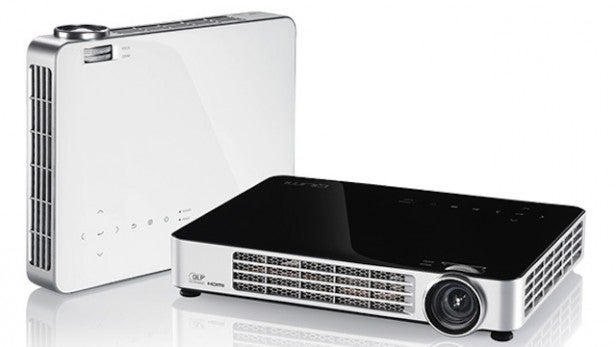 While not as tiny as some might like it to be, though, the Q7 is certainly a looker. Available in black or white, its top edge is finished in a seriously glossy, high-quality material that almost feels like lacquer, and the build quality is strong. The top panel also benefits from a slick and reasonably responsive set of touch controls (though using these does leave some pretty obvious fingerprints on that glossy top plate), and a groove above the lens that provides access to small but tactile zoom and focus rings.

Not that you have to use the buttons on the top panel, mind you. For Vivitek has also thoughtfully provided a little credit card-sized remote control with the Q7 that covers all the key functions. This is rather easy to lose in a darkened room, it must be said, and it isn’t backlit either. But you can’t really complain as getting any remote at all with a projector like the Q7 is not a given.

Connectivity is always a key issue with convenience-focussed projectors like the Q7. Especially when they’re apparently keen to deliver real crossover appeal between the home entertainment and business presentations markets.

The Q7 does a fair job in this respect, though. Particularly welcome is the presence of two HDMIs – especially as one of these can handle the MHL high resolution smartphone connection protocol. But there’s also a D-Sub PC port, a composite video port, a stereo audio input, and a USB you can use for either playing back files stored on USB storage devices or, impressively, for adding an optional extra USB Wi-Fi dongle that enables you to stream content from networked PCs.

The stereo audio input is there, of course, because the Q7 is equipped with an audio system: stereo speakers rated at 2W apiece. This doesn’t exactly represent a home cinema level of audio power, but it will hopefully be enough to provide a simple convenience audio solution of the sort many users of the ultra-portable Q7 will need given that they won’t always be readily able to find an external audio solution.

As with most ultra-portable projectors, the Q7 uses an LED-based DLP projection engine, which is handy since as well as allowing projectors to be incredibly small, LED lamps deliver a vast lifespan of up to 30,000 hours. This compares extremely well with the 2000-4000 hours you get with normal projection lamps.

The image specs delivered by the LED projector system look impressive too, with highlights of 800 Lumens and a claimed contrast ratio of 30,000:1 particularly catching the eye. The native resolution of 1280×800 isn’t full HD and delivers a PC-favouring 16:10 native aspect ratio versus the 16:9 preferred by video sources, but getting any sort of widescreen HD support is fair enough on a projector like the Q7.

The Q7 also supports 3D playback, using the DLP Link system. You don’t get any of the necessary active shutter glasses included for free, though the 3D transmitter is built into the projector’s body.

The Q7 is engagingly straightforward to set up by ultra portable projection standards. It doesn’t support vertical or horizontal image shifting, but its natural projection angle seems well considered for most home and office scenarios. 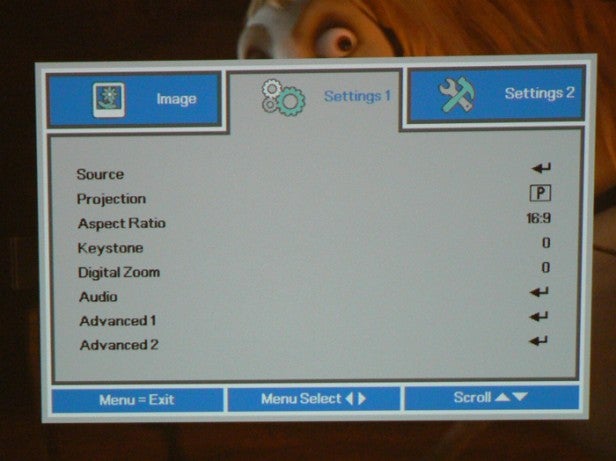 The simple zoom and focus rings work tidily and smoothly, and while the amount of zoom available isn’t especially massive at 1.1x, having any zoom at all on an ultra-portable projector could reasonably be considered a bonus.

With no vertical image shifting it’s handy that there’s a good amount of keystone adjustment to help you get the sides of your picture straight, as well as an auto keystone option if you can’t be bothered to sort this problem out yourself.

The onscreen menus are bland but straightforward too, and while picture setup tools aren’t especially comprehensive, again we wouldn’t really expect much else from a projector like the Q7.

In trying to optimize pictures, there are just a couple of things to bear in mind. First, for PC presentations, 3D playback and use of the projector in a room with ambient light in it, make sure the lamp output option is set to normal. For movie viewing in a reasonably dark room, turn the lamp to Eco, as this reduces the projector’s running noise and boost black levels.

The other key setting when switching between PC and video use is gamma; use the 2.4 setting for PCs, and the 2.2 setting for video.