At first we couldn’t get 3D to work with the Q7, as inexplicably the projector doesn’t automatically switch itself into 3D playback mode when it detects a 3D source input. Once we’d manually selected the DLP Link option and donned a pair of Vivitek’s optional chunky but comfortable active shutter glasses, though, we were ready to go.

Except that we weren’t quite, as it turned out that the projector also hadn’t switched automatically from its Eco to Normal lamp mode for 3D playback, leaving pictures looking very dull. So we had to sort that out manually too.

Right, NOW we’re ready. Ready for what’s initially one of the most uncomfortable, unpleasant and just fragged up 3D pictures we’ve ever seen. 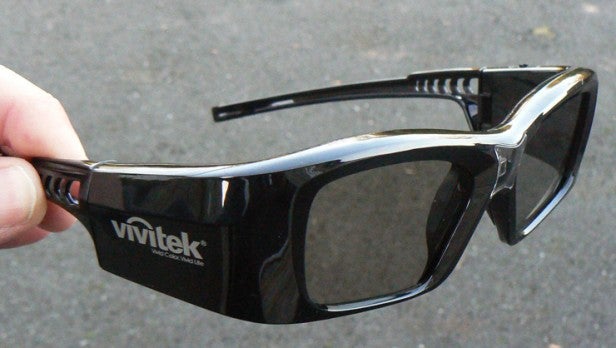 The sense of depth in the image is all over the place, with background objects popping up to the front, foreground objects appearing like they’ve been pushed to the back, and everything being affected by a weird shimmery insubstantiality. Urgh.

Fortunately, though, we found a fix for this migraine-inducing 3D horror show in the shape of the projector’s 3D Inverter option. As soon as we set this to on the correct sense of depth was delivered, and the cellophaney look to 3D images evaporated. Phew.

We have no idea why we needed to use the Inversion option; similar setting options are available on all 3D products, but we’ve never had to use them before. And it’s scary to think how many people will not realise that such a ‘fix’ for their 3D nightmares with the Q7 is there.

Still, with this final initial hiccup solved, there are some good things to report about the Q7’s 3D pictures. For starters they’re almost completely free of crosstalk ghosting noise. And you don’t feel the flicker from the active shutter system unless you’ve made the mistake of trying to watch the Q7 in an excessively bright room.

Motion is reasonably well handled for a projector at the Q7’s level of the market too, with relatively little of the judder that can afflict 3D images on some projectors costing way more.

Even with the lamp on its highest setting, though, 3D pictures lack brightness if you’re trying to run them at any sort of size. They also lack contrast, as becomes instantly apparent during dark 3D scenes as the picture succumbs to a pervasive grey wash. 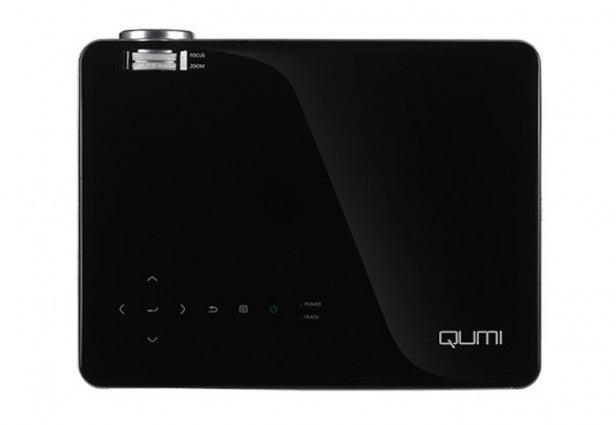 This issue also makes dark 3D scenes look pretty much devoid of depth, and actually the general lack of contrast in the image means the Q7’s sense of 3D depth is continually a little limited.

Discussing the audio quality of a projector is always likely to put you on a hiding to nothing. And it’s fair to say the Q7 doesn’t really buck the projector sound trend, as the audio produced by its speakers sounds thin, small and devoid of bass. Also, of course, it’s quite clearly coming from a projector sat some distance from the screen rather than from anywhere near the action it’s supposed to accompany.

The Q7 can at least go reasonably loud without distorting, though, so it gets the job done on a purely practical level for people with no easy external audio solution to hand.

One advantage of the Q7 being slightly larger than some of the ultra-portable models around is that it has more room for dissipating heat and the noise from its cooling fans. As a result even with its lamp running in Normal mode it’s a reasonably quiet runner, and in eco mode it’s probably the quietest ultra-portable projector we’ve heard. Or not heard, as the case may be.

The Q7 has potential appeal as a projector to go with a gaming PC or console. So it’s very pleasing indeed to find it measuring just 6ms of input lag. This is actually the lowest figure we’ve ever measured on a video display, undercutting even Sony’s W905A TVs.

Should I buy a Vivitek Qumi Q7?

The Q7 is well featured by ultra portable projection standards, and tries harder than most to cater for both the business and home user. It’s cutely but also robustly designed too, so long as you don’t mind the fact that it’s not small enough to fit in a pocket like some of its peers, such as the brilliant 3M MP410.

While it works quite well as both a PC and video projector, though, there’s a sense that it doesn’t quite nail either performance approach in the way a more single-minded projector might.

It’s pretty hard, too, to ignore the fact that the Q7 looks pretty expensive compared with similar products such as the BenQ GP10 – a projector that can now be had for under £400 in some corners of the internet.

There’s nothing bad about the Q7. It looks great, it’s got some impressive convenience features including built-in storage, and it works hard to cater for both business and pleasure scenarios. However, there’s a feeling with its performance that in trying to be a jack of all trades it’s ended up being the master of none, and its price looks at least £100 too high.