What is the ViewSonic XG3240C?

The ViewSonic XG3240C is a 32-inch gaming monitor that boasts HDR10 support, a 144Hz refresh rate and plenty of little extras all for a very reasonable price.

Its claimed HDR10 support comes via its use of a Vertical Alignment (VA) LCD panel, which has an inherently high contrast ratio of 3000:1, and a wide colour gamut backlight. These combined allow the display to get close to the greater contrast and range of colours that is the hall mark of HDR.

However, despite being a large 32-inch display, you’re only getting a native resolution of 2560 x 1440 pixels so this may not be the big-screen upgrade for all.

Given the size of the ViewSonic XG3240C’s screen, its not as physically imposing as you might think. That’s in large part because the bezel round the top and sides of the screen are of the very narrow, low-profile type.

The stand is also not overly large and although the screen is curved it’s not a particularly aggressive curve, so the display isn’t too deep either. All told, you could more than likely swap out an old 27-inch display and hardly need make any extra room for this display. 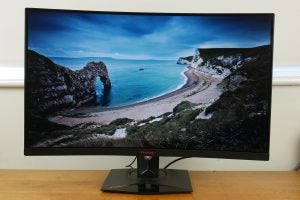 In terms of styling, the narrow bezel again helps out, giving the majority of the front of the display a light and modern feel. The stand and rear of the ViewSonic XG3240C feature a few areas of glossy black plastic, which I feel immediately cheapens the look of the whole thing, but thankfully they’re not too prominent.

Likewise, the rather humdrum red, painted-on ViewSonic logos on the front bezel and rear of the display aren’t exactly prize-winning design elements but neither are they overly distracting.

In terms of features, this display isn’t left wanting for much at all. The included stand offers a full array of adjustability, so you can alter the height as well as tilt, pivot and rotate the display. Or you can easily remove the stand and attach an alternative one, thanks to the 100x100mm VESA mounting points.

Round the back you also get plenty of connectivity, with one DisplayPort and two HDMI available for video input as well as headphone and microphone jacks. There’s also a USB hub with two USB 3.0 ports on the back and two conveniently located on the left edge. 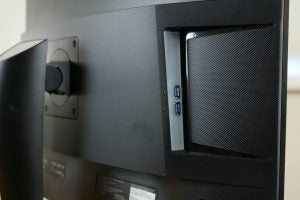 I also welcome the idea of adding a pop out headphone stand but its placement on the back of the stand makes it rather awkward to reach in normal use.

As for the display itself, the key thing to note is that it only features a resolution of 2560 x 1440 pixels. That’s the same as you’ll find on most 27-inch displays, making this less of an upgrade for anyone that owns one of those.

This also results in a less sharp, more pixelated image. A typical 27-inch display with a 2560 x 1440 resolution will have 110ppi (pixels per inch) whereas this display has 94ppi. That’s not as bad as the 80ppi of something like the Samsung CHG90 but it’s still not great.

As such, the XG3240C will be a display for those that either prefer to have their display sat a bit further back or that just prefer everything to look a little larger. 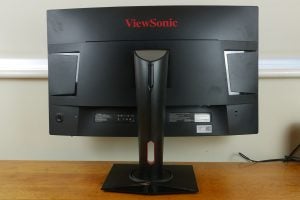 Meanwhile, when it comes to the quality of image you’re getting, the ViewSonic XG3240C brings an intriguing set of features to the table. It uses a VA-type LCD panel, which has a native contrast ratio of 2500:1. In comparison, most TN or IPS-type LCD panels only have a contrast ratio of 1000:1. This makes them appear slightly less deep and dynamic.

This also pushes this display closer to providing a true HDR experience. Standard definition content is mastered for use with 1000:1 contrast displays while HDR10 aims for 10,000:1. So, 2500:1 is clearly still some way off that figure but it’s a step in the right direction.

This LCD panel works in conjunction with a wide-gamut backlight that allows the display to reproduce a greater range of colours than standard displays. In fact, the ViewSonic XG3240C can produce 90% of the DCI-P3 colour space used in the HDR10 standard, so this display can truly represent the wider colour gamut of HDR content.

A key oddity, though, is that the display can’t be put into a standard colour gamut mode so that it can represent non-HDR content properly.

The ViewSonic XG3240C is easy to set up physically, with the box conveniently opening all the way out and folding flat, making it a cinch to get to the polystyrene packaging inside.

Once opened up, the screen just needs the base of the stand attaching via a single screw that can be tightened by hand. You get cables for DisplayPort, USB 3.0 and power included in the box. The ample adjustability of the stand also means it’s easy to plug in the cables and position the display just as you like. 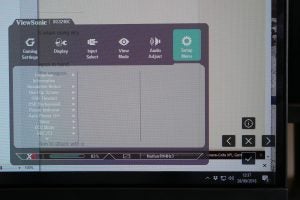 As for setting up the display’s image, you’ll have to jump into the onscreen display menu, which is controlled via a single mini joystick on the back of the display. Push it up and it shows a number of quick setting options or tap it in and it brings up the full menu.

The quick settings include various modes supposedly optimised for gaming genres such as FPS, MOBA and RTS. You can also select one of three custom modes.

Meanwhile, jumping into the main menu will get you a host of options split up into Gaming Settings, Display, Input Select, View Mode, Audio Adjust, and Setup Menu.

Dive deeper into these and you can adjust nearly all the key settings you’d expect for a gaming monitor. You can turn FreeSync on and off, adjust colour temperature, brightness, contrast and gamma and, of course, turn on HDR10 support. 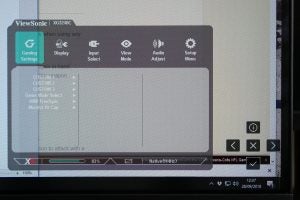 It’s all pretty standard stuff, except for two key factors. The first is that the navigation system is thoroughly unintuitive. Rather than just up, down, left and right the mini joystick instead corresponds to Info, OK, left and right or some other variation thereon. It’s incredibly confusing.

The other issue is the lack of a direct option to switch from the wider colour gamut of this display to a normal sRGB one. For general, non-HDR, use you’d normally want the display to show a standard sRGB colour gamut. However, this display is stuck showing a greater range of colours – equivalent to 125% of the sRGB colour space. As a result, colours always look slightly over saturated.

As hinted at above, there are two particularly obvious aspects to this display’s image quality. The first is the relatively low pixel density and the other is the high colour gamut.

The former means that we found we preferred to position this display a little further back than usual to get a slightly sharper looking image. Alternatively, if you just prefer a larger, blockier view then it certainly delivers this. Crucially, up close it’s still nice and even looking, with none of the graininess you get on some poor quality displays. 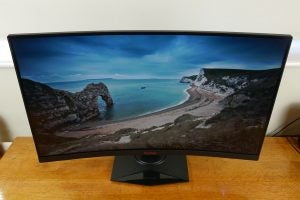 Meanwhile, when it comes to the oversaturated colours, this is largely quite subtle but every now and then colours look just a bit brighter than they really should. In particular, there can be a red blotchiness to caucasian skin that doesn’t look natural and green colour such as foliage in bright sunshine can look a little too vibrant. To be clear, this by no means ruins the overall image quality of the display but for sticklers for colour accuracy, it does knock this display down a peg or two, and means it’s not really suitable for content creation.

Elsewhere the display performs very well indeed. Overall colour balance looks good, with no obvious coloured tinge to the display. Contrast is also clearly a step up from more typical LCD monitors and viewing angles are good too, ensuring the display looks largely the same regardless of how much you move around in front of it.

Putting these subjective observations to the test, we fired up our Xrite iDisplay Pro colorimeter and DisplayCal software to test its objective performance, and it largely lived up to expectations.

A peak brightness of 246 nits isn’t the brightest we’ve seen but a very low black level of just 0.0969nits makes for an impressive contrast of 2576:1. Admittedly that’s short of the 3000:1 Viewsonic claims but it’s still a clear step up from most displays.

A colour temperature of 6490K is also so close to the ideal of 6500K as to be perfect, showing there is indeed no skewing of the colour balance here.

An impressively low Delta E score of 0.09 and high 89.5% DCI-P3 colour coverage also show this display lives up to its extended colour gamut claims – DCI-P3 is normally around 70% for non-HDR displays.

All told, this isn’t a display we’d choose for colour-critical work such as photo editing, due to that high colour gamut, but it is fine for general desktop use and gaming. For watching video, cinephiles will probably again note the slightly over-saturated colours, though the high contrast and otherwise good colour balance pull things back. 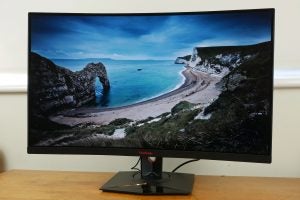 As for gaming performance, the newer type of VA LCD panel used in this display shows a marked reduction in ghosting and other issues related to the slow response time of previous VA LCD panels. It feels much closer to the snappiness of IPS and TN panels, even if it’s not quite as good still.

Meanwhile, the 144Hz refresh rate and FreeSync combo works as well as you’d expect, providing a smooth and responsive experience. We’d be happy to play competitively on this display, even if the very fastest displays around still outperform it.

Finally there’s HDR content to consider and as you might expect, this display delivers in some aspects but not others. For a start, the difference between HDR and non-HDR content is not overly clear due to both the contrast and extended colours being on all the time.

Nonetheless, in terms of the extended colour range, the display can certainly deliver this. The 2500:1 contrast is also a step up from most 1000:1 displays, but it’s still a far cry from the 10,000:1 of true HDR. All told, this is what we’d consider a “pseudo-HDR” display. It can take in and properly interpret an HDR signal and deliver something that hints at an HDR image but it’s not the real deal. For that you’ll need something like the Asus PG27UQ.

Why buy the ViewSonic XG3240C?

This is an intriguing monitor. On the one hand, it provides a really compelling combination of features, such as its large screen size, high contrast, 144Hz refresh rate, FreeSync and HDR10 support. Plus it has ample connectivity, a USB hub and fully adjustable stand.

Gaming performance is also better than we’ve come to expect from VA-type LCD monitors. Considering its price, it’s got a lot going for it.

However, the relatively low resolution for its size, slightly over-saturated colours and only pseudo-HDR means it doesn’t completely win us over. In particular, if content creation is at all a concern then we’d generally recommend a 144Hz, 27-inch IPS such as the Acer XF270HU for its more accurate colours.

A nice all-rounder of a large gaming display that provides good performance for its price.