Rather than wanting to be your day-to-day music source like Spotify, Twitter #Music is all about music discovery. It lets you check out the artists who follow your favourite bands, see the songs trending on Twitter, and listen to and purchase music tracks.

Apart from that, you can’t do much else. Without the ability to search for specific tracks or create radio stations and playlists, is it a worthwhile service? Upon opening Twitter #Music you are presented with all the music currently trending on Twitter, under a “Popular” tab. 140 square icons display 140 tracks recently mentioned on Twitter – it’s a number used to tie in with Twitter’s 140-character ethos.

You can then opt to play any specific track with a tap, or press the large play button down below to start randomly shuffling through the songs.

The well-presented interface cleverly expands the tile of a selected song, rearranging the icons for the other tracks around the selection. It’s a little like the Windows Phone 8 layout. From the selected song’s tile, you can follow the band on Twitter, play the song, or see which artists they’re following.

Another nice touch is that the shuffle play button in the left-hand corner spins the cover art of the song currently playing. It’s a little like a spinning vinyl. And the volume level bounces up and down in the artist’s tile for an extra visual flourish.

Giving the record icon a quick tap brings up the Twitter #Music play, pause and track skipping options, as well as a volume slider along the bottom. From here you can also tweet the track to spread the word about the artists you’re currently grooving along to. The app prepares a tweet for you, complete with #nowplaying hashtag. 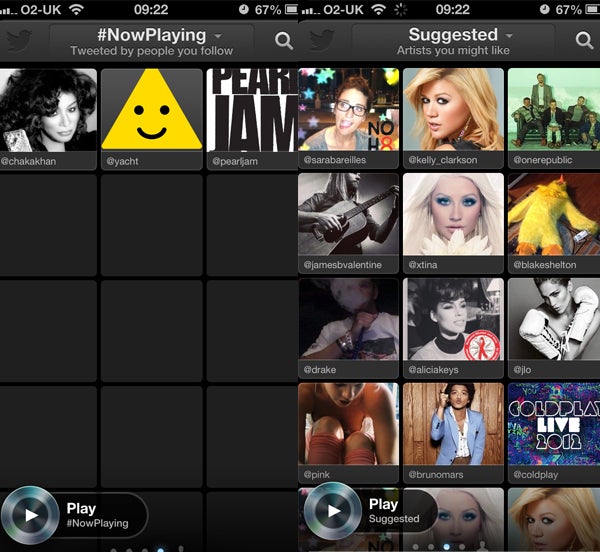 A swipe to the left on the app’s main screen reveals Twitter #Music’s “Emerging” tab. Similar to the “Popular” page, “Emerging” features 140 artists not quite yet in the mainstream spotlight. It’s out to help you discover “hidden talent found in the Tweets”, apparently.

The next tab is entitled “#NowPlaying” and displays any songs tweeted by people you know or follow on Twitter. Now, it seems to only work if they have used the #NowPlaying hashtag in their tweet, so this section is currently lacking as few people at present have fully embraced the Twitter #Music app.

Finally, the app allows you to view your own Twitter profile, but only by the artists you are currently following on the social media site. 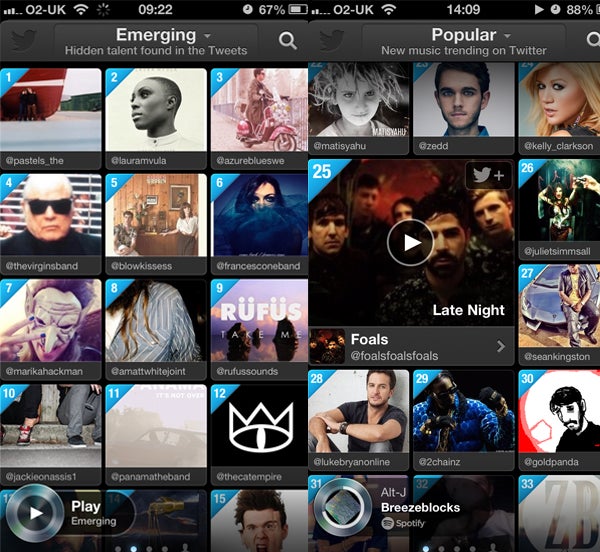 Now, while this all sounds well and good so far, the app doesn’t offer a lot more else. The search option only allows you to look for artists on Twitter, rather than the songs themselves. Plus the artists listed are only based on the people you are following on Twitter.

The biggest flaw of the service, though, is that you’ll need to pay a monthly fee for a Spotify or Rdio subscription to fully utilise the Twitter #Music service – otherwise you’re restricted to 30-second previews. However, seeing as it is merely designed to help you discover new music, the previews – powered by iTunes – may suffice.

The usefulness of Twitter #Music will depend on how dedicated you are to the social media site itself. The range of content accessible through the music service is encapsulated within your own Twitter sphere, so if you are a hardcore Twitter user it’s bound to be bursting at the seams. Casual tweeters will find the content a little lacking, and certainly not tailored to your personal music taste if you haven’t made the effort to follow your favourite musicians on Twitter beforehand.

Although Twitter #Music has a well-presented and easy to navigate user interface, don’t expect it to take over your current music service. The app is only using its full potential when coupled with a Spotify or Rdio subscription and the variety of music presented entirely depends on how active you are on Twitter. Beyond that its search functions are a little weak.