Tranquil isn’t just a name: this company is serious about silence. Where possible it will cool its PCs without the need for fans, making them near silent – as we found with the T7-HSA Home Server and T2.e we’ve looked at previously. However, while both those systems were relatively modest in their performance, the machine we’re looking at today is rather more powerful.

The mini-ITX Tranquil PC ixL is based on an Intel Core i3 processor running at close to 3GHz, while even Core i5 versions are available. With this much grunt the ixL is more than powerful enough to be used for the vast majority of everyday computing tasks. Configure this little beast with an SSD and it will not only be 100 per cent free of noisy moving parts but also a very fast and modern PC that’s just right for being turned into a Home Theatre PC (HTPC). At least that’s the theory, so let’s see how it holds up.


From the moment you take it out of its box and remove the black cloth protecting it, it’s obvious that Tranquil PC’s ixL is on a whole other level to most small chassis, such as that used by the recently reviewed DinoPC Mini Carnivore. For starters, it’s more compact than any other system this powerful that we can think of, measuring just 240 x 250 x 110mm. There are smaller PCs available, but they tend to be underpowered machines such as the Atom-based Acer Aspire Revo or the AMD-based Dell Inspiron Zino HD.

It’s not just in its dimensions that the ixL impresses either. Despite sporting a few prominent grilles and vents for heat dissipation, it still looks great thanks to its brushed black metal construction, with subtly integrated ports and a slot-loading DVD drive. In fact, it’s probably the closest we’ve seen a proper PC come to challenging the Mac Mini on the design front, though comparing the two is somewhat of an apples and oranges endeavour.


Because of the sheer amount of metal utilized in its construction, Tranquil PC’s ixL is also one of the most solid PCs we’ve come across, sharing its ‘most rugged’ title with the Linutop 2 Mini. Though we didn’t put this to the test (and wouldn’t recommend you do either), we’re fairly sure you could jump up and down on the ixL without making a dent. Obviously, this solidity also means it’s rather heavy for its diminutive size, coming in at 6kg – but don’t worry, four high-quality rubber feet mean it won’t scratch anything you put it on. The power and optical drive eject buttons also feel reassuringly solid.

As long as you can forgive its lack of USB 3.0 (not a limitation we’re keen on, but it will depend on your intended usage), connectivity is yet another strong point of the mini-ITX ixL. At its front we have two USB 2.0 ports and a card reader, next to which is a small IR receiver.

Around the back are a further six USB ports, Gigabit Ethernet, DVI and HDMI video outputs, and both analogue and optical digital audio. What makes the small ixL unique, however, is its provision of no less than three external SATA ports. Considering this is (for now) still a more common storage interface than USB 3.0 and just as fast in real life, Tranquil PC’s creation may hold high appeal for those with large amounts of data kept on external-storage.


Though you can spec up an ixL with a Core i5 CPU, 8GB of RAM and two hard drives (one 2.5in and one 3.5in), we have one of the lower-spec Core i3 systems, which is available for a more affordable £689.73. For this you get a dual-core Intel Core i3 530 running at 2.93GHz, which should be more than powerful enough to handle all your processing needs. The Core i5 option gives you a 3.2GHz 560 but, as this is still a dual-core CPU, we would be inclined to stick with the cheaper of the two.

Our review machine has only 2GB of DDR3 RAM, which is a bit low by today’s standards so we would recommend doubling it to 4GB, even though the £48 Tranquil charges for this upgrade is a little over the odds. That said, 2GB should be enough for most basic tasks and multimedia, and Tranquil uses a single stick leaving you a free memory slot to add more at a later date.


Hard drive choices are quite extensive, with the option to go for a 64GB SSD as your system drive (which will set you back a not unreasonable £109) and a regular 3.5in hard drive of up to 2TB for data. However, our spec came with a single 2.5in 500GB ‘laptop’ drive, which might not perform as well as a same-capacity desktop drive and costs £10 more but is also quieter and uses less electricity, contributing to the ixL’s impressive frugality.

At idle, Tranquil PC’s ixL consumed around 20W, while under load power usage generally stayed well below 50W. This is excellent considering the amount of power on offer and will be even lower if it’s configured with an SSD only. Meanwhile, heat dissipation by the chassis (the finned side of which is linked directly to the CPU cooling block through lengthy heatpipes) was excellent: the Core i3 530 stayed below 50 degrees yet the case never became more than pleasantly warm to the touch. What’s more, it was completely silent when not accessing the hard or optical drives. If we have any complaint, it’s that due to the absence of a power LED (the case appears to have an LED indicator but it wasn’t working) it was difficult to tell whether the ixL was turned on without turning on our monitor.

Though it has plenty of power to be an excellent media centre and for most other tasks, the ixL is not a gaming machine. The Core i3’s integrated graphics chip doesn’t offer improved performance over Intel’s previous efforts where intensive 3D is concerned, and even casual gamers should probably steer clear of Intel’s integrated graphics, as with an old and undemanding title like Call of Duty 4 you’ll be lucky to get beyond 10fps. 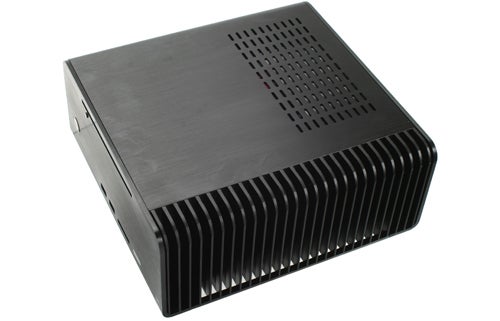 One other potentially major limitation, especially for HTPC enthusiasts, is that Tranquil PC doesn’t offer a Blu-ray option. Slot-loading slim-line Blu-ray drives might not be cheap but they are available, and we’re certain there will be consumers willing to pay the extra to get the best out of what is, after all, already a premium-priced system. You can, however, add a low-profile TV tuner and remote for £80 (analogue) or £110 (digital).


While on the topic of price, you do pay a premium for the ixL’s tank-like build quality and stealth-bomber silence but we think it’s a price worth paying. Indeed, even if you’re into building a PC yourself, we recommend you consider the barebones unit, which comes with a CPU pre-installed for £457.

However, the main problem with this system isn’t that you’re paying a premium for the build quality or even that it doesn’t have a Blu-ray option, but that it isn’t the ideal candidate for any particular purpose that we can think of. If you simply want an HTPC then the Core i3 CPU is arguably overkill and instead something like the even smaller Dell Inspiron Zino HD makes more sense, especially as it has a Blu-ray option and is far cheaper. Conversely, if you want a more powerful PC that could also do for gaming, then the lack of decent graphics options severely limits you. You could theoretically add a low profile card as found in the DinoPC Mini Carnivore, but with no air circulating round the ixL it is likely to overheat. 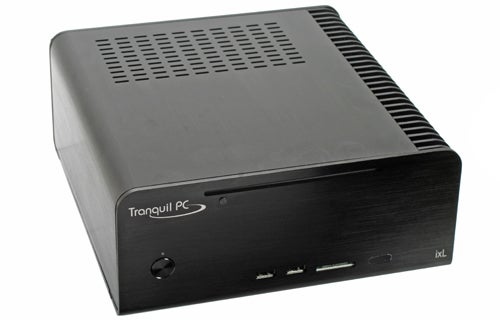 Lastly, if you just want a small and attractive general purpose PC, you can actually get a Mac Mini for the same price as this system, and although it’s not quite as powerful and is more limited in terms of upgrade potential, it is even smaller and better-looking. Obviously none of the above solutions are silent, though, so if that is your main consideration then the ixL is still well worth considering.


With Tranquil PC’s ixL you’re paying a premium price for a premium product. Barring machines based on Intel’s underpowered Atom processor, we can’t think of another PC that runs absolutely silently and offers the potential for no moving parts, all in a small and attractive chassis. Build quality is also second to none, but the ixL’s lack of a Blu-ray drive option may limit its appeal even for those who can afford it.