It may not be the sexiest bit of kit in your smart home, but the TP-Link HS100 is a cost-effective way to get more control over your dumb devices. The Kasa app has tonnes of features and can even monitor how much power each device is using, making the HS100 a source of information as well as a way to remote control your devices. If you're looking for a fully-featured smart plug at a great price, this is an excellent choice.

Smart plugs are one of the easiest upgrades you can make to your home, turning your dumb appliances into smart ones. In the UK, we’ve had quite a change, with our previous top choice, the Belkin WeMo Insight, now no longer available. If you want to monitor how much power a device is using, as well as control it remotely, the excellently-priced TP-Link HS100 Kasa Smart Wi-Fi Plug could be for you.

The TP-Link HS100 Kasa Smart Wi-Fi Plug might not be the most glamorous addition to a smart home. A simple adaptor, it plugs into a wall socket and controls the power to a single device, or a multi-way adaptor with several devices plugged in. You can turn it on and off with its discrete button, but most of the time you’ll want to use the Kasa app, installed on an Android or iOS device.

The HS100 has a single socket, above which is the grey power button. Built into the button are two indicators: one to show Wi-Fi status, and a second to indicate when the socket is live. On top, there’s a tiny reset switch, while the back panel is blank apart from the plug prongs.

Like other smart plugs, the HS100 can’t control everything. Unswitched devices or those with mechanical controls will obediently spring to life when the power comes on, but many products with electronic controls will default to standby mode. It also pays to be cautious: we wouldn’t add smart control to a heater that doesn’t have overheat or tip-over protection, for example. Similarly, it’s not a good idea to cut the mains power to a computer or projector without shutting them down properly first.

TP-Link’s Kasa devices work with any wireless network in the 2.4GHz band, which should make them compatible with any wireless router from the last couple of decades. There’s no costly starter kit to buy, but the drawback is that unlike some smart ecosystems, Kasa devices may be more subject to wireless coverage and interference problems. 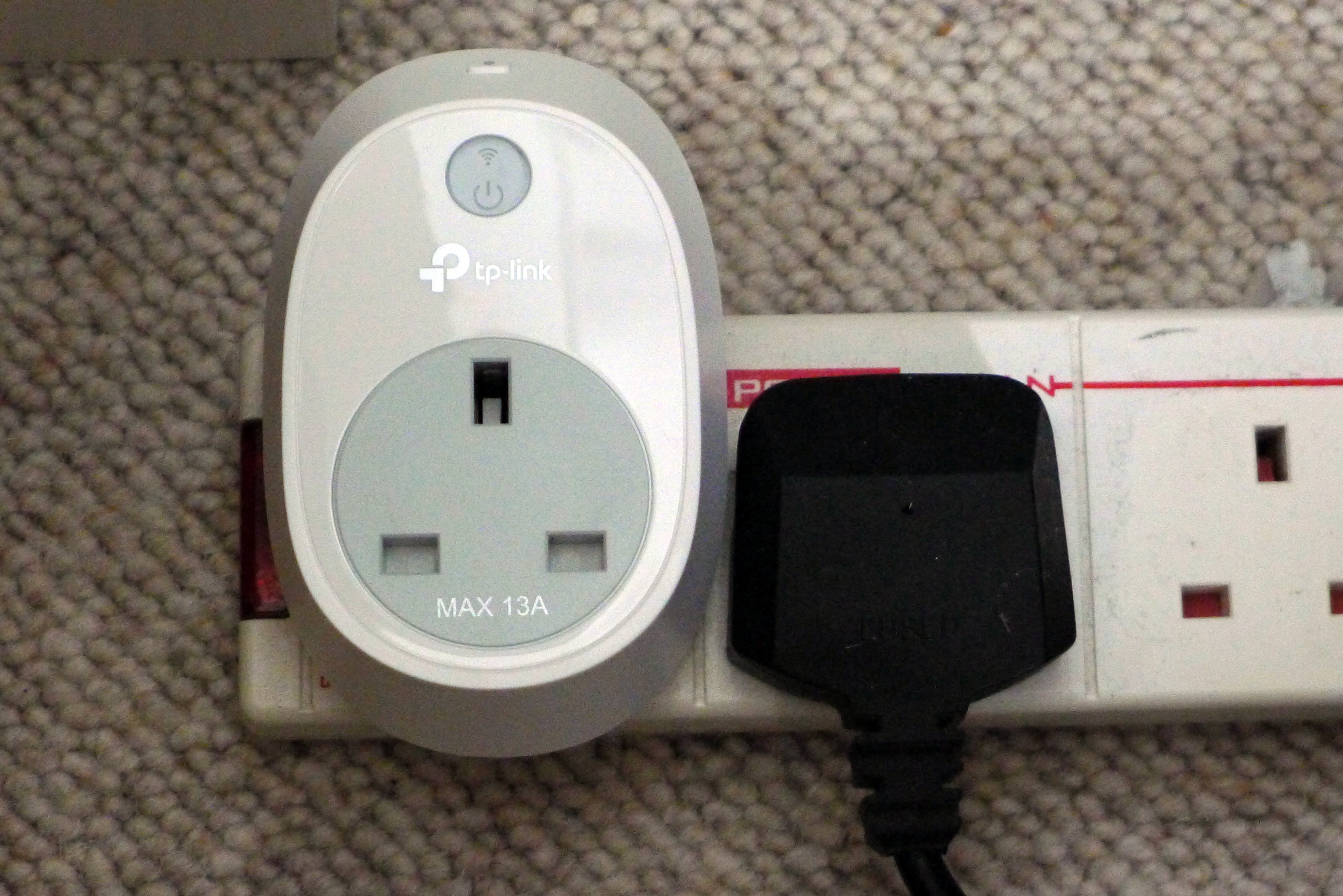 This smart plug isn’t overly large, but it does encroach over the dividing line in a gang-style adaptor. There’s enough room for a standard plug in the next socket, but not for another HS100. Viewed from the side it’s about twice as deep as the earth pin on a plug.

With a standard plug inserted the combined depth of nearly 7cm could make it harder to fit behind furniture. Unfortunately, you can’t switch off either indicator light. This could be a distraction if you plan to use the smart plug in a bedroom, although the LEDs aren’t especially bright. The plug is quite deep

These minor points aside, it couldn’t be easier to live with the HS100. Plug it in and within a few seconds it’s ready for you to link it to your local Wi-Fi network. You’ll need to install the free Kasa app, which detects the plug and lets you configure a name and custom icon to help you remember what it’s connected to. While the plug itself only supports 2.4GHz networks, the app had no problem finding it over our phone’s 5GHz connection to a dual-band router.

TP-Link’s Kasa app is straightforward and pleasant to use. The devices you add are displayed on the Devices tab, grouped by their function: smart lighting, smart plugs and so on. You can tap the power icon from here to turn devices on and off, or tap the device icon to enter a more detailed control page. 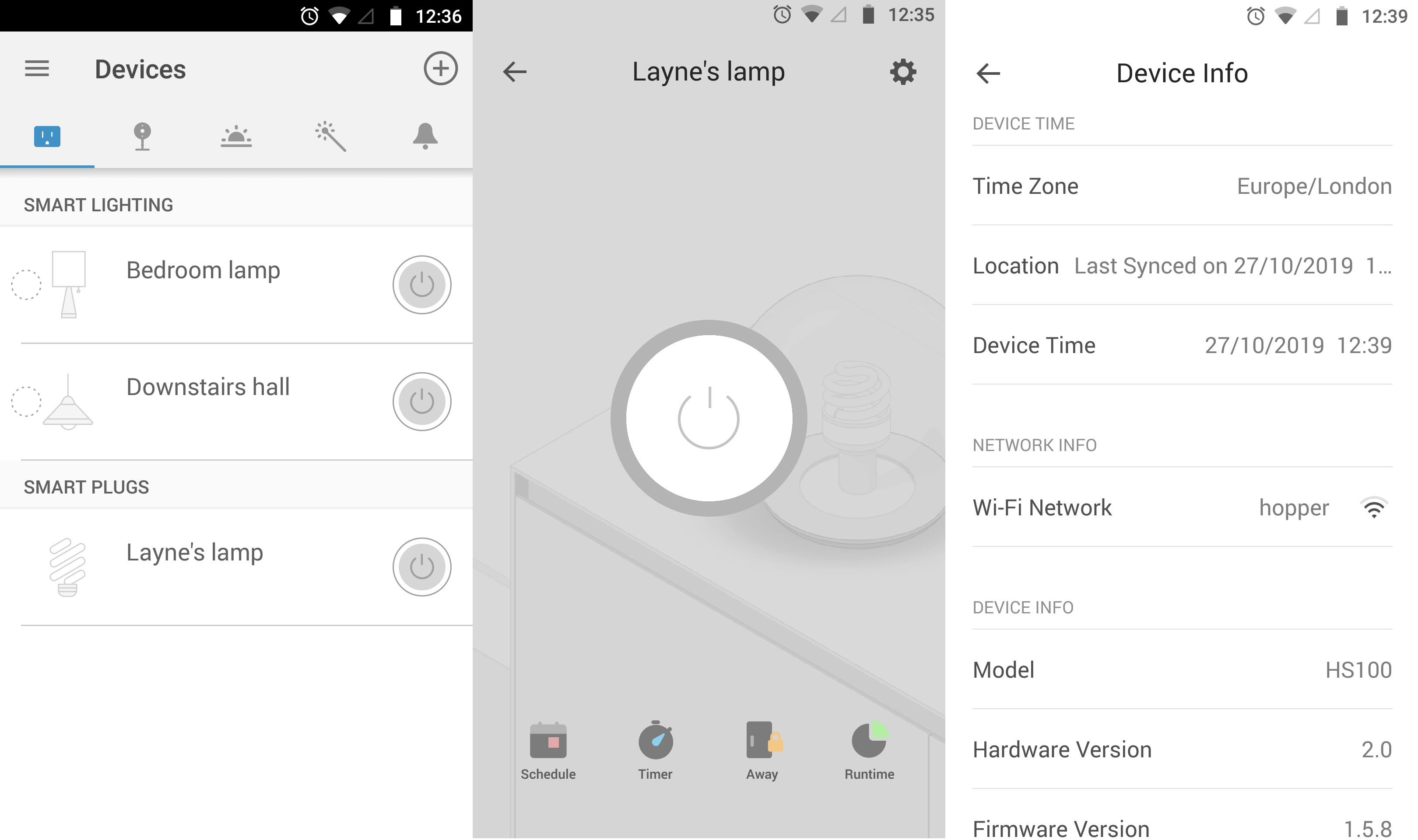 The options vary depending on device type, but for the HS100 you can create a schedule, set a countdown timer or away mode, or get information on how long the plug’s been switched on during the last day, week or month. Pay extra for the HS110 and you’ll also see how much energy the connected device is using. The countdown timer can turn the socket on or off, while away mode toggles it at random, helping fool burglars into thinking someone’s home. 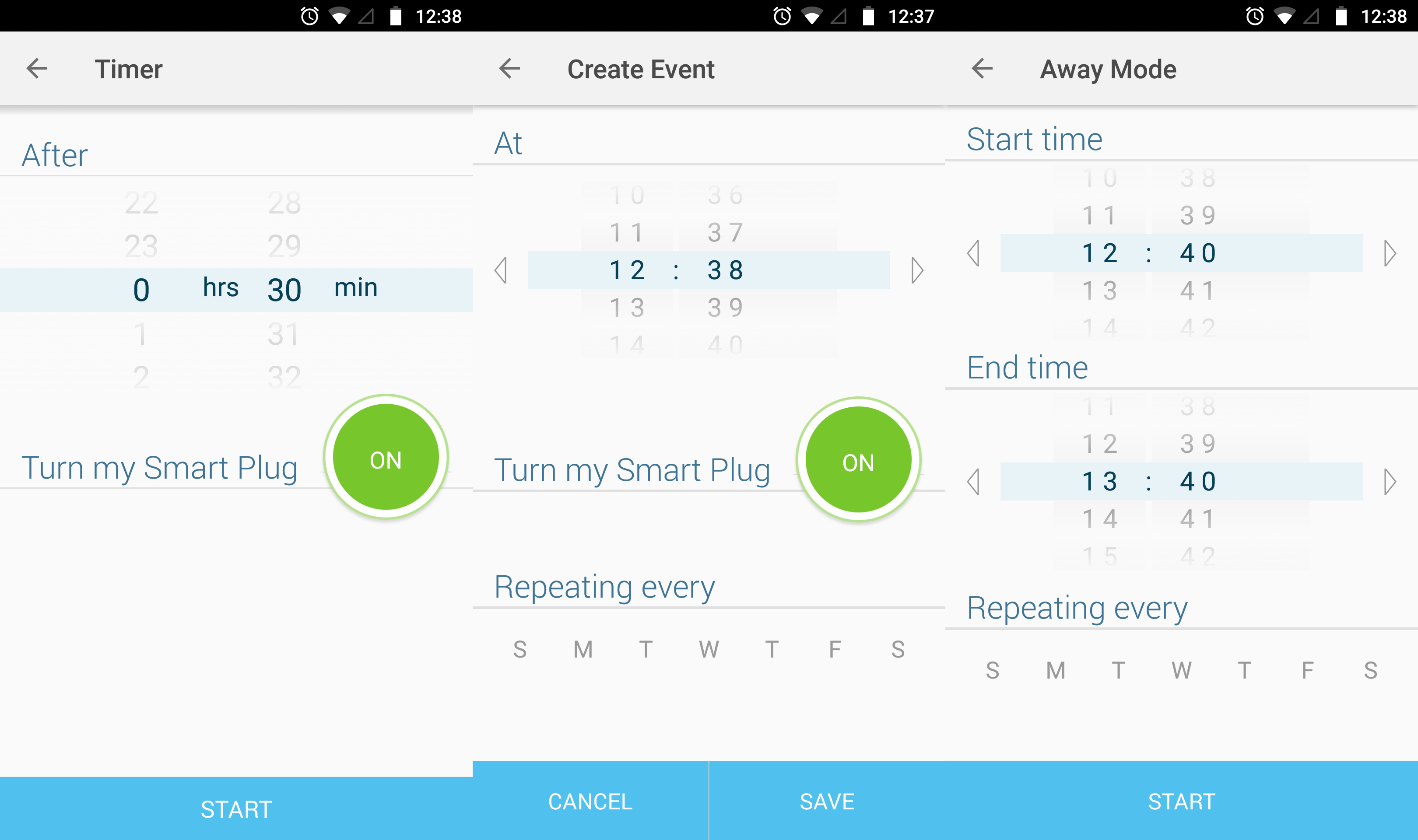 Kasa lets you group multiple smart devices into a custom scene, giving you an easy way to configure several with a single tap. For example, you might create Welcome Home to turn on your smart lights along with a heater plugged into the HS100.

If you want to, you can link Kasa devices to Google Home or Amazon Alexa, allowing you to control the HS100 by voice. The Kasa app has no geofencing function, so it can’t automatically turn on your devices as you come home, but you can configure these kind of scenarios using IFTTT.

Note, however, that Kasa only has IFTTT actions – you can’t use it to trigger actions in other IFTTT-compatible services. Another general limitation is that you can’t configure how the plug should behave immediately after a power interruption – it always returns to its previous state.

Our tests revealed the HS100 to be extremely reliable, picking up a wireless signal even in a known dead spot above a concrete floor. Pressing the manual button switched it on and off immediately. Changes triggered from the app were typically lag-free, too, but occasionally they would take two or three seconds – particularly after a long time without a command.

Some smart home ecosystems are significantly compromised if your broadband fails, but Kasa was quite resilient. Local control still worked well, with the HS100 responding to scenes and individual instructions. Of course, like other smart devices, you can’t control it from outside your home network if your internet connection goes down.

One surprise was that even with no device plugged in, the HS100 consumed a constant 2-3 watts of power. Over 24 hours we measured 60 watt-hours, equating a monthly consumption of roughly 2 kilowatt hours. While the 30p or so that’ll cost won’t break the bank, it does take the shine off the savings you might otherwise make by using a smart switch to turn off devices. It’s also odd given that TP-Link’s Kasa smart bulbs consume less than half a watt in standby.

The TP-Link HS100 Kasa Smart Wi-Fi Plug is an attractive and dependable way to add smart control to dumb appliances in your home. With no hub to invest in it’s a cheap option, yet the fully-featured Kasa app allows remote and scheduled control and supports integration with other smart and automated systems.

For this money, it’s hard to find fault. It is a shame that the Kasa app doesn’t support geofencing or create IFTTT triggers. We also wish the plug’s standby power was lower. However, used wisely – for example to switch off standby in multiple home entertainment devices – it could still save you money. If you have Philips Hue and don’t want the power monitoring features of this plug, the Philips Hue Smart Plug is a better choice. If you need a cheap and reliable smart plug, we’re happy to recommend the HS100.