Working with Bluetooth, the Philips Hue Bridge and Apple HomeKit, the Philips Hue Smart Plug is the most versatile such unit we’ve ever reviewed. In addition, the plug is exceptionally small, so you’re unlikely to experience issues fitting it into even the tightest of spots. Given its reasonable price, there’s little reason to look elsewhere – unless you need advanced features such as energy consumption figures, that is.

The humble smart plug is still one of the best devices you can buy to turn dumb products – such as an old lamp or kettle – into ones you can control remotely. There are plenty of options on the market, but the Philips Hue Smart Plug is one of the best.

Controllable via the Hue app if you have a Bridge, via Bluetooth directly, or even with a remote control, the Hue Smart Plug is one of the most flexible such units I’ve reviewed – and it’s also one of the best value.

Smart plugs can be quite sizeable, taking up a fair amount of socket space when plugging in. Not so with the Philips Hue Smart Plug, which is a neat-looking, unobtrusive cube. Finished in smooth white plastic, the small button up-top for toggling power on or off manually is the only unit that breaks the surface of the plug. 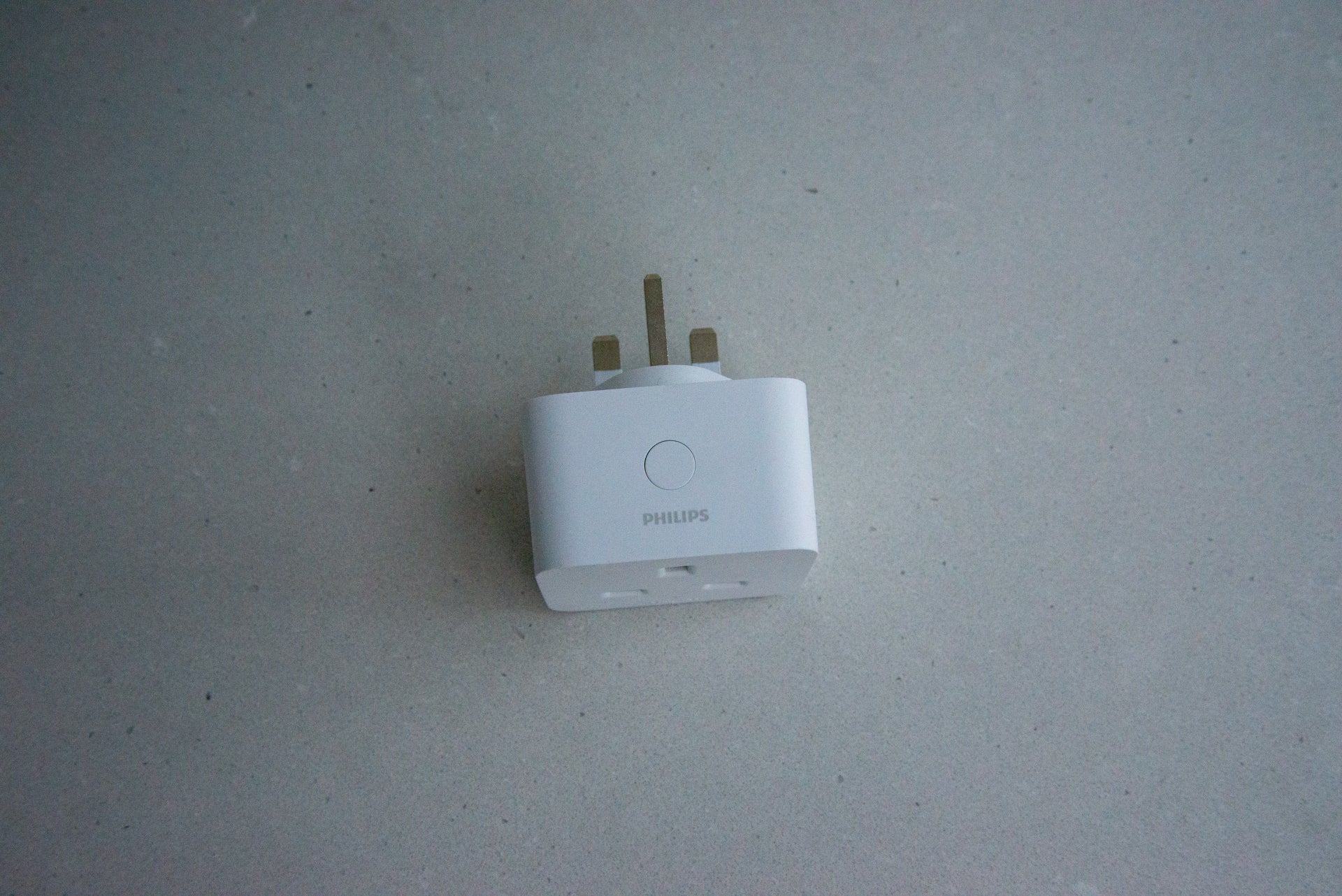 The button on top gives you simple on/off control

For greater control, you need to set up the Hue Smart Plug for remote control. There are four main options. First, you can download the Philips Hue Bluetooth app, connecting your phone directly to the plug via Bluetooth. This lets you control the plug when you’re within range of the device, but doesn’t provide remote control.

If you have a Philips Hue Dimmer Switch then you can pair this directly with the Hue Smart Plug. This provides simple on/off control, which may be all you need; note that the dimmer buttons don’t work here and neither do you get remote control. 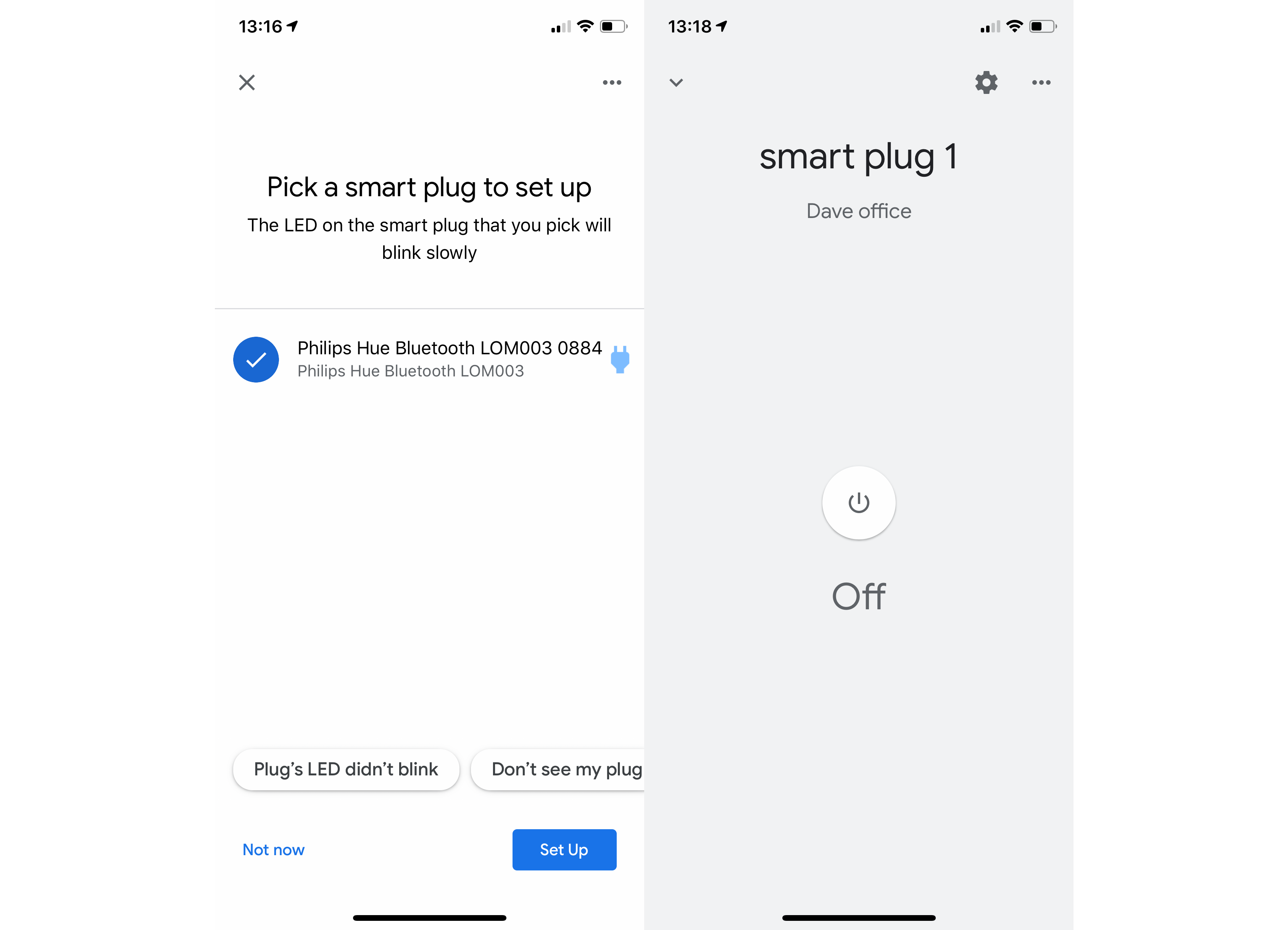 The above routes, particularly the Alexa and Google Assistant options, are useful if you don’t have a Philips Hue Bridge 2.0. If you do have a bridge, then use it, since the smart plug connects via Zigbee. As well as providing better range (each Zigbee device acts as an extender), you get greater control via the app; plus the smart plug can also be used in Apple HomeKit. For these reasons, the rest of this review focuses on using the Hue Smart Plug through a bridge as part of a full Philips Hue system.

All methods of connection offer simple on/off control of the smart plug. It’s when you use the app that you get real control over the smart plug, however. As well as having the ability to toggle the plug on or off, you can dive into the settings for more options. 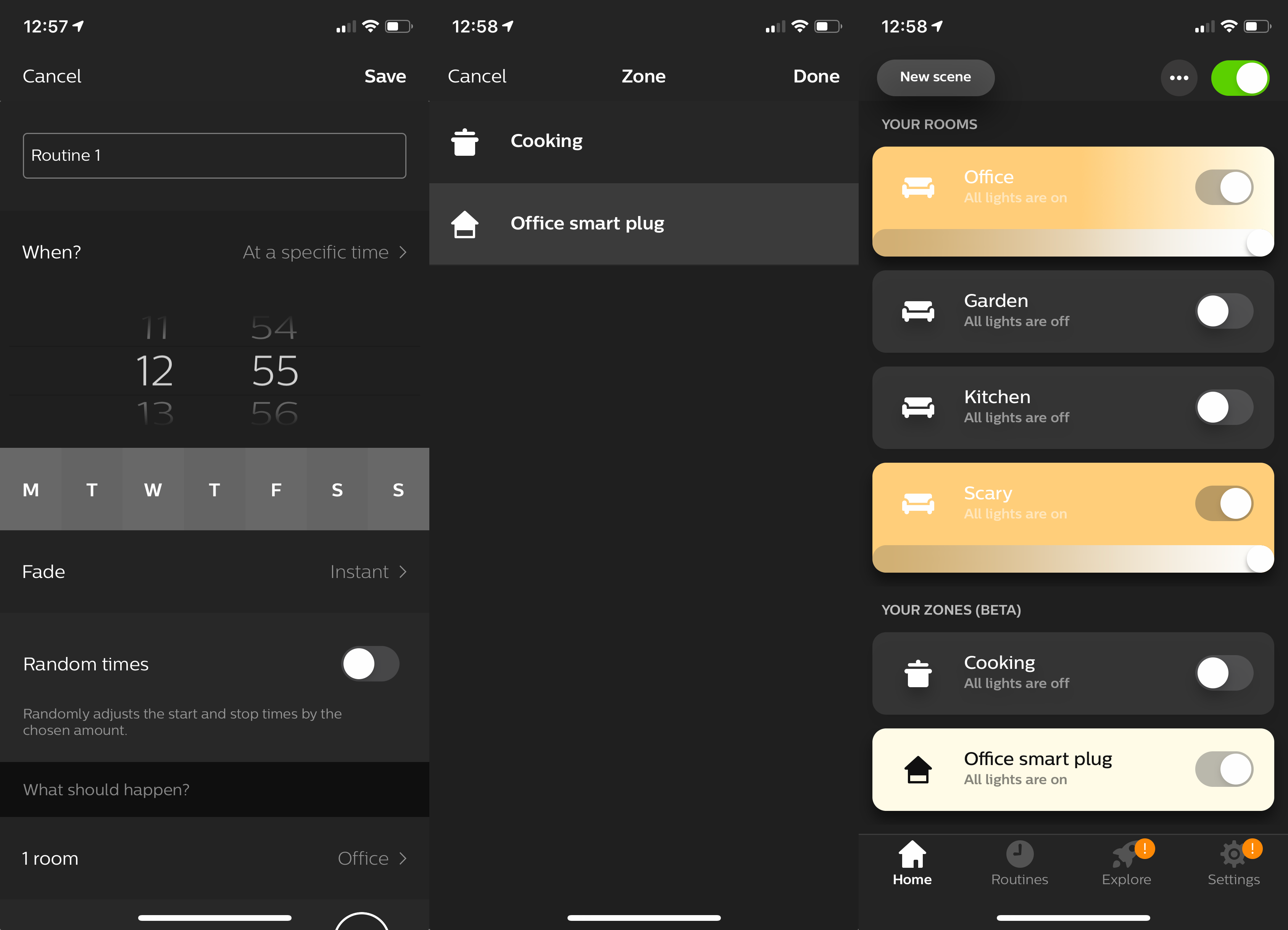 Routines let you configure when the plug turns on and off

Inside the app, the Hue Smart Plug is also controllable via any of the Hue accessories, including the Motion Sensor and Dimmer Switch. Each of these accessories can be set up to control a room, which means every light and the smart plug.

So, for example, if you want to turn on a lamp connected to a smart plug and your Hue lights when there’s motion, just put everything in one room. When the Motion Sensor picks up movement it will turn on your bulbs and the plug; everything turns off when there’s no movement. You can get similar control with the Dimmer Switch, having everything turn on when you tap the “on” button.

If you don’t want the smart plug to turn on with your regular Hue bulbs, you have some choices. You can set up scenes inside the app, so that the smart plug turns on only for some of them, then assign the scenes you want to the Dimmer Switch. For example, the first scene could turn on everything, but a movie night scene would dim your Hue lights and turns off the smart plug.

The Motion Sensor works in a similar way, allowing you to control which scene is activated when motion is detected, so you can leave your smart plug turned off.

Zones allow you to place the smart plug in a separate control area, which makes it easier to find in the app to toggle it on or off. However, with all of these setups, when you turn off the switch or the Motion Sensor detects that there’s no motion, the smart plug turns off, which you may not want to happen. If this is the case, you should put the smart plug into a separate room, so you can control it with accessories separately. 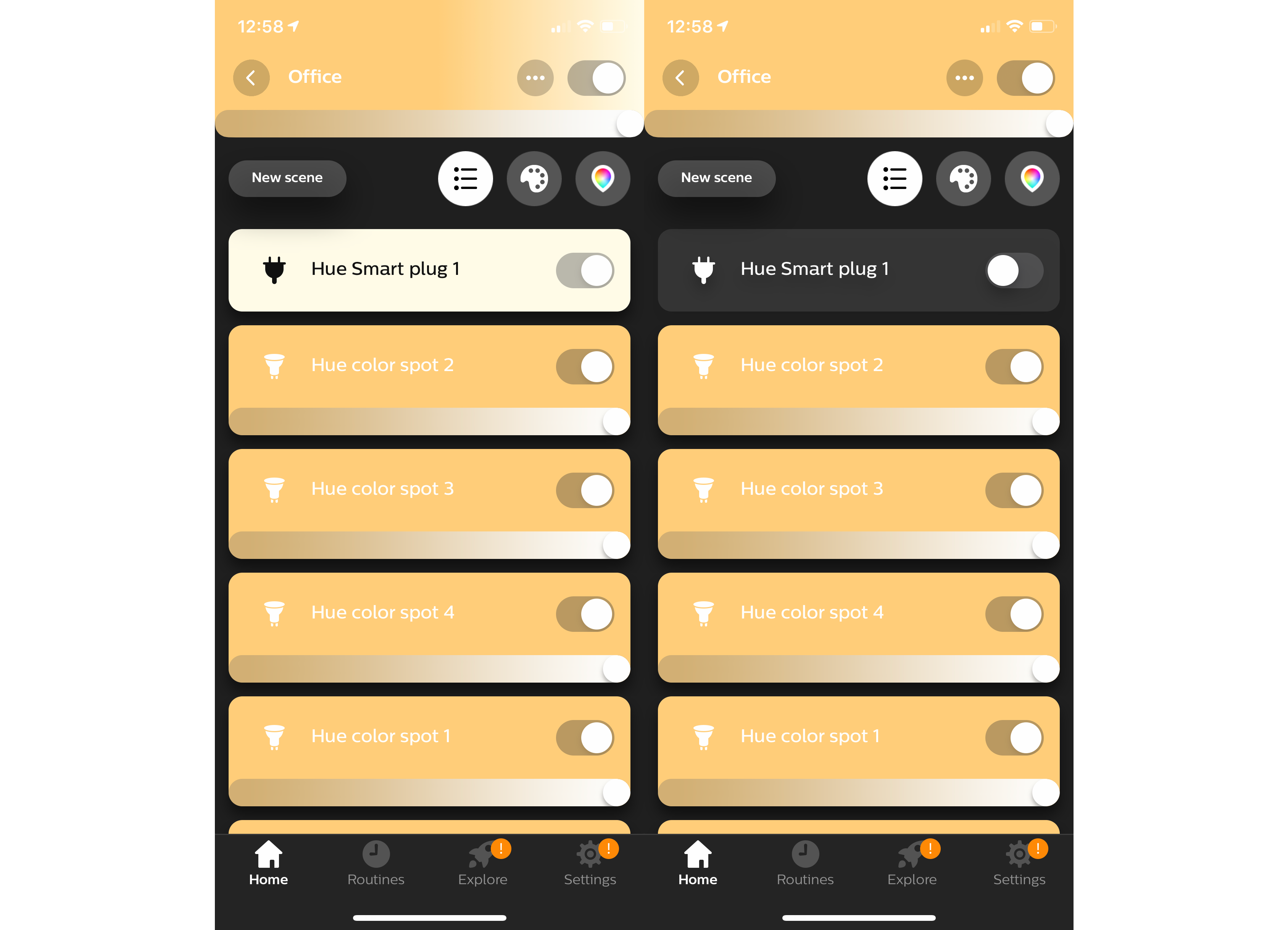 The app lets you toggle the plug on and off, but you may want to put it in a zone to make it easier to find

Using the bridge also means that the Hue Smart Plug appears in Apple HomeKit. From the Home app you can control the smart plug manually or include it in routines. Given the lack of HomeKit-compatible smart plugs, it’s nice to see a new model, particularly one that’s so reasonably priced. 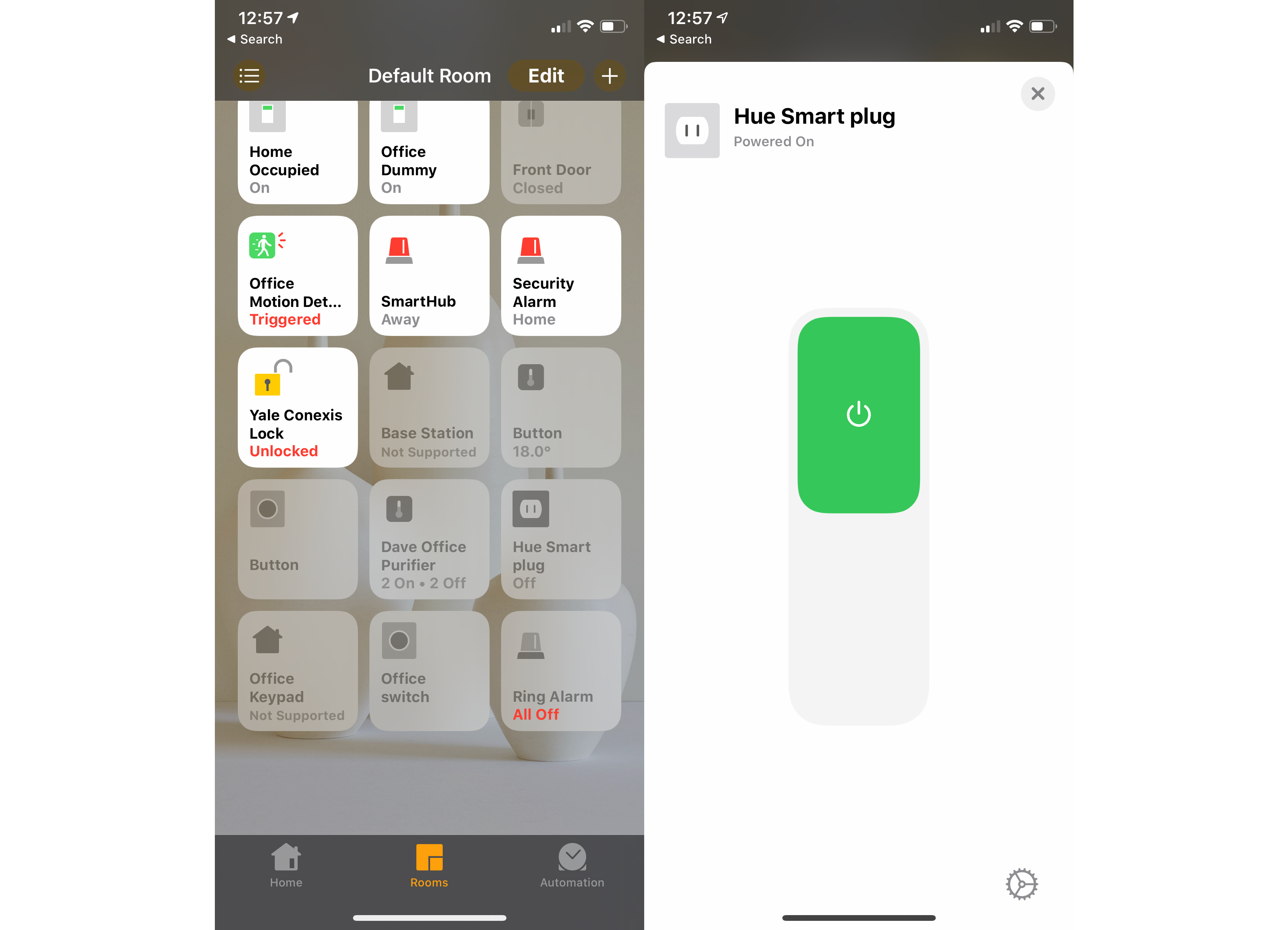 Finally, using a bridge means that you get Amazon Alexa and Google Assistant support at the same time (via Bluetooth you can only have one), which is great for houses with a mix of assistants.

Should you buy the Philips Hue Smart Plug?

It’s this degree of flexibility and adaptability that makes the Hue Smart Plug the best you can buy.