Available for PC, Mac and Linux

The first Total War game not to be based on human history, Warhammer is also the most human and most relatable of any Total War game yet. While it may lack the grand, historic sense of scope you may get from commanding a Roman legion into a decade-long crusade across Europe, or the barbarism of pillaging and raiding as the hordes of Attila, or seeing your first Arachnarok spider charge its way into a fray. In short, developer Creative Assembly has created its best so far.

It does all of this while continuing to manufacture a semblance of historic importance – as if your actions are slowly etching legend into fantasy history – but without laboring the point. And it’s great, because you needn’t take much notice of the fantasy jargon if it doesn’t interest you. As a franchise nut, however, the embellishment and detailed flourish is greatly appreciated.

Warhammer’s campaign is split between two main components. The first is the campaign map: a turn-based strategic overview, which – among other things – allows you to manage, expand and upgrade your settlements, recruit and move armies, conduct diplomacy and declare war. The map is your central hub for progression – a veritable trove of options – and benefits from some superb visuals that really sell the Warhammer world, from the verdant woodland of the Empire in the west to the barren craggy wastes of the east.

The second is the real-time battle system, which has been the series’ main staple since it began. The conflicts are just as thrilling, complex and challenging as they’ve been in the past; hundreds of infantrymen litter the battlefield, supported by special units such as steampunk tanks or towering trolls, and the addition of magic flying units – such as the Dwarfen gyrocopter or the Empire’s griffon mounts – lend a real flair and plenty of dynamism to each fight. 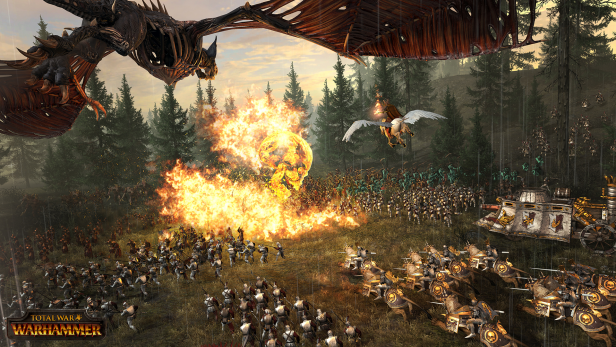 In addition, the AI is better than it has ever been in a Total War game. Your enemy feels like an opposing force that operates proactively, rather than one that simply reacts to your tactics on the fly. There remain some tried-and-tested maneuvers that seem to rout the enemy on more occasions than you might expect, but this is absolutely Total War at its best.

Despite its deceptively simple two-pronged setup, the game can often be daunting; the intricacy of its strategy is difficult to grasp, and the information overload that comes when starting a campaign is frequently overwhelming.

For new players, the game’s Advisor – a narrator-cum-helper – does an admirable job of drip-feeding vital tips as you progress. However, even he occasionally falters, leaving you wondering how certain portions of the game – siege mechanics and diplomacy, in particular – operate. This will no doubt be the sticking point for newcomers, but Total War veterans will relish the depth of the challenge.

There are only four playable factions at launch, five if you count the free Chaos Warriors add-on, but I haven’t had access to them. While this pales in comparison to Attila’s playable ten, Warhammer swaps a breadth of shallow cosmetic differences for actual mechanical depth, which makes for a far more diverse, more replayable strategy game.

For example, should you choose to play as The Empire, you’ll find the game’s most well-balanced faction; a nicely rounded mix of melee and ranged units, with a decent amount of magic options. They’re well positioned for diplomacy, with a large number of trading options. You’ll eventually receive access to some of the game’s coolest units, including a flying griffin mount for your commanding Lord. 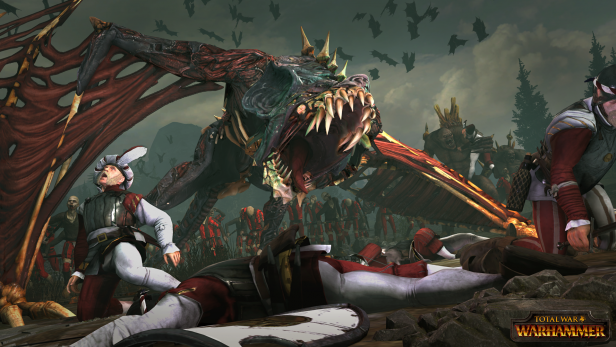 Contrast this against the Vampire Counts, who rely heavily on necromantic magic and have no ranged units, but are capable of raising undead to fight for them. Or the Greenskins, who lack the ability to trade with other races but benefit greatly from raiding other provinces, receiving combat buffs the more victories they win.

Finally, the Dwarfs, who focus heavily on diplomacy and trading to reach victory. They employ staunch defensive tactics in battle, but can also use a series of underground tunnels to move quickly under terrain obstacles, or to bypass enemy armies entirely.

Even these most basic faction traits provide a sense of how diverse your play experience can be. Each race has varying victory requirements, too, which need to be adhered to and learned well if you want to win. The Dwarfs, for example, hold considerable grudges against their foes whenever they make moves, so these grudges – compiled in the aptly named “Book of Grudges” – must be resolved before campaign victory can be attained.

After around 20 turns into my first campaign as the Vampire Counts, things began to stick. I fell into a satisfying rhythm of building up armies, exploring the campaign map, managing my income and army upkeep costs, and engaging in diplomacy (or decimating enemy forces where needed). Now more than over 100 turns in, I’m by no means a certified tactician, but the progression I’ve seen in myself is really gratifying.

As well as teach you how to approach warfare, the game does a great job of tying settlement upgrades into your armies to create intuitive progression; the more types of buildings you have, and the more they’re upgraded, the more unique types of units you can recruit.

There are cool, individual quests that pop up as you progress, too, which are separate from the overarching campaign objectives and act as more immediate tasks for you to complete; the occasional unique battle to fight, the infrequent assassination of an enemy hero, and so on.  Dilemmas rear their heads later on in the game, too, forcing you to make quite drastic decisions that could have repercussions for you later on. You can complete quests at your leisure, but the game incentivises you by rewarding you with loot that’s useful for bolstering the skills of your Heroes and Lords. As for dilemmas, the fact that you have to make a choice there and then adds tension to the occasionally plodding pace of the campaign map.

Outside of the game’s huge campaigns, a single-player skirmish mode lets you command armies into single battles, which is great for getting to know a faction before you start a campaign with them. It also allows you to get a good look at the best late-game units, without putting dozens of hours of hard work into earning them.

The game’s online component mirrors the single player, featuring both campaign and battle options. The multiplayer campaign is very much like it is in the Civilization games – slow paced, and a huge time-sink that isn’t particularly viable for the average player; but it provides a fantastic way for purists to play friends over the course of a few days, weeks or months. The online battles, more than any other part of multiplayer, benefit greatly from swapping the game’s AI for real living people – something the game’s computer still can’t mimic, despite the various improvements that have been made. It’s great fun.

As a piece of creative work, Total War: Warhammer is more than an ideal partnership between two iconic franchises. As well as nailing the look, feel and atmosphere of the Games Workshop universe, Creative Assembly has delivered a strategy game that will keep series fans busy for hundreds, if not thousands, of hours, while also giving Total War newcomers a good – if not quite perfect – leg-up into the world of deep, grand strategy. It adds new mechanics and refines old ones, and improves greatly on the series’ terrible reputation for stability issues at launch.

The steep climb to victory is a long one, but war was never meant to be easy.