We’re
used to keys being on the small side on tiny hybrids, but Toshiba’s
slimline design comes with a host of irritating layout quirks. The Enter
and Space buttons are too small, the Function keys are tiny, and many
of the keys to either side of the Space bar are annoyingly narrow. The
quartet of cursor keys are tiny too. While other laptops make up for their
lack of height with more width, that’s not happened here.

The
main letter keys, meanwhile, are wider than they are tall, which takes
some getting used to. Every rival opts for square buttons and, while all
suffer from layout quirks, none are as bad as this. 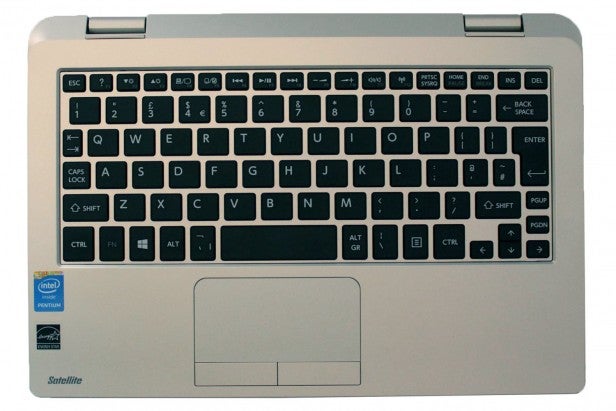 The typing
surface doesn’t just suffer from a poor layout. The keys themselves
don’t have enough travel to the point where sometimes keys just don’t
feel like they’ve been pressed at all – and, sometimes, we had to
double-tap a button for it to register on-screen.

May of the Toshiba’s
hybrid rivals have poor keyboards, but the Toshiba’s lack of travel and
irritating layout makes it the worst of the bunch – it’s only good enough for status updates and emails, not for longer work projects.

The trackpad is
better, with a smooth surface and good tracking. It uses two separate buttons rather than a moving single surface and they are a little spongy but it’s a minor issue, and they’re perfectly usable. 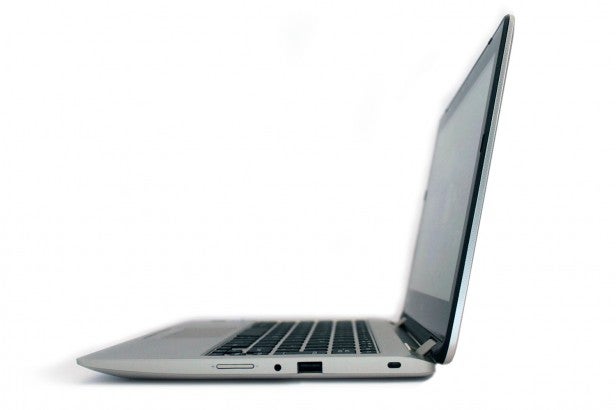 The low-end laptop and hybrid markets are dominated by Intel’s Bay Trail architecture, which is used inside Atom, Celeron and Pentium chips. The latter is used by Toshiba in this machine and, considering the price of this system, it’s a solid choice: its 2.16GHz speed beats the minimum speeds of the Celeron and Atom parts inside the competition, and it’s able to use Turbo Boost to top out at 2.66GHz. Four gigabytes of memory is fine; twice as much as the HP and Asus, and the same amount as the HP.

It’s a reasonable specification for a machine at this price, and the Toshiba held its own during benchmarks. Its PC Mark 7 result of 1,796 fell between the slower HP and the faster Asus, and the Toshiba led the way in Geekbench with a score of 3,692. The nearest challenger, the Asus, managed 3,104.

The modest Intel HD Graphics chipset means only basic games will work on this laptop, but the Pentium processor and 4GB of RAM mean the Toshiba is still able to outpace other machines in 3Dmark’s low-end Ice Storm test. Its result of 21,857 overhauled the Asus’ 18,320. 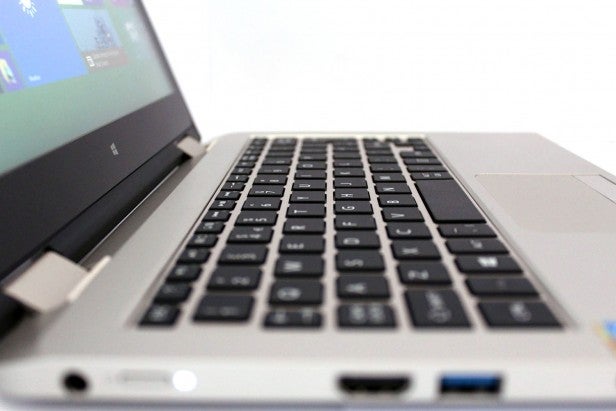 It’s a good showing, but this is still a £350 laptop, so expectations need to be managed. The Satellite can only handle web browsing, movie playback and less intensive productivity tools with a little more aplomb than its rivals.

A 500GB hard disk means ample storage space, but it’s not exactly fast: its sequential read and write speeds of 85MB/s and 68MB/s are mediocre. Despite that speed boot times remain around 20s thanks to Windows 8.1’s Fast Startup option, but the lack of storage pace is highlighted elsewhere, with a noticeable delay when applications load or you task Windows with hunting down search results. It’s not a ruinous issue, but it’ll prove frustrating if you like to whizz around a PC, getting stuff done.

The low-end processor meant heat and noise weren’t troublesome. Stress-tests saw no noise emerge from the system thanks to a fanless design, and the processor’s modest top temperature of 57 degrees didn’t cause any heat to hit the outside of the chassis.

That’s good, but we can’t be so complimentary about the software situation. This isn’t a machine with much grunt to spare, and it’s hampered further by bloatware. McAfee pop-ups are a constant irritation, and the desktop is augmented with shortcuts to CyberLink media tools, eBay and the awful WildTangent Games front-end. Cold comfort comes from a handful of more useful apps that are installed but less obvious, including Spotify, Skype and Evernote.

Our PowerMark test loops a mix of web browsing and video calling simulations with the screen at 40% brightness and, even with those low-intensity tasks running, the Toshiba disappointed.

Its longevity of five hours and 36 minutes isn’t enough for a full day away from the mains, and it’s less than every rival: the HP Pavilion lasted for almost six hours, the Acer for more than seven, and the table-topping Asus handled eight hours and ten minutes.

That 40% brightness level wasn’t much cop, either; with this option activated the screen sits at a dim 54 nits. We ran the Satellite through the same tests with the panel at 100% brightness, but the situation worsened with a result of two hours and 17 minutes.

They’re poor results, and the battery’s recharge rate of 36% over thirty minutes isn’t much comfort – it’s average, and only good for a couple of hours of use with the screen dimmed.

Should I Buy the Toshiba Satellite Radius 11 L10W-B?

We’re used to hybrids missing the mark in critical areas – some are too heavy, others are slow, and a few are just too expensive. Toshiba’s latest addresses all of these issues: it’s lighter than its rivals, its Pentium processor is faster than competitors, and its £350 price means it won’t break the bank.

The Radius improves on its competition in those areas, but there’s only so far its £350 price will go. The screen is poorer than on any rival, with cold colours and a lack of brightness and contrast, and battery life is similarly disappointing. The keyboard also puts paid to any work prospects.

It’s this lack of balance that puts us off the Toshiba. Its rivals may be a little slower and heavier, but they’re still fast and light enough to be lugged around in a bag, and machines like the Asus and Acer offerings have better screens and bigger batteries. We’d opt for them over the inconsistent Radius.

The Satellite impresses with a solid body that’s slimmer and lighter than hybrid rivals, and its Pentium processor is a little quicker. Terrible screen quality, poor battery life and a disappointing keyboard hamper its prospects, though, and mean we’d rather opt for one of its more-balanced rivals.