What is the Toshiba Satellite Radius 11 L10W-B?

Hybrids are one of the toughest products to build and sell at the moment: designers have to craft a device to replicate the best attributes of both tablets and laptops, and customers need to be convinced that a dual-mode machine can replace dedicated devices.

Toshiba’s previous hybrids haven’t hit the mark, but it’s having another go with the Satellite Radius 11. First impressions are decent: the 11.6in screen means this machine strikes a good balance of size between an iPad and a laptop, and it costs a reasonable £349.

We’ve criticised Toshiba’s previous hybrids for being clunky and heavy and, thankfully, the firm has listened – there’s none of that here. The screen flips through 360° using a pair of smooth, sturdy hinges, and the whole device weighs 1.3kg and is 21mm thin. That makes it thinner and lighter than its key rivals, including the 1.4kg HP Pavilion x360 and the Asus Transformer Book T200TA, which comes in at 1.54kg and 33mm when its two halves are joined together. It’s not top-heavy, either, which can be a problem on detachable devices with screens full of components. 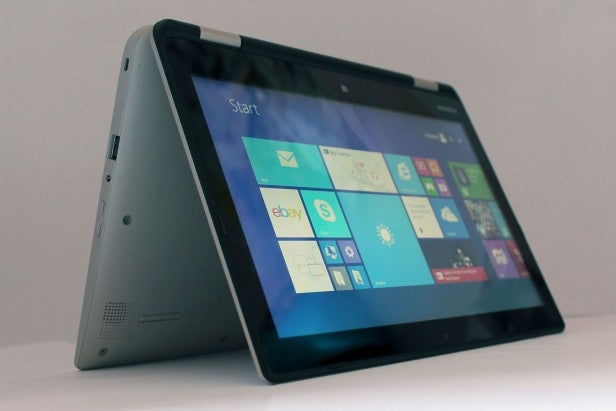 It’s an impressive start, although hybrids remain littered with caveats. The Toshiba’s isn’t detachable, so it suffers when compared to rivals – that heavy Asus splits in half to become a 750g, 12mm tablet, and it’s the same story with the Acer Aspire Switch 11. As ever, proper tablets are even smaller and more manageable; this may be Toshiba’s smallest-ever hybrid, but its 11.6in still makes single-handed use tricky.

The slim, light Satellite improves on previous Toshiba hybrids, although hands-on time with the Radius reminds us that it’s still a budget notebook. Pressing the rear of the screen causes the desktop to distort, and while the base is stronger there’s still some give in its plastic surfaces.

No metal has been used, and the aesthetics won’t turn heads – the grey plastic, dated lid pattern and thick, glossy screen border are all underwhelming, especially when stacked up against the HP’s red, glittery finish.

The edges house single USB 3.0 and USB 2.0 ports, an HDMI socket, headphone jack and an SDXC card slot. The interior is no more remarkable: a single-band 802.11n Wi-Fi chip, Bluetooth connectivity and no Gigabit Ethernet limit this machine’s versatility. Rivals are generally better, with wired internet, more USB ports and dual-band wireless found across most competitors. 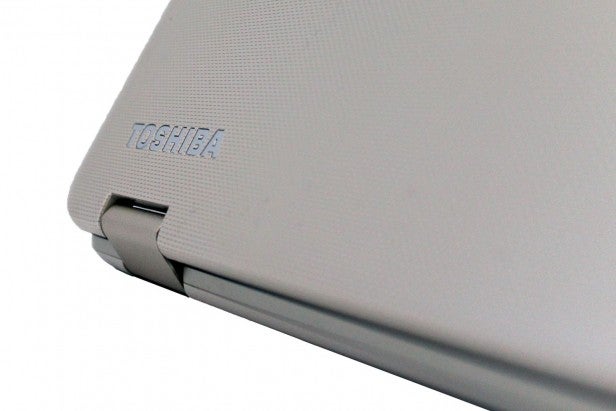 The Radius has an 11.6in touchscreen with a 1,366 x 768 native resolution – not enough pixels to properly enjoy Full HD movies or to really get on with work, but standard for this level of machine.

It might match rivals for pixel count, but the Radius falls behind in benchmarks. The colour temperature is the first noticeable problem: its result of 7,622K is far cooler than the Asus and HP machines, and it makes the entire screen pallid. Skin tones eschew warmth for an insipid blue hue, and bright colours lack vibrancy. That’s joined by a Delta E of 10.28, which is again worse than rivals and enough to cause noticeable problems with colour accuracy.

The brightness level of 213 nits is low; barely above the HP, and a long way behind the 307 nits of the Asus. The Toshiba has a black level of 0.47 nits, and those figures combine for a contrast of 453:1 – a bad result that’s closer to the 337:1 of the HP than the 1,059:1 of the Asus. These figures lead to more issues: blacks appear grey, and the lack of contrast means nuance of dark and light vanishes.

Our final test measures how much of the sRGB gamut a screen can handle and, unsurprisingly, the Toshiba failed to impress, with score of 59.8% being poor by any standard. Viewing angles are also noticeably bad; move your eyes away from dead-centre and the screen quickly loses even more punch. 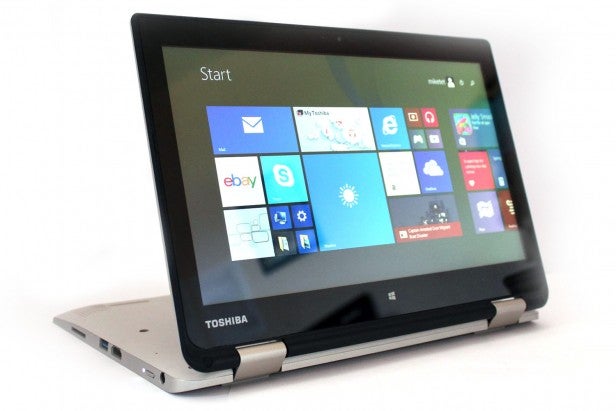 The lack of quality means this panel is only suitable for the bare minimum of tasks, such as web browsing and document creation. In most other departments, it’ll suffer: image quality isn’t good enough for movies or photo editing, and the resolution prevents serious work. The Toshiba’s screen is better than the HP’s panel because of its improved brightness and contrast, but it’s miles behind the Asus.