I don’t mind saying right away that I’ve really been looking forward to getting my hands on Toshiba’s 46SV685D. Especially since I was given a startlingly in-depth run-through of its potential talents at this year’s IFA show in Berlin.


Usually my interest in a current Toshiba telly would be inspired by price; the brand has been doing some pretty impressive stuff at the budget end of the TV market recently. But with the 46SV685D it’s actually the TV’s technology that’s got me champing at the bit, for this 46in set happens to be Toshiba’s first to use LED lighting.


Obviously there are different types of LED lighting around, so we should identify right away what LED flavour we’re talking about with the 46SV685D. 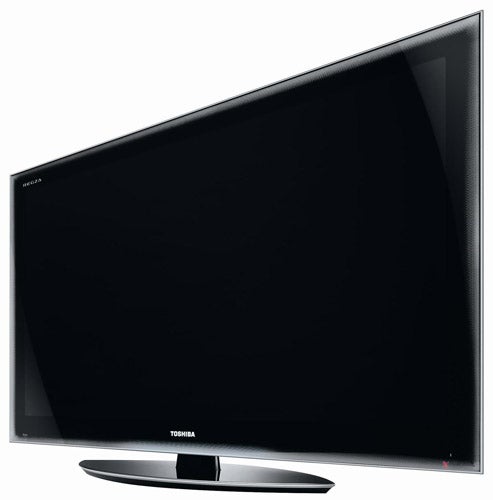 The first and probably single most important point is that, as the TV’s rather chunky rear would suggest, the 46SV685D uses a direct (rear mounted) LED array rather than the edge-mounted LEDs currently serving Samsung’s B7000 and B8000 TVs so well.


Next, there’s a respectable count of 128 LED arrays, all dimmable on an individual or ‘local’ basis. This leaves as the only disappointment (given the 46SV85D’s rather high £2,381.65 price) the fact that the LEDs use white rather than RGB dimming, potentially reducing the 46SV685D’s colour range compared with RGB models like Sony’s X4500s or Sharp’s ultra-expensive XS1Es.


Before we get too hung up on this white dimming, though, it’s worth pointing out as I have in some previous LED reviews that the white dimming approach can arguably deliver a colour range that’s actually more closely mapped to current video standards than you get with RGB dimming. 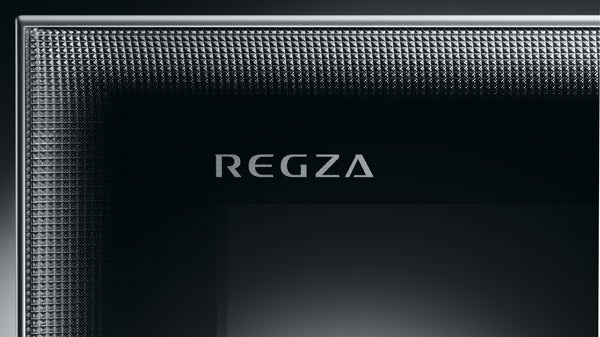 Design-wise, despite its chunky profile, the 46SV685D delivers at least a touch of opulence thanks to its single level fascia, high-gloss finish and the way its bezel introduces a tinge of grey that lightens as you move towards the bezel’s outer edges. It’s worth adding while we’re talking about the 46SV685D’s design that the ‘crystal’ sheet adorning the fascia isn’t just an aesthetic device; Toshiba also claims that it enhances colour and contrast reproduction.


Turning to the 46SV685D’s connections, my eye was immediately grabbed by an Ethernet port. This is the first such jack I’ve seen on a Toshiba TV, raising hopes that it will open up a brave new world of PC streaming and online functionality. The reality, though, is that it only does one of these two things – the PC networking one. Toshiba hasn’t yet established any online service. 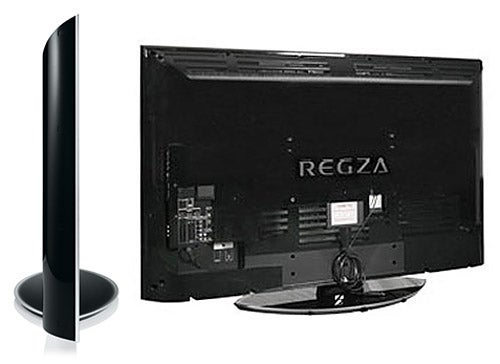 Even though such a service would have been nice to find on such a premium TV, though, it’s worth reflecting that the online services of most rival brands are still rather malnourished, to say the least.


Less ‘new’ but still crucial among the 46SV685D’s connections, meanwhile, are four HDMIs, a 15-pin D-Sub PC input, and not one but two multimedia slots, one for USB devices and one for SD cards. What’s more, while the SD card slot can, as we’d expect, only take JPEG photos, the USB can also play music and even DivX video files

Turning to other specifications and features of the 46SV685D in our mission to justify its price, my mind quickly goes back to the IFA presentation I mentioned earlier, from which it was clear that Toshiba had worked closely with an independent imaging group – a member of which did the presentation – to optimise all the image for video use. 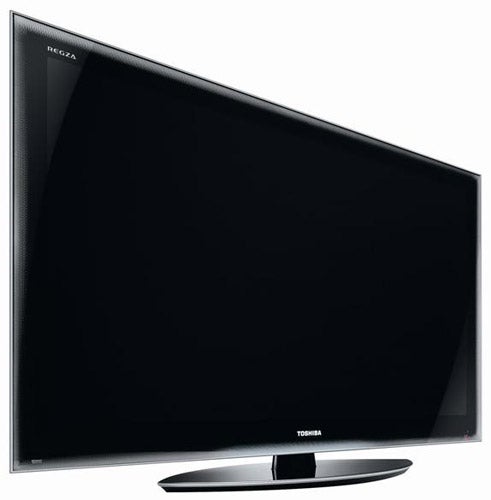 This 200Hz engine isn’t a ‘true’ one, in the sense that the screen doesn’t actually fully refresh 200 times a second. Instead, as with Philips’ and LG’s 200Hz TVs, it relies on a scanning backlight system to come up with its 200Hz figure. But that’s certainly not to say that it won’t still produce a positive impact on motion reproduction, and as such could be another significant factor in justifying the 46SV685D’s cost.


Toshiba also seems to have tried to give the 46SV685D a little custom install appeal, via a strikingly expansive set of tweaks within its tidy if uninspiring onscreen menus. Particularly noteworthy are a good colour management system, and a fine degree of gamma adjustment.


Switching the 46SV685D on at last, I didn’t find myself feeling the instant feelings of devotion that I’d hoped for. Colours with any of the provided picture presets look surprisingly hit and miss tonally, and even black levels – usually a ‘sure thing’ with direct LED – don’t look as profound as I would have expected. 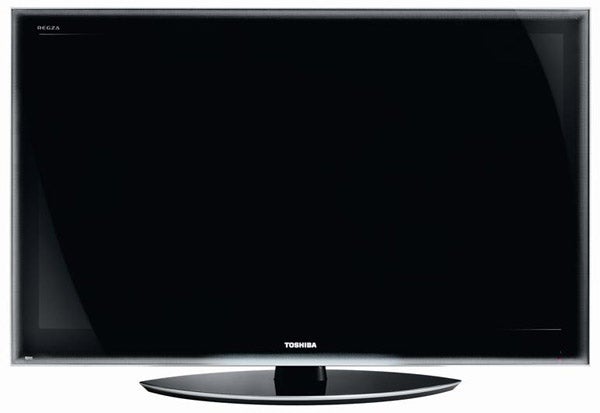 Just as well, then, that a little time spent in the company of a calibration aid such as the HQV Benchmark DVD or HD Video Essentials Blu-ray can improve the 46SV685D’s pictures no end.


Black levels, in particular, can be improved massively, leaving them ultimately looking extremely deep and free from grey mist. As we noted in our recent reviews of Sharp’s new LED TVs, the local dimming technology that helps deliver the 46SV685D’s extreme contrast performance can lead to some tiny bright details getting lost. But this doesn’t happen severely enough to leave me feeling ‘cheated’ out of detail, and I have little doubt that some movie fans will be happy to trade a few missing pixels of image content in return for black levels as good as those of the 46SV685D.


Paying close attention to dark scenes on the 46SV685D reveals another bit of good news, namely that images suffer scarcely at all with direct LED’s ‘halo’ phenomenon, where the local dimming system leaves glowing auras around patches of bright image content.

The 46SV685D also manages to deliver pictures of striking sharpness – with standard definition as well as high definition! Obviously it’s with HD that the set’s talent for reproducing detail really shines. But it’s arguably the clever way the 46SV685D’s Resolution+ engine elevates standard definition to something at least halfway to HD – without introducing loads of noise – that stands out versus many of its Full HD rivals.


The 200Hz engine, meanwhile, does its bit to further boost the image’s clarity by reducing judder and motion blur. It isn’t the most potent motion compensation system we’ve seen; Philips’ 9000 series TVs are much more aggressive about suppressing judder and blur, for instance. But the 46SV685D at least does its work tidily and sensitively, leaving a natural-looking image afflicted with precious few processing side effects.


The 46SV685D does plenty right with its colours, too. They’re quite – though not explosively – vibrant, and they exhibit lots of tonal subtlety. By which I mean that there’s no sign of colour striping or blotching, even over skin tones. 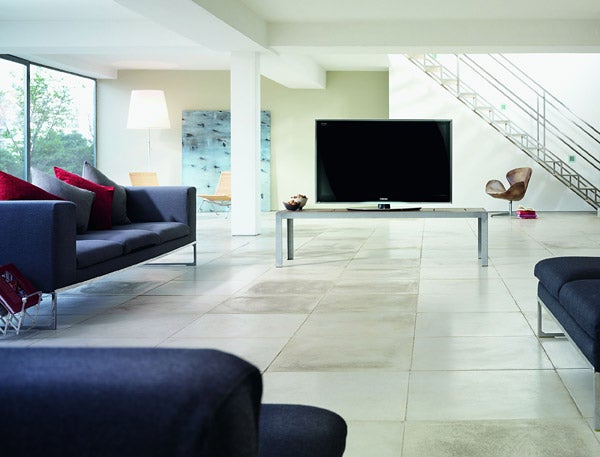 For all the 46SV685D’s considerable strengths, though, every now and then I felt that the pictures suddenly didn’t look quite right for a moment. Eventually, I managed to narrow this down to apparent difficulties in rendering a really natural green tone, leading to heavy green content looking a bit OTT, and some dark scenes showing a general slight green undertone.


The only rider to this statement occurs if your living room set-up dictates that any members of your household will have to watch a 46SV685D from much of an angle. For you really don’t have to be sat at all far down the side of the TV before parts of the screen during dark scenes start to look grey or even a bit yellow, while colours also start to lose saturation.


The 46SV685D’s speakers, meanwhile, do quite a nice job overall, seemingly using the larger-than-normal bulk of the TV’s chassis to produce a solid amount of bass that doesn’t tread heavily on the toes of either the mid or treble range. A little more definition and soundstage openness would be needed before we could give Toshiba’s flagship TV a nine out of 10 for sound, but it’s certainly not bad.


Although it seems a bit daft to me that a TV which apparently prides itself on satisfying the AV cognoscenti should ship with such generally poor presets as those of the 46SV685D, the fact remains that with a bit of effort, the 46SV685D really can produce some scintillating LED-backlit picture quality.


That said, I’m reluctantly not feeling quite able to give the 46SV685D a TrustedReviews Recommended badge. Why? Because of its £2,381 price. For ironically given how aggressively priced most of Toshiba’s other flat TVs are right now, the 46SV685D just seems too expensive. After all, you can pick up Samsung’s ultra-glamorous UE46B8000 for nearly £800 less these days, and Pioneer’s still-imperious 50in Kuro PDP-LX5090 plasma can still be found going for £2,300 or so.