If there was ever a TV that needed no introduction, it’s Pioneer’s KURO PDP-LX5090. For this 50in plasma TV has been receiving all manner of frenzied media coverage/speculation for some time now, for two key reasons.

Second, the LX5090 has fascinated us media types because it’s the last 50in screen design that’s going to roll off Pioneer’s own production lines. The next Pioneer generation will emerge from Panasonic factories, as part of a co-operative deal struck between the two companies earlier this year. 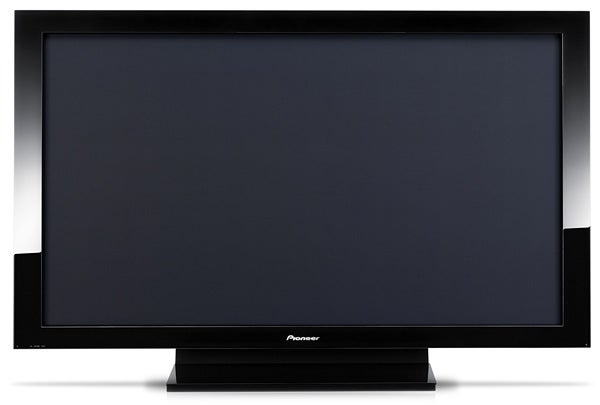 Pioneer continues to assure us all in the strongest terms that the move to Panasonic production lines will not affect the quality of its future screens in the slightest. But even so, I suspect there are at least a few telly fans out there kind of hoping that the LX5090 really is a belter, so that they can get one now and not have to worry about any future Pioneer/Panasonic shenanigans.

Not surprisingly, the LX5090 certainly looks the part. It effectively wears a slightly more refined, more slender (94mm) version of the straightforward but strikingly minimalistic high-gloss black bezel that has adorned Pioneer plasmas so classily for a good couple of generations now. It’s beautifully built, too.

It’s also well connected, with three v1.3 HDMIs standing out, as well as a USB port for digital photo viewing (with Pioneer’s superb Home Gallery software to back it up), a CAM slot to support what’s clearly a built-in digital TV tuner, a subwoofer line-out, and a digital audio output. 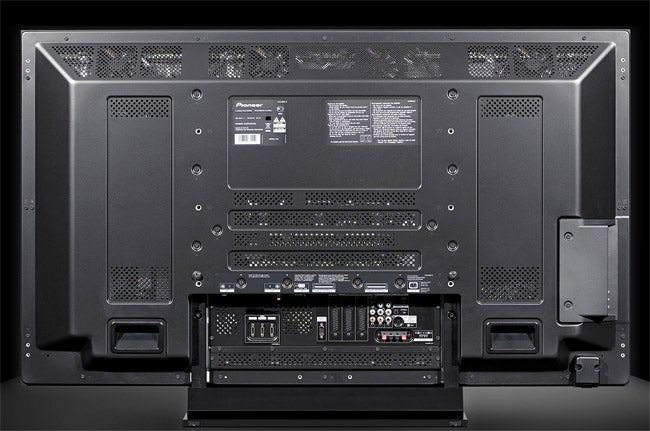 I guess I wouldn’t have minded a fourth HDMI on a TV with such a premium price tag as the LX5090; at £2,349 (or more if you want the speakers, stand or wall mount options) it is, after all, around twice the price of something like Panasonic’s TH-50PZ80. But I’m kind of hoping the LX5090 will deliver enough goods elsewhere to make me quickly forget such trivial wishes.

All the on-paper evidence suggests that the LX5090 certainly will deliver the goods where it matters most: picture performance. For it turns out that rather than sitting on its hands for a year, as many manufacturers might have done having established such a technological lead as Pioneer did with its first KURO TVs, Pioneer has been doing anything but standing still. 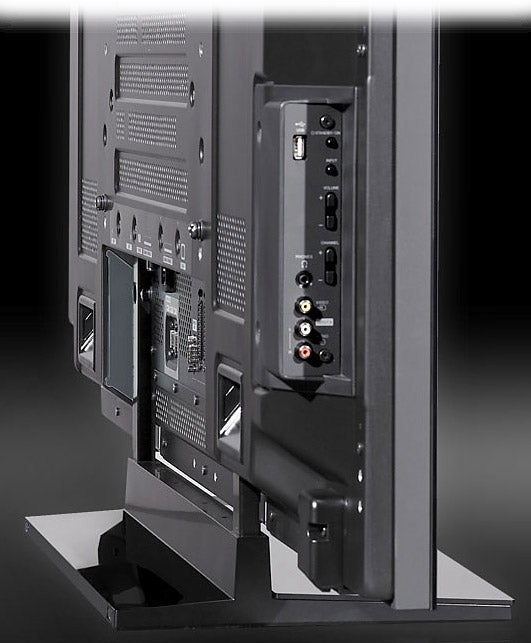 In fact, remarkably the brand claims that its new screens deliver black levels five times as deep as those of the previous KURO generation – even though the black levels of that previous generation were so far in advance of the competition that they actually led to the birth of the KURO sub-brand name, since KURO is Japanese for black.

The LX5090’s black level advances are down in no small part to the introduction of a new, even more refined version of Pioneer’s already class-leading Direct Colour Filter technology, via which Pioneer has managed to pretty much completely stop plasma cells from bleeding light – something that inevitably results in reduced contrast in surrounding pixels and reduced brightness in the pixel that’s ‘leaking’.

With accidental light seepage removed, the latest, newly optimised generation of Pioneer’s picture processing is now free to control each pixel much more independently and accurately, with the net result that pictures should have much more black level depth, colour naturalism and brightness than they did before.

We won’t bore you with all the other, continuing production elements that go into making ‘the KURO effect’, as we’ve done them to death in previous Pioneer reviews. But suffice it to say they’re all very much still there, doing their bit.

Other bits and bobs about the LX5090 we will quickly mention, though, are its unusual amount of progressive scan flexibility, including a 72Hz mode for enhanced 1080p/24Hz playback (72Hz being a neat 3x multiple of 24Hz); new 100Hz processing for enhanced image stability; an extravagant amount of ultra-flexible noise reduction tools, including specialist MPEG blocking and mosquito noise options; and all manner of automatic picture optimisers, including one that can assess via a sensor not only the brightness but also the colour tone of light around the TV, and adjust the picture accordingly. 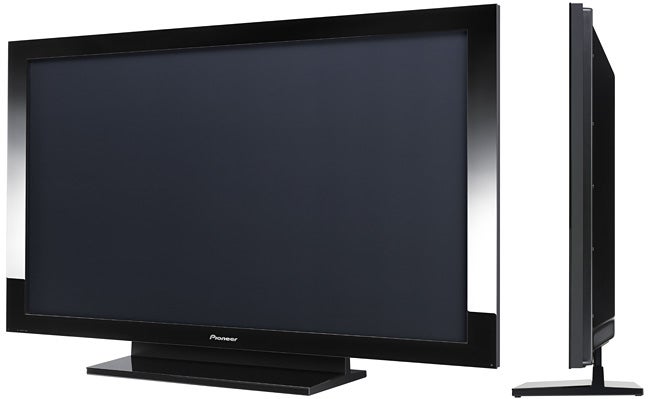 The only even slightly bum-note about the LX5090 so far – except for its hefty price – is the fact that it’s rather complicated to set up, thanks to some obscure feature names and menu labels. Also, I couldn’t help but feel the pain of technophobes as I had to delve deep into the LX5090’s menus just to ‘enable’ its HDMI connections.

Oh well – at least the remote control used to probe the menus is an absolute peach, combining a great layout with a superbly tactile, weighty and cool metallic finish.

As you can probably imagine, I’m getting pretty eager by now to find out just what black levels five times as good as those witnessed on previous KURO TVs look like. And the short answer is: absolutely, jaw-droppingly, not-far-off-pant-wettingly amazing. 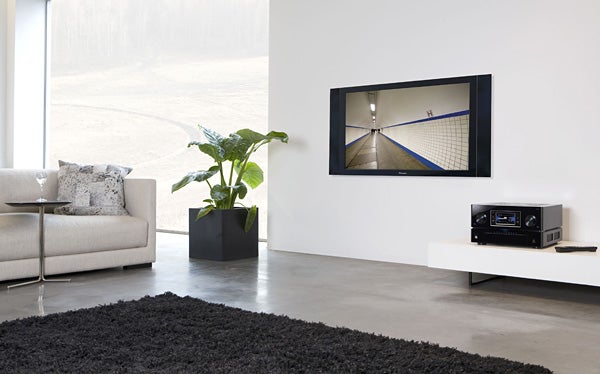 It’s possible, I guess, that you might find this fact boring; just another example of a journalist waxing lyrical as part of a general media/Pioneer love-in. But hopefully you’ve read enough of my reviews on TrustedReviews by now to realise that I don’t have any political or technological agendas, or any favoured brands. So when I tell you now that the LX5090’s black levels are by a country mile the finest I’ve ever seen on a flat TV, I’m simply telling the truth. What’s more, it’s a truth you certainly don’t have to be a trained technology journalist to see.

Even if you sit the LX5090 alongside one of Pioneer’s own 8th-generation panels and feed them both something with lots of darkness, such as the opening credits to ”Sweeney Todd: The Demon Barber of Fleet Street” on Blu-ray, the extra depth to the LX5090’s black levels positively shouts out at you. So you can imagine how striking the impact is against any other flat TV you care to mention.

It’s possible, I guess, that some of you are thinking that we’re putting too much weight on the LX5090’s black level response; there are, after all, many other elements to a picture besides black level.

But in this reviewer’s humble opinion, black level is the single most fundamental part of a TV’s picture performance, the foundation from which nearly everything else is built. And as perfect evidence to support this point of view, it just so happens that the LX5090 also excels – to class-leading effect – in other picture areas, too.

The LX5090’s colours, in particular, are simply in a different league to those of any other flat TV I can think of, delivering the sort of radiant intensity usually only found with LCD technology along with the sort of wide, natural colour palettes usually associated with plasma technology.

Add to this ‘best of both worlds’ scenario immaculately subtle colour blends thanks to a combination of the screen’s Full HD pixel count and Pioneer’s really outstanding image processing, and you really are fully ensconced in AV heaven.

And that’s without even touching on the LX5090’s phenomenal knack with fine detail. Fed the impressively detailed Blu-ray transfer of truly terrible Blu-ray movie ”10,000 B.C.”, the Pioneer effortlessly portrays every CGI hair on the sabre-tooth tiger’s body, every grain of sand in the desolate landscapes, every pore on the faces of the Neanderthal-but-English-speaking actors… honestly, the detail levels are so extreme, pure and noiseless that they’re almost enough to make you forget about ”10,000 B.C.’s” awful acting, story and staging. And if there’s any greater compliment you can pay a TV than that, I can’t think of it! 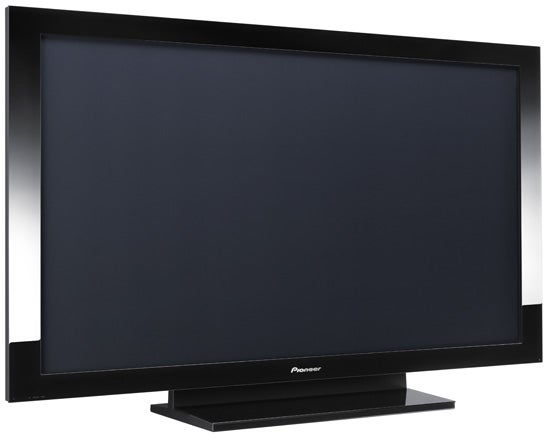 If you need yet more justification for splurging well over two grand on an LX5090, then consider also the picture’s unprecedented dynamism, which finds some of the purest, richest whites we’ve seen resting right alongside the deepest, most natural and most profound blacks in town.

Then there’s the remarkable astuteness of Pioneer’s various ‘automatic’ picture adjustment systems – very handy if you’re too scared to tinker with all the picture options yourself. Or how about the gorgeous clarity and smoothness of its motion handling? And the outstanding effectiveness of the LX5090’s various noise reduction systems, which are among the best I’ve ever seen at tackling noise without introducing nasty side effects?

Obviously you have to treat some of the Pioneer’s image settings with care at times; for instance, I personally would advise you to deactivate all the noise reduction systems completely while viewing a good quality HD source. And I’d also advise you to keep adjusting the PureCinema mode according to what you’re watching, rather than merely leaving it permanently on, say, Advanced (which I found to be the best mode to use with Blu-rays).

But with just a few simple precautions you’ll be free to enjoy the absolute maximum benefit from a TV that outshines all of its rivals today by so great a margin that its initially steep-looking £2,350 or so asking price is suddenly turning into an absolute bargain.

Try as I might, nothing I can write in this review can do full justice to the truly extraordinary picture quality of the LX5090. You have to see it to fully believe it. So if I were you I’d start begging, borrowing or saving the necessary cash so that you can get one at home and start ‘seeing’ it for yourself as soon as humanly possible.