The 40L3453DB is a 40-inch full HD Smart TV that can be yours for just £400. In other words, Toshiba is delving into potential serious bargain territory again. But is it really as great value as it sounds on paper? 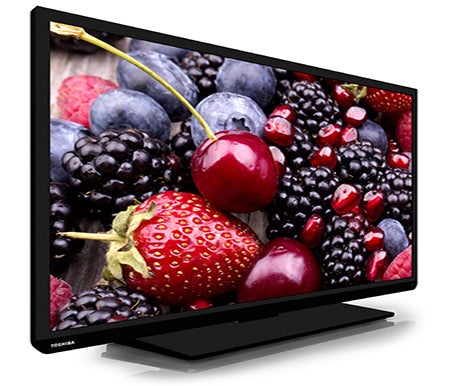 The 40L3453DB is as bland a TV as we’ve seen this year. The matt black of its plain rectangular frame looks plasticky, and the addition of a strip of gloss plastic along the bottom looks more clumsy than stylish. Especially as it leads your eye down to a stand that’s about as unglamourous and chunky as it gets.

The frame is slightly wider than those we see around many modern TVs too, and the rear ain’t exactly skinny either. In short, the 40L3453DB’s shelf appeal comes pretty much solely from its price tag…

The 40L3453DB’s rear does boast a decent number of connections, though. Three HDMIs lead the way, while the set’s impressive (for the 40L3453DB’s money) multimedia talents are delivered via a single USB port, a D-Sub PC port, an Ethernet port, and a built-in Wi-Fi system. 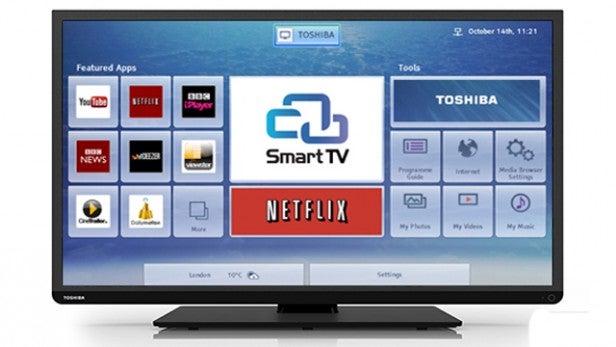 The USB supports playback of photo, music and video files, and pleasingly as well as allowing you to go online with Toshiba’s Cloud TV platform the network ports let you stream the same range of files from networked DLNA computers using the TV’s Media Server functionality.

The Cloud TV system on the 40L3453DB is essentially a stripped-back version of that found on Toshiba’s 2013 TV range (the brand’s new Cloud engine only kicks in higher up Toshiba’s latest range). It’s stripped down in that it gives you just one hub instead of multiple hubs, with show recommendation avatars and some of Toshiba’s more advanced content finding/shortcut tools being the most notable feature cutbacks.

Online content levels are below average by modern standards. There are just 20 apps available in total, with key video playback services – always the main attraction of online TV systems – comprising Netflix, YouTube, the BBC iPlayer, Viewster, and BBC News. This means that at the time of writing Amazon Instant, Blinkbox, 4oD, Demand 5 and the ITV Player are all conspicuously absent.

We guess we shouldn’t get too downbeat about this considering that arguably any smart TV service is a bonus on a £400 40-inch TV. But we’re certainly looking forward now to getting our first look at the new Cloud TV engine on Toshiba’s higher-end 2014 TVs.

The 40L3453DB’s screen specification is slightly better than you would expect for its money. It’s a full HD screen for a start, and surprisingly it’s not just a bog-standard 50Hz one. Rather, it’s driven by Toshiba’s AMR200 processing to deliver a 200Hz-like effect to boost motion clarity and reduce judder. 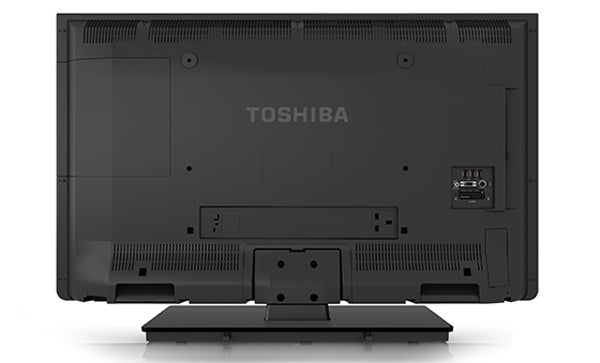 There’s also a Freeview HD tuner rather than the merely standard def version we wouldn’t have been wholly surprised to find for £400, and the set claims a native contrast ratio of 5000:1 that rises to 25000:1 when you employ its dynamic contrast system. Both these figures are reasonably promising.

Trawling through the 40L3453DB’s menus reveals a familiar sight. For aside from using a different colour scheme, the OS is identical to that used in Finlux’s recent TVs. Which gives us a pretty big clue as to the heritage of the panel at the 40L3453DB’s heart (Turkish manufacturer Vestel).

Among the most notable features in the 40L3453DB’s menus are a multi-level dynamic contrast feature, a 10-level skin tone adjustment, a red-to-green colour shift slider, and the option to adjust the gain of the RGB colour elements. All of which adds up to a decent degree of calibration for such a cheap set – though we do miss the fuller colour management suite Toshiba used to provide on even its cheap sets.

The 40L3454DB’s initial installation routine is quite good at guiding you through all the key set up areas of the TV, including its network systems. However, the menus run aggravatingly slowly, especially when it comes to anything that involves accessing Cloud TV.

Getting the best out of the pictures requires a little care with some of the TV’s settings. With standard definition sources we’d recommend that you use the noise reduction system on its low setting, contrast reduced to around its 50 level or slightly lower, and the dynamic contrast system on low.

With HD you should turn the noise reduction off, nudge the contrast slightly lower than you did for standard definition, and treat the Dynamic Contrast system with more suspicion. As in, with some films that contain a lot of dark content you might find that with the dynamic contrast system in play the picture’s underlying brightness level skips about too much and too often to permit comfortable, immersive viewing.

One little thing we love about the setup of the 40L3453DB, though, is that it ships already fixed to its stand. Whoop. Though there is a downside to this too, we guess, in the cumbersome shape of the enormous box it ships in.