At the risk of sounding like we’re channelling Forrest Gump, if there’s one thing we’ve learned from testing many cheap and cheerful TVs over the years it’s that you never know what you’re going to get. Some manage to strike a solid balance between all the many elements that go into making good picture quality, others do mostly OK but come a major cropper in one or two areas, while still others are just all-round dreadful. Fortunately the 40L3453DB fits into the first of these three categories. 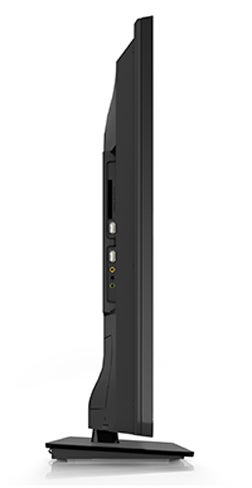 It manages to steer clear of all the most obvious budget TV ‘rocks’. With dark scenes, for instance – which routinely cause cheap TVs the most trouble – it was a major relief to find hardly any evidence of the sort of backlight inconsistency/clouding that’s a particularly common budget TV problem. Especially, we’ve found, with panels sourced from Vestel.

What’s more, the depth of black the 40L3453DB can produce is surprisingly convincing. First, there’s not as much greyness hanging over dark areas as usual with budget TVs. Second, the tone of the black colour is fairly natural – by which we mean it doesn’t suffer heavily with a blue or greenish undertone. And third the decent black levels are delivered even without the dynamic contrast system in play, meaning you don’t have to worry about the image’s brightness jumping about all the time.

To put some perspective on the 40L3453DB’s black level efforts, there is still a slight grey veil over dark scenes compared with the stunning dark scene efforts of the (now £490) Sony 40W605B we tested recently. And there’s also a hollower look to dark scenes than on the Sony thanks to Toshiba’s set not resolving shadow detail as successfully. But if £400 is as far as your budget will stretch the 40L3453DB is hard to beat on the black level front.

It also handles motion quite effectively by cheap TV standards, suffering less with judder and, especially, motion blur than might have been expected. This fact helps pictures look quite detailed and crisp with HD sources, even when you’re watching action scenes.

The 40L3453DB’s colour reproduction is a cut above the budget norm too. There’s no great range to the palette, perhaps, but within this limitation colours still look quite natural, even with skin tones, and there’s some pleasing finesse in the way subtle blends are rendered.

We do have to finish up with a couple more problems, though. First, the TV’s viewing angle before contrast starts to slide is a little limited, and second the picture isn’t especially bright, which could be problematic if you’re looking for a screen to go into a bright room like a kitchen or conservatory.

Used as the main TV for the review period
Tested for more than a week
Tested using industry calibrated tools, discs and with real world use
Tested with broadcast content (HD/SD), video streams and demo discs
Previous
Toshiba 40L3453DB Review Next
Sound and Verdict Review