Toshiba’s UL863 range didn’t get off to the best of starts. The 46in Toshiba 46UL863 didn’t float our boat at all, thanks to a combination of a seriously flawed picture performance and a rather half-baked set of multimedia features.

However, we’re more than prepared to give the UL863 series another chance as we take delivery of the 32UL863. For a start, experience suggests that the 32UL863’s considerably smaller 32in screen could well suffer much less from the backlight consistency issues that troubled us so much on the larger model.

Also, online TV services have become a classic ‘movable feast’ this year, with new content getting added week by week. So there’s every chance that Toshiba’s Places system will have blossomed from the rather impoverished effort in evidence when we checked out the 46UL863 back in July. 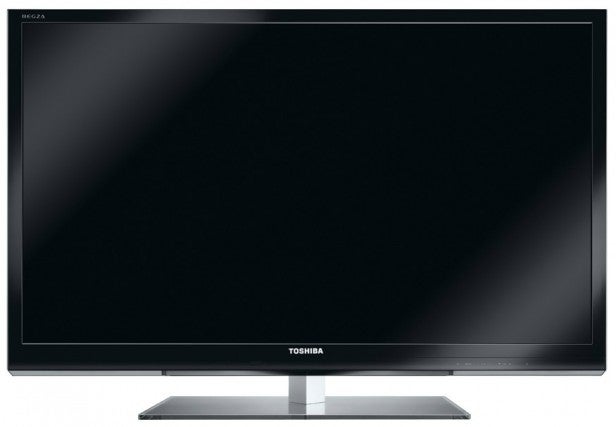 The first comparison drawn between the 32UL863 and the 46UL863 doesn’t benefit the smaller model, though. For its smaller size doesn’t show off the set’s slim, nicely finished design as strongly as the bigger model does, looking much more like just ‘A.N. Other’ dark-coloured flat TV. At least from a distance.

The TV’s rear end is still impressively slim, though, and the bezel is trimmer than you’d usually find with such an affordable 32in TV.

The 32UL863’s connections are plentiful. Four HDMIs should be enough to cater for pretty much any home AV set up, plus there’s a D-Sub PC port (allowing the screen to double up as a PC monitor), and a pair of USB ports. These USBs can be used for either recording video from the TV’s Freeview HD and satellite (though not Freesat) tuners to USB HDD, or for playing back video, photo and music file formats from USB storage devices. 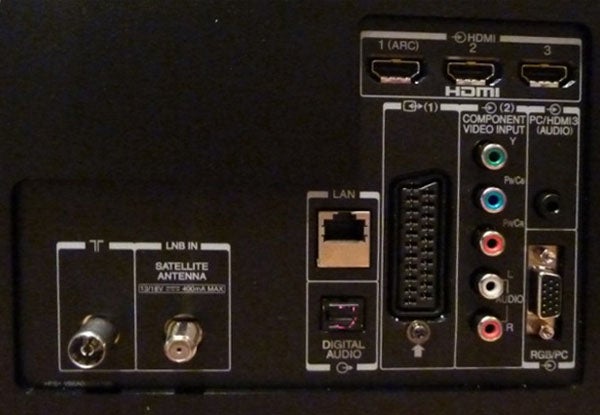 The set also supports playback of multimedia files stored on your PC so long as that PC is DLNA-enabled and, ideally, equipped with Windows 7.

One rather cool thing about the 32UL863’s DLNA capabilities is that they can be enjoyed wirelessly via a built-in wi-fi system. You don’t have to add one of those aggravating – and usually optional extra – USB Wi-Fi dongles most TVs expect you to use if you don’t want to/can’t hardwire your TV into your network.

If you’re thinking of hanging a 32UL863 on a wall, it’s worth noting that most of the connections we’ve talked about here face straight out of the TV’s rear, rather than being positioned more conveniently for side access.

Contrary to our hopes, looking for improvements that might have taken place to Toshiba’s online Places service since July doesn’t bear much fruit. The key video services, for instance, are still limited to YouTube, the iPlayer, Daily Motion, Viewster, Woomi, Box Office 365, The Cartoon Network, and HiT Entertainment. The final three of which are, of course, subscription only, meaning the amount of ‘free’ video fun you can have with Places right now is really quite limited.

Toshiba’s ‘Music Place’ currently only includes the Aupeo personal radio service, while the News Place only carries ‘meteonews.tv’. Woo. In fact, pretty much the only significant addition to Places since July can be found in the Social Places area, where we were pleased to discover a new Facebook app. Presumably Twitter will follow too at some point.

We were also disappointed to find that the latest version of Places still doesn’t fix the annoying issue whereby you can’t actually access the iPlayer or YouTube from within the main Places menus. Instead you still have to bail out of Places and access the iPlayer and YouTube separately for some reason. 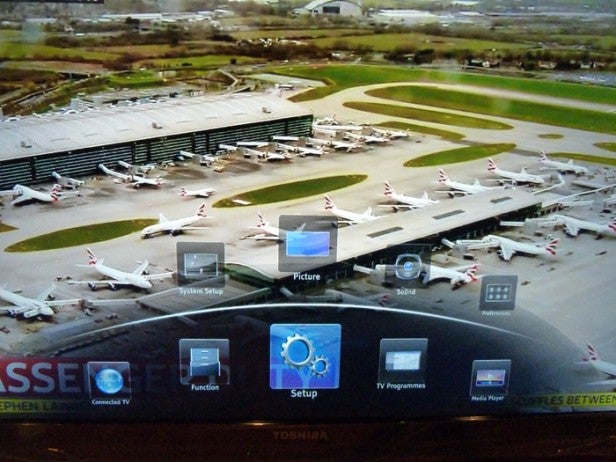 Toshiba has introduced an attractive ‘two wheel’ onscreen menu system for its latest TVs, and this does a pretty good job of handling what turns out to be a strikingly long list of picture adjustments for such an affordable and relatively small set, ranging from control of the set’s 100Hz motion processing to gamma and colour management tools.

The first thing on our checklist as we settled down to watch the 32UL863 in action was its backlight consistency. Basically we were praying that it didn’t suffer so badly with the clouding and unevenness that so damaged its 46in sibling.

And… thankfully, it doesn’t. For while there is still a degree of illumination inconsistency, it’s much less defined (so long as you keep the backlight down to 65 at the most, anyway) than it was on the larger model. This means that you only see it on really dark sequences rather than during a really quite wide range of material as you could with the 46UL863. The 32UL863’s backlight clouding is also only a major issue if you’re watching in a very dark environment; in a bright room you’re much less likely to spot the areas of extra brightness. 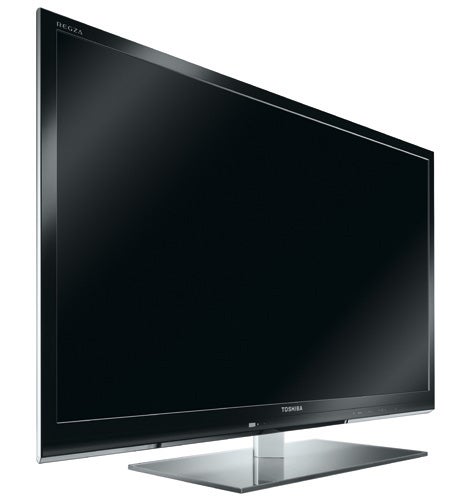 The less aggressively inconsistent backlighting in the 32UL863 makes it far easier to engage with dark scenes – even though it has to be said that the black levels the set achieves are fairly average by today’s standards, particularly if you opt not to use the provided active backlight control. Personally we surprised ourselves by actually using this tool for most of the time, finding it less ‘jumpy’ with its brightness adjustments than most, as well as largely immune to the sort of light ‘blocking’ sometimes seen with edge LED dimming systems.

Even with its backlight reduced to 60-65 to suppress the backlight clouding, the 32UL863 manages to produce some pretty punchy pictures, combining vibrant (but not gaudy) colours with a pretty expansive contrast range despite the not particularly inspiring black levels.

However, it has to be said that the 32UL863 is a bit short of shadow detail in dark areas once the backlight has been set to the best level for achieving backlight consistency. Also, in keeping with many other small, flat TVs, its viewing angle is very limited, with contrast drop-off and other backlight problems setting in rapidly once you get to around 30 degrees off axis.

After a bit of a warm up – 20 minutes or so – the 32UL863 did noticeably better with its natural motion performance than its 46in sibling did. Without any motion processing active there’s less loss of resolution and blurring when showing moving objects than usual for the 32UL863’s price level – a fact which helps the screen produce some really very sharp, detailed HD images. Turning the Active 100 system to its Standard setting removes judder too, though we didn’t find the results of its efforts particularly natural looking – a problem that counts double if you try to use the Active 100 Smooth option. 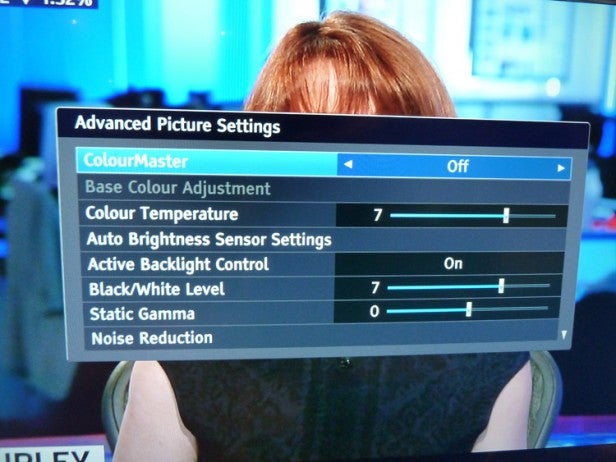 There are further signs of a lack of picture processing quality with the 32UL863’s standard definition pictures, which can look a little noisy and soft. Toshiba’s provided Resolution system can help on the sharpness front, at least, provided you only used it on one of its lower strength settings (for setting it higher starts to introduce pretty aggressive amounts of noise).

While on the subject of the processing in the 32UL863, it also – as we would expect – has absolutely no part to play if you’re using the screen as a gaming monitor. For where we measured anywhere up to 100ms of input lag using the TV’s non-Game presets, switching it into the processing-free Game mode brought the lag all the way down to an actually superbly low average figure of just 19ms.

The 32UL863’s audio performance, finally, is acceptable for a skinny 32in set, but nothing more. Its strength is its clarity in the treble and upper-mid audio ranges, but unfortunately and entirely predictably there’s precious little going on in the lower-mid and bass segments of the audio spectrum.

Verdict
The 32UL863 is altogether a more engaging option than its bigger 46UL863 sibling, thanks in particular to its less extreme backlight consistency flaws and the fact that its smaller screen isn’t quite as revealing of other issues. But its Places online system is still behind rival systems, and it’s still not quite good enough in the black level and standard def departments to deserve an unqualified recommendation.