Not for the first time in recent times, we’re feeling a little confused by a TV we’ve got in our test room. Today the TV in question is the Toshiba 46UL863B, and the main – but certainly not only – cause of our confusion is this set’s new Toshiba Places system.

Toshiba Places is the cosy name for Toshiba’s first proper stab at a ‘smart TV’ system. We’ve seen some half-hearted online efforts from the brand before, usually comprising nothing more than BBC iPlayer and YouTube support with no proper Toshiba ‘interface’ behind them. But Toshiba Places finally introduces a true ring-fenced content area accessed through a specially designed interface.

Why is this confusing? Because while Toshiba in Japan has had incredibly advanced Cell Regza multimedia TVs for the best part of two years now, here in the UK not only has Toshiba Places arrived late, but it also turns out to be clumsily put together and distinctly light on features. Odd. 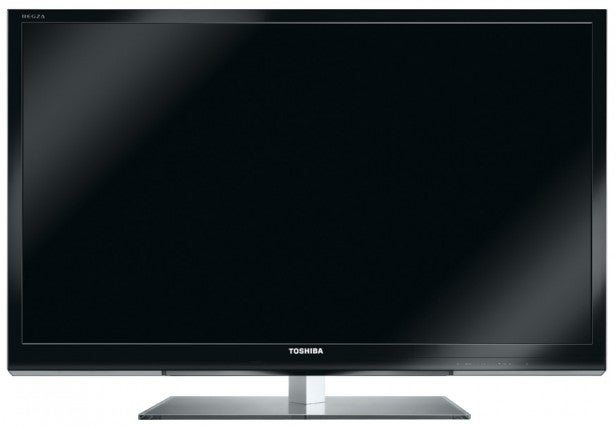 We’ll get into this in more detail presently. But first we’ve got some ‘scene setting’ to do. Starting with the 46UL863B’s looks, which are actually rather pleasant. The bezel around the 46in screen is impressively slender, very glossy, and offset prettily by a neat silver trim. Its rear end is pretty slim too – though in another bid to confuse the heck out of us, Toshiba doesn’t seem keen on you wall mounting its new set.

For a start, it arrives already attached to its stand. Also, during the TV’s initial setup routine it asks you if you’re wall-mounting it, but suggests that leaving it on its stand is the best option. Finally, the vast majority of its connections stick straight out of its rear, rather than being accessible from the set’s sides.

While the connections might not be very helpfully oriented, though, they are at least plentiful. Four HDMI sockets get the ball rolling, and there’s a real bounty of multimedia options including two USBs; a LAN port; and best of all, built-in Wi-Fi. There’s no need for one of those annoying – and often costly – Wi-Fi USB dongles here. Setting up the TV with your Wi-Fi router proves unnecessarily complicated, but so long as you stay calm you should get there in the end.

Another pleasant multimedia surprise is the fact that you can use one of the USB ports to record video from the digital tuners.

And yes, that wasn’t a typo: we did mean digital tuners plural. For the 46UL863B carries a digital satellite tuner as well as the much more predictable Freeview HD tuner. Once again, though, what initially looks like a good feature for the many people in the UK who still can’t get decent Freeview HD reception ultimately leaves us scratching our heads, as it turns out that the satellite tuner isn’t compatible with the Freesat ‘wrapping’. It just unhelpfully tunes in all the free to air stuff on the Astra 19.2 satellites, foreign language channels and all.

There are plenty of other features to explore, though. For instance, the set can be controlled by a new Toshiba TV remote control application now available for your iPad/iPhone/iPod Touch. It’s also got Toshiba’s Active Vision M100HD processing system, which combines general picture boosting algorithms with a genuine 100Hz refresh rate, plus there’s Toshiba’s Resolution system for adding sharpness.

The 46UL863B is Windows 7 approved and DLNA-enabled, allowing playback of photo, video and music files from networked PCs – and the same ‘flexibility’ is possible via the USBs. However, as with last year’s Toshiba TVs, the 46UL863B proves unable to handle nearly as many video file formats as we would expect. Again, this just doesn’t make sense coming from the brand that delivered Cell Regza and its Europe-bound CEVO engine spin-off.

The 46UL863B is rather more flexible when it comes to picture set up. There are a few presets, for starters, including day and night ‘Hollywood’ options, and a Hollywood Pro mode intended to emulate the results a professional installer might end up with.

If you fancy doing your own calibration, you’ll find a decent colour management system, an active backlight on/off toggle, a simple but effective black/white slider bar, and a fairly extensive static gamma adjustment range. Plus, most intriguingly of all, there are genuine colour/gamma calibration tools designed to work with an optional USB colour analyser pack Toshiba is supposed to be introducing.

None of these calibration packs was available at the time of writing, but in principal placing such in-depth calibration within reach of ‘normal’ end users seems a welcome move. 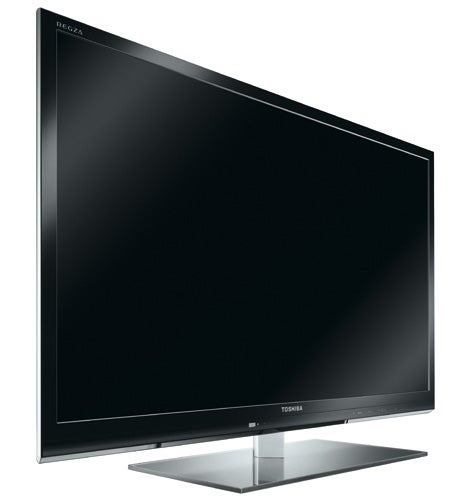 The potentially most popular innovation of the 46UL863B, though, is its motion and face detection system. A camera in the TV can spot if anyone is in the room and reduce the screen brightness if there isn’t, as well as being able to recognise up to four different faces, and automatically adjust accordingly the settings and account information in the Toshiba Places ‘area’.

Clever though all this sounds, the camera is of a pretty low quality, leading to fairly regular identification errors or failures, especially when the test room is either particularly bright or fairly dark. It is a feature that has potential, though.

As another sign of how the 46UL863 doesn’t follow all of its ideas through, though, the set doesn’t (currently, at least) carry Skype, even though this would seem a no-brainer given the presence of a built in camera.

The 46UL863B’s online features are actually pretty flimsy across the board. On the upside, the Toshiba Places interface is easy on the eye, and pretty well organised. Its attempt to offer a customised/personalised experience for each different user gives it a nifty point of difference too.

On the downside, bizarrely the BBC iPlayer and YouTube ‘apps’ aren’t included within the Toshiba Places menus. Or rather, if you select their icons from within Toshiba Places, you get a fussy list of onscreen instructions telling you that to access these features you have to exit Toshiba Places and select them separately from the previous, pre-Places menus. This is silly and lazy on Toshiba’s part, not to mention annoying.

The number of apps and features currently available through Places is surprisingly limited too. So far as video sources are concerned, beyond the YouTube and iPlayer options, there’s Daily Motion, Viewster, Woomi, Box Office 365, the Cartoon Network, and HiT Entertainment – the last three of which are subscription only. In other words, the amount of free video content available pales into insignificance besides some rivals – especially Sony.

There’s also a ‘Social Place’ area which sounds promising, but at the time of writing it only contained access to Flickr photo and Daily Motion video accounts, plus the ability to communicate with friends via email. The lack of Twitter and Facebook support is a big disappointment. They’ll doubtless arrive at some point, but they really should be there now given how late Toshiba already is with its online platform.

That’s pretty much it with regard to Toshiba Places content right now, moreover, with no sign at all of the extensive lists of smaller apps now common on some rival online TV platforms.

Moving on from the 46UL863B’s features to its picture quality and there’s rather less to say, for the bottom line is that its pictures are disappointing.

The main problem is backlight inconsistency. This troubled us with some of Toshiba’s 2010 models, but it appears our complaints have fallen on deaf ears. During some of the darkest scenes we threw at the 46UL863B, we almost felt like we were being forced to focus on just a central portion of the picture by a rough circle of extra greyness hanging over the rest of the picture. 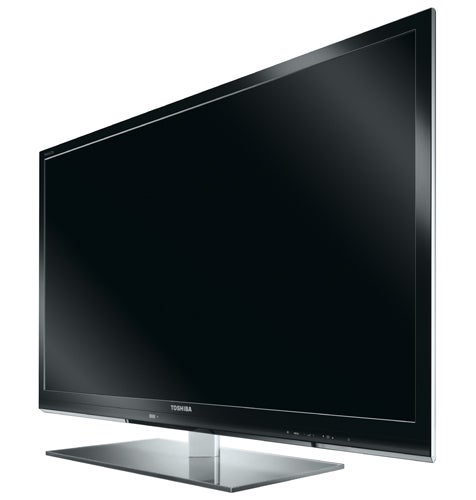 The problem is truly oppressive using any of the set’s relatively bright presets, but it’s frequently visible even when using an extra-darkened version of the already dull Hollywood Pro setting. Actually, the brightness inconsistencies at the edges of the picture are so extreme you can even see them when watching fairly bright scenes. And they get worse if you have to watch from any viewing angle greater than around 30 degrees.

To be honest, this problem instantly kills the 46UL863B for us as a potential home cinema set. But there’s another problem too, namely that its pictures look a bit soft, even when watching HD. The main reason for this is that the screen suffers with pretty noticeable motion blur that even activating the set’s 100Hz processing can’t entirely remove.

The set isn’t without its strengths. Its colours are punchy, capable of looking very accurate and subtly delineated, and devoid of noise. The Resolution system does a great job of upscaling standard definition sources as noted earlier too, provided you handle it with care. And the picture’s general preference for brightness and rich colours over black level response means that its pictures can look very easy on the eye with standard broadcast fodder like news broadcasts and chat shows.

The 46UL863B performed adequately during our input lag tests too, turning in an average of around 26ms (between extremes of 6ms and 40ms). Even at its 40ms peaks, though, the input lag shouldn’t be enough to really impact your gaming performance.

However, we’ve got yet another bit of bad news to finish with. For the 46UL863B’s audio proves to be painfully flimsy, delivering inadequate levels of power, an overcrowded and thin mid-range, precious little treble clarity, and worst of all, practically no bass whatsoever.

We started out feeling confused by the 46UL863B, and that feeling hasn’t reduced now we’re finished with it. Many of its key features promise much but ultimately feel only partially formed, and no amount of headline-grabbing ‘personalisation’ innovations can disguise the fact that Toshiba’s boffins would have been better employed figuring out how to make a better edge LED lighting system.