It would seem that 32in TVs are like the proverbial buses. As in, you don’t see any for months and then three come along at once. First we had the Sony 32HX753, immediately followed by the Panasonic L32ET5, and now today we’ve got what’s arguably the most interesting option of the lot, the Toshiba 32RL953.

The sudden flurry of activity in the 32in TV sector isn’t accidental. Sales figures show that it’s the most buoyant part of the TV market right now, presumably as more people are starting to snap 32in screens up as second-room TVs. 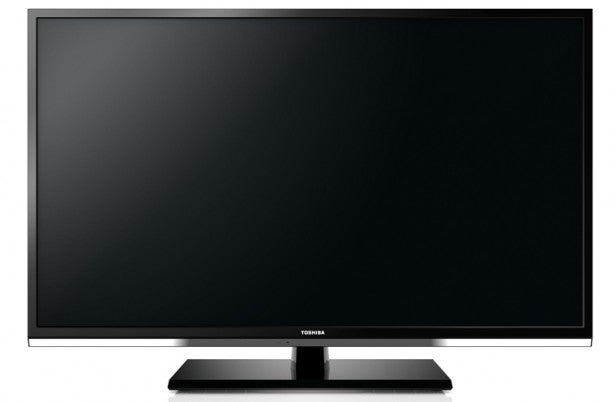 No silliness here
The 32RL953 sets about trying to convince us that it is anything but silly right away thanks to its strikingly pretty design. Instead of the bland, chunky bodywork we would expect to see at such a low price point, the 32RL953 enjoys a quite chic gloss black finish, applied to a bezel that’s only around 1.5cm wide around three edges. The bottom edge is wider, but only because Toshiba has added a fetching extra cm of see-through trim.

The 32RL953’s connectivity also exceeds expectations. Three HDMIs get the ball rolling, and they’re joined by a USB port able to play photo, music and video files (including DivX HD); a D-Sub PC port; and a LAN for jacking the TV into your network for either streaming from a DLNA PC or accessing Toshiba’s ‘Places’ online service.

It’s disappointing, perhaps, that Toshiba hasn’t included Wi-fi as standard in the 32RL953. But maybe we’re being a bit unreasonable here given how cheap the TV is. You can at least add Wi-Fi to the TV by coughing up around £35 for Toshiba’s WLM-20U2 USB Wi-Fi adaptor. 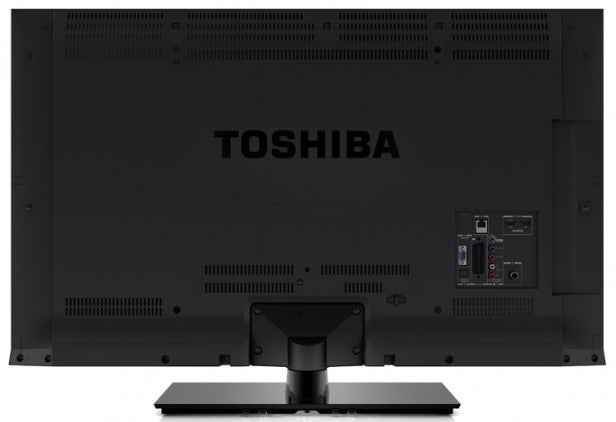 One other niggle about the connections is that many of them stick straight out of the TV’s rear, rather than being accessible from the side. This could be a problem if you’re looking for a TV to hang on a wall.

Friendly circles
Heading into the TV’s onscreen menus continues the good news. For starters, you get the same pretty and effective ‘concentric circles’ menu system that’s found on Toshiba’s higher-level TVs. Also, within the setup section you can find much more flexibility when it comes to calibrating pictures than you might expect from such an affordable TV.

For instance, unlike Panasonic’s LED TVs this year the 32RL953 allows you to adjust the backlight as well as the contrast and brightness settings.

Within an Advanced Picture Settings menu, meanwhile, you get to adjust the strength of the dynamic backlight system, the black/white level balance, and the degree of noise reduction being applied. There’s even a colour management system that lets you adjust the hue, saturation and brightness of the red, green, blue, yellow, magenta and cyan colour elements.

Before finding out if all these tools help the 32RL953 produce great pictures, let’s quickly have a look at Toshiba’s Places online system. It gets off to a great start thanks to one of the prettiest and most straightforwardly organised home menu screens around.  Also laudable are Toshiba’s efforts to offer a degree of personalisation to the system by supporting multiple settings, favourite lists and email accounts.

Wherefore are thou content?
However, it doesn’t take many moments exploring all the content on offer to realise that there just isn’t very much of it. The TV section, for instance, just carries the BBC iPlayer, the Cartoon Network, HiT Entertainment and Box Office 365 – the latter three of which are subscription-only services. 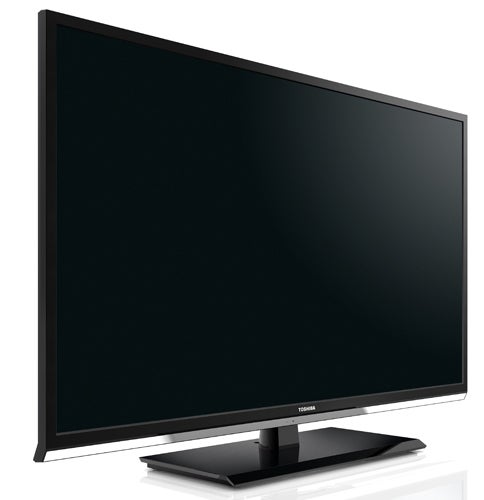 There are one or two other bits and bobs scattered around the other places, but overall there’s just no avoiding the fact that Toshiba Places is way off the online content pace being set by some of its major rivals.

Settling down to watch the 32RL953, its pictures immediately look nothing like as bad as we’d frankly expected them to. HD broadcasts look impressively dynamic, for instance, thanks to a combination of rich, punchy colours and what appears at this stage, at least, to be a much deeper black level response than is common at the budget LCD TV level.

Brightness issues
Pictures aren’t as bright as they might be from a more expensive set. Certainly Panasonic’s L32ET5 looked a bit brighter – though Sony’s 32HX753 looks around the same (or actually a bit duller once it’s calibrated to deliver a satisfying black level response). There’s still enough light coming out of the Toshiba, though, to enable it to work in all but the most consistently bright living spaces.

We have certainly seen other more expensive TVs make HD sources look sharper and more detailed than the 32RL953 does. But the difference between standard def and HD content is always perfectly clear despite the 32RL953‘s relatively small screen size, and we certainly would never describe HD pictures as looking in any way soft. 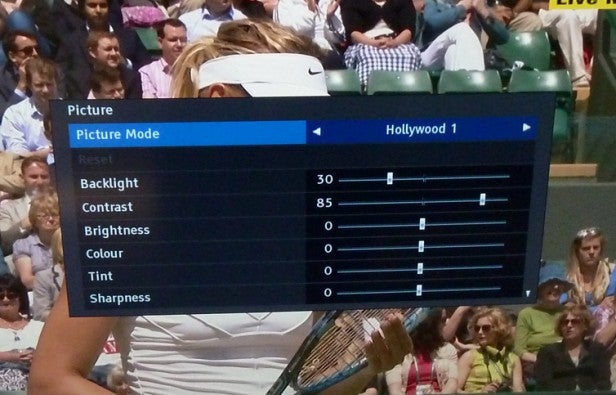 Helping the 32RL953 out in this regard is the fact that it handles motion considerably better than expected. There is – inevitably – a bit of resolution loss when the screen is showing horizontal motion, but the onboard 100Hz system ensures that this is not as big an issue as it usually is on budget TVs. There’s certainly no sign of the smearing that we might have expected to find on a sub-£350 32in TV.

Standard definition
Turning to standard definition, the 32RL953 isn’t so assured – at least with relatively low quality digital broadcasts. With this sort of material, the step-down in quality is a little more obvious than we’d like it to be, in terms of the amount of extra noise that materialises and the amount of extra softness – especially over particularly bright areas of the picture. Clearly the 32RL953’s upscaling system isn’t one of Toshiba’s most powerful efforts.

But then it wouldn’t be reasonable to expect anything else on a sub-£350 32in TV, would it? In any case, the relatively small screen size makes the standard def problems much less obvious than they were on this set’s 40in sibling (the Toshiba 40RL953).

The one part of the 32RL953’s picture make up we haven’t put through its paces fully yet is its black level response – so often a point of weakness for budget LCD TVs. But while the 32RL953 isn’t perfect in this area, nor is it anywhere near as bad as it could – maybe even should! – have been.

Using either of the TV’s Hollywood picture presets with a couple of our favourite ‘dark’ test Blu-rays (Casino Royale and, especially, the final Harry Potter film), we were instantly struck by just how deep the 32RL953 can go with its black level response without – and this is crucial – crushing out too much shadow detail.

Well balanced black levels
This combination of deep blacks and retained shadow detail is a really tough balance for any small, edge LED TV to strike, so to see it handled so well by the 32RL953 is borderline miraculous. Especially when you compare it – as we did – directly with the very grey-looking blacks of the Panasonic L32ET5 and the rather forced, hollow blacks of the Sony 32HX753. Two TVs which, as noted earlier, cost way more than this Toshiba does. 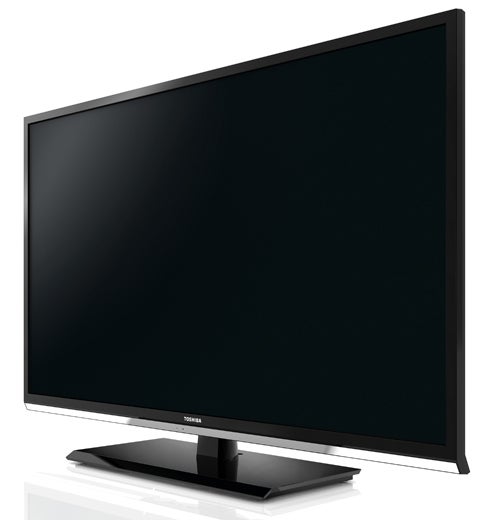 The 32RL953 does sacrifice quite a bit of brightness punch in delivering its extremely credible black levels, but this isn’t a big deal so long as you can mute the ambient light levels in your room a bit when watching films.

Also great to see when watching the 32RL953 while using its Hollywood presets is the impressive stability of dark scenes, which suffer none of the distracting brightness ‘leaps’ witnessed on a few recent LCD TVs we’ve tested.

Minor consistency flaws
Aside from the slight underlying lack of brightness, the only fault we can level at the 32RL953’s handling of dark scenes is that you can make out a few ‘clouds’ of gentle inconsistency at times – clouds that increase in intensity if you try to ramp up the set’s backlight level too much when watching films.

Keep the backlight and brightness settings reasonably low, though, and the clouding’s impact on your viewing can be considered pretty minimal. Certainly it’s far less intrusive than you would expect to find with such a crazily affordable 32in TV using edge LED lighting. 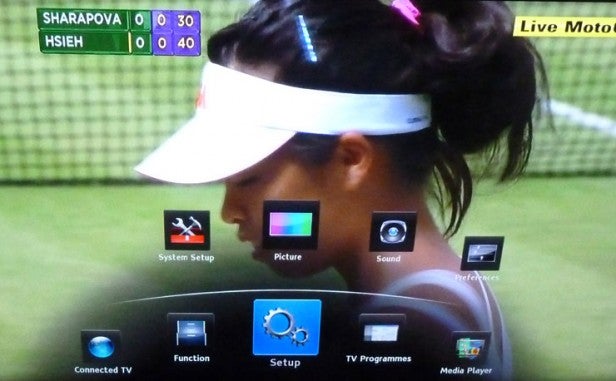 Any 32in TV has a good chance of being used as a gaming monitor at some point. So it’s great to find that the 32RL953 suffers with just 38ms of input lag when using its Game preset – a decently low figure that shouldn’t seriously muck up your gaming skills.

Having considerably outperformed its price point with its pictures, the 32RL953 gets a bit closer to its budget level sonically. The mid-range sounds compressed, leading to a slightly harsh sensation with upper and upper-mid sounds, and a rather flat experience when watching action films. Bass is in short supply too. But for all this the 32RL953’s audio can be considered serviceable, which is good enough when you’re talking about such a cheap model.

Verdict
In an ideal/impossible world, the 32RL953 would have better sound, a more content-rich online service, and better standard definition pictures. But of course, we live in a world of harsh financial realities, especially at the moment. And in this world of financially motivated compromise, the 32RL953 is a bargain of colossal proportions that leaves almost all similarly priced rivals looking shambolic by comparison.