With its 32-inch screen, built-in DVD player, roster of Smart TV services and aggressive £340 price, the 32D3454DB has its sights firmly aimed at the UK’s currently TV-less kitchens, studies, bedrooms and conservatories. 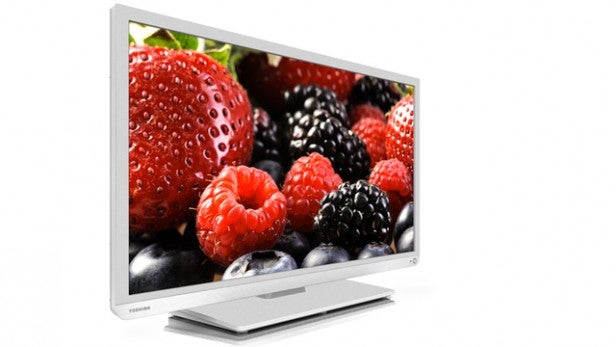 For some reason, apparently UK TV buyers don’t like white. Research shows that our German friends love a bit of white telly action, but for us notoriously conservative Brits it seems it’s black, grey or nothing.

Toshiba is out to change this dull state of affairs with the Toshiba 32D3454DB, though. For the somewhat chunky frame around the screen is unmistakably, uncompromisingly white, with a gentle glossy sheen to the bottom edge underlining the set’s unabashed whiteness. Oh, and the desktop stand’s white too. And you know what? Despite being 100% British, we like it. Not least because the white finish does a better job of disguising the plasticky build quality than the usual black and silver finishes do.

If you just can’t bring yourself to buy a white TV under any circumstances though, don’t worry: Toshiba also offers a black version of the 32D3454DB called the 32D3453DB.

The set’s rather large posterior is explained by the fact that it’s here you find the built-in DVD player. The big butt is not, thankfully, a sign that the TV is using old-school single backlight LCD technology. Despite its affordable second-room focus it still uses edge LED lighting, although the main advantage of that technology is a simmer profile so the point is somewhat moot.

Connectivity is good for a set like the Toshiba 32D3454DB. Alongside two HDMIs and a Scart you can find a USB input, a component video input, a composite video input, a D-Sub PC port, a coaxial digital audio output, an RF input that happily feeds an HD Freeview tuner, and best of all both LAN and integrated Wi-Fi network connections. 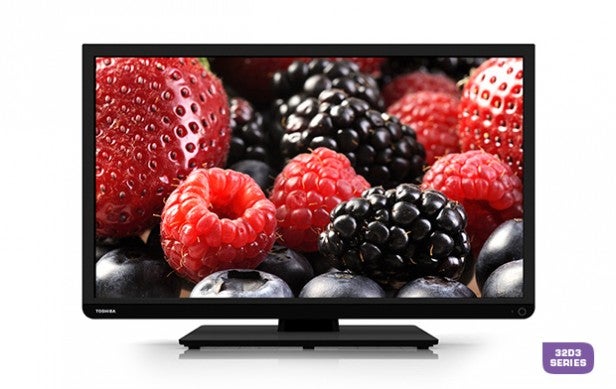 These network options support not just DLNA streaming from networked PCs but also, impressively, access to a reduced version of Toshiba’s online Cloud TV service, offering you access to such video streaming services as Netflix, the BBC iPlayer, BBC News, YouTube and Viewster.

Accessing and using the Cloud TV services is a painfully slow process at times, however. You don’t get the social media and ‘recommendations’ features found on Toshiba’s higher-end Cloud TVs and it’s a pity there’s no LoveFilm/Amazon Prime support, or ITV Player, 4OD and Demand 5 catch up TV apps. But still, it’s hard to complain when finding ANY online services on such an affordable 32 inch TV can be considered a bonus.

The 32D3454DB’s onscreen menus contain more features than might have been expected for its market position too. There’s a decent selection of themed picture presets, a series of backlight settings, a noise reduction system, an optional dynamic contrast system, a skin tone adjustment, and even a rudimentary colour management system comprising a simple red-to-green sliding bar and RGB gain controls.

The one obvious limitation to the 32D3454DB’s specification is that it’s not a full HD screen; its pixel count is an HD Ready 1366×768. But we wouldn’t consider this a deal breaker on a 32-inch screen likely destined for a second room. 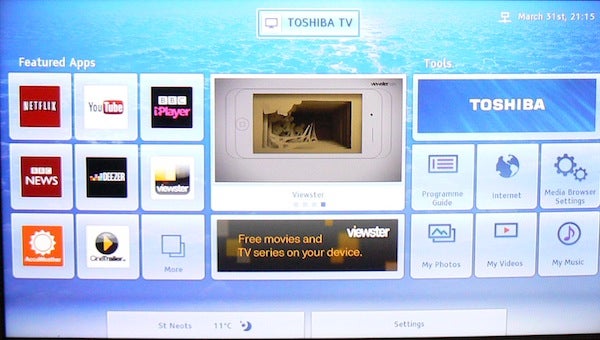 The 32D3454DB’s initial set up phase is a bit cumbersome, simply because the onscreen menus run so sluggishly. But it’s also fairly comprehensive and easy to follow, so as long as you’re patient you’ll be fine.
Getting the best out of the 32D3454DB’s pictures depends on a few fairly straightforward adjustments.

We’d recommend: leaving the noise reduction system on low for standard definition sources but off for HD; avoiding the auto Backlight setting instead setting the backlight to its Medium setting; and making sure the contrast setting sits around the 47-50 level to suppress noise.