Like the GO 500 and premium TomTom GO 6000, the GO 600 sports the completely redesigned new TomTom interface. The default screen is a 2D map, showing traffic issues if the data is available. In previous TomToms, touching the map called up the menu, but now you use finger gestures to navigate the map and multi-touch to zoom. So, instead, an inconspicuous circle with three dots in it has become the button to display the menu.

The menu itself is totally different from before, too. Instead of the previous grid of icons, now there is a simple row, and there are far fewer icons as well. Some of this is because functions have been combined, with the Search button bringing together address and points of interest databases into one place. The keyword search operates across both, with a results screen that shows addresses on the left and points of interest on the right. 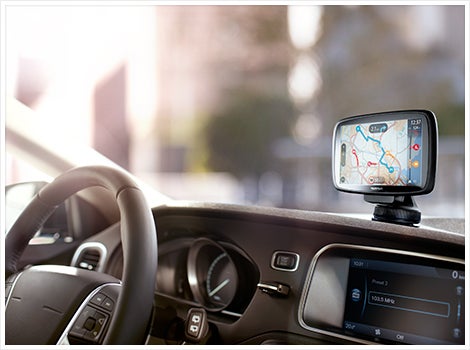 The points of interest listing includes places that match the keyword spelling, but also categories and subcategories that do too. This is in fact the only way to get to most of the POI categories, as there are only icons for Parking and Petrol Stations in the main menu. At first this feels like a limitation, but typing in the appropriate category is pretty rapid, although you do need to know the right word – “food”, for example, doesn’t bring up restaurants or supermarkets, instead providing a list of nearby shops with “food” in the title.

The sat-nav has lost some useful features in this radical change. There is no online weather forecast available, and no online local search either. The latter is a bit of a shame, as the previously included Google Local Search could be pretty effective at finding destinations that weren’t in the POI database, although the TomTom Places that replaced it last year hasn’t proven quite so capable.

The navigational experience is slightly different, too. Gone is the information bar that was traditionally at the bottom of the screen. You do still get a reading of your current speed at the bottom, with the next turn you have to make at the top. But the rest of the important information has been moved to the right-hand-side into a feature TomTom calls the Route Bar.

The Route Bar now incorporates the estimated time of arrival and distance to destination at the top, and then a vertical strip beneath that shows either your distance to forthcoming traffic issues and how much delay they will cause, or details of a speed camera that you are currently approaching. The latter counts down and illustrates graphically as you get closer, as well as illustrating the limit, with colours representing whether you are above it.

The navigational map itself is rather minimal in its use of colour, but still extremely clear. The maps also include 3D models of important landmarks to aid orientation, so in theory you will see a model of Wembley Stadium on the sat-nav as its arch appears in the actual view through your windscreen. But we have never been convinced that this feature is essential to successful navigation. 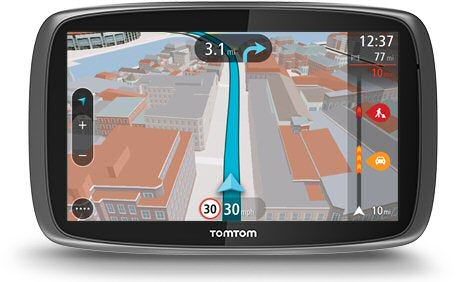 If you want a huge 6-inch sat-nav with TomTom’s excellent Traffic service, but don’t fancy the £70 or so premium for the TomTom GO 6000 with its integrated mobile data connection, the GO 600 gives you most of the same features for considerably less. However, the TomTom GO 500 and 400 reduce the price still further, with the only downside being smaller screens, so they are more economical if you don’t need a massive screen.

The TomTom GO 600 gives you lifetime access to TomTom’s Traffic, which remains the benchmark in jam detection and avoidance, but you may want to eschew the 6-inch version in favour of the smaller GO 500 or 400, and save your pennies.