Despite the success of last year’s Game of Thrones and Tales from the Borderlands first seasons, the two seasons of The Walking Dead remain Telltale’s finest work. As a result, there are high expectations for this new three-parter, particularly since it’s the first to focus on an established favourite from the comic books and TV series; the katana-wielding badass Michonne.

The good news is that these expectations are mostly met with a first episode that plays to Telltale’s strengths. The bad news is that it suffers from the exact pitfalls that have bedevilled most of Telltale’s recent work.

I think that if you love The Walking Dead and Telltale’s games, you’ll feel that Michonne gets off to a pretty good start. If you’re growing tired of the formula and its weaknesses – of seeing phrases such as “Randall will remember that” – then Michonne isn’t going to change your mind. 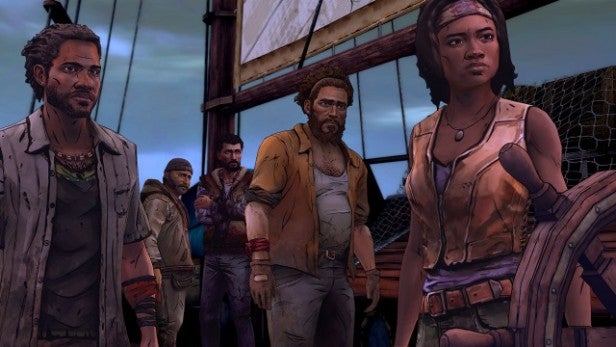 The series takes place quite late in the comic book’s arc, following Michonne’s disappearance from The Kingdom. It finds our heroine haunted by her history and in the grip of madness and despair, before falling in with a new bunch of survivors on a ship, The Companion.

There are tensions on board, of course, but things really go south when the ship stops to investigate a radio message. Enter new potential allies, vicious new enemies and a whole bunch of walkers in the way.

Telltale knows what it’s doing here, leading you through a series of scenes that ratchet up the tension, release it in a burst of horror, while asking you to make meaningful choices. As in all its games since the first Walking Dead, puzzles take a back seat to dialogue. You choose what to say and what to withhold, with each decision affecting how the other characters will see you.

Do you play it tough, lie, tell the truth or try to calm down situations? Is it better to play along with those who have the power to hurt you, or spit in the face of their threats and ultimatums? With every line you pick or choice you make, you’re steering the plot and – inevitably – creating dire consequences for someone in the cast. When it comes to the writing, the performances and cinematics, Telltale is only getting better with time. Michonne, played by Orange is the New Black’s Samira Wiley, mixes cold, sometimes brutally efficient pragmatism with flashes of warmth and humanity. The rest of the voice cast does a lot with some well-written, understated dialogue.

The cel-shaded visuals are growing more detailed, the cutting and camera-work is excellent, and the animation seems to have lost some of the awkward, stilted quality we saw in Game of Thrones.

And while it’s easy to turn the investigation of an abandoned ship into a high-suspense set piece, it isn’t so easy to do the same with a conversation. Michonne is at its best when words mean life or death for your fellow survivors, and you come to agonise over every last decision. Here the best scenes simmer with the threat of violence, always poised to bubble up with just a little more heat.

Unfortunately, Telltale’s usual problem soon kicks in: player agency. While you can believe that your decisions matter, there isn’t much else to engage the brain. What puzzles there are turn out to be pitifully simple. Every action scene is a quick-time event.

As in Game of Thrones, the idea seems to be that pressing buttons when prompted is a strong way to simulate a character’s expertise in combat, but in fact these scenes just feel like obstacles between you and the next dialogue scene. 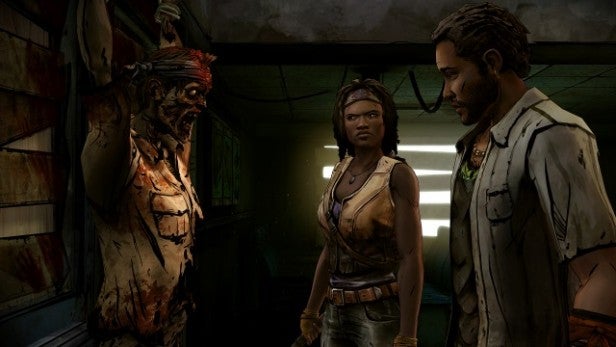 To make things worse, the first episode is particularly short. I clocked it in a little over two hours, despite repeating a handful of the action scenes. That’s below par for Telltale episodes, and while the ending is a cliffhanger, it feels abrupt.

With the whole season costing £11,99 that’s no disaster, but if you can tackle the lot in less than six hours we’d have to ask why there are three episodes? In fact, why not just make it a standalone game?

There remains enough rotting flesh on mobile bones here to hook fans of Telltale and The Walking Dead alike, and a handful of great scenes make it all worthwhile. If you want to learn more about Michonne and what motivates her, no other tale in another medium goes so far.

All the same, you can’t help but feel that Telltale needs to do more to stop its interactive drama formula growing stale, and that it’s time to take the genre somewhere new. Michonne is a good first episode for another Telltale drama, but wouldn’t it be nice if we swapped good for great?